With one of its new models, the company fixed the biggest issues with its true wireless earbuds.

In 2018, Master & Dynamic joined the true wireless fray. The company had been making headphones for years, including a number of wireless models, but it had yet to jump on the latest earbud bandwagon. With the MW07, M&D was able to bring its trademark sound to a new niche, but that model had some key issues. Battery life was abysmal compared to the competition, and the Bluetooth range wasn't great. The company fixed both of those problems with the MW07 Plus, and added active noise cancellation (ANC) and increased water resistance to meet IPX5 standards. And it did all of that while keeping the price at $299.

On the outside, the MW07 Plus looks identical to the MW07. Even the case is still made of shiny stainless steel. There are some new options when it comes to the acetate shells, but the cosmetic changes are pretty minor. Master & Dynamic kept the optional silicone Fit Wings, which help the earbuds stay in place, and the location of the on-board controls is consistent with the first model. There are two new mics, one on each earbud, along the top ridge. On the backside, the company added a third charging contact. Those are really the only noticeable exterior changes, and they're very subtle.

On the left earbud, there's a volume rocker that also controls the noise cancellation mode. If you hold volume up, you can turn ambient sound on/off. Ditto for the volume down and ANC. The right earbud houses a single multi-function button that handles play/pause (single press), skipping tracks forward (double press) and skipping tracks backward (triple press). If you hold down this button, you can summon the voice assistant of your choice. 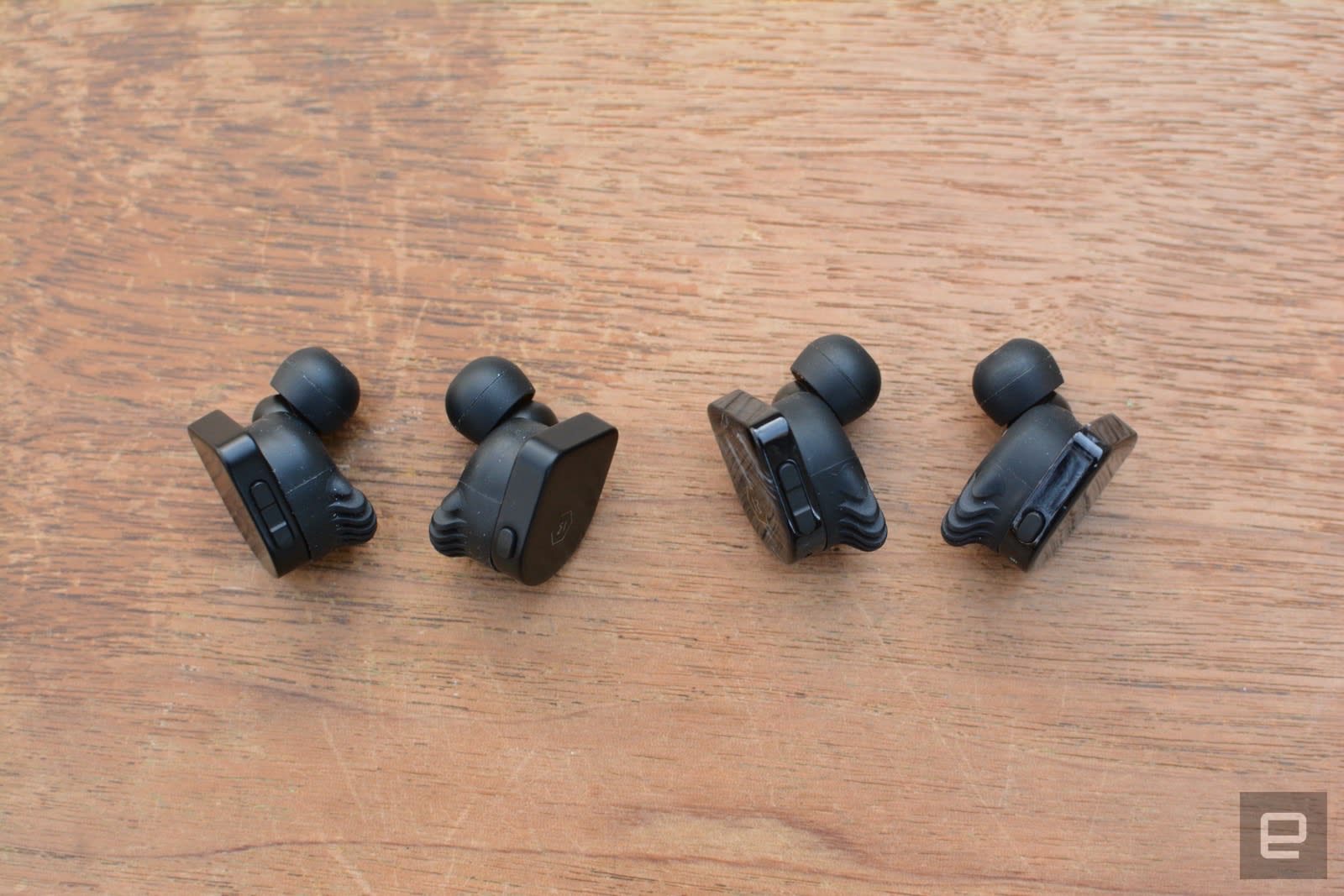 Turn on browser notifications to receive breaking news alerts from Engadget
You can disable notifications at any time in your settings menu.
Not now
The MW07 vs. the MW07 Plus

On the charging case, those informative LED indicators from the MW07 are back as well. The three lights will give you a ballpark figure on battery level for the individual earbuds (outer lights) and the case (middle light). Green is high (70 to 100 percent), orange is medium (30 to 69 percent) and red is low (1 to 29 percent). When the center light flashes red, the case's battery has run out completely. Those indicators are pretty broad, but at least you have some idea where you stand when you tuck the earbuds into the case and close it.

The biggest changes for the MW07 Plus are upgrades you don't see. First, and most importantly, battery life is up to 10 hours on a charge. That's more than double the disappointing 3.5 hours of the MW07, and it's actually above average compared to the competition. The case also packs more power than the previous model, offering three full charges in addition to what the earbuds themselves can hold. In total, you're looking at 40 hours of listening time (up from 14 hours). Ten hours is more than enough to get you through a full workday of continuous use. However, I'll bet that you're going to dock these in the case at some point, so battery won't ever be a concern. I'm on a week and a half of what I'd consider regular use -- two to three hours of music and podcasts a day with a few short calls in between -- and there's still juice left in the case to replenish the buds when I take a break.

Secondly, wireless range is also much better on the MW07 Plus. The company upgraded the Bluetooth from 4.2 to 5.0 on this new model. With the MW07, I could barely even make it out of the room before experiencing a stutter or dropout. I'm now able to wander around my entire house, and I only have an issue when my device and I are at extreme opposite ends of the building. Basically, I can get up from my computer in my home office and make coffee in the kitchen or let my dog out and use the MW07 Plus without interruption. That wasn't the case with the MW07.

As I briefly mentioned, Master & Dynamic also added active noise cancellation to the MW07 Plus. It's not the type of "kill all noise" ANC you get from the likes of Sony, Bose and others. But it does offer better insulation from your surroundings than passive noise isolation earbuds can muster just by being stuck in your ears. Ambient sound mode is a standard feature on most wireless earbuds these days, but it's handy and worth calling out. On the MW07 Plus, voice prompts let you know when you've turned ambient sound and ANC on/off.

Master & Dynamic has been consistent with sound quality over the years. The company opts for a more "natural" profile, rather than tuning its headphones to accentuate low-end tone or any other frequencies. It doesn't provide a companion app where you can tweak the EQ or employ a collection of audio presets, so you have to really like that "natural" tone the company champions. As a person who tests a lot of headphones, I find M&D's tuning a welcome respite. And because the sound is well-rounded, it handles all genres with ease. Plus, there's good clarity, so even subtle instrumentation that's easily lost on a lot of earbuds -- grungy textures of distortion, for example -- comes through clearly.

Sure, I'd like a little more depth to the bass when I'm blasting Gojira's chugging metal riffs or Sylvan Esso's dancy electronic beats. But I'll trade overpowering and boomy with muddy low-end or painful treble for this any day. The even-handed approach means that you get consistently good sound whether you're listening to hip-hop or bluegrass. And trust me, Punch Brothers is much more enjoyable when the upright bass doesn't overpower the other virtuosos in the band. 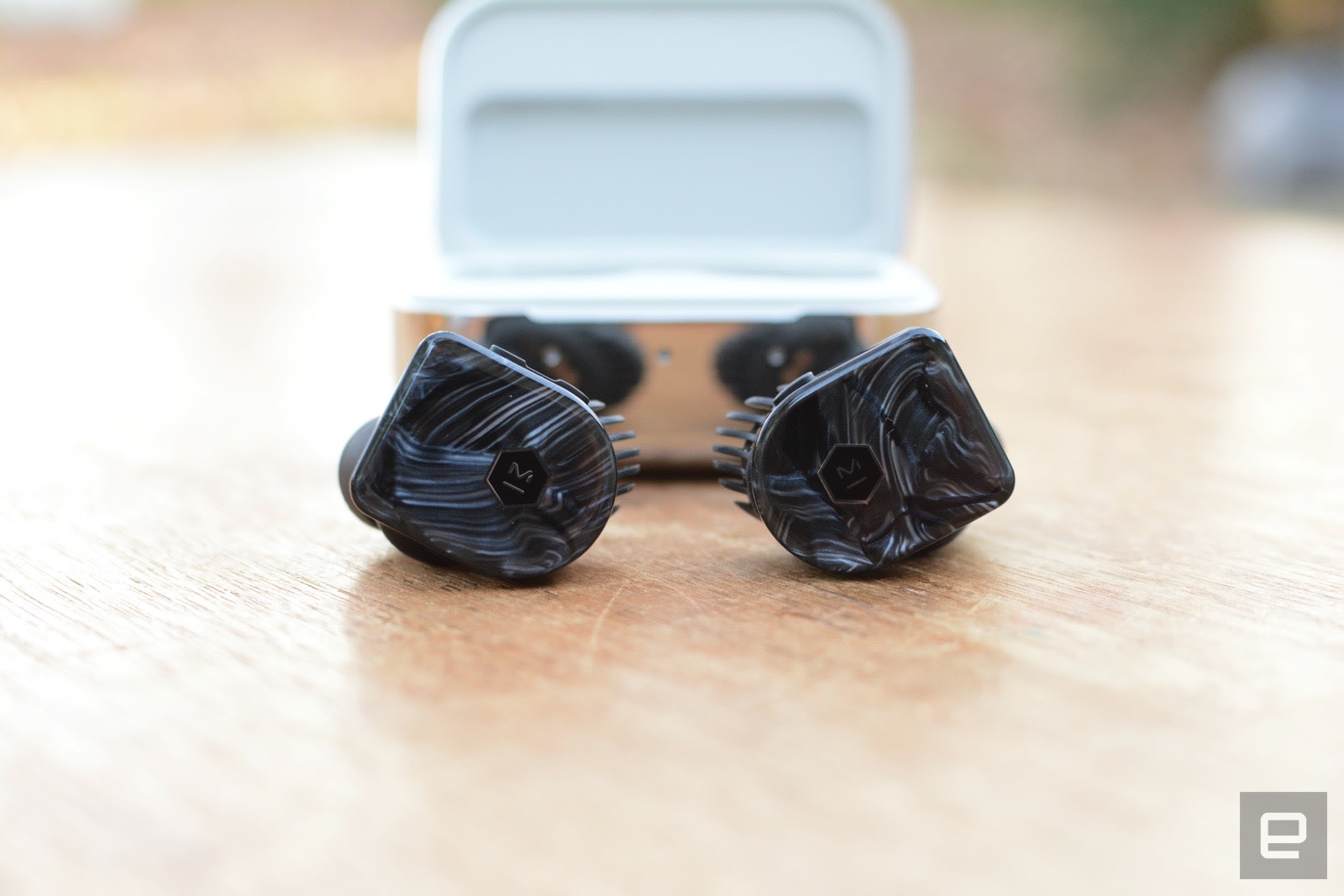 At $299, the MW07 Plus are firmly in the premium price range for true wireless earbuds. There are plenty of other flagship models, and there are better all-around options available for significantly less. Sony's WF-1000XM3 are still my top pick at $230, and they've already been on sale for under $200 this holiday season. The mix of stellar sound, powerful adaptive ANC and customization makes these easy to recommend. The battery life on the earbuds themselves is average, and the touch controls are limited, but the good certainly outweighs those caveats. The AirPods Pro, which also pack noise cancellation, are also a solid alternative at $249, if you can live with the polarizing design. Master & Dynamic is still selling the MW07, with a $50 price cut. But honestly, saving $50 is not worth the compromises you'll have to make.

Kudos to Master & Dynamic for realizing the shortcomings of the original MW07 and working quickly to fix those issues in the next model. The MW07 Plus are a much improved product thanks to longer battery life and the addition of active noise cancellation. The sound profile won't appease those who crave lots of low end, but it isn't overly tuned, which makes it versatile enough for all genres. M&D's earbuds lack the customization in controls, EQ and noise cancellation that much of the competition offers. Wireless charging isn't a standard feature yet, but it is becoming more common, so it would've been nice to see here. The MW07 Plus are some of the best-sounding earbuds you'll find right now, and at the end of the day, that's arguably the most important thing.

All products recommended by Engadget are selected by our editorial team, independent of our parent company. Some of our stories include affiliate links. If you buy something through one of these links, we may earn an affiliate commission. All prices are correct at the time of publishing.
Master & Dynamic MW07 Plus review: Improved, but still pricey
audio
earbuds
gadgetry
gadgets
gear
headphones
master & dynamic
master and dynamic
mw07 plus
review
true wireless
true wireless earbuds
wearables
wireless earbuds