If you’re worried about constantly having to recharge, these might be for you.

Now that companies are on at least their second or third generation of true wireless earbuds, many of them are worth recommendations. A lot of these new models address earlier issues like poor battery life, connectivity issues and subpar sound quality. Thankfully, some companies have introduced more affordable options that will cost you less than $250 -- and in a lot of cases, less than $200.

In 2018, Audio-Technica debuted its first true wireless model, the ATH-CKR7TW. Those earbuds lasted six hours on a charge and were priced at $249. This year, the company took things a step further with the ATH-CKS5TW ($169). Not only are they more affordable, but they offer more than double the battery life: 15 hours on the earbuds alone. There are some caveats, but at that price, are Audio-Technica's latest earbuds too good to pass up?

The design of the ATH-CKS5TW is an evolution of the previous model. The aesthetics are similar, with a mix of matte plastic and metallic accents. However, for the ATH-CKS5TW, the buds are circular, coming to a point at the back edge. This design element forms a small flat area where the charging connectors are located. Up top, there's a single button on each earbud near the front, and microphones on the bottom. There are also removable "3D loops" or wings to help keep each earbud in place. Those only come in one size, though, so they may not work for you. Like most of the competition, Audio-Technica included four sizes of silicone tips so that you have some options for finding the best fit.

The earbuds themselves are big. Going from the Jabra Elite 75t to these is a massive increase in overall size. They're also thicker, and the arm/extension that goes into your ear is slightly longer than some models I've tested. All of this combines for one thing you don't want in your true wireless earbuds: to have them stick out from your head like some sort of weird antennae. 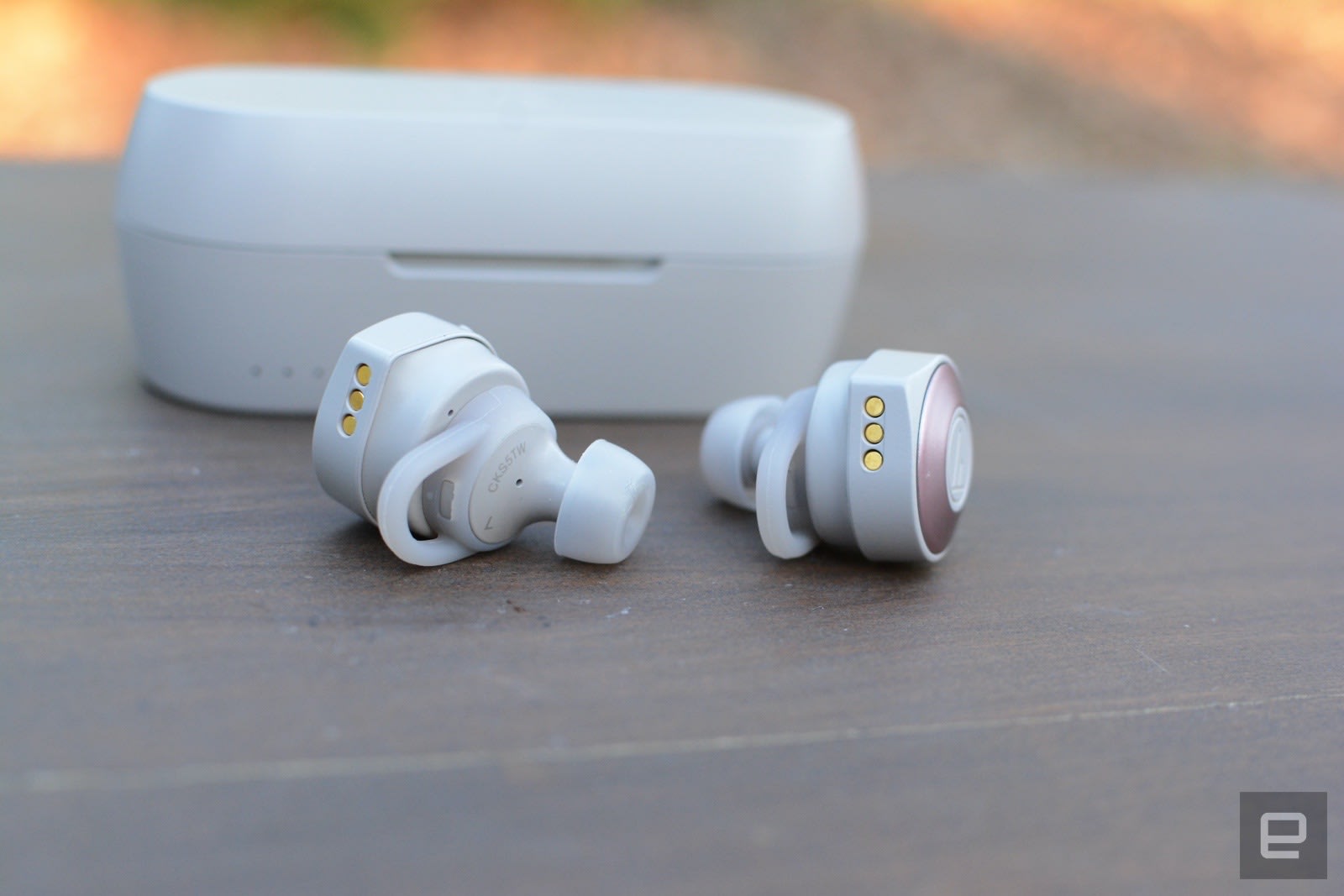 The included charging case isn't the smallest I've seen, but it's not unnecessarily large either. It's still small enough that you could easily tuck it in nearly any pocket. Plus, three LEDs on the front give you a ballpark figure of how much battery is left in the case. Audio-Technica doesn't specify a percentage range for each light, but hey, it's better than nothing. The case also charges with USB-C, because it's almost 2020 and that's the way things should be.

The formula is slightly different from other earbuds I've tested, but it didn't take me long to get the hang of it. Plus, the controls work well, so Audio-Technica saved me the frustration of fighting with the buds every time I want to make an adjustment. The only issue is there's no way to summon a virtual assistant on the ATH-CKS5TW. If you want to do that, you'll have to reach for your phone, or have a hands-free feature activated -- not to mention your connected device within shouting distance. 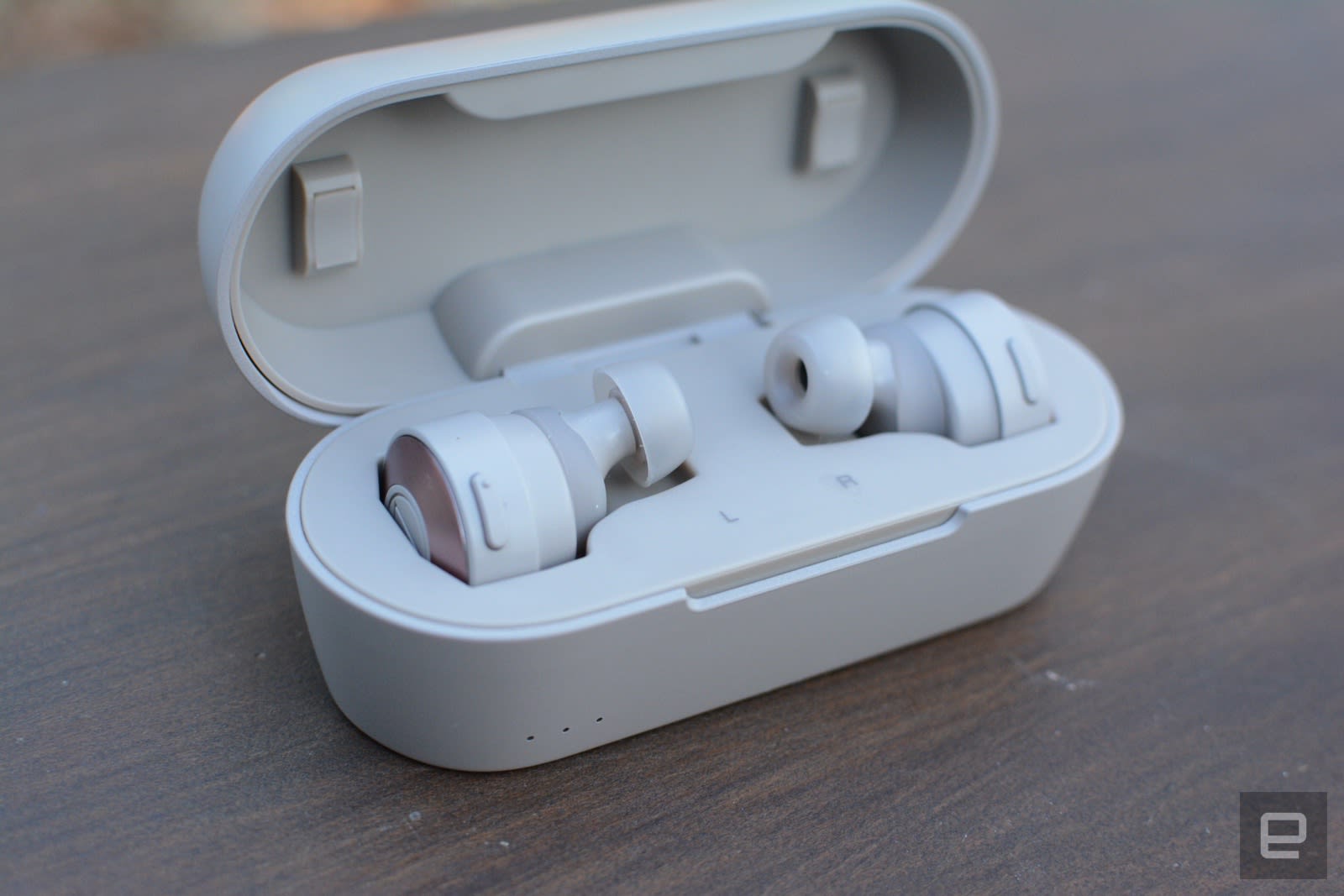 Another key feature the ATH-CKS5TW lacks is automatic pausing. A number of true wireless models omit this still, especially ones that cost less than $200. It's not a deal-breaker, but if you're like me and used to having it, the omission can get annoying quickly. You can't simply remove one bud and have a conversation, unless you're content to speak over whatever is still playing in your ear. Transparency mode? That's missing here, too. What's more, these earbuds don't turn off after a period of inactivity. They will, at least, automatically disconnect after you put them in the case.

Audio-Technica does have a companion app for its wireless headphones, but the software is extremely limited. Basically, it offers media controls for whatever you're listening to alongside battery percentage for the earbuds and the audio codec that's active (AAC or SBC). When it comes to settings, you can choose to have the earbuds automatically select that codec or specify one or the other. The only option for customizing the on-board controls is to switch them wholesale from one side to the other -- which might be helpful if you're left-handed. You can also turn voice prompts off if you find that sort of thing to be annoying. And that's it, aside from the product guide that gives you the lay of the land. 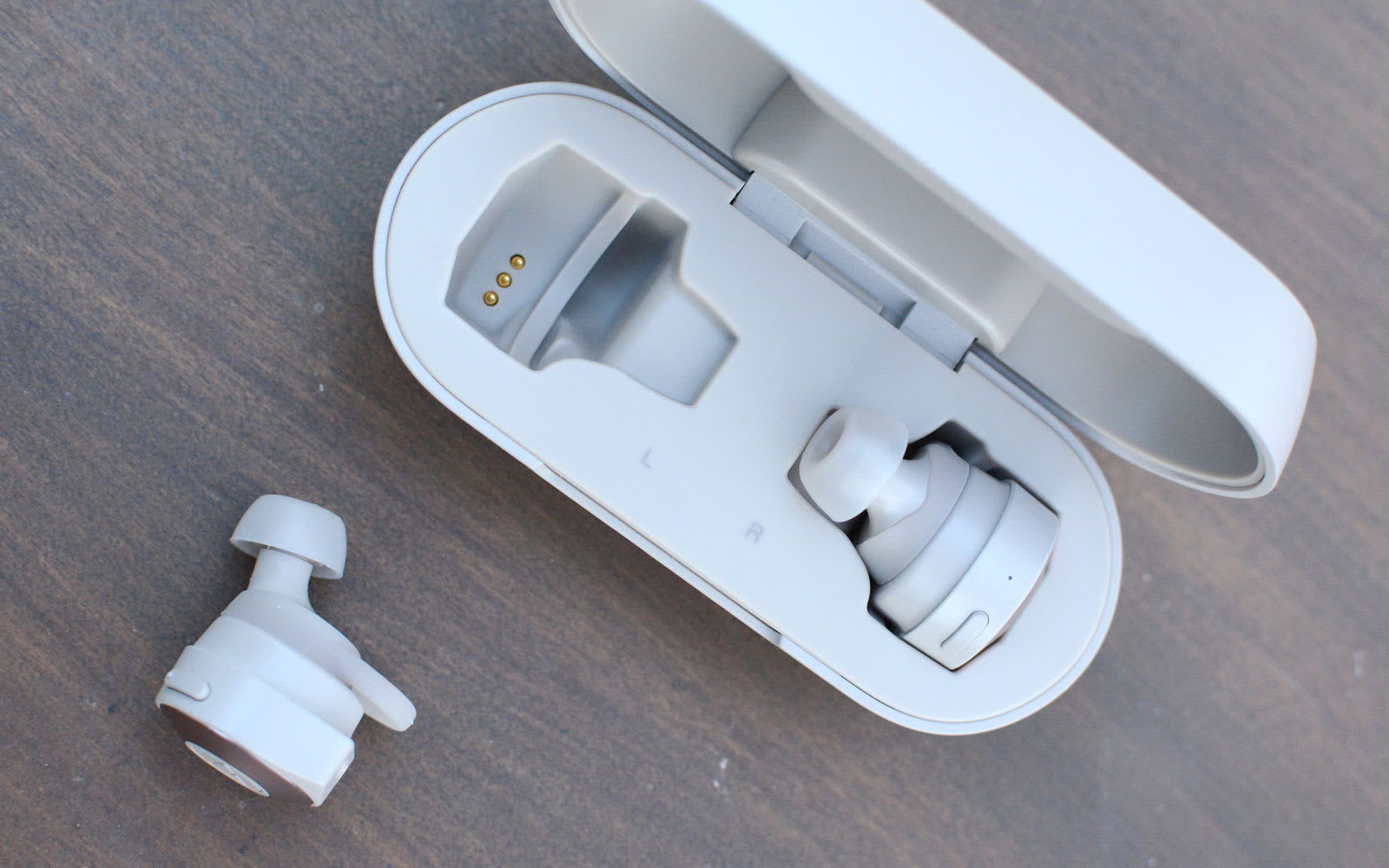 The app is so limited that basically the only thing I used it for was to download software updates and check the battery percentage on the earbuds. The update process is more labor intensive than with other models I've tested. Most of them just require you to leave the buds alone for a few minutes, either in the case or out. The initial update for the ATH-CKS5TW went like this: I put the buds in the case, triple clicked on the left earbud, removed the left earbud from the case, paired my phone to an alternate device name, loaded the update and put it back in the case. Then I had to do essentially the same thing on the right, along with pairing my phone back to the original ATH-CKS5TW device name in my Bluetooth settings, putting the right earbud back in the case, closing the lid and opening it to use them again. Audio-Technica says this can take up to an hour, but I managed to get it done in around 25 minutes. Not an eternity, but that's definitely the most steps I've ever had to complete for an earbud update. Thankfully, I've only had to do it once.

That all sounds damning, but it's not all bad. And one thing might outweigh all of those caveats: 15 hours of battery life. Indeed, that figure is the best of any earbuds I've tested this year. Audio-Techinca promises 15 hours on the earbuds themselves with two full charges in the case for 45 hours total. With just the buds, that's more than you'll likely need for any extended listening session, or even a long flight.

I kept them in for six hours straight on a workday during my review, and when I took them out, the app was still showing 85 percent battery left. That's pretty absurd for that amount of time with a mix of music and calls. In terms of a battery rundown test, there was 40 percent battery left at the 15-hour mark according to the app. Assuming that's a reliable indicator, the ATH-CKS5TW vastly outperforms the figure Audio-Technica proclaims. 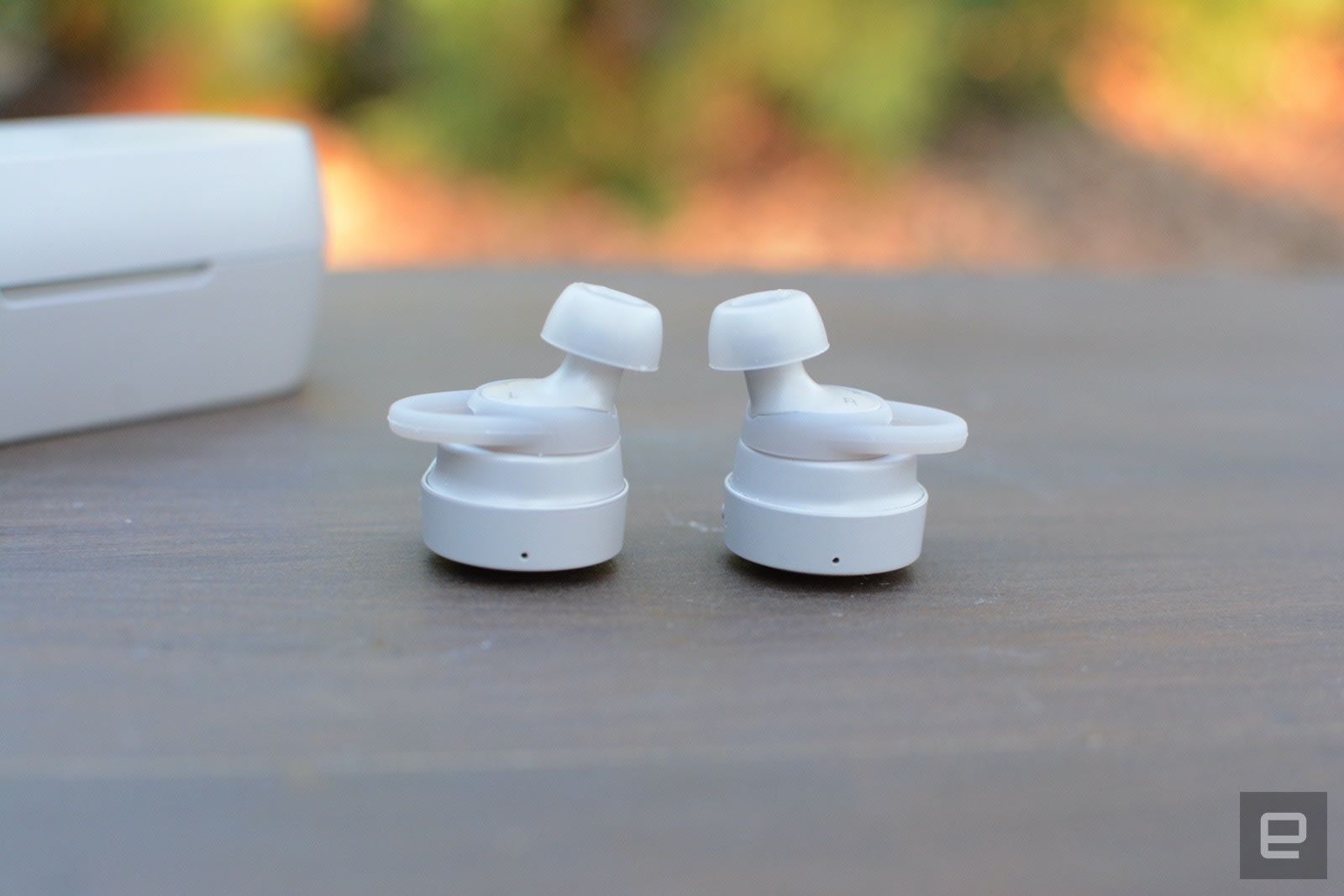 The audio quality is... fine. Like Master & Dynamic, Audio-Technica has a trademark sound that's mostly consistent across devices. It's not as "natural" as M&D's default tuning, as there's slightly more depth to things. However, I don't like the audio as much on the the ATH-CKS5TW. Sony, M&D and other earbuds I've tested recently also beat the ATH-CKS5TW when it comes to overall clarity and default tuning. Those have more bass, but it muddies the sound. There's still some decent detail in instruments and other elements, but the low-end tone is big and boomy. With KAYTRANADA's BUBBA, for example, the bassline of tracks like "2 The Music" is so bass-heavy that it throws the entire mix off. The rapid bass drum rhythm throughout Gojira's metal discography booms, but it's crisp and snappy, especially on The way of all flesh. That key detail gets lost on these earbuds.

Listen, I like a good amount of bass, but I also value clear detail and even-handed tuning. The ATH-CKS5TW isn't that.

In terms of the sub-$200 competition, Jabra's Elite 75t is the best alternative. It doesn't match the ATH-CKS5TW in terms of battery life, but it's respectable at 7.5 hours. Plus, they're much smaller than this Audio-Technica model, which not only looks better in your ear, but is also comfier to wear. If active noise cancellation (ANC) is a priority, Sony's WF-1000XM3 are the best option. In fact, they're our top pick for best overall headphones in 2019. Apple's AirPods Pro are also a solid option at $249, with handy features like hands-free Siri. Of course, you have to be willing to accept Apple's polarizing design choices. If you're looking for an even cheaper option, Audio-Technica unveiled the $119 ATH-CK3TW a few months ago, but we haven't been able to review those yet.

Audio-Technica's ATH-CKS5TW has stellar battery life and is affordably priced. The true wireless earbuds also have solid sound quality and reliable on-board controls. However, they lack the customization a lot of the competition offers, and they're missing some key features that would be nice to have. If you can live without those, the ATH-CKS5TW earbuds will likely last much longer than you'll ever need them to, and at $169, they won't break the bank either. And at the time of this review, Amazon has them on sale for $149, which might make your decision a little more difficult. You just have to decide if all of the things these don't have are features you're willing to live without in your quest to save a few bucks.

All products recommended by Engadget are selected by our editorial team, independent of our parent company. Some of our stories include affiliate links. If you buy something through one of these links, we may earn an affiliate commission. All prices are correct at the time of publishing.
Audio-Technica ATH-CKS5TW review: Long battery life at a decent price
ath-cks5tw
audio
audio technica
audio-technica
bluetooth
charging case
earbuds
gadgetry
gadgets
gear
review
true wireless
true wireless earbuds
wearables