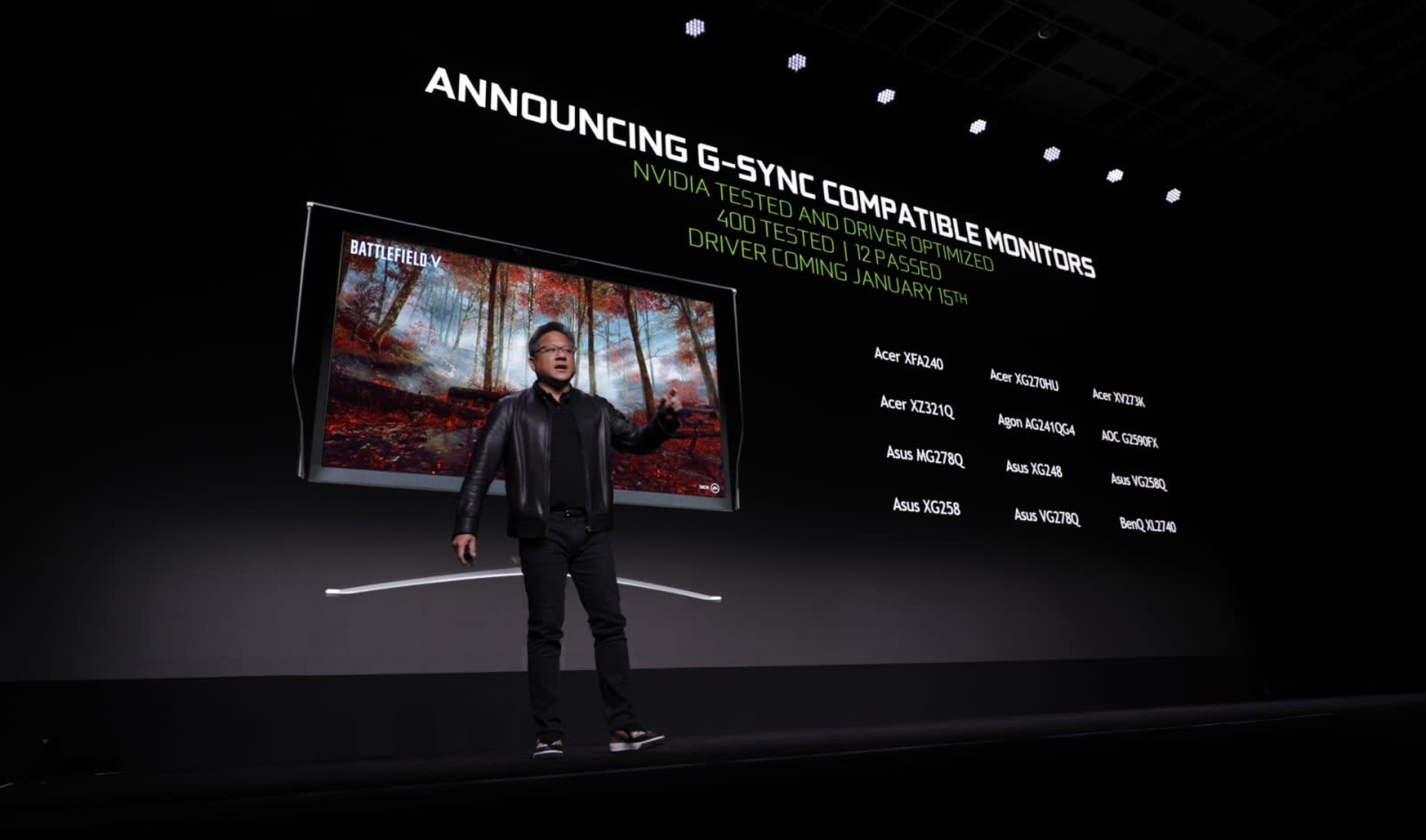 Monitor manufacturers must usually decide whether to use NVIDIA's G-SYNC and AMD's FreeSync, a crucial choice that can divide consumers into camps and drastically affect sales. Now, NVIDIA has brought G-SYNC compatibility certification to a number of monitors from Acer, Agon, Asus and Benq that were previously only FreeSync certified. The goal is evidently to expand its display ecosystem, but it will be a big benefit to the owners of those monitors, too.

Variable sync rates ensure your monitor and GPU are in sync, even when the frame rate changes, eliminating tearing and other artifacts. However, NVIDIA and AMD have implemented the technology differently, so folks have to choose one or the other depending on their graphics card. G-SYNC monitors tend to be more expensive because NVIDIA has a larger market share and charges manufacturers to have that logo. AMD's FreeSync, on the other hand, is royalty-free.

In perhaps a mild diss to AMD, NVIDIA said that it tested 400 monitors and only found 12 that were up to snuff. It also noted that "hundreds of monitor models [are] available [which are] capable of variable refresh rates (VRR) using the VESA DisplayPort Adaptive-Sync protocol," without actually mentioning that nearly all of them are FreeSync displays. It's set to test over a 100 more displays, and will no doubt approve a few more.

NVIDIA differentiates between fully certified G-SYNC displays and the newly approved models that it calls "G-SYNC compatible." It also notes that even if your FreeSync display isn't tested, it might still work. "For VRR monitors yet to be validated as G-SYNC Compatible, a new NVIDIA Control Panel option will enable owners to try and switch the tech on -- it may work, it may work partly, or it may not work at all," the company wrote.

It's probably a wise move on NVIDIA's part to take advantage of FreeSync's open-source standard to introduce the G-SYNC testing. That will let gamers who own those monitors switch over to NVIDIA, giving it an even bigger edge over its competition.

Source: NVIDIA
In this article: AdaptiveSync, Certification, CES2019, Displays, G-Sync, gear, GPU, nvidia, personal computing, personalcomputing
All products recommended by Engadget are selected by our editorial team, independent of our parent company. Some of our stories include affiliate links. If you buy something through one of these links, we may earn an affiliate commission.