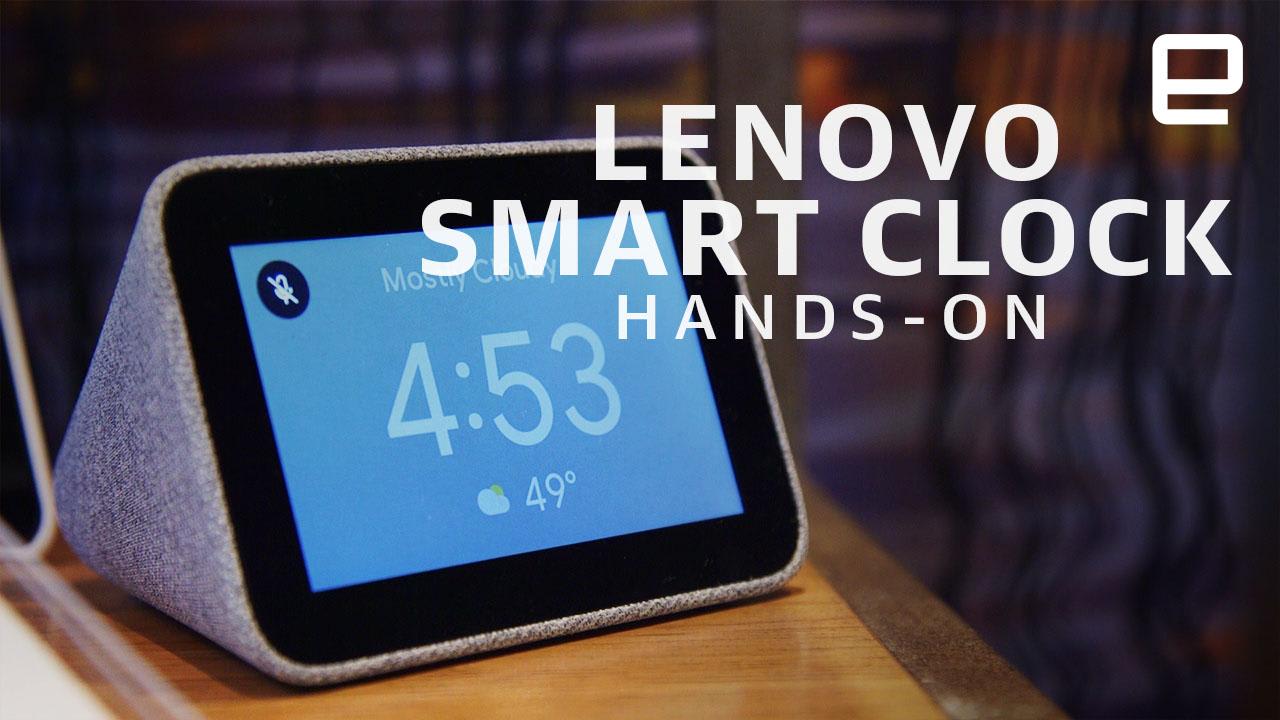 Google and Lenovo made waves last year when they revealed the first Assistant-powered smart display in Las Vegas, and the months that followed saw those screens become surprisingly common. This year, Google seems intent on making smart screens even more ubiquitous, even if it means changing up what these things are capable of. Need proof? Meet the new Lenovo Smart Clock, the first in what will surely be a long line of homebound, Google-infused timepieces.

On the surface at least, the Smart Clock looks a lot like any other smart screen we saw last year, just a little smaller. We're working with a 4-inch display running at 800 x 480, 1GB of RAM, 8GB of storage and a single 3W speaker here -- that's all fairly modest, but c'mon -- we're talking about a clock here. To Lenovo's credit, it's even appropriately cute, in a neutral sort of way; the Smart Clock is wrapped in a wholly inoffensive heather grey fabric that should at home in all but the most ostentatious bedrooms. As it turns out, though, size really does matter: because there isn't as much real estate to work with on these screens, Google had to pare down what people can actually use Smart Clocks for. Don't worry about watching YouTube videos (you can't) or making face-to-face calls using Google Duo (there's no camera). Hell, at this point you can't even use the thing to look at pictures stored in your Google Photos locker. You can ask it all the same things you normally would of Google Assistant, but the minimalist, Android Things-based software design makes clear that the Smart Clock mostly meant to tell you the time and wake you up in the morning.

That said, it does seem to very good at those things, especially if you want to be eased into your day. About a half hour before your alarm is set to go off, the Smart Clock will slowly ramp up its screen brightness and cycle from dark to light colors, creating a sort of simulated sunrise in your bedroom. The idea is that, by gradually increasing the amount of light you're exposed, you'll wake up more gently rather than feel the spike of adrenaline when usually comes when your alarm starts blaring first thing in the morning.

It's a clever idea, but one that doesn't seem fully fleshed out yet -- ideally, you should have the option to set the alarm sound to start playing earlier and grow louder over time, too. If you have events loaded into your calendar, Assistant will also take those into account and make suggestions about alarms you should set to make sure you're up with time to spare. (On a personal note, Google, you might have just saved my life with this feature.)

So yes, for now at least, this first wave of Google-y smart clocks has some notable limitations. Google told us, however, that it's still exploring what kinds of visual experiences could work well on screens this size, so it probably won't be too long before these things start to do more. For you early adopters (and the chronically late), Lenovo's Smart Clock might be worth the $80 when it ships later this year.

In this article: ces2019, gear, google, googleassistant, hands-on, home, lenovo, lenovosmartclock, smartclock
All products recommended by Engadget are selected by our editorial team, independent of our parent company. Some of our stories include affiliate links. If you buy something through one of these links, we may earn an affiliate commission.