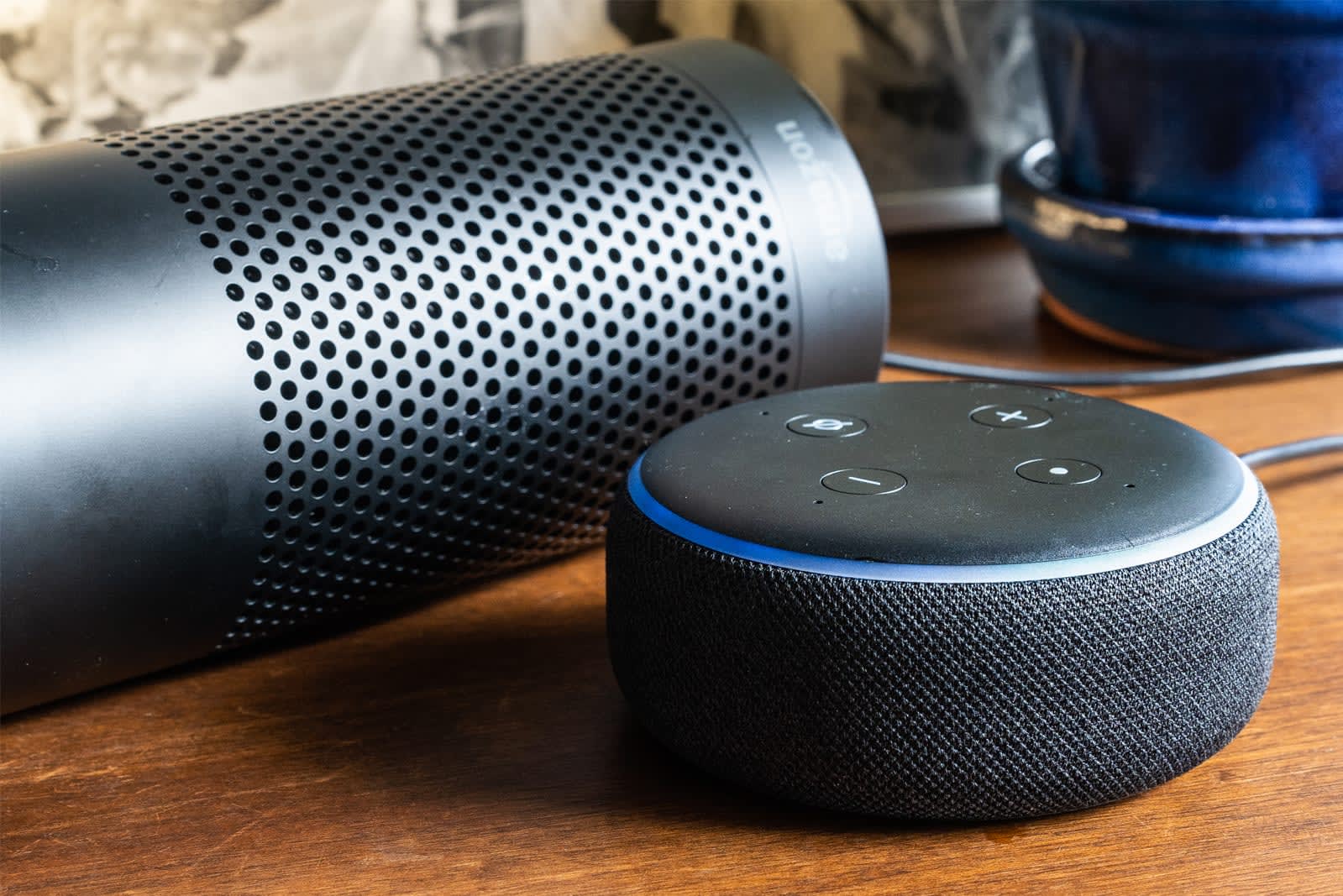 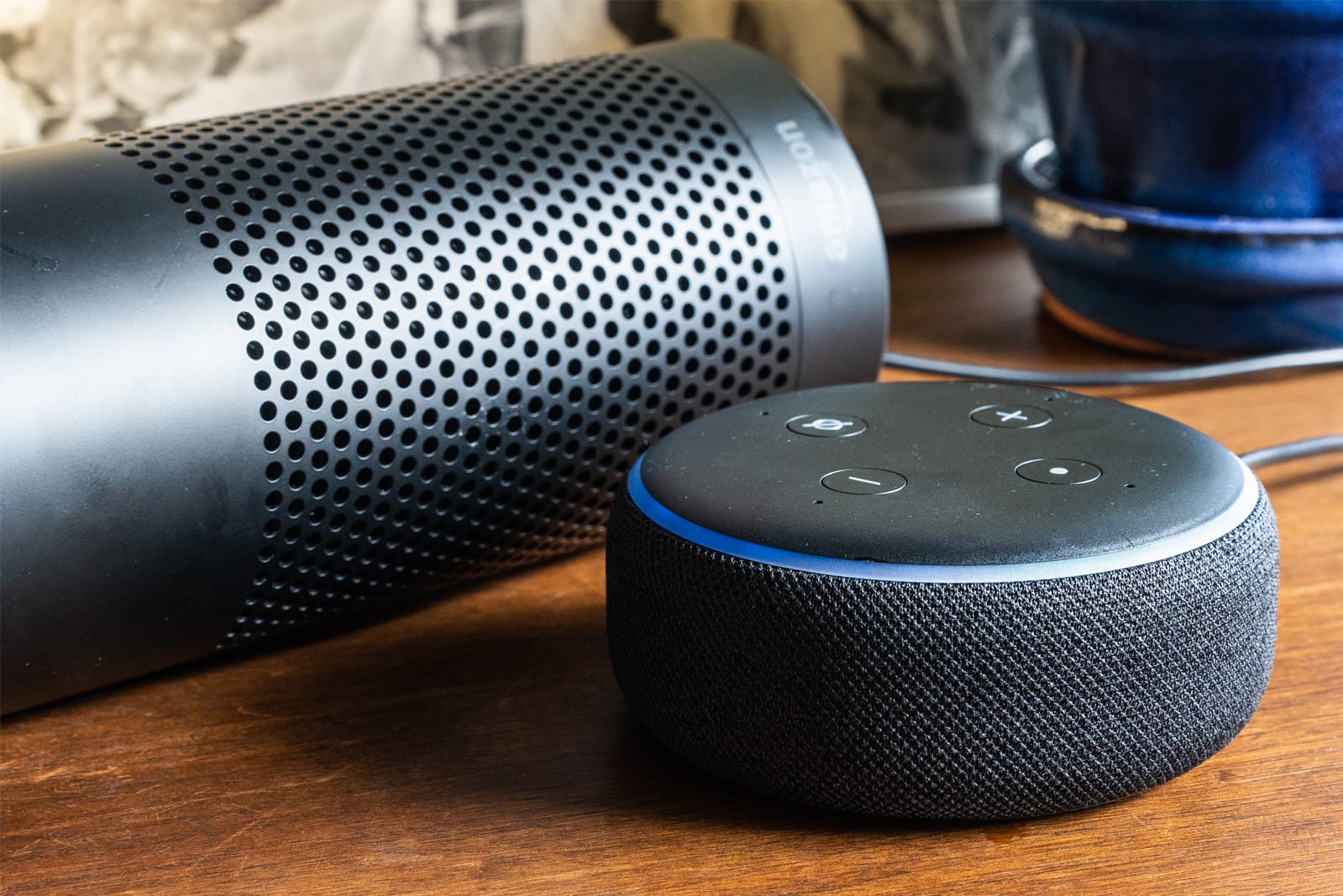 This post was done in partnership with Wirecutter. When readers choose to buy Wirecutter's independently chosen editorial picks, Wirecutter and Engadget may earn affiliate commission. Read the full blog on how many smart speakers you need in your home here.

Whether you're already one of the 20 percent of American adults who own a voice-controlled smart speaker or you're still on the fence about investing in an Amazon Alexa or Google Assistant device or an Apple HomePod, you might be wondering just how many of these intelligently attentive devices you'll need. A smart speaker can offer voice-controlled convenience throughout your home—but only if it can hear you.

The number of speakers you should buy depends on what kind of home you live in, and where and when you'll need your voice assistant to hear you. We have a few suggestions, depending on whether you want to build a smart-home setup, to listen to music and podcasts, to keep in touch with family and friends, or to use a digital assistant to boost your productivity. If you plan to buy multiple smart speakers, we recommend staying in the same family—although you could set up an Alexa-based speaker in one part of the house and a Google Assistant device somewhere else, you'd probably end up forgetting which platform has your to-do lists and which one controls the lights, or you'd have to do lots of redundant setup to get your smart home working with both platforms.

To control a smart home without having to pull out your phone, get at least one smart speaker for each major living area so that they're always within voice range when you need them. Before you buy, identify the rooms in which you plan to use smart speakers the most. If you have more than one such room on each floor, also consider whether the walls could block sounds, creating the need for a speaker in each room.

You don't need a full-size smart speaker in each location if you need it to listen only to commands or to answer questions and you won't often use it to play music or podcasts in every room. The smaller, cheaper versions, such as the Amazon Echo Dot and Google Home Mini, let you easily spread voice control around a large home.

A single smart speaker can connect to any number of smart-home devices—but if you have smart lights, smart wall outlets, or other such devices throughout the home, you may need to arrange several smart speakers so that they can hear your commands no matter where you are.

For example, I live in a 1,000-square-foot three-bedroom house with an unfinished basement. I have three Alexa-enabled speakers: an Echo Plus in the kitchen that my wife and I can also hear from the bedroom, an Echo Dot in the living room, and an Echo Dot in my music studio downstairs. In the kitchen, I can ask Alexa to turn on the switches in the basement music studio; by the time I walk down the stairs, the lights are on and the amps are warmed up. When I'm finished, I can tell the Echo Dot in the basement to turn everything off. I also have it set to automatically shut down at midnight, just in case I forget. We can even adjust the lighting or temperature with voice commands, whether we're lying in bed or watching TV in the den across the house.

If you live in a studio or open-concept home, however, a single speaker could be all you need. When I lived in a 1,200-square-foot loft space, the wide-open design meant that a single Echo Plus speaker was enough for Alexa to hear me from anywhere.

If you plan to use a smart speaker only for tasks such as checking your schedule or making to-do lists, you may need just one speaker in your primary work space. Similarly, if your primary need is for reading out recipes, recording your grocery lists, setting timers, or other assistance while you're cooking or eating, you could probably get by with a single speaker in the kitchen. In these cases, your smartphone, which probably has either Google Assistant or Siri built in, should be able to fulfill the role of a second, portable smart speaker for related tasks that follow you beyond the home or office.

Most smart-speaker platforms enable you to add things to your grocery or to-do list, search the Web for quick answers, check your calendar, and perform basic tasks such as setting timers and doing math. You can do even more by creating your own functions on websites like IFTTT. Each of these tasks might sound like minor victories on their own, but the more you can automate, the more time and mental bandwidth you can free up for yourself. You can accomplish many of these things with the voice assistant that's likely built into your smartphone. But smart speakers such as Amazon Echo and Google Home models are generally easier to use because they support more natural-language cues, which make it easier for you to rely on them and build better habits for your productivity.

Even in my three-Echo household, I typically rely on the Echo Plus in my kitchen only for digital assistant tasks such as adding to my grocery list or checking my calendar and to-do list in the morning over breakfast. Google Home and Apple HomeKit devices can integrate with your smartphone via Google Assistant and Siri, which means you can use their productivity features on the go. With Alexa, you can leave reminders through your smart speaker that then transmit to the app on your phone. This feature is helpful if you (like me) are painfully forgetful.

The more you can automate, the more time and mental bandwidth you can free up for yourself.

Listening to music, audiobooks, and more 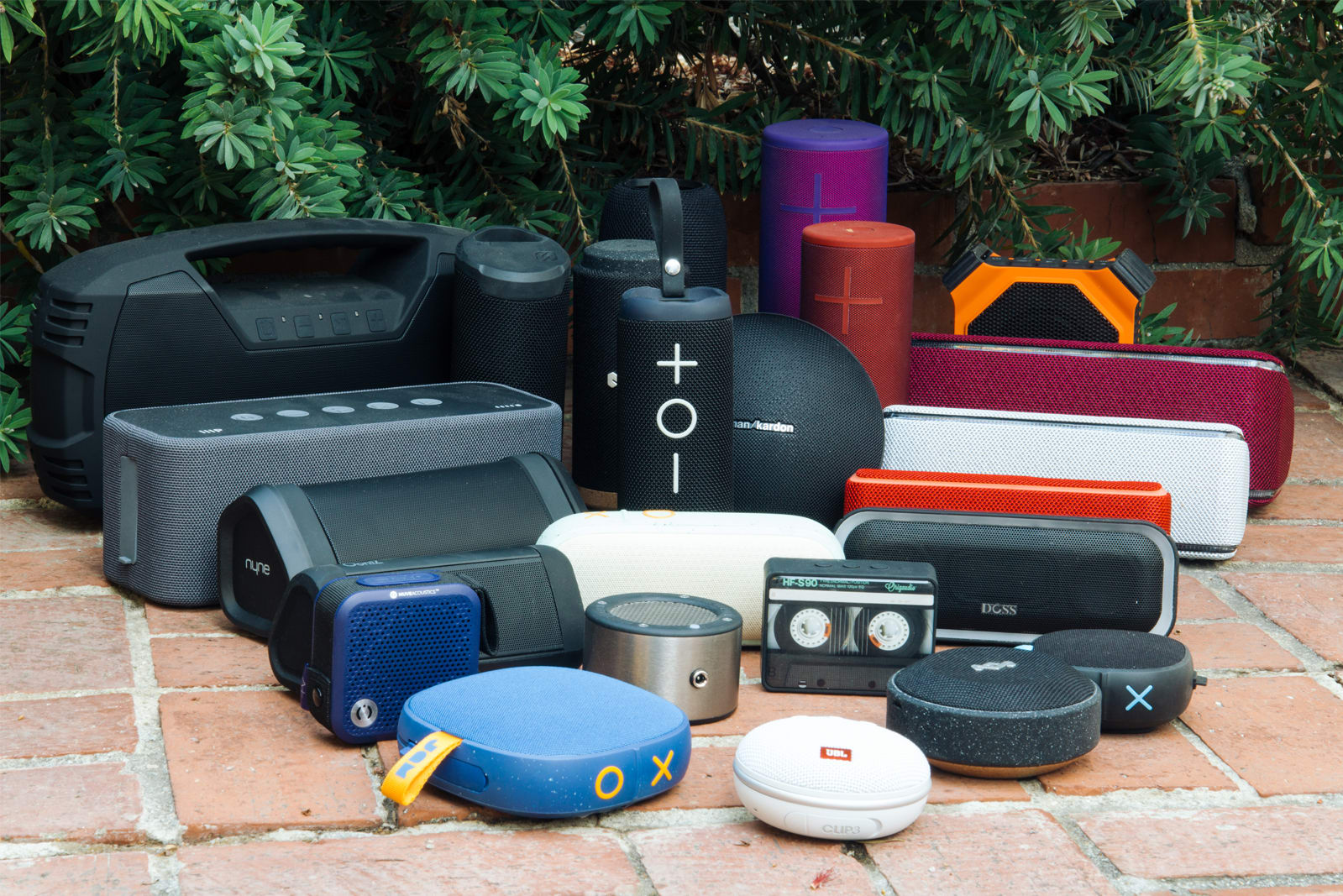 If you want to improve the audio or extend the sound of your smart speaker, these are some of the portable Bluetooth speakers we tested for our fall 2018 update. Photo: Brent Butterworth

If you're looking to stream music or podcasts that sync across multiple rooms in your home, you'll need more than one speaker. However, you may be able to use a mix of smart speakers and basic speakers without voice-control capabilities. Most people prefer having a higher-quality smart speaker in their primary listening location, such as the living room, kitchen, or dedicated music nook. But you can save money by supplementing this setup with smaller, more affordable speakers such as the Google Home Mini or the Echo Dot, so you can still hear alarms and news broadcasts in other rooms.

For a multiroom music experience made up entirely of smart speakers, we think the Sonos platform is the best way to go. Most streaming services can play out of multiple smart speakers simultaneously when configured for multiroom playback, but a Sonos speaker offers more music services, provides the best coordination, and sounds better. Echo and Google Home speakers can also work in a multiroom audio system, but Sonos makes the setup simpler and works with more music services. We particularly like the Sonos One, which already has Alexa built in; the company has announced plans to add Google Assistant and HomeKit support in the future as well.

You can also connect Amazon Echo speakers to an existing stereo system through the aux port, or via Bluetooth to any number of home Bluetooth speakers or portable Bluetooth speakers; Google Home speakers can connect to other devices via Chromecast. Apple's HomePod is compatible only with other Apple devices. If you plan to take a Bluetooth speaker into the backyard, you could choose something portable such as the UE Megablast, which includes Alexa support. 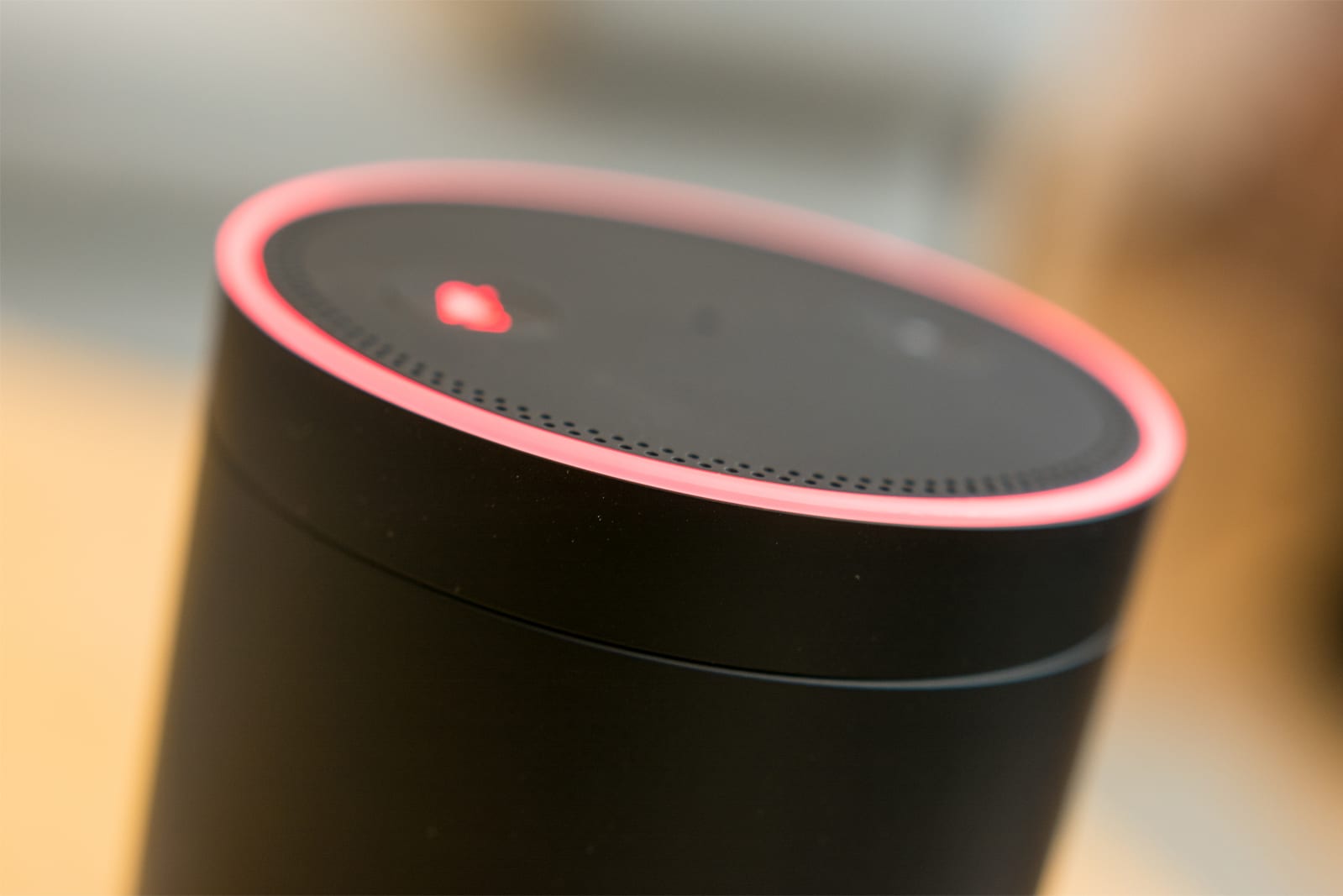 Your smart speaker's microphone allows you to make and receive calls to and from any phone number or other smart speakers. Photo: Michael Hession

If you want to communicate between rooms in your home or accept calls on a smart speaker, you should place a speaker in each room from which you might communicate. If you plan on making only outgoing calls, a single smart speaker should suffice.

You can make phone calls or send text messages through your smart speaker, whether you have an Echo, a Google Home, or a HomePod—although the way that call or message is routed, and what numbers you can reach, might be limited based on your location and phone provider. Your smart speaker essentially works as a speakerphone, but Echo devices can also pair with Bluetooth headphones (in which case, you may as well just pair those Bluetooth headphones with your phone and take the call that way).

Phone-call capabilities likely aren't the most important factor for most people who are deciding to invest in a smart-home system. That said, such features can be a real godsend when you're in the middle of cooking dinner and need to tell your spouse or roommate to grab an avocado on their way home. Consider where you're most likely to want to take a call hands-free, and make those locations the first places you put a smart speaker for taking phone calls.

You can also create an intercom system, which lets you converse between rooms by voice or video call. As with taking phone calls, consider where you might use the feature the most. In my home, we occasionally rely on the intercom feature, but it isn't always as convenient as we want it to be. There is a slight lag, and our kitchen and living room are close enough that we end up hearing the unintelligible sound of the other party's distant voice before we hear their words coming through the speaker.

When you're deciding where to place a speaker, you should also consider whether its positioning might make for some awkward or invasive moments—something to consider before you invest in any Internet-connected hardware. One time I was recording a song for an album when I heard a strange sound in my headphones, like a filtered ghost howling through a chorus pedal. I glanced up and saw a little green ring circling my Echo Dot, which meant that the Drop In feature (which allows household members to talk between smart speakers, intercom-style) was on—and that the ethereal sound was just my wife trying to say hi without interrupting me. Now I know to mute the speaker when I'm recording.

In this article: av, gear, home, partner, smartspeaker, syndicated, thewirecutter, wirecutter
All products recommended by Engadget are selected by our editorial team, independent of our parent company. Some of our stories include affiliate links. If you buy something through one of these links, we may earn an affiliate commission.