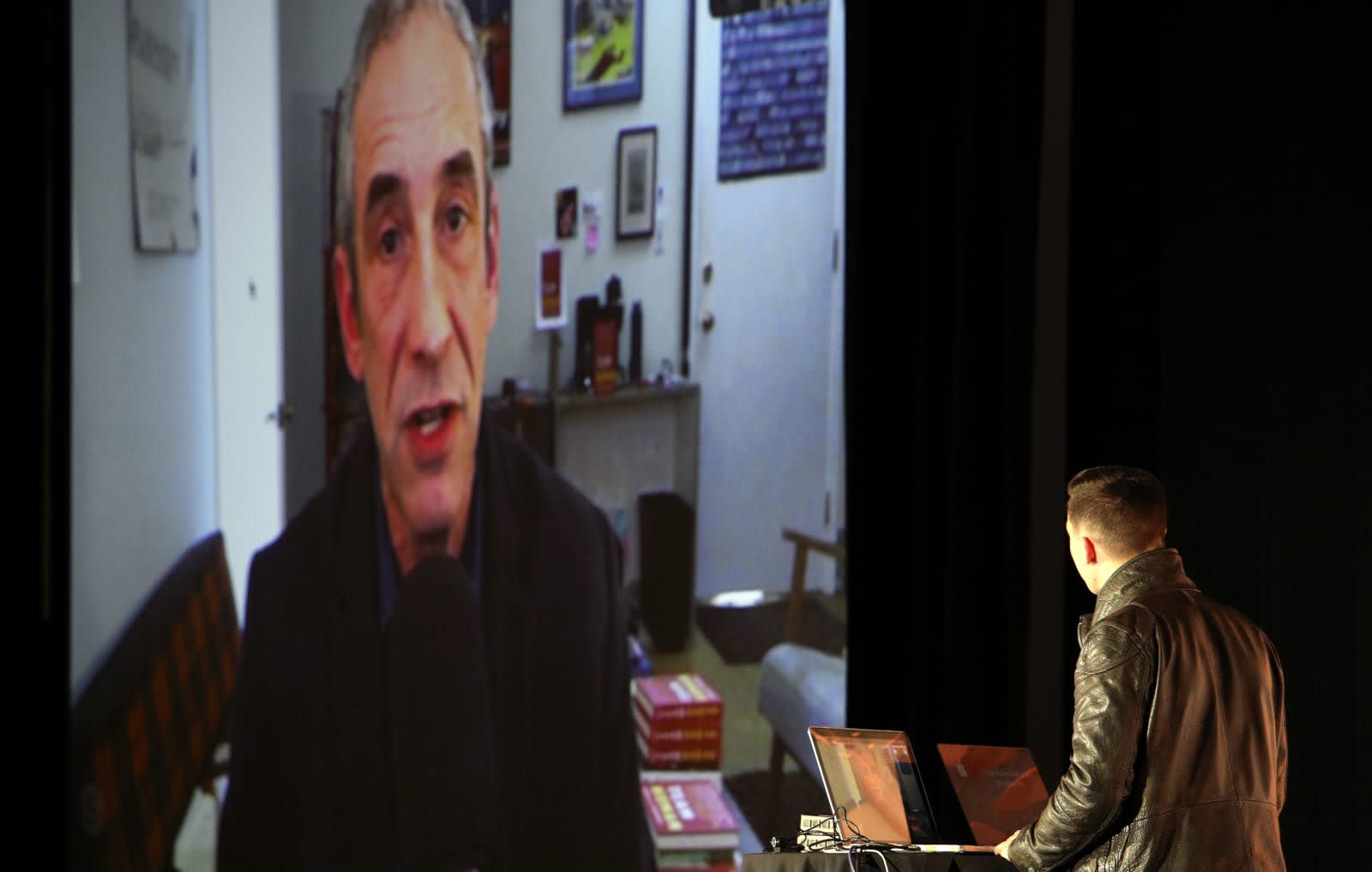 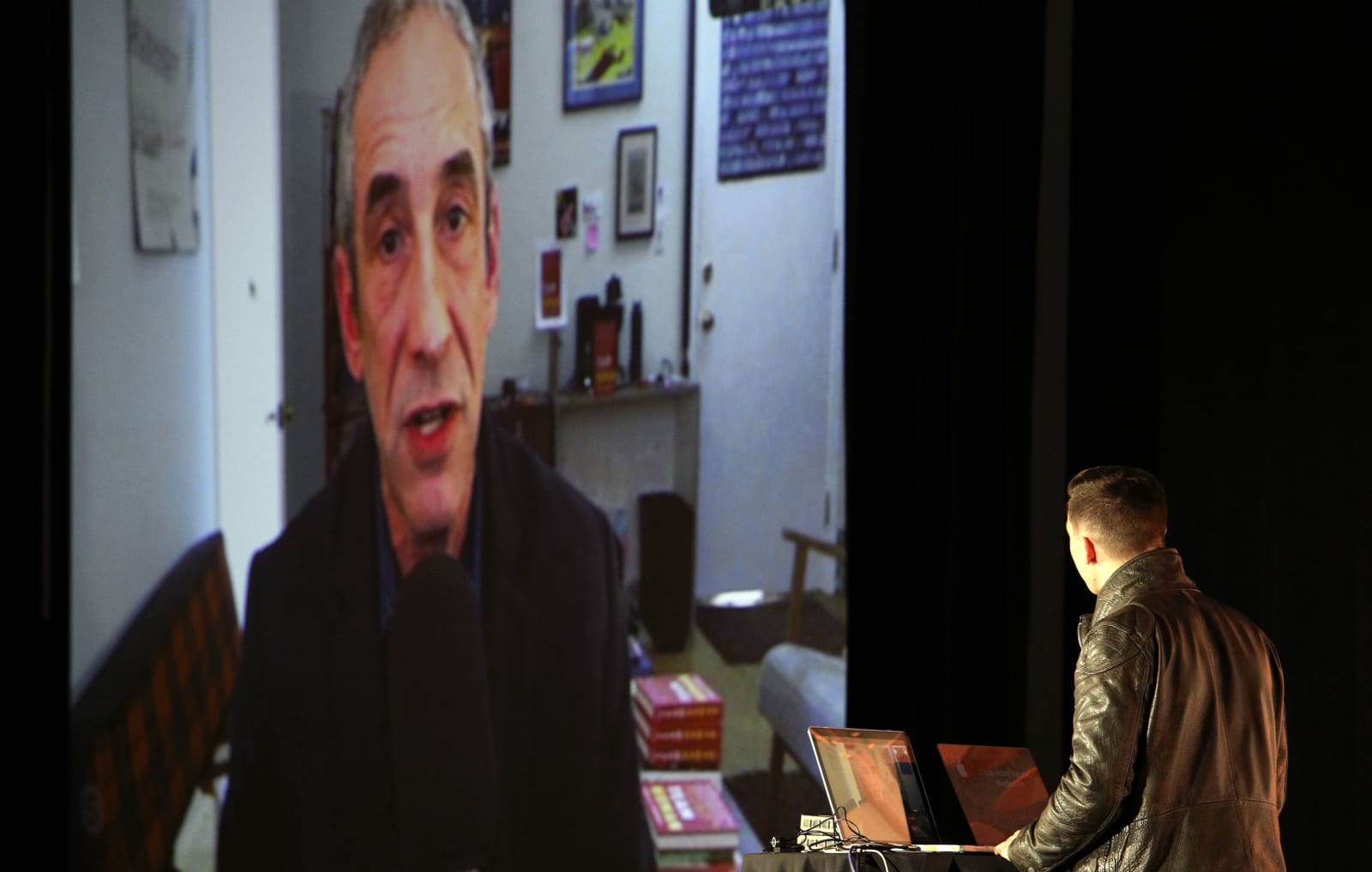 It might seem like there's no winning against Facebook and Google, tech companies whose reach and influence are now practically inescapable. Facebook's inability to police its own platform led to widespread misinformation ahead of the 2016 election. Google still can't keep YouTube safe for kids. Meanwhile we're addicted to our phones and social networks, even if they make us miserable. So where do we go from here? Douglas Rushkoff, the renowned media theorist who's popularized concepts like viral media, suggests one way: Banding together and fighting for our collective humanity.

While he was scheduled to appear in person, Rushkoff ended up Skyping in to his talk from New York City, due to a family emergency. If it were any other book, he might have still made the trip, Rushkoff said. But, staying home to take care of his family actually fits into the broader theme of this book: Only humans working together can save our society from the tyranny of tech.

"Being human, is a team sport," Rushkoff says. "It's impossible to remember that under the myth of competitive capitalism and exponential growth. Nothing in nature grows exponentially, except cancer. And then it kills its host."

"I've started actually to think about almost every technology as a drug," he added. It's true when you're on Facebook and the internet at large. But he noted that the same was true of every medium, even the English language. Part of the appeal of taking a vow of silence, he said, was that it helps you detox from the drug of language. "It was why acid heads were hired to write the operating systems at Apple, Intel and IBM," he said. It was typically kids and psychedelic drug users at the time who wanted to dive into virtual worlds.

"Algorithms seem to me, at this point, the closest thing we have to demons."

Rushkoff has chronicled how technology and media has affected our society for decades. His 1994 book Cyberia was one of the first deep dives into cyberculture, and it was optimistic about the counter-cultural aspects of the internet. But it didn't take long before things went mainstream with America Online. Since then, he argues, online companies have been hyper-focused on building predictability into their services and algorithms, at the expense of the "increased novelty, strangeness and anomalous behavior" of the early internet. It's the difference between people having imperfect-yet-distinctive Geocities sites, to everyone having Facebook pages with zero personality.

"Algorithms seem to me, at this point, the closest thing we have to demons," Rushkoff said. "We put something out on the internet to teach it how to find our exploits ... and then leverage them to do behaviors and take actions against our better judgement and against our best interests."

Even if you're not familiar with his books, there's a good chance you've seen Rushkoff's viral 2018 Medium post, Survival of the Richest, where he describes an incredibly awkward discussion with a handful of billionaires. While he thought he was being hired to deliver a keynote about the future, he instead spent the meeting fielding questions about how they'd survive after "The Event," an innocuous term they used to describe societal collapse due to something catastrophic like climate change or a nuclear attack. (My favorite bit: How can they make sure their bunker security force doesn't revolt?)

"It was sad for me, that these guys who I thought were so rich and powerful ... actually see the future as an inevitability, not as something they can change," Rushkoff said. "So really, the best hey can do is earn enough money to insulate themselves from the reality they're creating by earning money in that way."

Even transhumanists, the most optimistic technology enthusiasts, tend to see "humanity" as a problem, Rushkoff says. They're eager to upload their brains to the cloud so they can live forever, even after their bodies die and society falls apart. They're ready for humans to recede once the Singularity occurs, the point at which AI becomes so powerful it'll self-evolve beyond our comprehension.

Rushkoff doesn't prescribe specific ways to fix our current dilemma -- instead he describes Team Human as a manifesto meant to help us through our current technopocalypse. He wants us to re-center our lives on the people around us, rather than the tools we rely on. It's a state of mind we can all use, whether we're building a new app or just writing up a marketing deck. It's not that hard to ask ourselves if it's bringing people together, or pulling them apart.

And remember, it's about humanity, not just humane technology. "When I hear the term humane technology, I think about the writing on a package of cage free chicken," Rushkoff said. "It was raised humanely all the way to the slaughter ... So let's treat the humans more humanely as we extract their data."

In this article: Douglas Rushkoff, gadgetry, gadgets, gear, Humanity, internet, SXSW, SXSW2019
All products recommended by Engadget are selected by our editorial team, independent of our parent company. Some of our stories include affiliate links. If you buy something through one of these links, we may earn an affiliate commission.