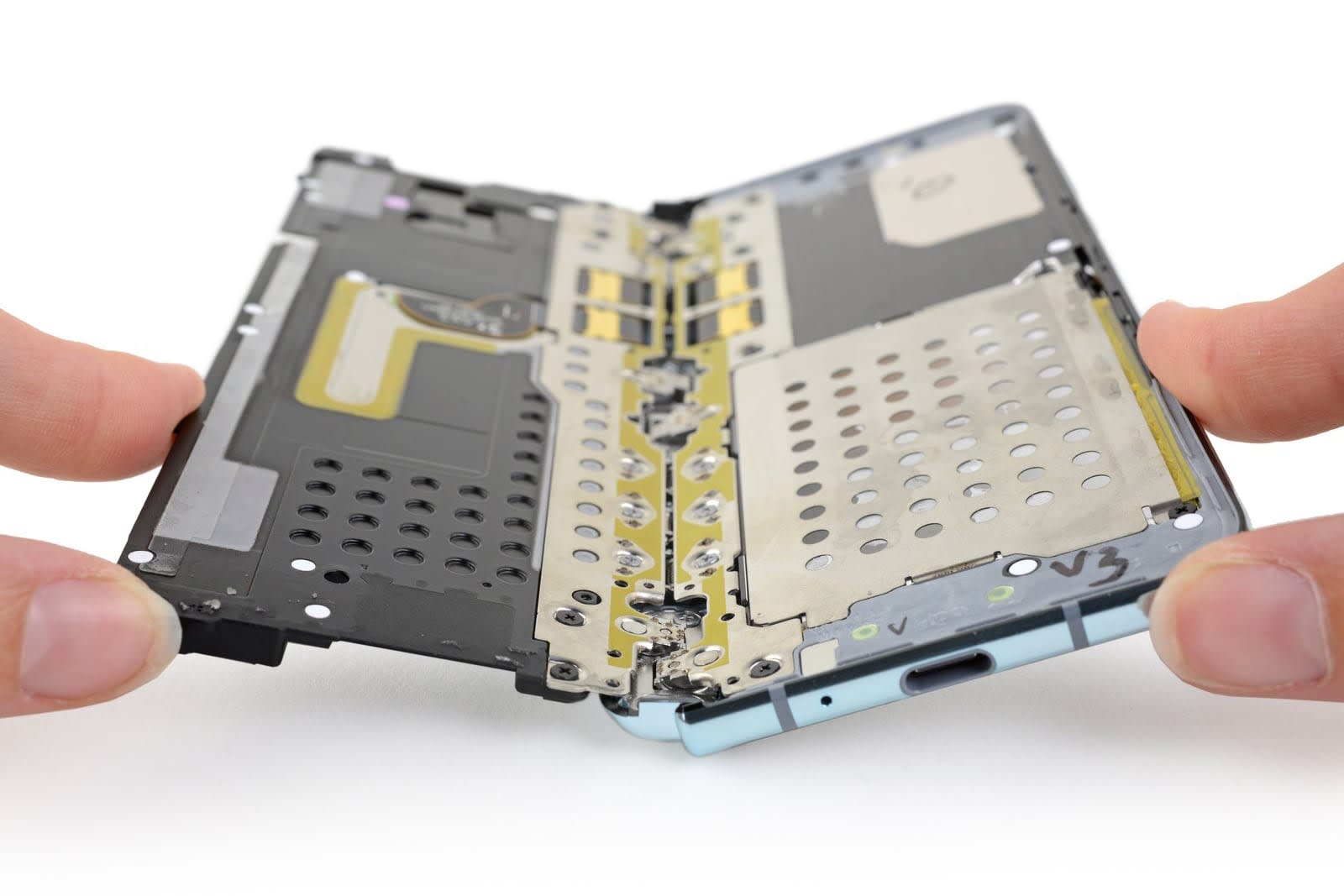 There's been another teardown of the Galaxy Fold, and this one might help explain why Samsung decided to delay the phone's launch. iFixit has conducted a part-by-part dissection that suggests the design is "alarmingly fragile," particularly around the hinge. While the actual folding mechanism appears sturdy (if possibly vulnerable to wearing down in the long run), there's no ingress protection -- dirt can easily slip inside, potentially getting stuck between the hinge and the plastic OLED screen.

The findings might help explain at least one of the review unit failures. The Verge's Dieter Bohn noted that his Galaxy Fold developed a bulge that ultimately broke a conspicuous number of pixels. If debris was at fault, that wouldn't bode well for everyday users whose phones might break relatively easily. This also isn't including the inherent fragility of a plastic display, which is more prone to nicks and scratches than glass.

It's not completely surprising that the Fold would be vulnerable when it's not rated for dust or water resistance. Still, this latest teardown isn't confidence-inspiring. If iFixit is on the mark, Samsung may need to make significant design changes for the device to stand up to real-world use.

"We were provided our Galaxy Fold unit by a trusted partner. Samsung has requested, through that partner, that iFixit remove its teardown. We are under no obligation to remove our analysis, legal or otherwise. But out of respect for this partner, whom we consider an ally in making devices more repairable, we are choosing to withdraw our story until we can purchase a Galaxy Fold at retail."

It's unclear exactly what agreement that trusted partner may have had with Samsung as to how the device would be handled, but usually iFixit's teardowns are done on retail-purchased hardware. Now that the Galaxy Fold launch has been delayed, it's unclear how long it will be until that's possible, and what might be different inside when they hit the shelves.

Source: iFixit, iFixit Blog
In this article: foldable display, foldable phone, galaxy fold, gear, ifixit, mobile, samsung, smartphone, teardown
All products recommended by Engadget are selected by our editorial team, independent of our parent company. Some of our stories include affiliate links. If you buy something through one of these links, we may earn an affiliate commission.