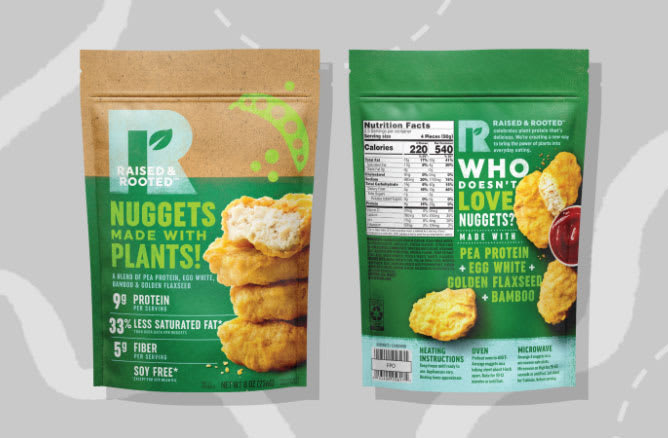 Tyson, one of the biggest food producers in the US, is getting into the alternative protein game, but it hasn't embraced entirely plant-based products just yet. Its chicken nugget alternative contains egg, while the burger patties in the Raised & Rooted lineup are a blend of lean Angus beef and pea protein.

Along with egg white, the chicken-less nuggets also use pea protein, in addition to flaxseed and bamboo fiber. Both products will go on sale later this year. Tyson says it's working on more alternative proteins, but it's not clear as to whether any of those will be entirely plant-based.

"Today's consumers are seeking more protein options, so we're creating new products for the growing number of people open to flexible diets that include both meat and plant-based protein," Noel White, president and CEO of Tyson Foods, said in a statement. He added that Tyson has no plans to move away from traditional meat, and will sell both types of products.

The move underscores a growing demand, and makes Tyson a direct competitor to Impossible Foods and Beyond Meat, both of which sell vegan plant-based proteins that are rapidly growing in popularity. Tyson was an investor in Beyond, but sold its holding before that company's IPO in April. When Beyond filed to go public in November, Tyson held a 6.5 percent ownership stake. By this week, Beyond's stock price had soared more than 600% since its IPO.

Source: Tyson Foods
Coverage: CNN
In this article: alternative proteins, alternativeproteins, beyond meat, beyondmeat, food and drink, food-and-drink, foodanddrink, gear, impossible foods, impossiblefoods, meatless, tyson foods, tysonfoods
All products recommended by Engadget are selected by our editorial team, independent of our parent company. Some of our stories include affiliate links. If you buy something through one of these links, we may earn an affiliate commission.