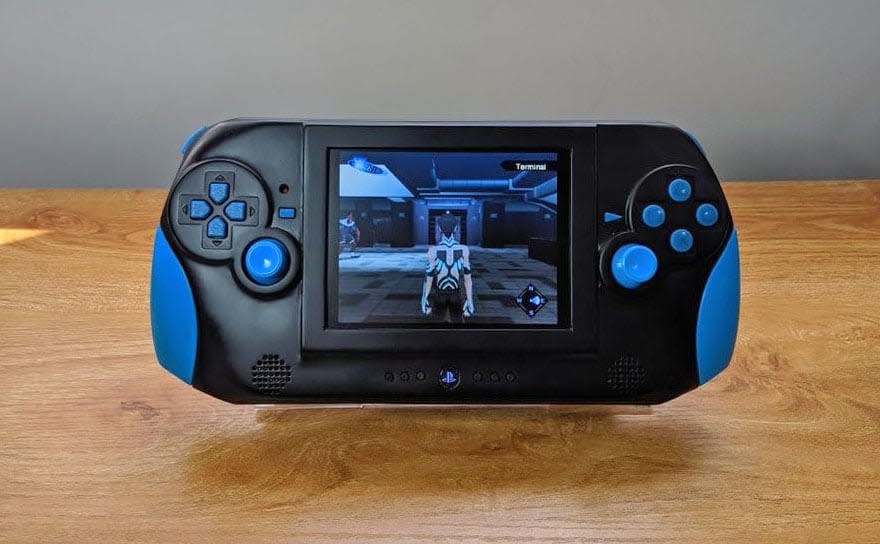 The PlayStation 2 has been in the grave for over a decade, but that hasn't kept gamers from tinkering with Sony's iconic console. Reddit user darkwingmod has been working on and off for several years to perfect his vision of a portable PS2, the PIS2. The build features genuine PS2 hardware augmented with a Raspberry Pi 2, which loads game files over an ethernet-connected SMB server; no emulation is involved. Darkwingmod says that the games run close to full speed and FMVs play smoothly.

The PIS2 squeezes the motherboard of a PS2 Slim into a large but comfy-looking chassis, which includes a screen compatible with VGA and composite signals. The battery lasts for 90 minutes and can be charged with a standard PS2 power cable.

The unit is equipped with one external memory card slot, while the other slot is hidden within the chassis and has a memory card with Free MCboot permanently installed. Free MCboot is a softmod that lets users run unsigned code. On a traditional PS2, for example, it can run games copied to blank DVDs. On the PIS2, it evidently enables the games to run after being transferred from the SMB server.

As disc-based consoles age and become less reliable, gamers who aren't satisfied with emulation need options. Projects like the PIS2 (and specifically its SMB server tricks) will help keep the PS2 library available for vintage enthusiasts. Meanwhile, solutions like the PSIO, Saturn Rhea and Dreamcast GDemu are keeping the dream of the '90s alive and running on authentic hardware.

For more details on how darkwingmod created the PIS2, check out his step-by-step progress on BitBuilt.

In this article: av, diy, do it yourself, doityourself, Free MCboot, gadgetry, gadgets, gaming, gear, mod, PIS2, playstation, ps2, raspberry pi, RaspberryPi, smb, sony
All products recommended by Engadget are selected by our editorial team, independent of our parent company. Some of our stories include affiliate links. If you buy something through one of these links, we may earn an affiliate commission.