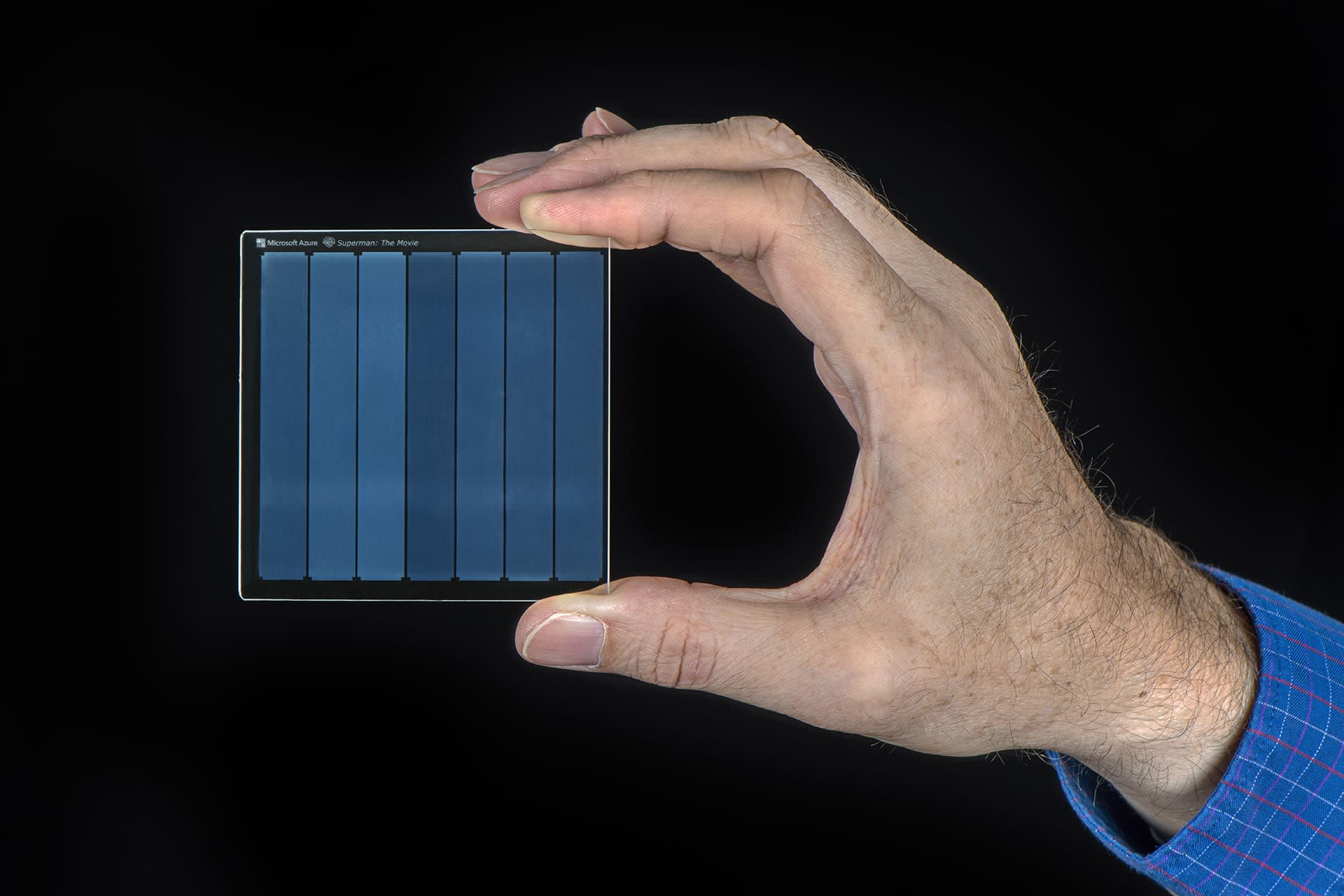 Movie studios archive thousands of movies in their warehouses. But celluloid, the medium onto which master copies are printed, isn't the most stable storage format; it's prone to decay and is highly flammable. Yet, switching to hard drives wouldn't be helpful, since they're so prone to failure. Microsoft's new glass-based storage medium could do the trick. As reported by Variety, Warner Bros. has saved the 1978 version of Superman onto one of Microsoft's Project Silica glass plates, which will supposedly last for centuries.

The goal of Project Silica, which began in 2016, is to create a solution ideal for cold storage -- data that needs to be stored but rarely accessed for long periods of time. Archived master copies of films are usually only taken out of storage for remastering projects. Between their infrequent use and the volatility of celluloid, old movies sitting in studio warehouses are a reasonable use case for Microsoft's glass storage.

Project Silica's glass square that contains Superman measures 7.5 cm x 7.5 cm x 2 mm and holds 75.6 GB of data. That may not sound so impressive given that a dual-layer Blu-ray holds 50 GB on 12 cm disc. But as Microsoft develops the technology, the company is creating discs with higher and higher capacities. Plus, the main benefit of this new medium is longevity and stability, not capacity. Research teams have put the square discs through their paces, ensuring the data is still readable even after baking them in ovens, dunking them in boiling water, heating them in microwaves and scratching them with steel wool.

Brad Collar, Senior Vice President of Global Archives & Media Engineering at Warner Bros. explained to Variety why the studio chose Superman to test Microsoft's technology. Years ago, Collar and his team found audio recordings of a Superman radio play stored on glass discs, but had to find the right playback devices in order to digitize the audio. So when he heard of Project Silica, which also uses glass, he thought of it as "a beautiful full circle."

Project Silica uses lasers similar to the ones used in Lasik eye surgery to burn shapes called voxels into glass. These voxels hold multiple bits of information, unlike the pits and lands on an optical disc, which only hold a zero or one. Additionally, the glass discs can hold many layers; CDs, DVDs and Blu-rays usually have two layers, but Microsoft squeezed 74 layers into the disc that holds Superman. According to Variety, newer discs have even more layers. The data can be accessed by shining a light through the glass and analyzing the reflections with microscope-like readers. A bit-by-bit verification proved that the movie was perfectly written to the medium.

This collaboration between Microsoft and Warner Bros. is just a pilot test. The technology still needs to mature and engineers need to create a unified read/write device similar to today's optical disc burners. Plus, studios aren't about to toss out their millions of film canisters; the original analog versions are arguably a more ideal source material for creating new prints or remastered videos.

Source: Variety
In this article: av, entertainment, gadgetry, gadgets, gear, microsoft, tomorrow
All products recommended by Engadget are selected by our editorial team, independent of our parent company. Some of our stories include affiliate links. If you buy something through one of these links, we may earn an affiliate commission.