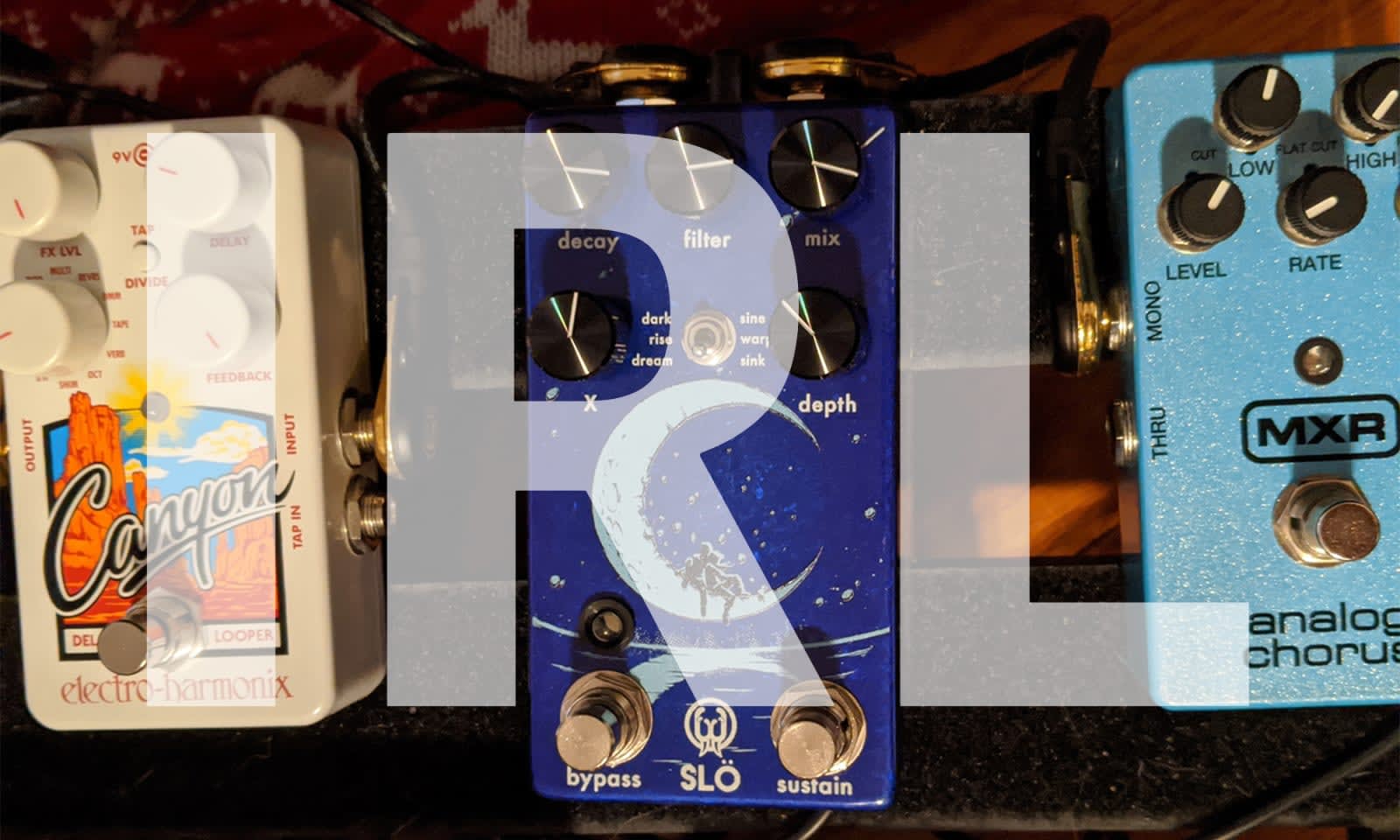 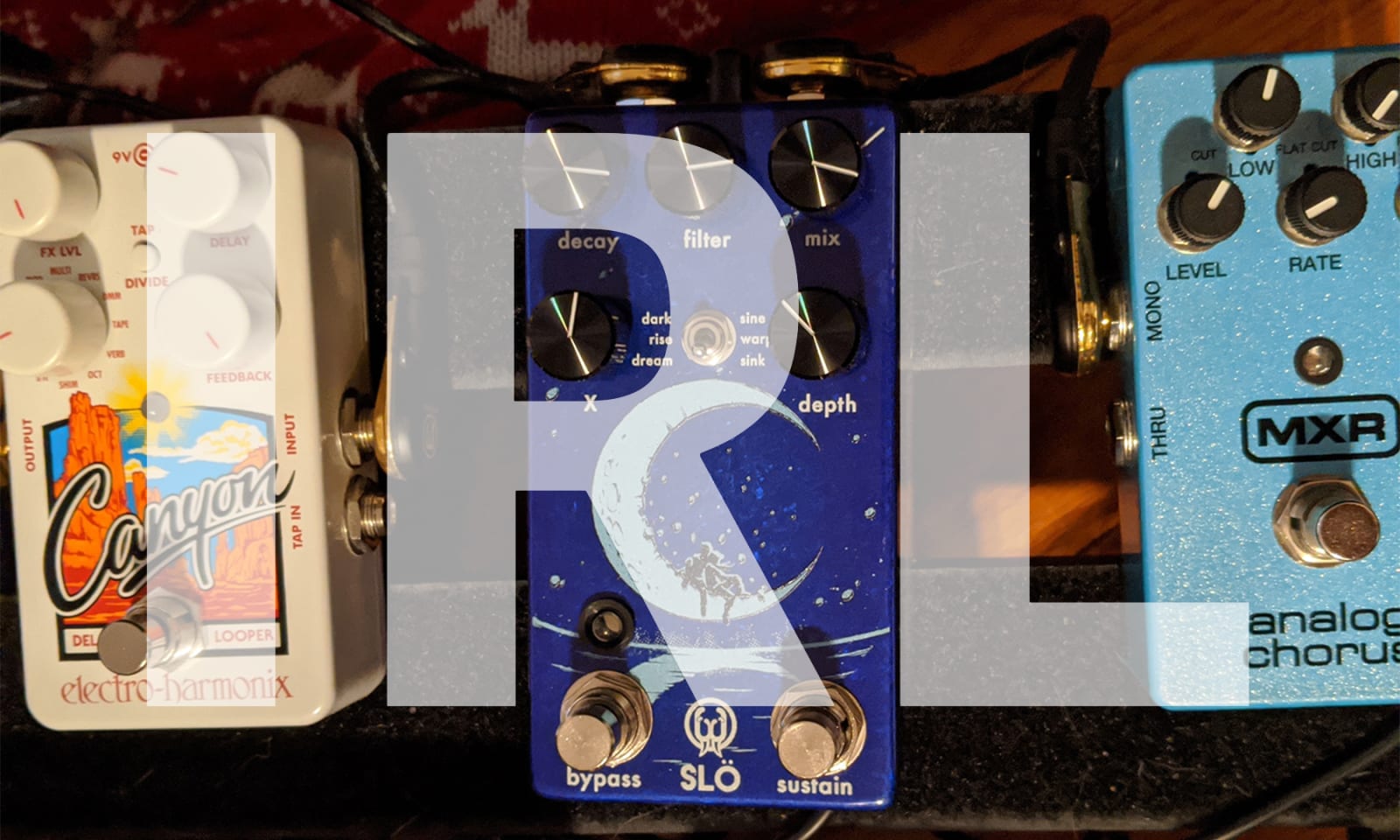 A couple of our editors went on a buying spree over Thanksgiving break, and bought "gifts" for themselves. In a complete coincidence, both Managing Editor Terrence O'Brien and Senior Editor Chris Velazco purchased devices of a musical bent; the Slo Multi Texture Reverb from Walrus Audio and a Glarry electric bass. 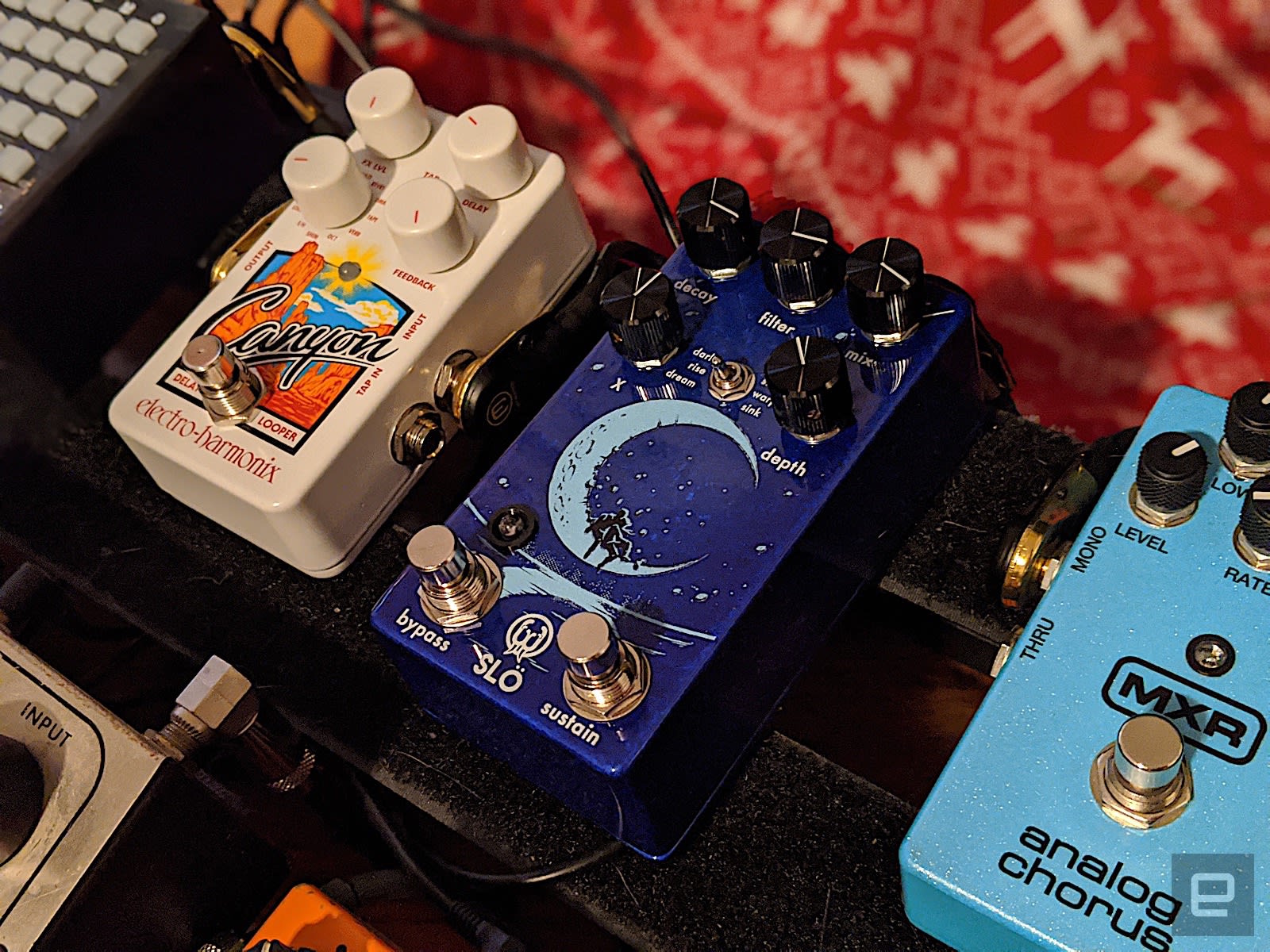 Even on the biggest sale days, you don't usually see super steep discounts on music gear. It's one of the many reasons I don't get that pumped for Black Friday. But this year I decided to treat myself and plug a glaring hole in my pedal board by picking up a Slö from Walrus Audio. By combining a few different deals I managed to snag this $200 reverb pedal for just $123. And, honestly, it would have been money well spent even if I paid full price.

I am deeply, deeply in love with the sound of this thing.

Ask most guitarists and they'll probably tell you that reverb is the most essential tool in their arsenal. But for whatever reason it was something I'd largely ignored. My amps have always had built in reverb and I had a small Danelectro reverb pedal, but frankly it's pretty useless for anything other than low-rent rockabilly.

But I've been craving a bigger sound. Something more ambient and rich. And the Slö has provided just that. It was the best selling pedal on Reverb.com that was new for 2019. And while it's a great pedal that certainly deserves the honor, it's also sort of odd because it's actually kind of a niche effect. It doesn't do your standard hall, plate or spring reverbs. It's not trying to recapture the sound of a vintage Fender amp. Instead it provides thick modulated tones that are more at home in styles of music that have "post" slapped on the front of them like post-rock and post-metal.

The Slö has three different modes -- dark, rise and dream -- that are all unique takes on one particularly epic reverb sound. Dark adds a note an octave below what you're playing. At lower levels it can add a subtle pad like vibe. To the point that you feel it more than you hear it. But when turned up (and especially when combined with fuzz) it somehow becomes both cavernous and crushing at the same time. Rise swells in the reverb behind your notes. At extreme settings it can mimic a guitar being played in reverse or being faded in with a volume pedal. A second footswitch on the pedal lets you momentarily max out the decay as well, so you can really let specific chords and notes ring out almost forever.

Dream might be my favorite of the bunch, though. It adds vibrato to your reverb which, when combined with the modulation found across all three modes can create everything from gentle waves to extremely broken record warbles. The second footswitch also functions differently in this mode, instead of momentarily maxing out the decay, it grabs a chunk of audio and freezes it. This allows you to play over a pad of your own guitar tone. It's a bit of a cliche at this point, but being able to make my guitar subtly sound like an old warped record just brings me immense joy.

The Slö manages to be surprisingly deep and flexible without being overwhelming either. The five knobs are relatively straightforward, other than X which changes based on which mode you're in to control its special feature. And part of that is due to clever design that allows you to access some secondary functions by holding down the main bypass footswitch while flicking the mode switch or turning the depth knob, to change the modulation shape and speed respectively. And also the 50/50 point for the wet/dry mix knob clearly labeled, which is huge.

Over the last few years I've fallen back in love with playing my guitar and music in general. But I have been struggling to coax the sounds I wanted out of my existing pedal collection. The Slö has solved a surprising amount of my problems, though. On its own it's a pretty formidable ambience machine. And once you start connecting to fuzzes, delays, and even other reverbs it can turn a single guitar into a vast wall of otherworldly sound. 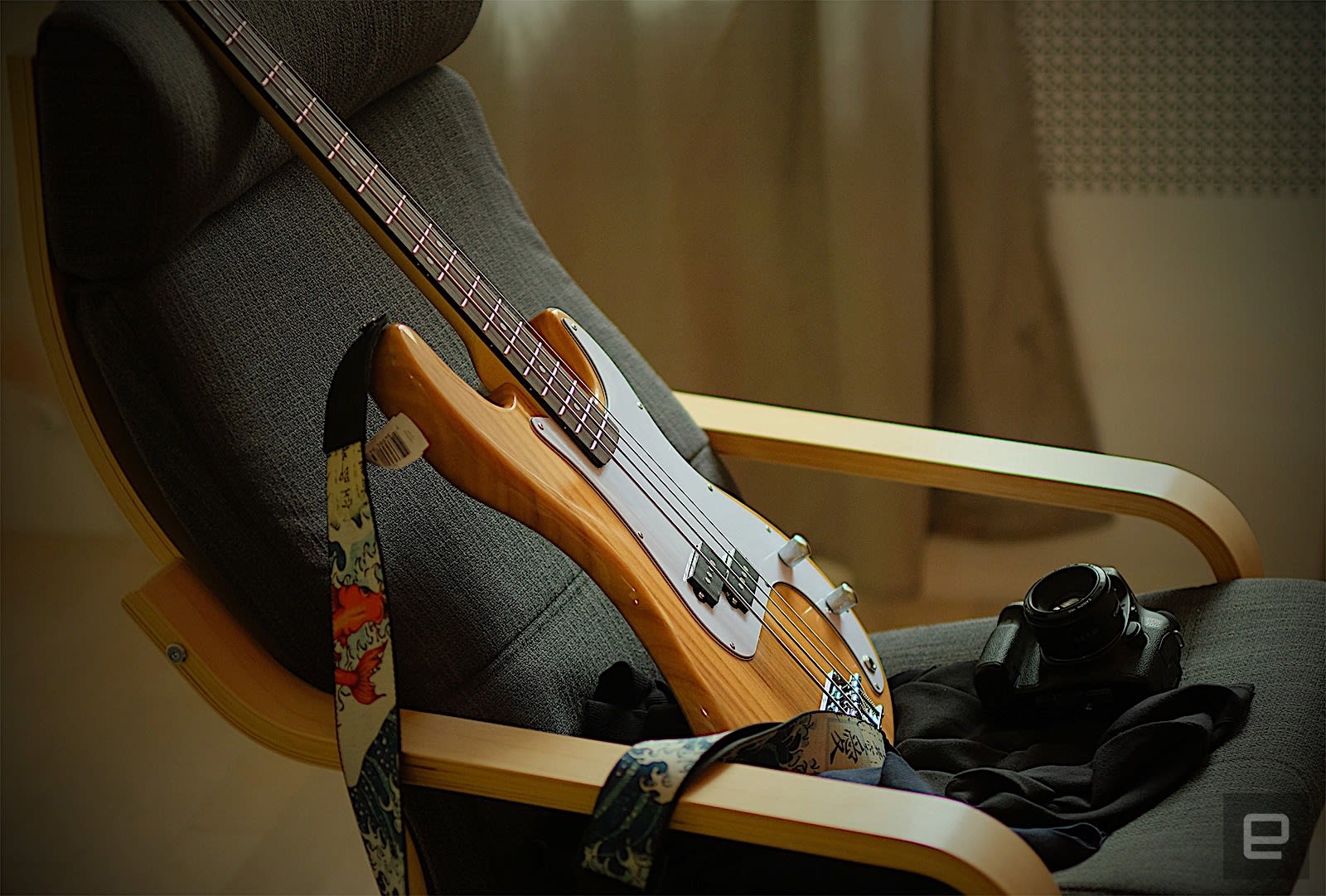 Every few years or so, I fall down some weird rabbit hole and come out on the other end wanting to buy a musical instrument. In high school, an obsession with a scream-y Japanese band called Sambomaster prompted me to splurge on an electric guitar. Then, I found myself fixated on this catchy, upbeat tune from the now-defunct National Aerobics Championships and nearly bought some synths. Now, thanks to the wonder of bass YouTubers like Davie504 and the tremendous funk band Vulfpeck, I'm the somewhat proud owner of the cheapest, most disposable bass Amazon had to offer.

A few things are worth noting right off the bat. First, the product listing has perhaps the most inane name I've ever seen — I shelled out $80 for the "Glarry Electric Bass Guitar Full Size 4 String Rosewood Basswood Fire Style Exquisite Burning Bass (Burly Wood)." I never bought an amp so I can't tell if the components are bunk, and the bass itself is almost shockingly light, which I suppose makes sense since it costs a third of what my first, largely unused guitar went for nearly a decade ago. And lastly, did I mention I am in no way a musician? I can carry a tune at karaoke (or so I like to think), but that's as far as I've ever really gotten.

Despite all that, I've really enjoyed my first few weeks as a lousy bass player. I know I'll never be the sort of multi-instrumental, Jacob Collier-esque genius I dreamed about as a kid, but there's still something immensely satisfying about getting the bassline to "Animal Spirits" mostly right. Now, noodling on the bass has become a key part of my work process. Whenever I have a few minutes to spare after vetting news stories or pinging PR contacts for more info, I'll sort of idly pick up the Glarry and practice a few licks before moving on to the next pressing issue.

At this rate, it'll probably be about 40 years before I could even think about playing alongside Joe Dart, but that's not a problem — I've already pushed aside any serious musical ambitions I had. It's too late for me. Instead, I've embraced the Glarry for what it is: A cheap thrill that helps punctuate my day with moments of unexpected joy. It might not be the best thing I've ever spent $80 on, but, well, it's damned close. Now, if you'll excuse, I need to watch some tutorials on how to strum faster.

In this article: buyersguide, gadgetry, gadgets, gear, glarry, hgg2019, irl, newbuyersguide, newirl, personal computing, personalcomputing, slo, walrusaudio
All products recommended by Engadget are selected by our editorial team, independent of our parent company. Some of our stories include affiliate links. If you buy something through one of these links, we may earn an affiliate commission.