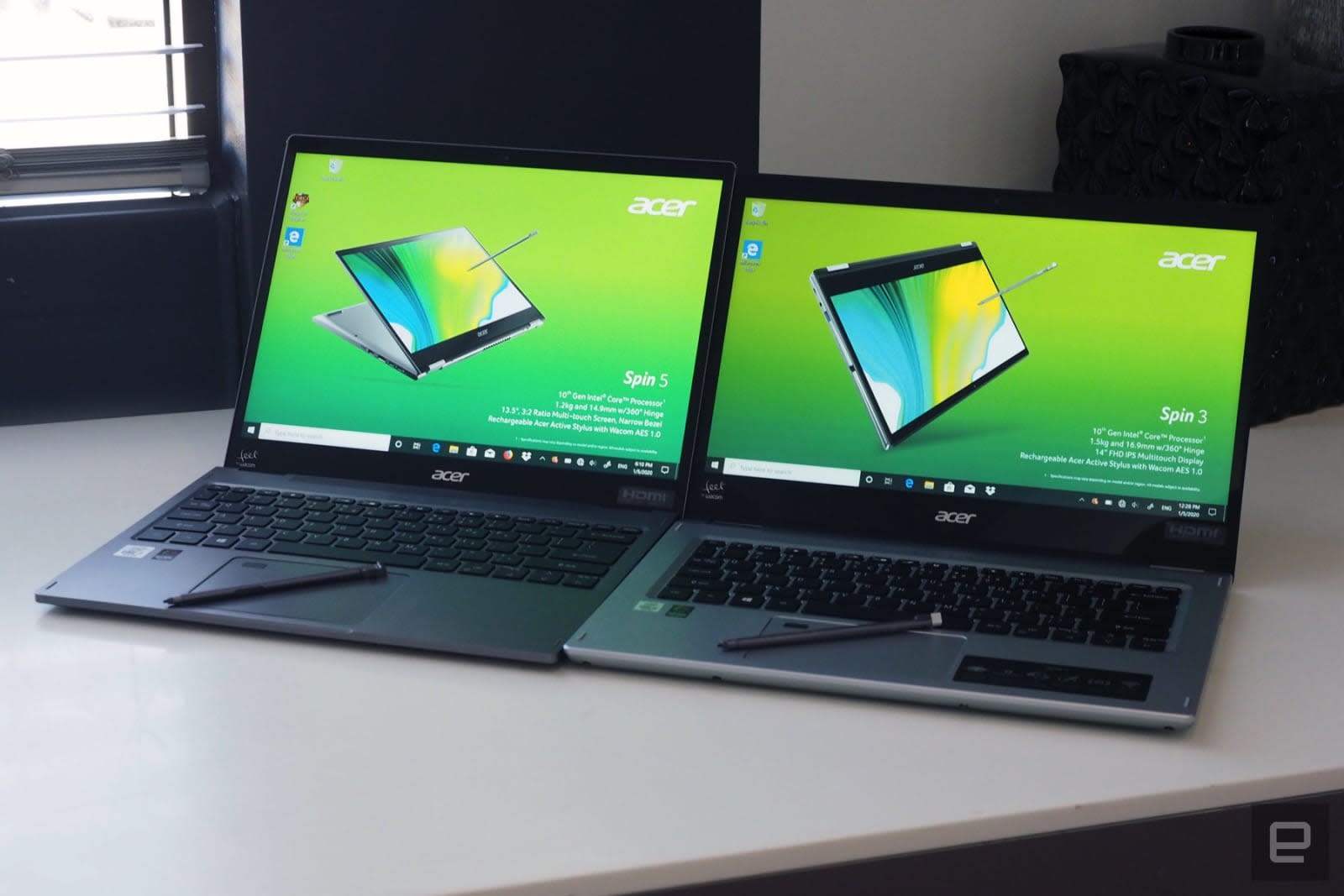 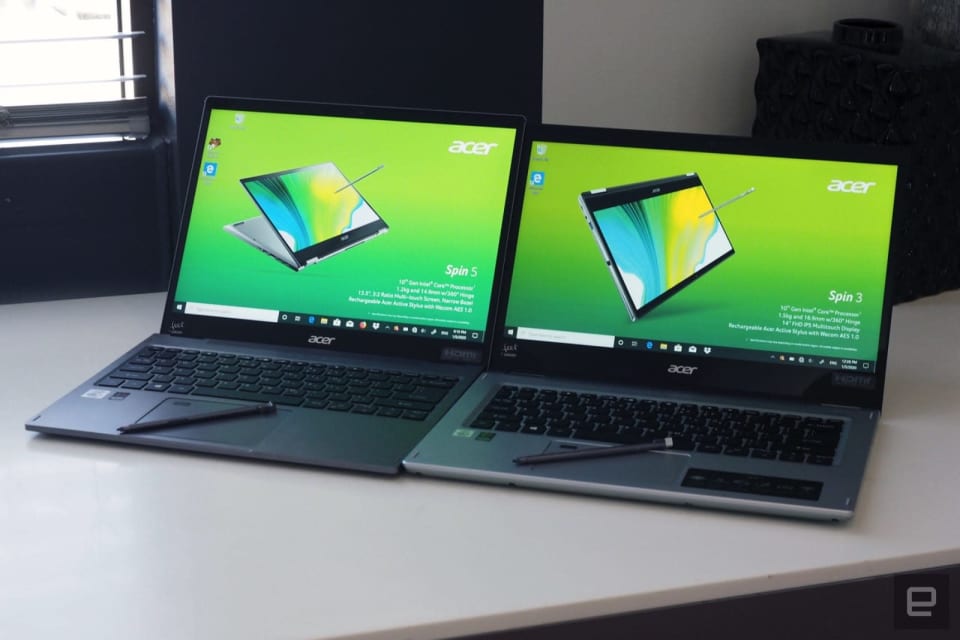 Acer's Spin line of convertible laptops are really designed for people who need flexibility but don't want to carry around too much stuff. They've never been outrageously heavy, but were never the lightest or prettiest devices. Which is precisely why the 2020 refresh of the Spin 3 and Spin 5 is so welcome. 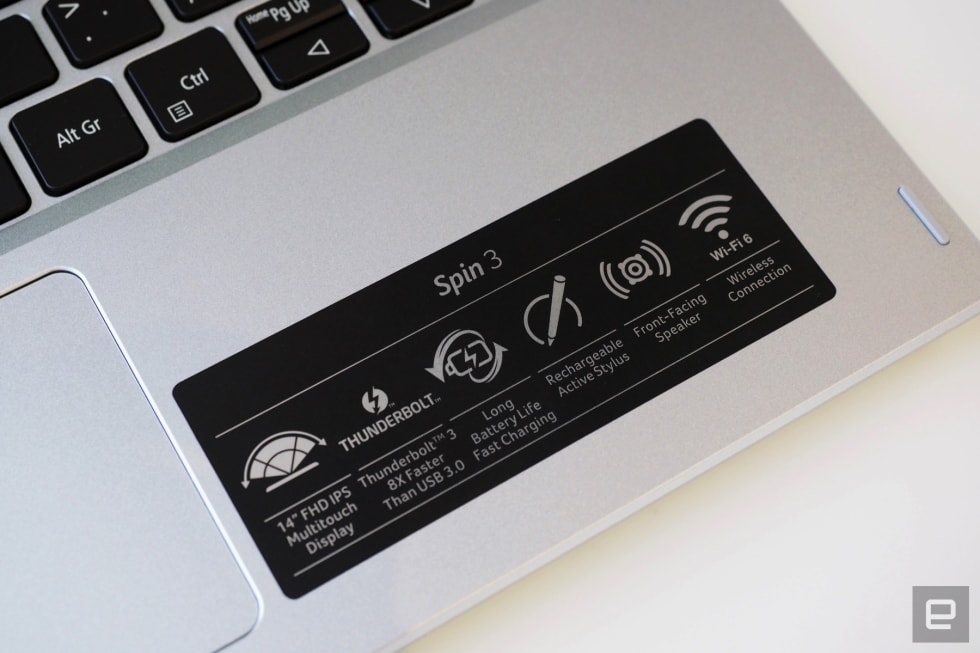 Acer's representatives claim that the company has received lots of feedback from owners of 2-in-1 devices, like the Microsoft Surface, who prefer the flexibility offered by its convertibles. Which is why it's persisting with the form even after some of its competitors have moved on. These models are primarily designed for business types on the go, who may need to type, draw or sketch in a pinch. 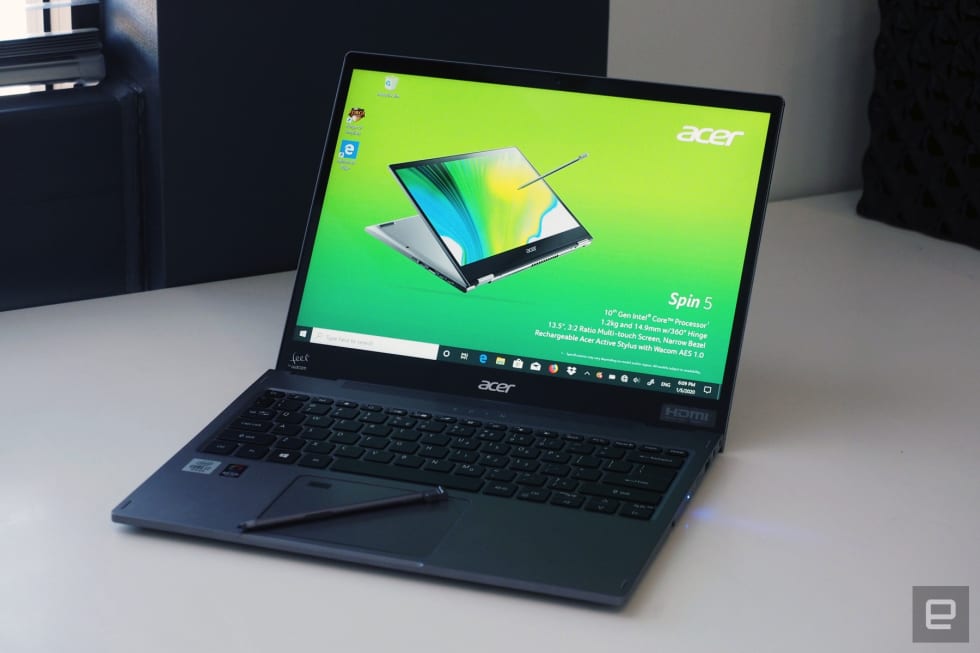 Design-wise, the company has gone with a slightly more austere look for this generation, ditching the scratchy fake-rippled aluminum styling from previous models. Both have slimmed down too, and it's especially noticeable with the Spin 5, which has lost the better part of a pound compared to its immediate predecessor. The Spin 3 hasn't received as drastic a makeover, having dropped just under four tenths of a pound compared to the 2019 edition. The 5, meanwhile, has gained the ZenBook-esque trick of using the base of its display hinge to prop up the bottom of the laptop when you push the display back far enough. 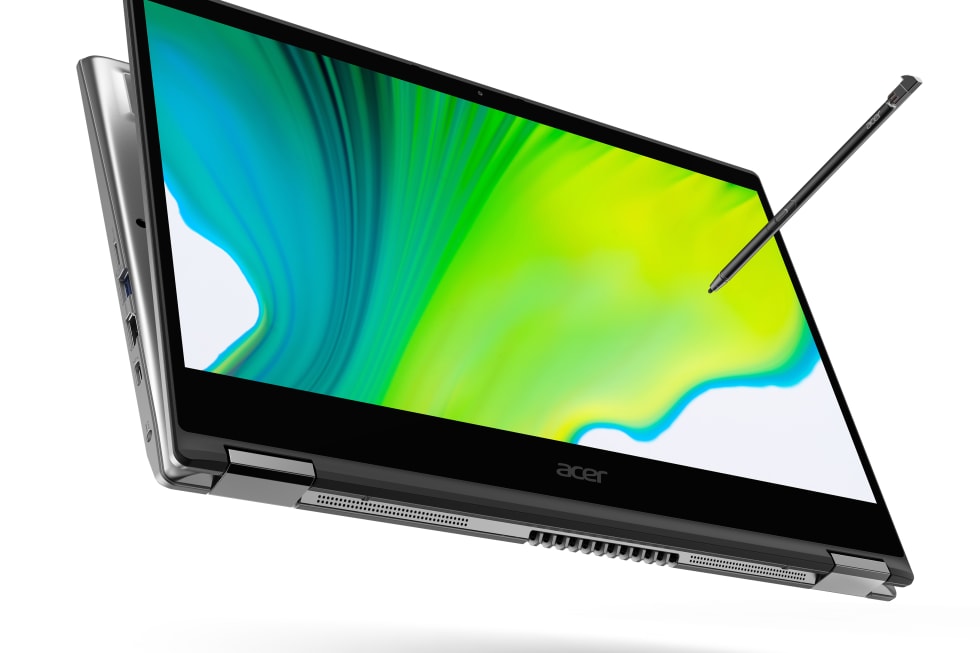 You'll get different display options for each laptop, with the Spin 5 packing a 13.5-inch 2K IPS LCD with multi-touch and AES pen support in a 3:2 aspect ratio, with noticeably smaller bezels than its predecessor. It's still not exactly a no-bezel laptop, but the borders aren't as noticeable as they were on previous generations. The Spin 3, meanwhile, gets a 14-inch 16:9 IPS HD LCD multi-touch panel that's firmly placed in the "nothing to write home about" category, especially in 2020. 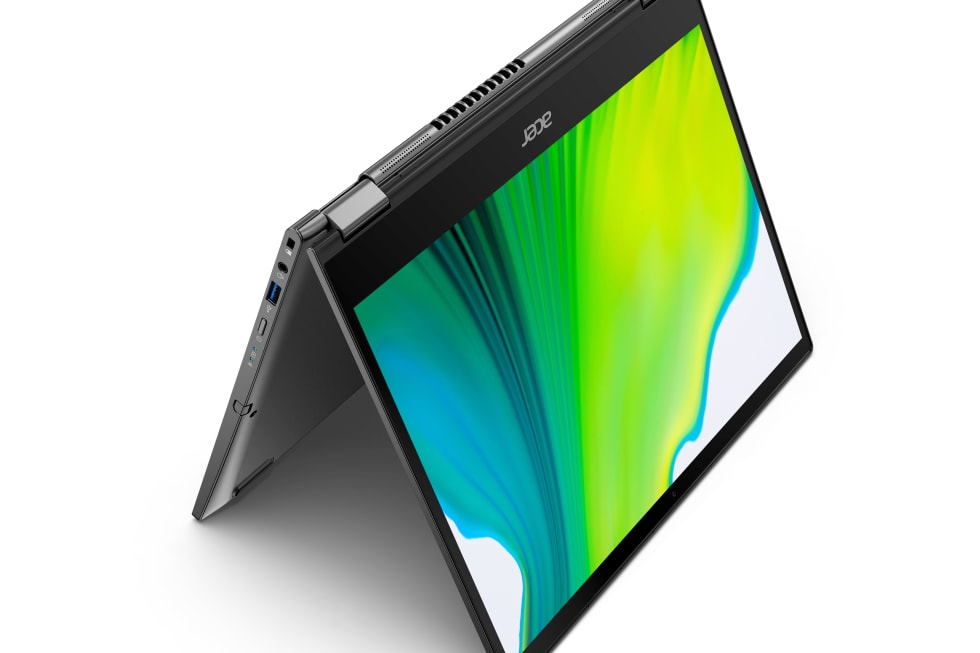 Last year, both Spin notebooks came with Alexa built-in, a feature that's noticeably absent from the Spin 3's spec sheet this time around. That said, it still has the microphones needed to support it with far-field pickup. But the only voice assistant that you may be able to use is Cortana, which may be a disappointment for some.

Both models get a fast-charging Acer Active Stylus with Wacom's Active Electrostatic technology, which now comes standard with the machine. It sits on the right hand-side, beside the IO, and resembles the Galaxy Note of old's port-styles, with a single button in the middle of the barrel. It's certainly solid enough to scratch out handwritten notes with good responsiveness and tracking, but it's not perfect.

One of the most noticeable things I noticed while testing out the models is the vastly improved keyboard, which offers far more travel. Apparently the hardware has been re-engineered so that there's a little more depth to each key, but they shrink down when you fold the laptop into tablet mode. The keys aren't the most widely spaced, but they feel solid, while the scissor-switches offer surprisingly good balance with no wobble.

I have fewer things to say about the Windows Precision trackpad, purely because Acer hasn't fixed what wasn't broken. The Swift 5 is the only model of the pair to include a built-in fingerprint sensor, should securing your laptop be a major concern.

Certainly, these are solid low(er)-end business class laptops that, while ultimately unremarkable, look like they'll get the job done. The Spin 5 arrives in the US in June, with the base model priced at $899. The Spin 3 arrives in April, starting at $699. Folks in Europe will get both laptops ahead of their American cousins, with the Spin 5 landing in March for €999 and the Spin 3 disembarking in February for €649.

In this article: 10th Gen, acer, CES, CES2020, Convertible, gear, hands-on, Intel 10th Gen, personal computing, personalcomputing, Spin 3, Spin 5
All products recommended by Engadget are selected by our editorial team, independent of our parent company. Some of our stories include affiliate links. If you buy something through one of these links, we may earn an affiliate commission.