An affordable option for those with mild hearing loss.

As wearable technology becomes the norm, there's still one gadget that carries a stigma: the hearing aid. You can wear wireless earbuds and no one flinches, but for some, a behind-the-ear device can still seem awkward. Invisible hearing aids are an option, but they're often pricey or less effective. Olive Union understands this and hopes its Smart Ear hearing amplifier — which looks just like a wireless earbud — will help squash any anxiety for those who need a little volume boost in the world.

The Smart Ear ($249) is sold as a single unit, and appears to be aimed at those who struggle in noisy situations or just want an occasional assist with their hearing. Which is to say, it's an "amplifier" rather than a hearing aid. It comes in either black or white, pairs with your phone over Bluetooth and works with a companion app. At a glance, it could be a regular true wireless earbud. It'll charge in a small cradle over micro-USB and offers up to 12 hours of talk time, or over a claimed week on standby.

I was able to try one out, and the experience is similar to a lot of "smart" hearing devices. Once charged and paired, you'll head to the companion app. The first order of business is a hearing test. It's fairly simple and similar to what you might experience at the audiologist. I will say, you definitely want to find a quiet place to perform this. My apartment is near a semi-busy road, and the passing traffic was enough for me to get distracted, opting to wait until I could find a quieter place to complete it. 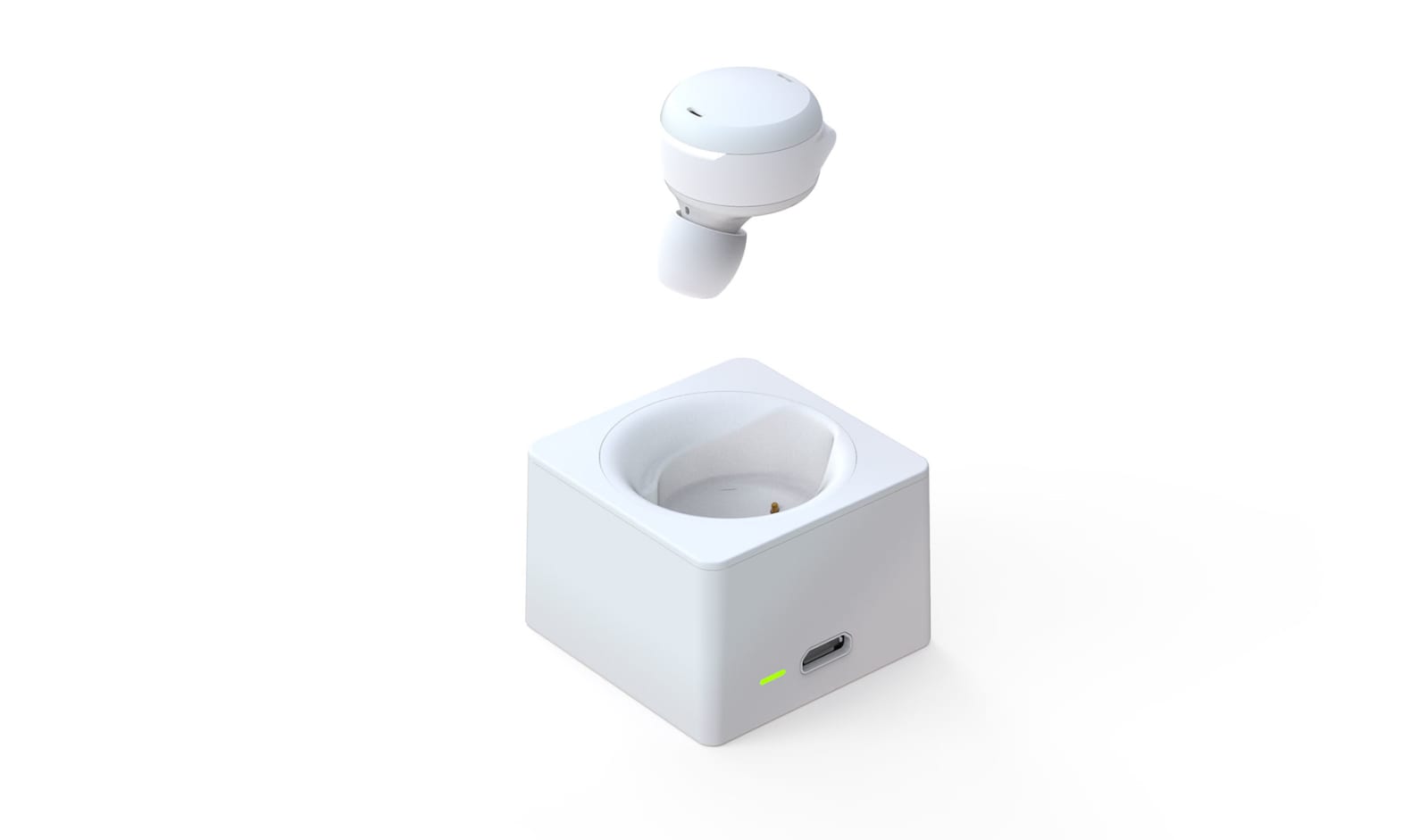 Once you're done with the formalities, it's really a case of popping it in your ear and choosing your settings via the app. There are three primary modes optimized for different situations: default, conversation and TV viewing. As usual, these mostly focus on hearing speech, but you can also use the Smart Ear for taking calls and listening to music in one ear, like a regular Bluetooth headset.

Wearing the Olive Union Smart Ear is as comfortable as most other wireless buds. That is to say, it's perfectly fine for short to medium-length periods, but I'm not sure I'd want to wear this all day. Olive Union doesn't pitch it for all-day use, though, so that's likely not the intended use case anyway.

As for the sound enhancement, I found it to be pretty good at boosting the TV and it helped with hearing people on the side where my hearing is lacking (I have about 50 percent hearing loss in my left ear). It's definitely helpful, but I found that background noises (clinking plates, a running faucet, etc.) were also boosted, and these sounds are always pretty unwelcome with an assisted hearing device, as they tend to be extra sharp or irritating. That's not to say it was a huge problem; it's just that a full hearing aid will do a better job at only amplifying the sounds you want to hear.

Similarly, taking calls works but there's an obvious flaw if you have one-sided hearing loss like I do. Given that you only have the one bud, and it's probably in your bad ear, I would instinctively prefer to use my other ear. You can, of course, remove the bud and place it in your good ear for making calls, but that slightly breaks the convenience of setting it and forgetting it.

I also had an issue increasing the volume mid-call. When I tried it, the volume actually seemed to go down. I could resolve this by ending the call, increasing the volume again and calling the person back, but that's obviously not ideal if you're the one receiving the call, or can't return their call. Likewise, the Smart Ear will stream music, but with just the one bud, it's a very lopsided experience -- more of a "you can" than "you should" feature. 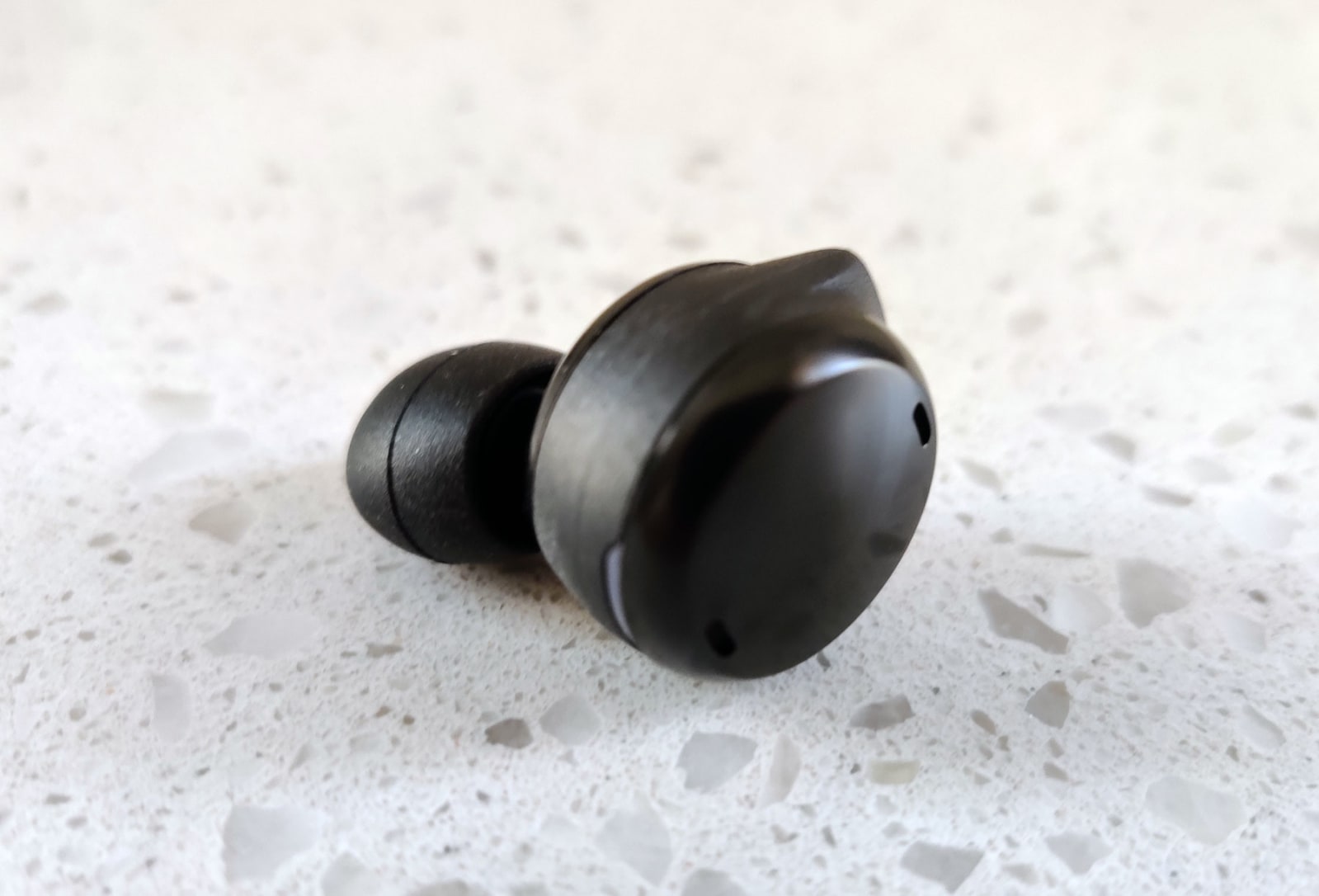 Another bugbear is the amount of feedback that it can generate. There's an option in the app for feedback cancellation, which I found I needed to have switched on all the time. It's possible that different ear anatomies might be more prone to generating feedback, but for me, with this setting off, the feedback was nearly consistent. Even with the setting activated, feedback still seemed to occur after a while and my colleagues could hear it. Reseating the Smart Ear usually solved it, but it's worth noting.

All in, there are enough positives here for the Smart Ear to be worth considering if it fits your needs. The bud was able enough to assist with my personal hearing loss. The $249 price point is significantly cheaper than most hearing aids (which typically cost $2,000 up), and the design means you won't feel like you're wearing an actual hearing aid. I do wish that the general stigma about hearing aids would disappear, and maybe it is, albeit slowly. Either way, if this is something you'd be more comfortable wearing, that's a plus.

There are a few caveats, though, which I've mentioned above. For me, perhaps the feedback is the most annoying thing. It seems to slowly creep in after a while. It only takes a second to jiggle the device, and it goes, but it's enough to be a minor annoyance. The music feature also feels a little superfluous, but it's a nice perk nonetheless.

Olive Union doesn't have an official launch date just yet, but company reps say the Smart Ear will be available at b8ta stores (and b8ta.com) soon.