AMD says over 100 laptops will use its chips this year.

AMD has taken a big bite out of the PC market over the last few years, especially when it comes to high-end workstations. Still, it's almost nowhere to be seen when it comes to laptops, especially among ultraportables and more powerful systems, where Intel dominates. This year, the company is aiming to change that with its new Ryzen 4000 chips, which combine its Zen 2 core and 7 nanometer fabrication process. The result is some of the most intriguing mobile chips we've ever seen.

Take its new flagship model, the Ryzen 7 4800U, an eight-core, 16 thread chip that'll actually fit into a ultraportable notebooks. Intel, meanwhile, currently tops out at six cores with its 10th generation Core i7-10710U processor. The 4800U will run between 1.8GHz and 4.8GHz, and feature eight Radeon graphics cores. It's around 90 percent faster than Intel's Core i7-1065G7 chip (its highest end 10nm chip, which only has four cores) in the Cinebench r20 benchmark, and around 28 percent faster in the 3DMark TimeSpy benchmark.

You could argue this is a bit of an unfair comparison, since Intel's six-core Comet Lake chip is certainly more powerful than its quad-core sibling. But the six-core chip is also stuck with Intel's older (and much slower) integrated graphics, making it no match for the 4800U's bundled Radeon Cores. 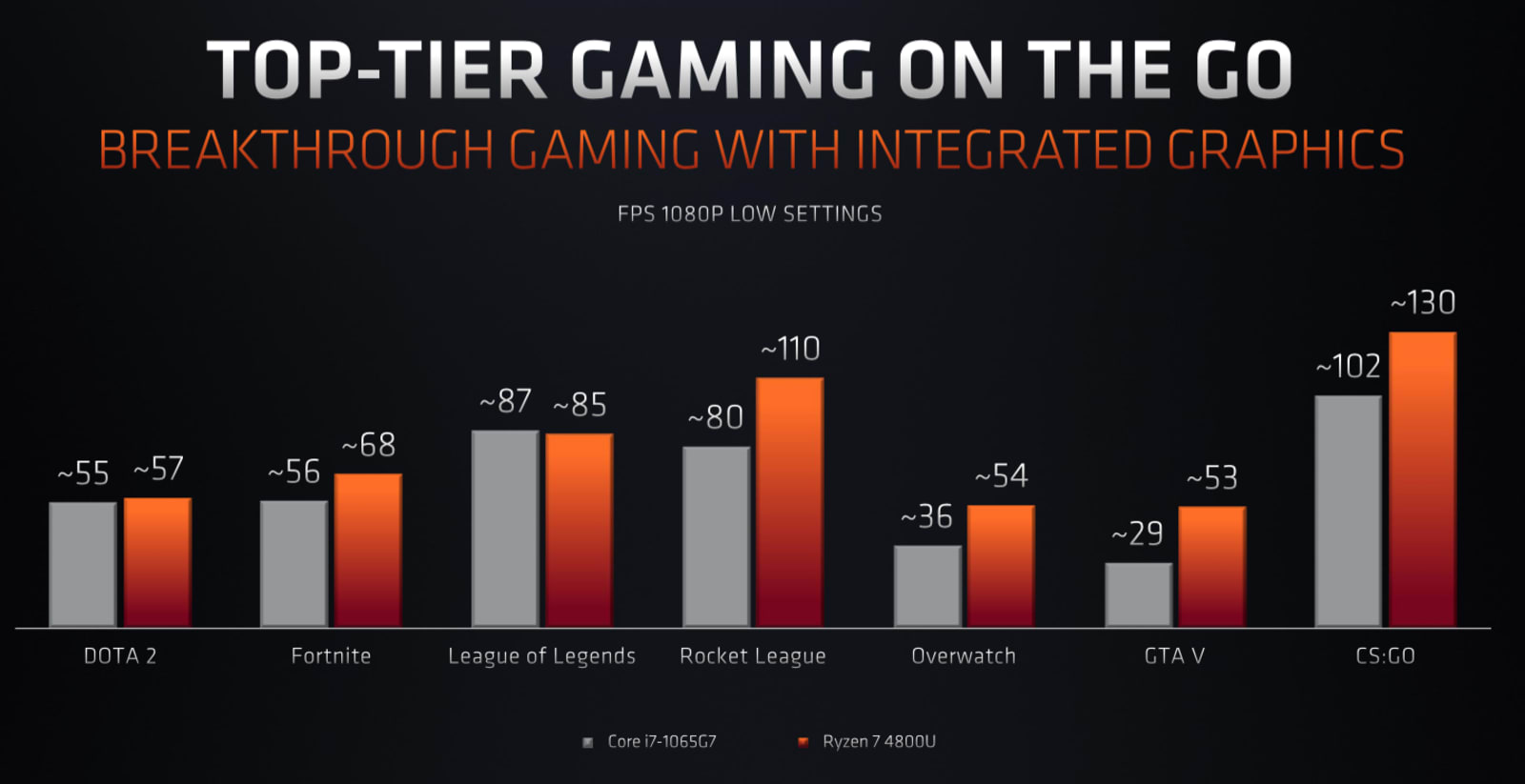 Not surprisingly, AMD also says the 4800U trounces Intel's 1065G7 when it comes to gaming. It's around 30 frames per second higher in Rocket League while playing in 1080p with low settings, and it can even reach 54FPS in Grand Theft Auto V. Intel has made great strides with its Iris Plus graphics, but it's still no match for AMD's Radeon tech.

Even if you don't go for the best of the best, you'll likely see some nifty performance benefits with the rest of AMD's Ryzen 4000 "U" ultraportable lineup. You'll also get eight cores with the 4700U, just without hyperthreading, and six cores with its mid-range options. 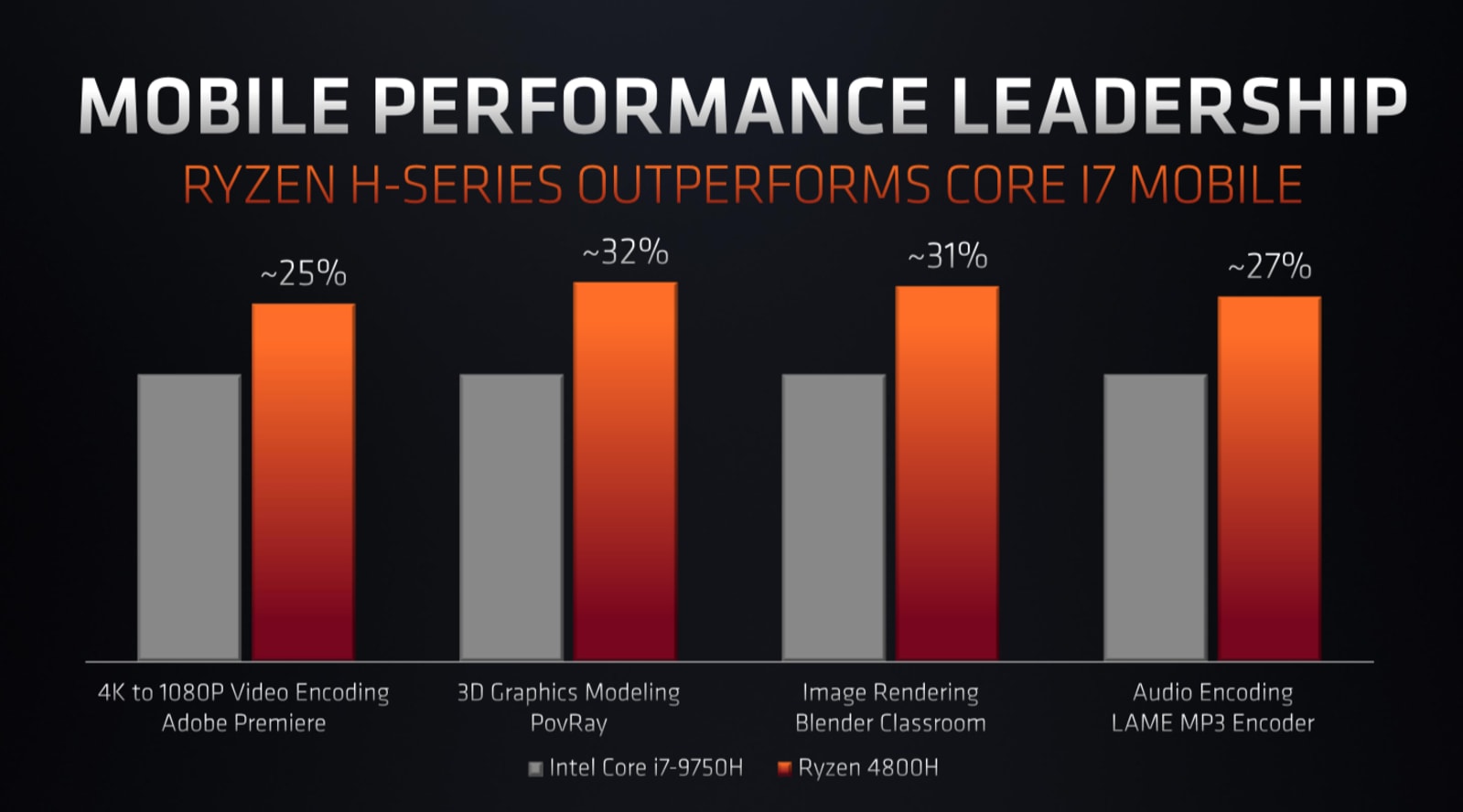 AMD claims the 4800H is 39 percent faster than Intel's Core i7-9750H mobile chip in the 3DMark FireStrike Physics test. Even more impressive, it even outpaces Intel's i7-9700K desktop chip, which is only 26 percent faster than the 9750H in the same benchmark. Similarly, the 4800H is 46 percent speedier than the 9750H in Cinebench r20, whereas Intel's desktop chip only has a 36 percent lead over its mobile sibling. If those numbers are making your head spin, don't worry -- just know that the 4800H is going to bring a whole new level of performance to notebooks this year. (No wonder Intel tried to steal AMD's limelight by mentioning its mobile chips will go beyond 5GHz.)

While we'll definitely see plenty of Ryzen gaming notebooks with NVIDIA graphics, AMD is also working on technology that'll convince computer makers to go Radeon instead. Its SmartShift tech will let laptops intelligently manage power levels between AMD chips and discrete Radeon cards, allowing them to boost GPU or CPU speeds when they need a bit more juice. That feature alone led to a 10 percent speed boost in The Division 2 and a 12 percent bump in Cinebench r20.

You can expect to see the first wave of Ryzen 4000 laptops this quarter. Notably, AMD says its chips will be in more than 100 systems in 2020. That's a huge leap ahead from last year, and it's a good sign for the laptop market as a whole. Now that AMD is finally spinning up its ultraportable prowess, maybe Intel will finally deliver more capable 10nm parts.