Ergatta isn't the first connected rowing machine, but it is the prettiest

Rowing isn't a particularly cool or accessible sport. The real thing -- pulling oars through water -- is an expensive hobby, requiring access to a boat, a crew and a suitable body of water. You could try a rowing machine in the gym, but even rowers who love rowing tend to hate rowing machines. I should know: I rowed all through college, and for a few years after.

And yet. Over the past year I've seen at least two connected home-rowing machines that attempt to make this repetitive, sometimes grueling sport feel more fun. First was Hydrow, what you could fairly refer to as the Peloton of rowing machines. Today at CES I had a chance to take some strokes on the Ergatta Digital Rower. The Ergatta is decidedly not a Peloton equivalent, or so the company's founders insist. When you scroll through the ergometer's 17.3-inch screen, you don't see group classes. You see workouts dressed up as games. It's up to you if you want to compete with yourself or other users who have completed the same workout recently.

Gallery: Our first look at the Ergatta Digital Rower | 18 Photos

This being Engadget, I'd like to pause here and say a few words about the hardware. This is important, because the machine is gorgeous. Other than the electronic bits, it's made of cherrywood, sourced and built in the US. (The company itself is based in Williamsburg, Brooklyn.) This is a tank-based machine, with a globular, glass-like container at the bottom. Ya know, to simulate the real thing: rowing on water. It also makes for a smoother rowing experience, as I found in my demo.

Two of the company's founders, Tom Aulet and Alessandra Gotbaum, say the machine was designed to look like furniture. (A third founder, Prasanna Swaminathan, was not present for my demo.) I'm not sure you'd ever mistake an erg for a chaise lounge, but there's no question it's a stylish, high-end product. Like other rowing machines, it can be stored vertically. I didn't attempt to lift it myself, but Gotbaum, a much more petite woman than I, could do it with ease.

Once you adjust the foot straps and settle in, it's time to scroll through the screen, which I found to be sharp and brightly colored, with dark blacks throughout. (Indeed, much of the user interface has a black background.) There are three modes to choose from: Guided Row, which features individual challenges; Eregattas, which pits you against other users in simulated, asynchronous races; and Open Row, which is a more freestyle mode. As you continue to use the machine, it recalibrates both your goals and also its choices as to which other users you should be ranked against -- a merciful touch from ye olde robots. 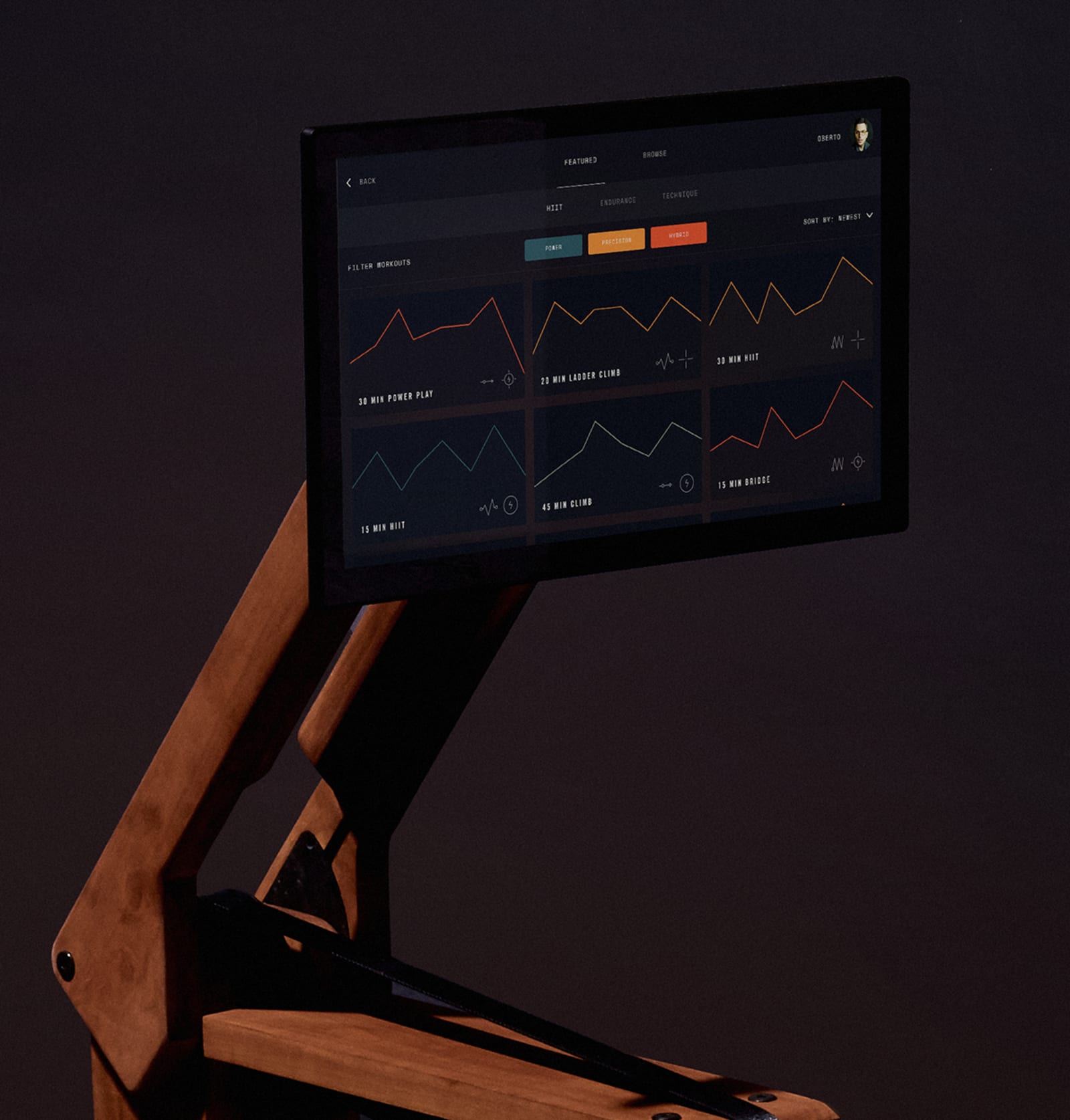 To my initial surprise, neither Aulet or Gotbaum considered themselves rowers per se before they founded Ergatta. Aulet was a runner whose knee injuries made it clear he needed a new sport. For the pair, rowing was an effective and safe full-body workout -- safer than, say, running. (As a marathon runner myself, I can't say I disagree.) In other words, the machine was built by people who love the activity of rowing and mostly know it as an indoor sport.

I think this shows in the user interface. The founders say they were aiming for a gamified interface that didn't feel cartoonish. I think the flip side is that other than the water tank on the front of the machine, there are few reminders that rowing is a sport meant to be performed on the water. Whereas Hydrow shows you prerecorded first-person videos shot on a river or in a harbor, Ergatta shows you white lines on a black background, representing your lanes in a race. In Open Row mode, your progress is presented not unlike a bar graph. The UI is elegant, and it is gamelike. It just doesn't remind me of one of the things I like best about the sport: gliding through water. But for people who only ever knew rowing as an indoor sport and find typical rowing machines as dull as other rowers and I do, this is clearly the more engaging experience. 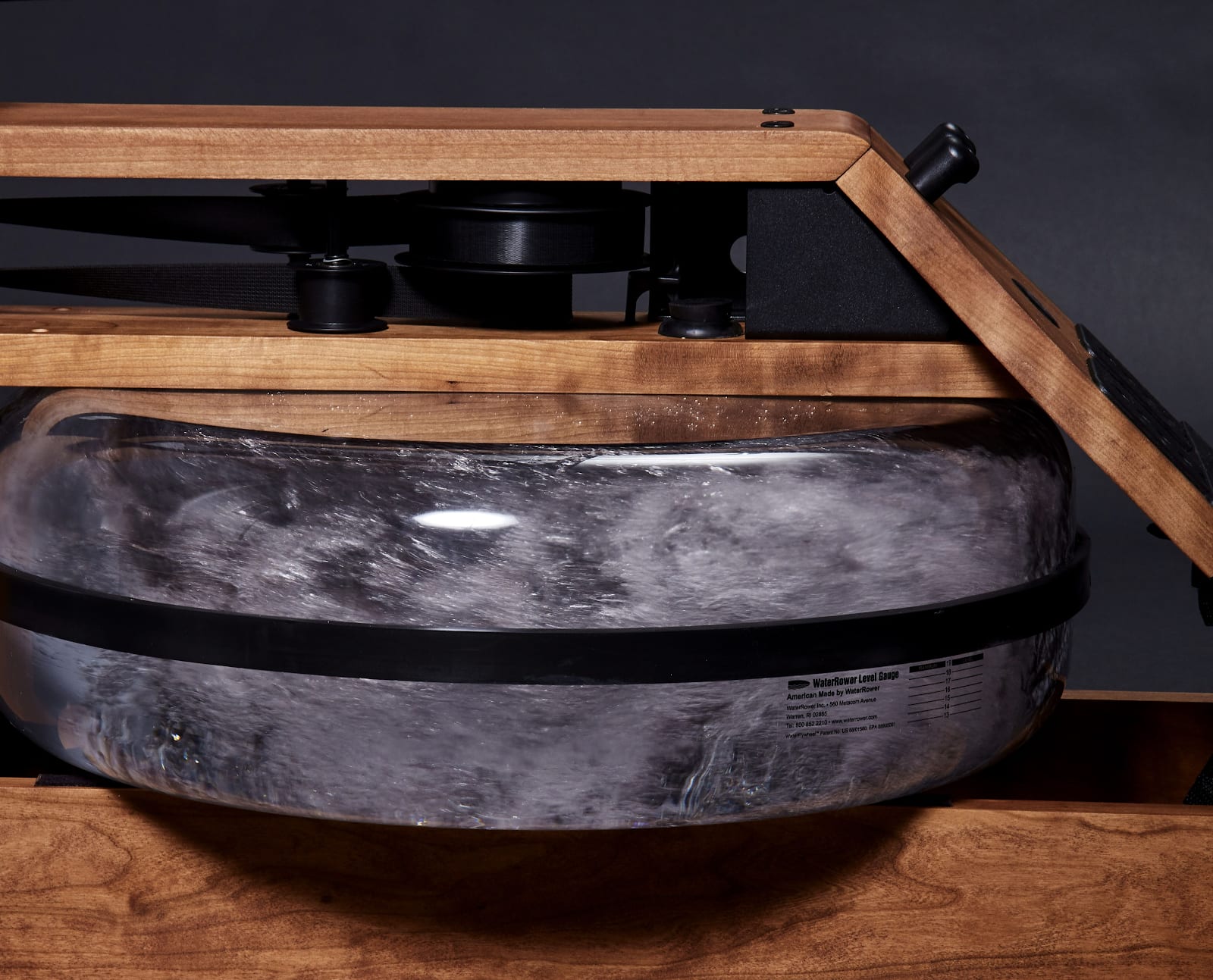 My other concern anytime I test a digital rower, whether this one or Hydrow, is that rowing requires a more complicated technique than, say, running or spinning. Without training, who will teach you? If there's no teacher and if the machine is expensive (it always is), is this meant only for committed rowers? People who know they like rowing? Both companies say not necessarily. Ergatta, like Hydrow before it, seems to want to evangelize this somewhat-obscure sport to people who may not have tried it and who might otherwise be intimidated by the lone ergometer in the corner of their gym.

As someone who loves rowing, I still suspect that's a tall order. Rowing machines by definition take up space. Even the quiet ones are noisy. And they are expensive. The Ergatta is available for for pre-order starting today at a discounted price of $1,799. It will cost $1,999 when it ships in March. If you buy this, it's because you love rowing -- indoor rowing -- and you know this is the prettiest machine you'll find.