I skipped breakfast, but Samsung had a robot make me a salad

Normally when I miss breakfast, it's by choice. Today, it was because I was in a rush to get to Samsung's booth on the CES show floor and see if I could get any face time with the company's cute new rolling robot. (That, uh, didn't go so great.) The trip was still well worth it, though, because I got to eat a tofu salad partially made by a pair of robotic arms slung from the bottom of some kitchen cabinets.

Today's meal came courtesy of Samsung's Bot Chef, which the company affectionately refers to as a "cobot," or collaborative robot. Despite its name, Bot Chef isn't meant to prepare your meals from scratch, though I wouldn't be surprised if it could. Instead, you're meant to work side by side with it: Bot Chef can download and display recipes on a nearby screen so you could mutually participate in meal prep. Since Samsung couldn't procure the permits needed to have open flames on the show floor, today's recipe was pretty basic, but it still deftly diced a block of soft tofu and pushed them around an oiled-up frying pan with a spatula. All it took was one voice command to set the whole thing in motion. (A nearby human did, however, prepare a bowl of shredded greens.)

Gallery: Eating a salad made by Samsung's Bot Chef | 9 Photos

Robot arms are no stranger to CES, but seeing these two multi-jointed, three-fingered hands handle prep work, manipulate bottles of oil and open cabinets in search of ingredients was impressive all the same. And even at this early stage, Samsung's built-in safety measures seemed on-point -- when a human assistant's hand got too close to the tofu-slicing blade, Bot Chef smartly saw it coming and stopped. That's not to say kitchen accidents will completely become a thing of the past once a Bot Chef is installed, but its arms move slowly and deliberately enough that maiming seem pretty unlikely.

More importantly, Bot Chef can also connect to the internet and download new skills, like the ability to operate what appeared to be a Nespresso coffee maker. Obviously, it's going to take quite a bit of work on Samsung's part -- not to mention some degree of cooperation from kitchen gadget makers --to really flesh out the Bot Chef's skill set. Even so, it's nice knowing that the money you'll eventually drop on these robot arms will net you more expertise than you'll get right out of the box. 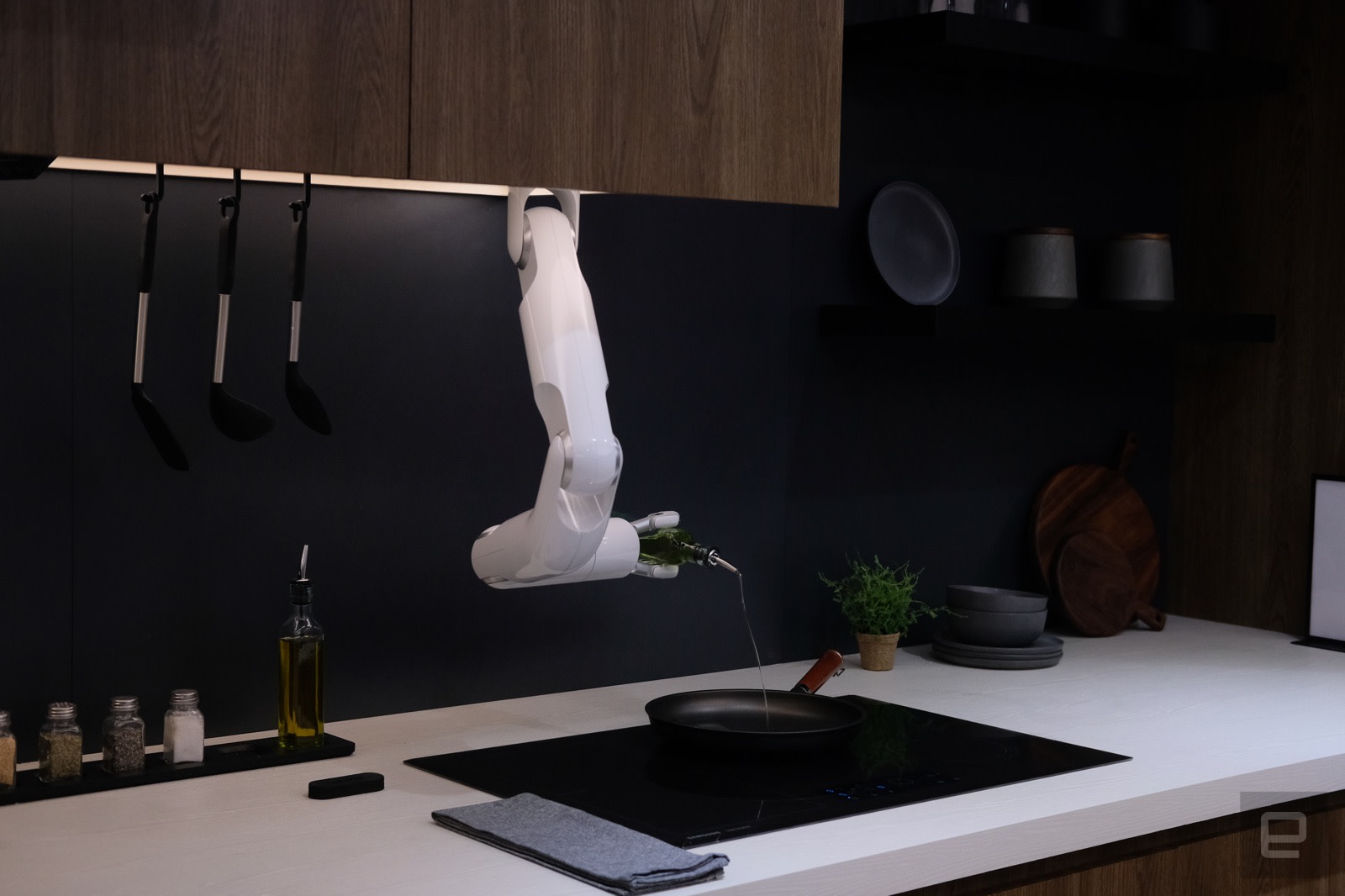 Speaking of buying a Bot Chef, Samsung (understandably) doesn't have a firm launch window in mind yet. Samsung did say, however, that it engineered these arms with accessibility in mind -- in other words, they're not supposed to be super expensive. Think refrigerator money, not kitchen renovation money. That's still a pretty wide range for Samsung to play, but it's at least nice of the company to recognize that the true value of oddball smart home products is in making life a little easier for everyone, not just the well-heeled.

Oh, and that salad? Not bad! The human attendant told Bot Chef to leave out sesame seeds in favor of some Sriracha, and the end result could've used a bit more texture. Since Samsung didn't have any cutlery on hand -- it clearly didn't expect anyone to want to eat the results -- I'm glad Bot Chef's recipe didn't involve any thick, creamy dressings I'd struggle to clean off my hands. Salad standards are a very personal thing, and you might not like the results as much as I did, so I'll say this: If Samsung sold these things for $12 a pop in New York City, I don't think most Manhattanites would find much to complain about.