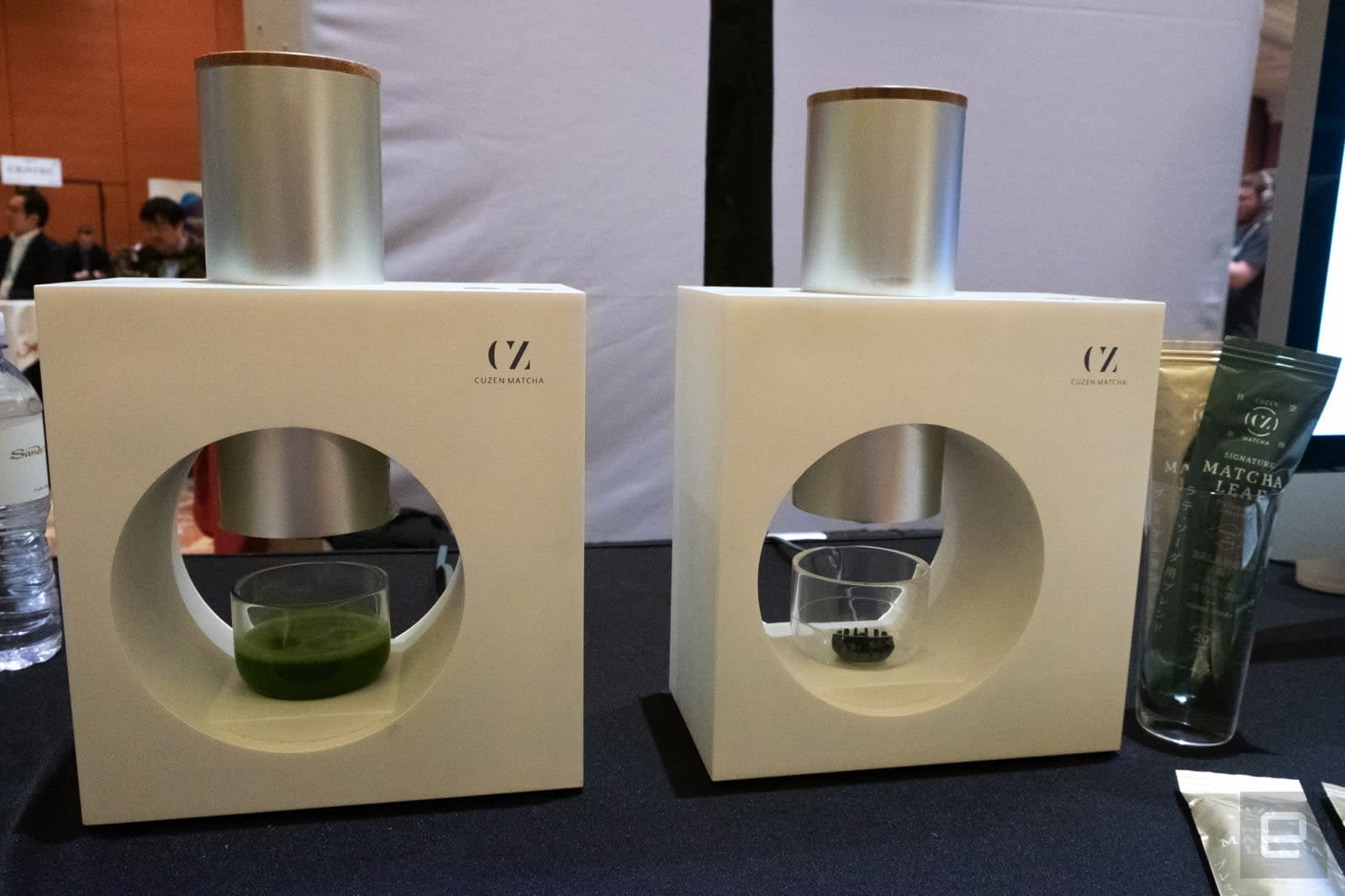 Brewing matcha the traditional way can be a bit of a pain. Not only must you get the water temperature just right, you also have to spend some time whisking the matcha powder to get everything blended properly. Even then, it's all dependent on the quality of the matcha, as lesser quality brands can have an off or bitter taste. Cuzen Matcha, however, has come up with an alternative solution. It's a matcha machine that doesn't just "whisk" the matcha for you with a magnetic spinner, but it also has a built-in mill that grinds whole tea leaves directly into the cup. The result is a surprisingly clean and refreshing matcha, with none of the bitterness. 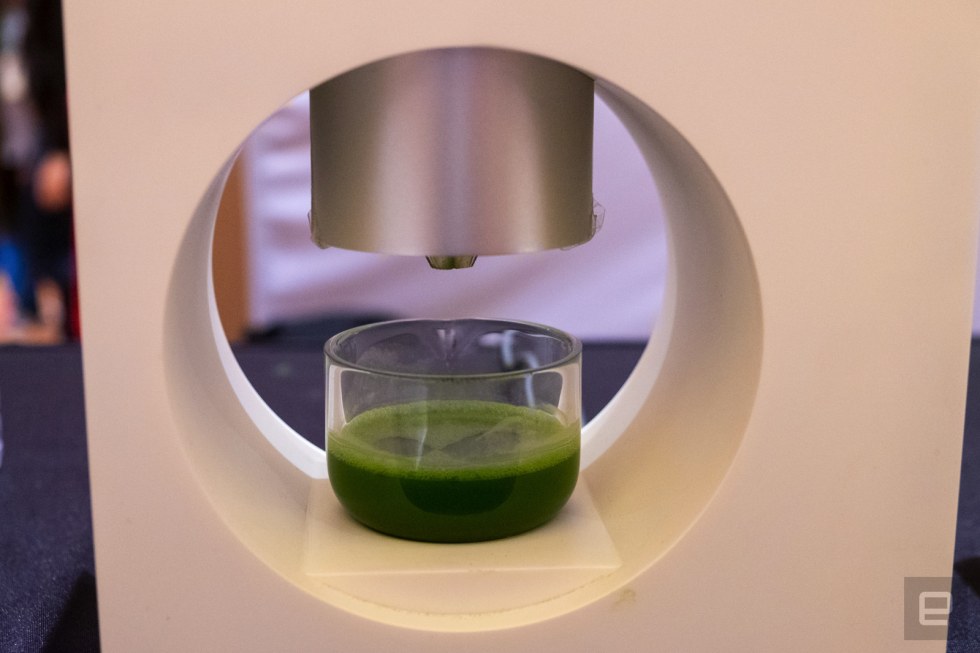 A Cuzen Matcha spokesperson showed me how it works in a demo at CES. You'd pour some tea leaves from a packet into the top canister, then select the strength level you want (you can choose up to three levels). You'd then pour some cold water into the cup below -- yes, this is meant to be a cold brew, rather than a hot one. Once you hit the start button, a tiny magnetic stirrer inside the cup rotates at an even speed, which replicates the actions of the traditional bamboo whisk. The tea leaves are then milled and dispensed into a fine powder into the water. In just a few seconds, the matcha is ready. 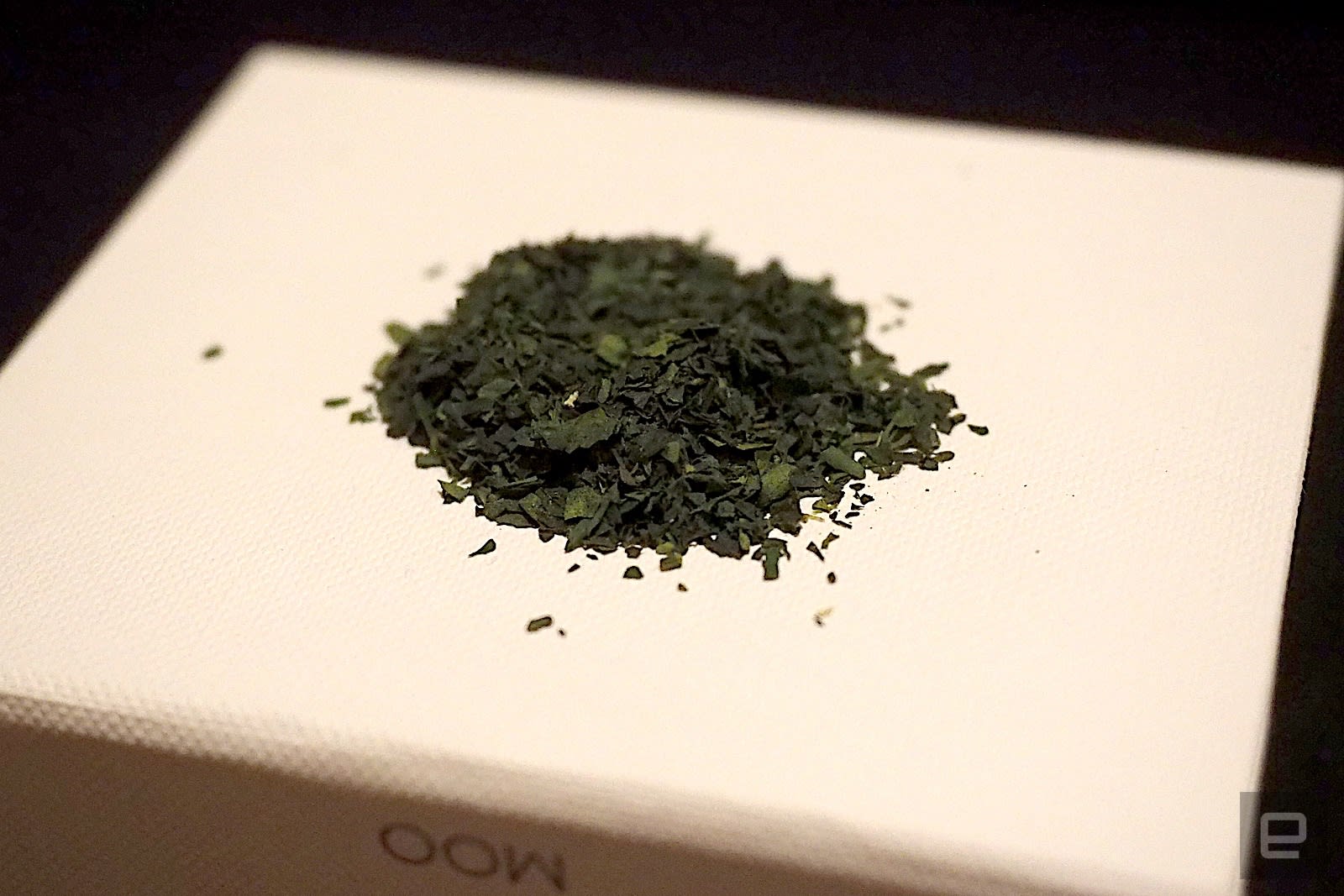 I had a taste of this cold matcha "espresso," and it is incredibly smooth and rich, with absolutely no bitter aftertaste. The tea I drank was part of Cuzen's Premium line that promises a "smooth and umami-rich" flavor. It also offers a Signature blend that is not quite as premium, for those who prefer mixing their matcha with milk for lattes, or maybe hot water for a sort of matcha "Americano." One packet of Cuzen tea leaves will yield about 20 or so cups each.

And that's the caveat with the Cuzen -- not many companies, if any, offer matcha leaves. Most matcha makers in the world sell powders. That means that in order to use the Cuzen Matcha, you'd also have to buy the tea leaves directly from them. It hasn't decided on which business model for its tea leaf packets yet. A spokesperson said they're considering charging around $1 or so per cup (so that's around $20 per packet), or maybe a subscription model where you pay a monthly fee for a few packets.

If you feel like having seriously great matcha without any of the effort and you have the cash to spare, then the Cuzen Matcha machine might just be for you. You can pre-order one right now, and it comes bundled with two packets of Premium and three packets of the Signature blend. The full retail price is somewhere around $420, but if you pre-order it now, it's $290. That's a lot of money, but serious matcha drinkers might think it's worth it.

Update 4:34pm ET January 8 2020: A spokesperson wrote in to clarify that the price is $1 per cup, not per packet. The optimal size of a packet has not been decided just yet. It's currently 20g, or 20 cups of matcha shot.

In this article: ces2020, cuzen matcha, food and drink, food-and-drink, foodanddrink, gear
All products recommended by Engadget are selected by our editorial team, independent of our parent company. Some of our stories include affiliate links. If you buy something through one of these links, we may earn an affiliate commission.