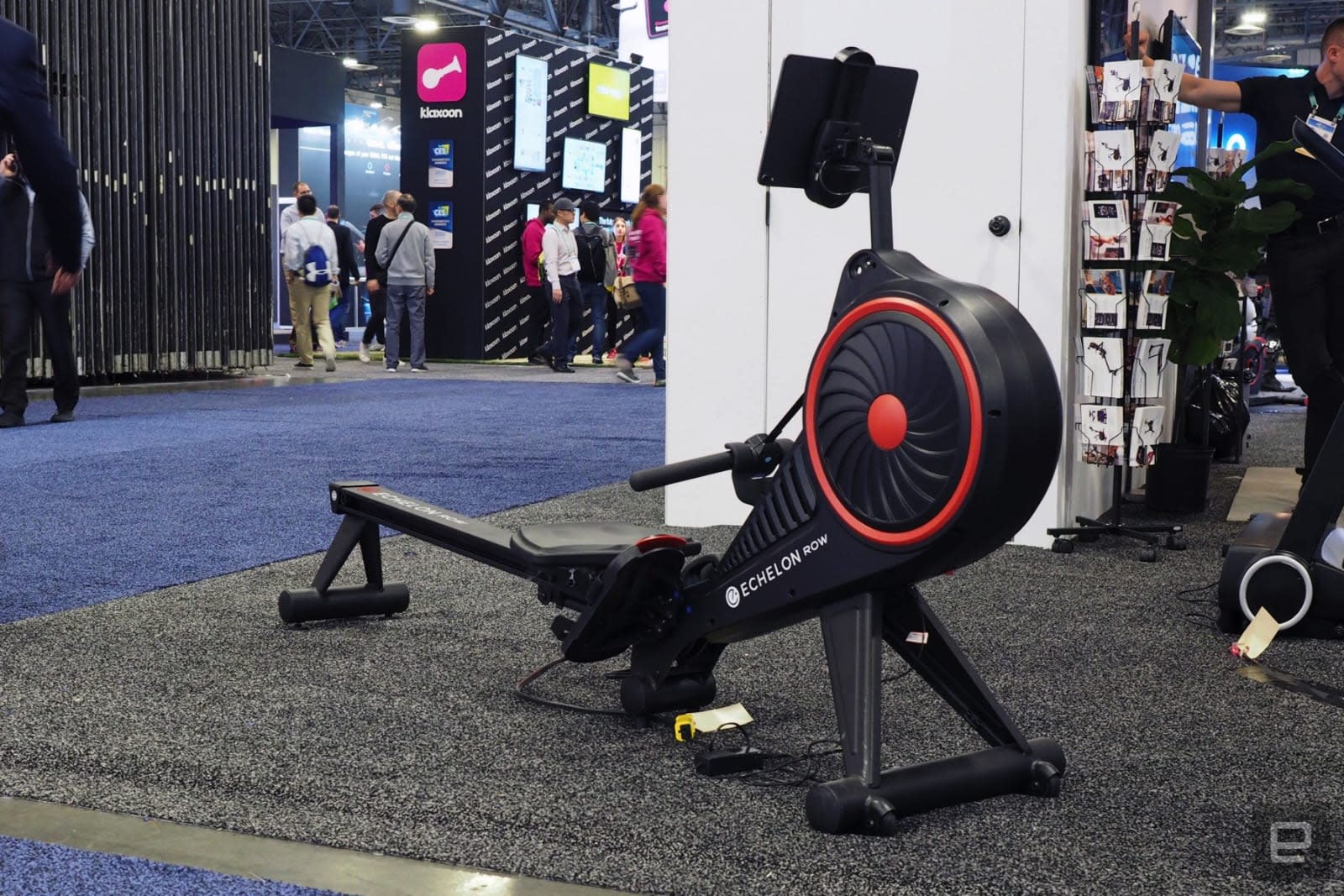 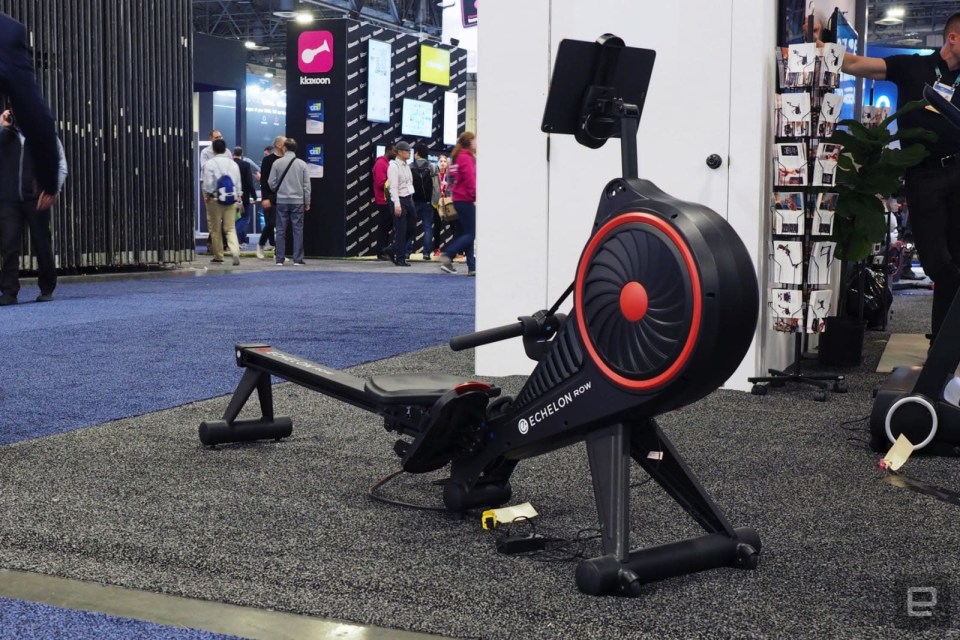 If you've heard of Echelon, it's probably in the context of its cheaper-than-Peloton connected spin bikes. The company also makes smart exercise mirrors, and here at CES, it was showing off its forthcoming Echelon Row rowing machine. After spending a few minutes on the show floor rowing, I think I might be smitten with this quite affordable, pretty clever machine, which is a world away from what I'm currently using. 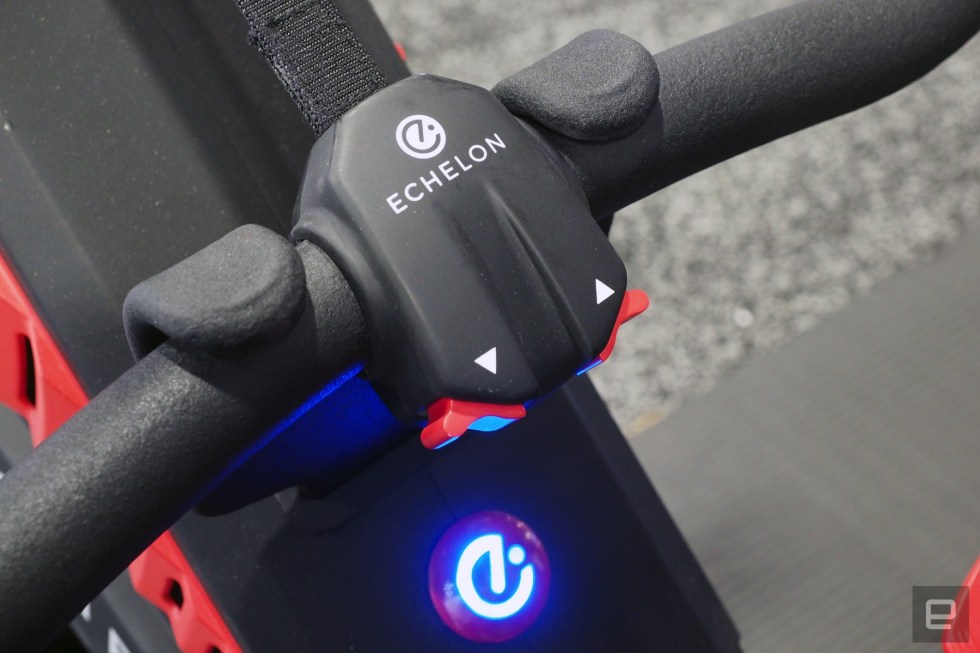 At first blush, Echelon Row looks like an air rower, but it's actually using mechanical resistance, with the grab connected by a woven nylon strap. So far, so Hydrow, but unlike that machine, the Echelon has one genius tweak: You can dynamically adjust the resistance from the handle. Two buttons close to your thumbs can run through 32 different resistance levels without you needing to stop rowing.

That's a lot better than most rowers, which require you to do some awkward reaching or need you to stop your session altogether to move a fan cover to make your row easier or harder. Combined with the woven nylon belt, you'll be able to use the machine for rowing as well as some upper-body exercises.

Echelon Row comes in two models, a headless version that'll need you to use a tablet as a display or one packing a built-in, 22-inch HD touchscreen. Go for the latter and you'll be able to reorient the screen to portrait and also to flip over and away from the rower for floor-work classes. Those are, of course, available to Echelon users on demand for a $39.99 monthly subscription fee. I'm told by the company's insiders that the screen will, at some point in the future, get the ability to run Netflix while you row.

You'll also get the option of preprogrammed rows down rivers, and I sampled a trip that had me rowing down a river in Thailand. It's a weirdly relaxing experience, especially when you're in the middle of a bustling trade show hall. The machine is also relatively clever in how it folds away, since it'll let you leave the body in place but pull the track up to store vertically. It's a neat halfway stage between storing the whole thing up against a wall and leaving it across the floor to trip over.

The Echelon Row is expected to start shipping at the end of January, and in the meantime, the company is running a discounted pre-sale on Indiegogo. For $839, you can get the headless rower and a month of membership to the company's subscription service. If you don't want to buy early, then you can expect to pick the headless version up for $1,339 and the screen edition for $1,599, which is a lot cheaper than some of the alternatives.

In this article: bestofces2020, ces, ces2020, Echelon, Echelon Row, Ergometer, gear, hands-on, home, Peloton, Rower, Rowing Machine
All products recommended by Engadget are selected by our editorial team, independent of our parent company. Some of our stories include affiliate links. If you buy something through one of these links, we may earn an affiliate commission.