Nura burst onto the headphone scene a couple of years ago with the Nuraphone. With its app-based hearing test for customized audio, haptic bass, noise cancellation and over-ear-but-still-in-ear design, it was clear the company never received its copy of the rule book. This was confirmed when it revealed its $199 NuraLoop buds that are both wired and wireless (depending on your preference), claim a solid 16 hours battery life (in Bluetooth mode) and, of course, come with the same automatic hearing test to adapt their sound to your hearing.

It's been exactly a year since the NuraLoop was announced, and it's finally here after being on pre-order ($199) for the past 12 months. Along with the aforementioned features, there's active noise cancellation, touch controls and "social" (transparency) mode. This pretty much makes the NuraLoop a tiny facsimile of it's bigger, older sibling -- bar one thing. Immersion mode is still here -- a feature I really enjoyed in the Nuraphone -- but it's not as impactful as before (thanks, physics).

Perhaps more interesting is that the Bluetooth, yet conjoined, NuraLoop enters a market saturated with true wireless earbuds. I asked the company if it considered dropping that last wire, and a representative told me that NuraLoop wanted to make a headphone that also worked as an in-ear monitor. Thus that cable was essential.

While there are many interesting features here, arguably Nura's main selling point is the customized audio. The first time you pair the headphones with the app, you'll be prompted to take a hearing test. Fortunately, you don't actually need to do anything (unlike with most rival products): The app will do it automatically using otoacoustic emission. Once the app has generated your hearing profile, the headphones equalize the music to make up for the frequencies where your hearing isn't perfect. 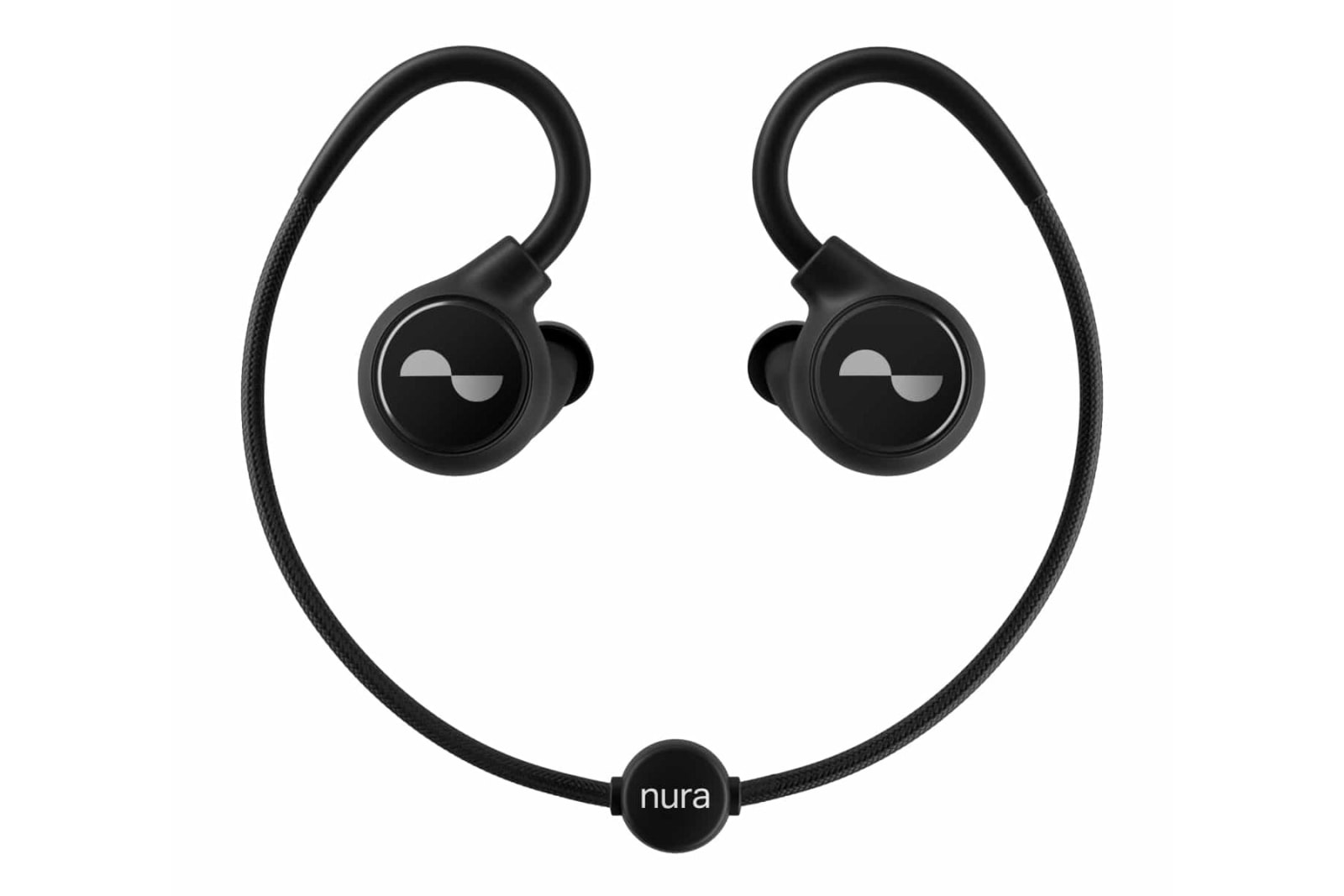 In practice, it's hard to tell exactly how well it matches the nuances of your personal hearing deficiencies. But from my own experience, the personalized audio does sound a lot better and more rounded than what comes through the headphones with customized audio switched off (you can toggle it in the app). With the Nuraphone, you have the benefit of double isolation, thanks to the over-ear design and inner buds. The NuraLoop doesn't have as much isolation, but I found the sound was still robust and impactful for buds of this size. My demo wasn't overly long, so I'd like to spend more time with them to form a more complete opinion, but right now it's looking good.

The dual connectivity (Bluetooth 5 or wired 3.5mm) certainly makes the NuraLoop more versatile than most buds. If you're heading out for a run or just want the freedom of wireless, you're covered. But for those times when a cable is preferred, that's an option too -- at the very least, they won't become useless once the battery runs out. The 3.5mm cable attaches magnetically but with a small cradle too, so it should be stable enough to endure a dynamic onstage performance.

Interacting with the NuraLoop is easy. Both buds have touch-sensitive surfaces on them, and you can tap or rotate your finger on them to control music, activate noise cancellation or call up pretty much any other feature. What gesture does what is configurable in the app, so you can set them up just as you like them. I did find that the NuraLoop's smaller size meant the rotating gesture was a little fiddly to get right, but I'm sure with a bit of practice, muscle memory will kick in.

It may have taken the company longer than planned to get the NuraLoop ready (it was meant to ship before the year rolled over), but if my short time with them is anything to go by, the wait might well be worthwhile.

All products recommended by Engadget are selected by our editorial team, independent of our parent company. Some of our stories include affiliate links. If you buy something through one of these links, we may earn an affiliate commission. All prices are correct at the time of publishing.
View All Comments
NuraLoop hands-on: Possibly the smartest earbuds around