Eargo has made a name for itself by doing things differently when it comes to hearing aids. Instead of the usual range of over-the-ear devices, all the company's products are "invisible" (completely in the canal, or CIC). That in itself isn't unusual, but the branding, packaging and user experience are all much more akin to consumer smart products than medical-grade devices. Last year's Neo buds were good, but this year's Neo HiFi promises to be even better (even if it doesn't stream music, as the name might suggest).

As with all hearing products, it'll depend on your personal needs as to whether the Neo HiFi is suitable for you. Eargo states that it's aimed at people with "mild-to-severe, high-frequency hearing loss." When I tried the original Neo last year, I found it to be helpful for my own hearing loss, if not quite as effective as a regular (over-the-ear) hearing aid from the likes of ReSound or Starkey. What I did like about the Neo, and therefore the Neo HiFi, is the whole user experience (more on this later).

What's new in the Neo HiFi? Mostly sound enhancements, it seems, which are not small things in a hearing aid, obviously. These improvements come in the form of increased bandwidth (it now amplifies a wider range of frequencies), better feedback cancellation and a new algorithm for wind reduction.

The feedback cancellation is good news. The original Neo was already pretty good at avoiding feedback, but it could still happen. Usually, it would manifest as a faint chirping noise rather than the screeching feedback of a town hall microphone (as with other hearing aids). But it was still enough that others nearby could hear it. I've been testing the Neo HiFi for about a day, and there's still some feedback, but mostly in my left ear, where a mastoid cavity from surgery is likely the cause.

As for the other audio enhancements, it definitely sounds more robust than before. I found the original Neo to be helpful but maybe a little on the synthetic side -- similar to the sound you might expect from a midrange TV's speakers (rather than a sound bar). As such, the original Neo felt like the sort of thing I'd wear when I need a little boost. The Neo HiFi is a bit more natural and thus something you're more likely to forget you're wearing -- which ultimately is the goal. 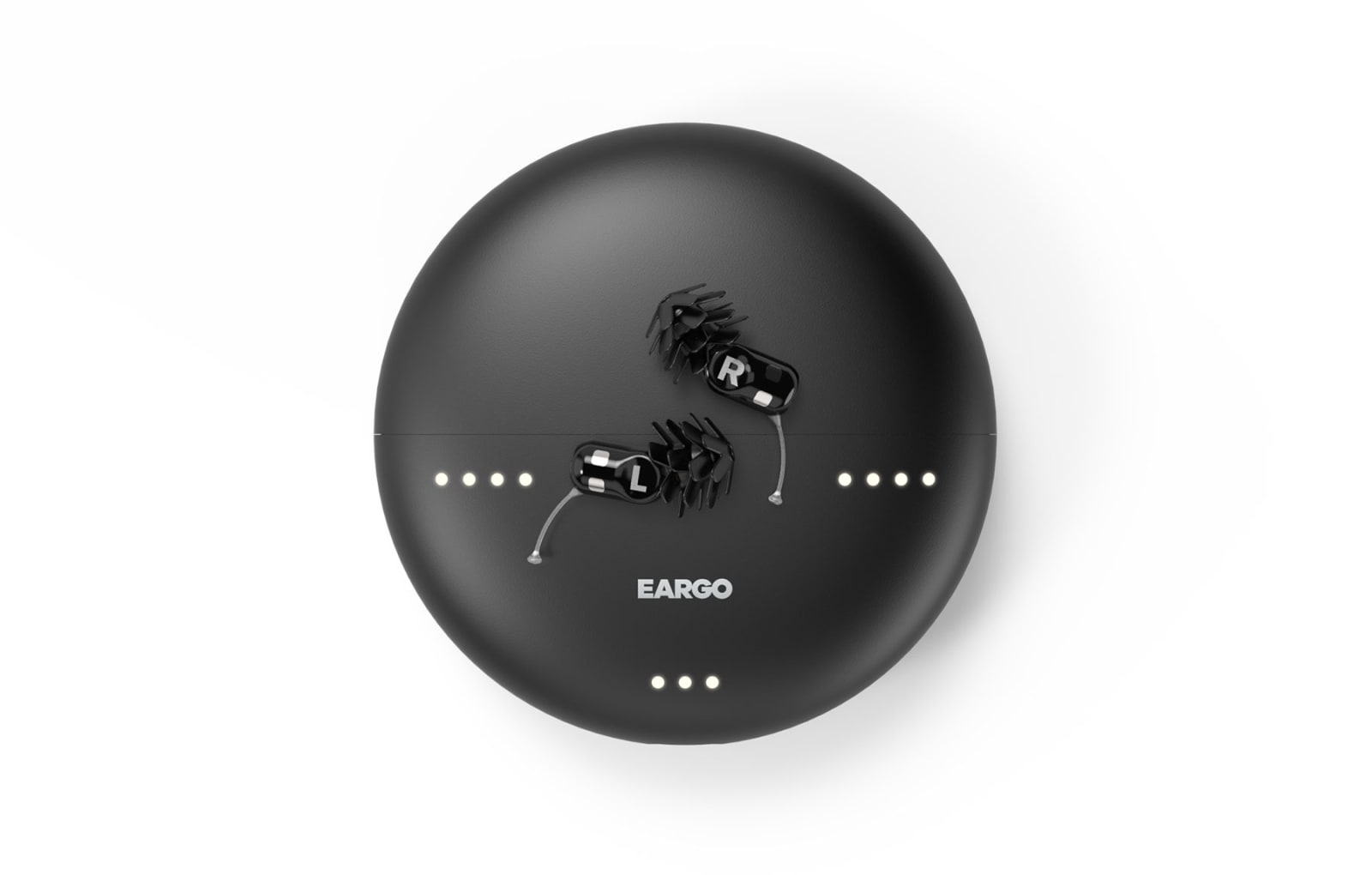 The companion app also offers more tools than before, with presets for different environments (restaurant, concert, et cetera) and EQ settings. You're also able to connect with a licensed hearing professional right from the app, which is becoming an increasingly common feature in this space (Starkey, Lively and more already offer something similar). The iOS app is available today, with an Android version to come later this month.

Most of the original Neo's features are present here, and that's a good thing. For one, the hearing aids still have a built-in battery, which I personally prefer. Most conventional hearing aids use zinc-air batteries, which have some benefits -- mostly the amount of power in a relatively small space. But they are also fickle and sometimes run out of juice even when not in use. This means you need to maintain a steady supply and be OK with replacing them often.

The Eargo recharges in a similar way to most true wireless earbuds (via a charging case), so you can top it up while it's safe in your bag or pocket. The case charges over USB-C, which is handy if that's the same connector your phone or laptop uses. The case is also how you'll connect to the hearing aids via the app (there's no Bluetooth on the buds themselves).

All this technology does come at a price though. At launch, the Neo HiFi will cost $2,650 per pair, and that price will go up to $2,950 after March 31st. While that might seem a lot, it's in line with most hearing aids, many of which don't have some of the more consumer-friendly features above, like the charging case or app controls.

The Neo HiFi is a definite improvement over the previous version, and I am always going to be a fan of a hearing product that is easy to use and doesn't feel like a medical product. It's estimated that nearly 40 million Americans have some form of hearing loss, and a common belief is that it can take those individuals up to seven years before they seek help. Eargo's direct-to-consumer model (you don't need to go to an audiologist) and slick presentation make seeking that help easier, and that can only be a good thing.