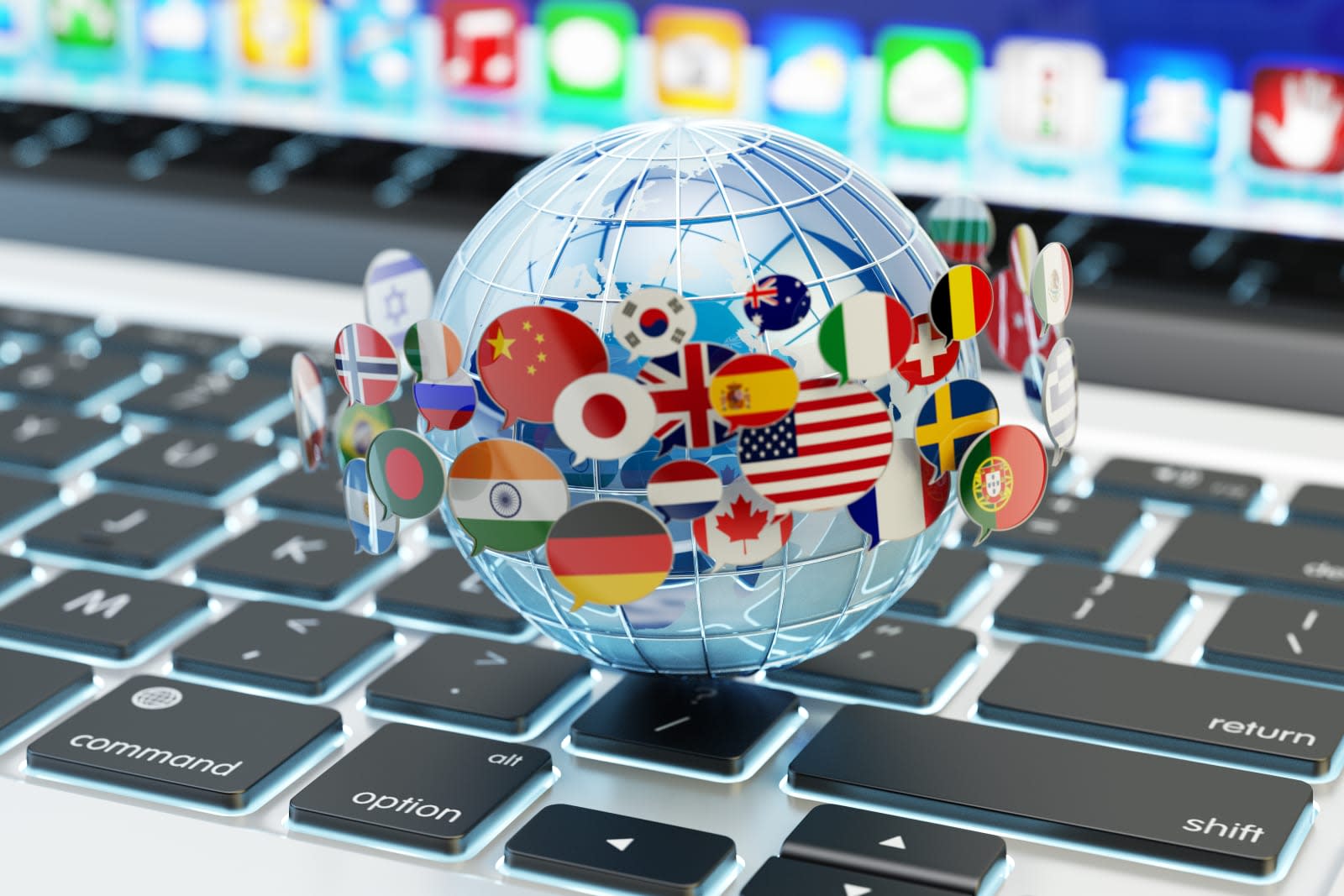 Hundreds of thousands of attendees from every corner of the globe descended upon Las Vegas last week to see the latest and greatest in consumer technology trends. However, with so many people from so many places in a single space, language barriers can be an issue. Thankfully myriad companies were onsite with their own tech-based solutions to address these communication breakdowns. We were able to check out a few and see which are best placed to become the babel fish we were promised.

Brooklyn-based Waverly Labs has been making translation earpieces since its founding in 2014. The company released its first device, the Pilot, in 2016 and followed that up this past November with the Ambassador -- an over-ear device designed for travelers. The Ambassador detects and automatically translates any spoken word it hears within 8 feet. Well, technically, it listens to the words, transcribes them to text in its associated iOS or Android smartphone app (yes you'll need an LTE or WiFi connection, what did you think the process ran on pixie dust and unicorn farts?), translates that and then repeats the translation back into your ear. It can interpret 20 languages and 42 individual dialects.

Two people can each don an Ambassador and carry on a near real-time conversation, or up to four Ambassadors can be wirelessly tethered to a single smartphone, allowing groups to easily converse, regardless of their native tongues. The devices can also be connected to a speaker system, enabling the user to address and take questions from an audience -- a super helpful feature when conducting a lecture or business presentation. You can expect around six hours of operation per charge when the $200 Ambassador ships in March 2020.

We also took a look (and a listen) to the newest two-way translation device from Pocketalk. The palm-sized device is already a hit in Japan and will arrive in the US soon. Its latest iteration is smaller and lighter than its predecessor but sports a larger screen for easier reading as well as a back-mounted camera. That camera comes in handy when attempting to decipher text, whether that's a street sign or restaurant menu.

The latest Pocketalk can also quickly convert currency, length, width and temperature. Inside are a number of translation engines so it can understand 74 different languages (55 languages for a two-way conversation, 17 languages for bilateral text-to-speech and another 37 languages for unilateral text-to-speech, again using a network connection. And, thanks to a pre-installed SIM, it operates in 130 countries around the world. The device comes with a two-year LTE data plan and can connect to WiFi as well, should the need arise.

I got a chance to play around with the Pocketalk and it's a slick little gadget at about half the size of my Pixel 2. Only a few taps on the large, well-lit screen are needed to set up the device -- whether you're translating Farsi to English or Argentinian Spanish to Cantonese -- and once that's done, it can be activated with a single touch.

It only took a second or two for the Pocketalk to work its interpretive magic, both for spoken and written words. You'll get around 4.5 hours of operation on a 105 minute charge. I wouldn't want to try watching a foreign language film with it, but for normal conversations, the Pocketalk is capable of facilitating the interaction. At $300, it's a bit pricier than the Ambassador, but it also doesn't require you strap a gadget to the side of your head.

The Ila Pro from TranslateLive, on the other hand, is a lot like the Pocketalk but much larger and way more expensive. The device can handle 120 spoken languages and dialects. It's design comprises a pair of touch screens connected at the top by a hinge. Each person in the conversation selects their preferred language and then just starts talking. The Ila translates in real time and displays the output on each screen like a text message conversation. This provides both people access to the transcript to ensure accuracy. The Ila can also access existing free TRS services from the FSS and connect via Bluetooth with braille displays and hearing aids, so even if you're hard of hearing or have reduced visual acuity, the Ila can help you out. And if you do somehow manage to stump the translation software, the Ila can call in a live interpreter to assist. But all those features come at a steep price, that being $1000 for the unit itself plus an annual $120 subscription fee.

Communication involves more than simply being understood, listening is an equally crucial component. Luckily, that's what the Langogo Minutes excels at. This handheld device doesn't just translate conversations in over 100 languages with a claimed 80 percent accuracy rate, it also records up to seven hours of audio and delivers written transcripts of what it hears.

The $90 device isn't available just yet, as Langogo plans to launch an Indiegogo campaign in September and hopes to begin shipping by the end of the year. It'll work worldwide once it does hit the market, using its built-in Cloud-Sim card. That will give users access to both 3G and 4G mobile networks in 72 countries as well as WiFi. Users can also replace that SIM card with one of their own if they prefer.

Don't let the knock-off AirPods look fool you, the Timekettle WT2 is a capable multi-language translator. The buds are designed to be shared; one for you and one for your interlocutor, and the magnetic case cleverly splits apart as if you were sharing a massive high-tech aspirin with your companion. The WT2 "only" offers translation for 40 languages, but also claims support for 88 accents. Though it's unclear what that means, as we can think of more accents than that in one state alone, let alone the other 39 dialects on offer.

The WT2 offers three main modes depending on your situation or environment. The most fun is "Simul" mode, in which both parties wear a bud and speak freely. The conversation is then translated in near real-time with a transcript appearing (in both languages) on the companion app as a backup. "Touch" mode is more helpful for noise environments, as the buds only listen for speech while you rest your finger against them, and "speaker" mode is helpful if you only have one bud, or (fairly) your companion doesn't fancy putting one in their ear.

In practise, the WT2 works well. We tested by holding a conversation with a native Spanish speaker, and despite some background noise it managed a solid translation without much delay -- certainly enough to keep things feeling (relatively) natural. Like many others on this list, you will need a data connection for the translation to work, but the app is easy enough to use, pairing the buds was a cinch and, unlike others listed here, you can buy the WT2 right now -- que bien.

Interacting with another adult is one thing. Attempting to discern the intentions of a wailing infant is an entirely different kettle of fish -- but that's exactly what the CryAnalyzer Auto attempts to do. Developed in conjunction with Japan's NCCHD (National Center for Child Health and Development), the CryAnalyzer team leveraged data from 500,000 new parents to train their AI. The two-part translation system utilizes a dedicated microphone -- roughly double the size of a MacBook power brick -- that sits in the crib next to your baby's pillow and an associated smartphone app.

When your 0-to-6 month-old baby starts fussing, the microphone picks up its cries and the app's AI system determines whether the kid is hungry, angry, sleepy, uncomfortable or bored. The developer claims that it can accurately guess what your ankle biter is feeling more than 80 percent of the time. Like the Langogo Minutes, CryAnalyzer has yet to hit the market. It should arrive in Japan come this August before spreading to the US and Australia after that. It will cost either $300 to buy outright or can be used on a subscription basis for between $10 and $20 a month.

Babies aren't the only non-verbal actors whose emotions are being interpreted at CES this year. Japan's Inupathy debuted a vest that can help dog owners understand what their pups are thinking about (besides squirrels and belly rubs). The system consists of a harness, a heart rate monitor and, of course, a smartphone app.

The premise is simple: when dogs get excited, their heart rates spike. By monitoring,analyzing and interpreting this data, Inupathy claims to estimate your dog's current emotional state. That information is then displayed via a LED screen on the top of the harness. If the display flashes red, the dog is stressed; if it's green the dog is relaxed. A rainbow pattern is ideal as it indicates your dog is happy and actively engaged rather than bored and looking for one of your shoes to chew on. The device's developer hopes to launch a crowdfunding campaign in the coming months and bring it to the US shortly thereafter. Of course, it has also been pointed out that dogs do already come with an emotional signalling device preinstalled: it's called their tail.

In this article: gadgetry, gadgets, timekettle, TranslateLive, CryAnalyzer Auto, Inupathy, Langogo Minutes, Waverly Labs, Ambassador, Langogo, WT2, Timekettle WT2, translator, translation, news, gear
All products recommended by Engadget are selected by our editorial team, independent of our parent company. Some of our stories include affiliate links. If you buy something through one of these links, we may earn an affiliate commission.