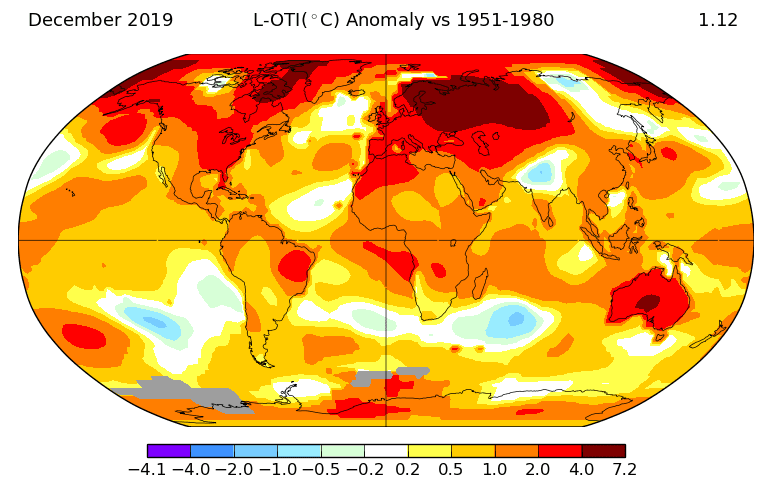 If the melting ice caps and recent wildfires didn't tip you off, NASA, the National Oceanic and Atmospheric Administration (NOAA), and the World Meteorological Organization (WMO) have hard data showing that the effects of climate change are only getting worse. According to the agencies, 2019 was the second hottest year since record keeping began in 1880, and was only topped by 2016's temperatures. The trend is clear: Every decade since the '60s has, on average, been warmer than the one before it. Even more alarming is the fact that the past five years have been the hottest five on record.

2019 was 1.8 degrees Fahrenheit (0.98 degrees Celsius) warmer than the 1951 to 1980 mean, according to NASA's Goddard Institute for Space Studies (GISS). To collect the data, NASA took exhaustive readings from over 20,000 weather stations, sea surface buoys and ships and Antarctic research stations. The full dataset is available on the agency's website. Statistical analysis of the data shows that this warming is mainly caused by increased carbon dioxide emissions -- as well as other greenhouse gases -- produced by human activities like manufacturing, farming, and livestock keeping.

While the Earth is getting warmer on average, the effect isn't evenly distributed throughout the planet. 2019 was only the 34th warmest year on record for the contiguous United States, for example. Meanwhile, the Arctic region has warmed at three times the rate of the rest of the planet.

"Rising temperatures in the atmosphere and ocean are contributing to the continued mass loss from Greenland and Antarctica and to increases in some extreme events, such as heat waves, wildfires, intense precipitation," says NASA. The NAOO recently found that 2019 wasn't just the second-hottest year on record -- it was also the second-wettest, thanks to historic flooding and extreme hurricanes. As the signs of climate change become more explicit and immediate, its danger has become harder and harder to deny. Hopefully these effects -- and the hard data supplied by NASA and the NOAA -- prompt more drastic and proactive action on the part of governments and corporations.

Source: NASA, NOAA, WMO
In this article: climate change, giss, global warming, goddard, goddard institute, green, nasa, National Oceanic and Atmospheric Administration, noaa, tomorrow, weather, WMO, World Meteorological Organization
All products recommended by Engadget are selected by our editorial team, independent of our parent company. Some of our stories include affiliate links. If you buy something through one of these links, we may earn an affiliate commission.