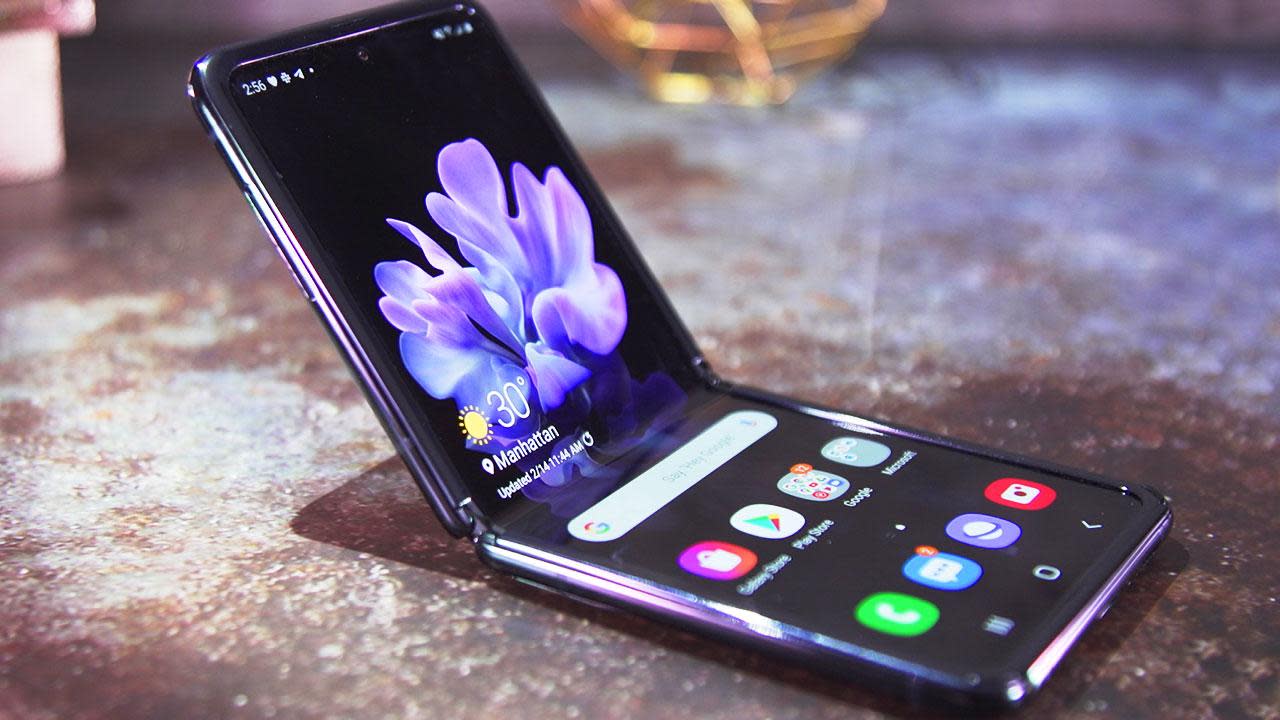 I'll admit it, when Samsung teased the Galaxy Fold at its Developer Conference in 2018, I wasn't sold on the concept. Sure, the technology was impressive, but it just seemed gimmicky to me. The only benefit I could think of for folding displays would be if they made regular-sized phones smaller.

Cut to 2019, and the Galaxy Fold fiasco proved I was right to be reticent. The first-gen foldable was easily damaged and, frankly, the concept of a phone that opened to become a tablet didn't appeal to me. Then Motorola unveiled the Razr, bringing some hope, but that soon turned sour when I heard all the complaints about its shoddy quality and overall impracticality.

On Tuesday, however, Samsung shook things up. It officially revealed the Galaxy Z Flip -- a 6.7-inch phone that, like the Razr, folded in half. But Samsung managed to come up with an "Ultra-Thin Glass" that made its folding screen sturdier than alternatives we've seen. In doing so, the company instilled more confidence in the durability of its product. More importantly, it proves that the ultimate goal of gadgets that fold to become more compact is within reach.

The Z Flip is the first iteration of a folding smartphone that actually makes sense. The phone arrived in stores on Valentine's day, and after testing out a sample for 24 hours, I've already caught feelings. While we work on our full review, here are some early thoughts. 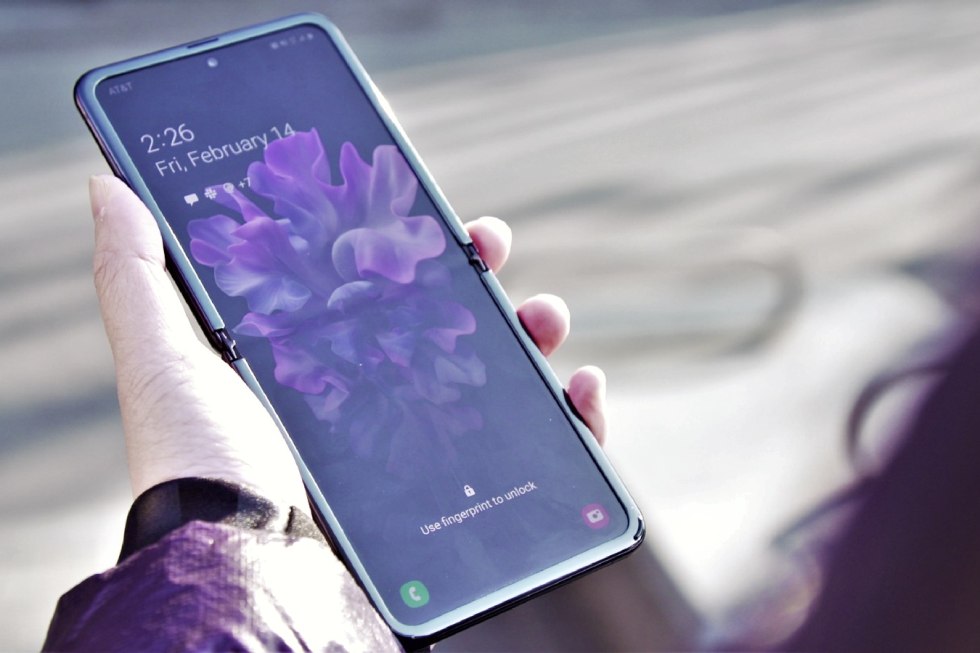 Even after just a relatively short time with the Z Flip, when I use my Pixel, it feels weird that I can't fold it shut. I even find myself trying to bend my Pixel, my fingers itching to fold the Z Flip like they're searching for a phantom fidget spinner.

Folding screens tend to be more damage-prone, but Samsung's "Ultra-Thin Glass" here feels like a massive improvement over the Motorola Razr and the Galaxy Fold. It's more rigid and it held up even as I repeatedly pushed into it with my thumb for leverage to close the phone with one hand.

Shutting the Z Flip before tucking it away in my coat pocket also made me feel like it's more protected. My fingers sometimes activate my Pixel's lock screen when I stick them in my pockets for warmth, so I end up accidentally skipping a track on Spotify or inputting inexplicably long PINs. It's not a big deal when this happens, but it's nice to know that when I put the Flip away, it won't randomly get triggered. There's something oddly satisfying about the act of physically shutting your phone before putting it away, too, that makes you feel more present. 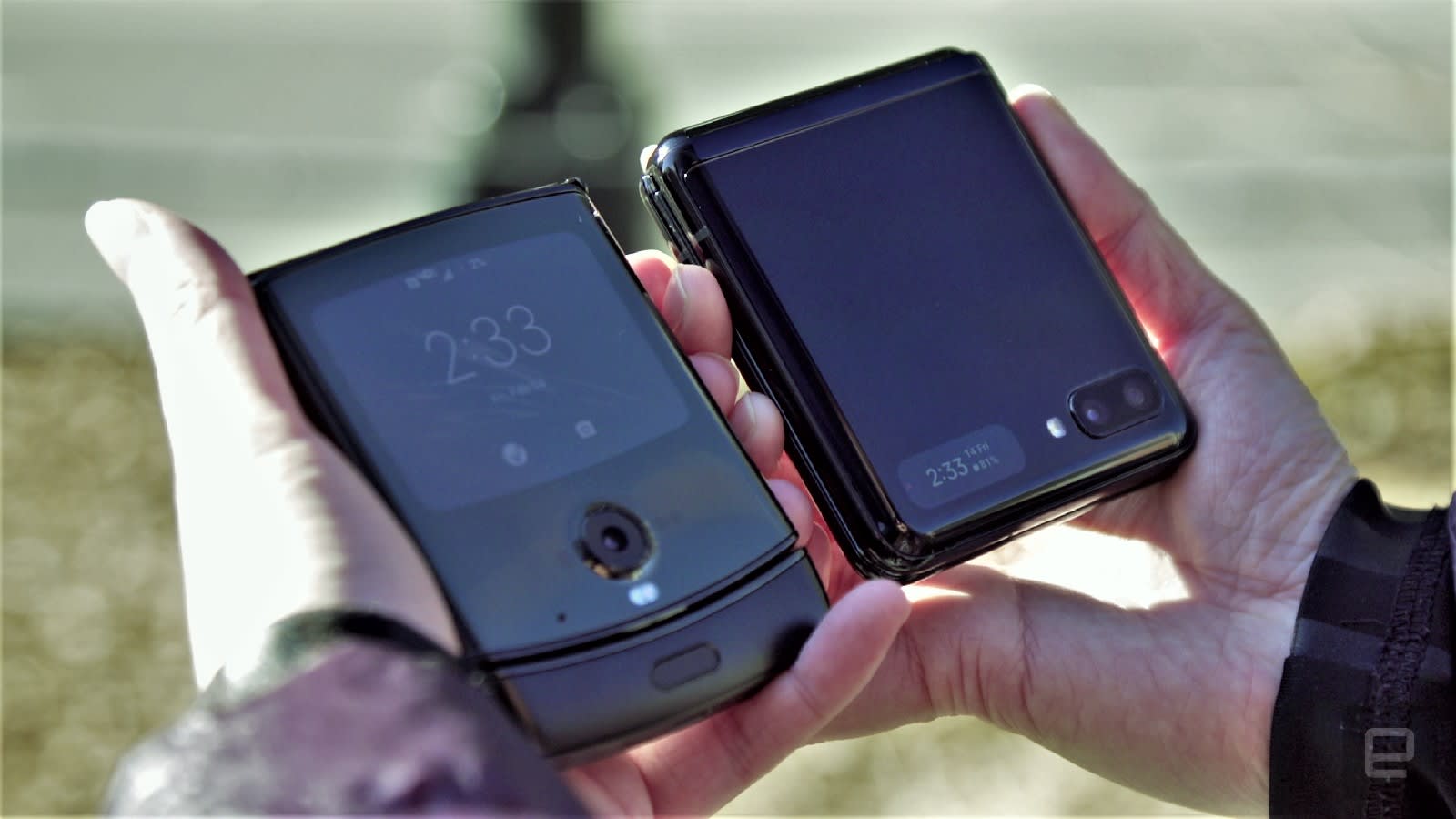 Of course, when you get a message, you need to take the extra step of unfolding the device before you can reply. Depending on how adept you've become at opening the Flip with one hand, this could be a quick, simple task or a longer two-handed affair. But so far I've found the Flip well-built enough that I can flick it open with some force, which speeds up the process, and not worry about breaking the hinge. I became somewhat of an expert at opening the Flip with one hand within about two hours.

Another thing I adore is the hinge. Samsung describes this as a "freestop folding system," which is marketing speak for the way the phone can be folded to rest open at any angle. Unlike the Razr, which is only usable completely open or closed, the Z Flip's hinge offers the same amount of resistance from zero to 180 degrees. This makes it impossible to simply snap the phone shut at the end of an infuriating phone call, for example. You'll have to close the device quite deliberately -- don't expect it to be as easy to shut as the original Razrs. This isn't a big deal, though. I'd rather have a reliable hinge than the petty satisfaction of dramatically hanging up on someone.

But the sturdy hinge does make it easy to position the Z Flip like a tiny laptop and adjust the top half of the screen to whatever viewing angle you want. Once you fold the Flip to about 120 degrees or smaller, "Flex Mode" kicks in, splitting the interface in half for more-intuitive use. In the Gallery app, for example, Flex Mode places the photos in the top section and turns the bottom panel into a trackpad-like area so you can swipe horizontally on it to scroll through your pictures. Flex Mode only works with Gallery, Camera, Always On Display and Duo for now, but Samsung says it has an SDK for developers and that it will work with Google to make this more compatible with Android overall. 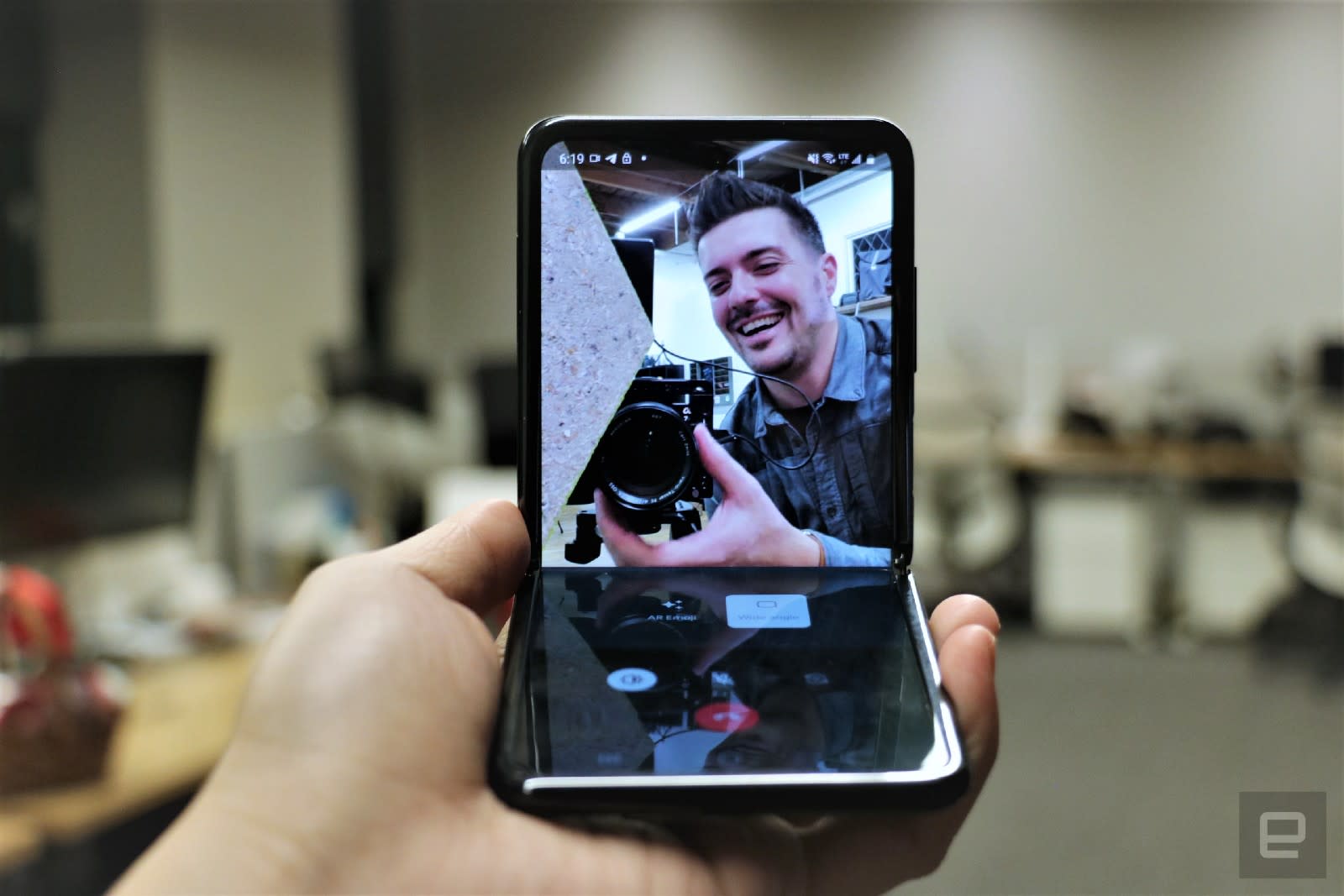 My absolute favorite thing about the hinge is the ability to set the Z Flip up on any surface with the selfie camera facing you, perfect for making hands-free video calls. As someone who has to call home with Chinese New Year greetings annually, being able to easily set my phone down while I wave two oranges around in front of the camera is a godsend. I had to prop my Pixel 3 up against the armrest of my couch to wish my parents well, and every so often an incoming alert caused the device to crash to the ground. The self-supporting setup that the Z Flip offers is surprisingly clever.

Maybe it's because of the glass, but the crease running across the Z Flip's screen is a lot less noticeable than on other foldable displays. It's barely there when you're using the phone face-on, and you'll really only see it at an angle. Also, when I'm running my thumb up and down the 21.9:9 panel and I feel the slight bump under my finger, it feels oddly satisfying. The screen stays in place and doesn't move, unlike the foldable Razr's screen, which actually shifts up and down as you open and close it. The Razr's plastic-OLED panel looks like a roll of scotch tape that someone peeled back and then tried to re-stick in place but left a gap behind. Plus, the Motorola foldable makes an unsettling creak each time you close it; the Z Flip is delightfully silent.

As you can tell, I was blown away by the build of the Z Flip's hinge and Dynamic AMOLED display which, by the way, was easy to see in sunlight. But a few other features give me pause.

My biggest complaint is the utility (or lack thereof) of the 1.1-inch screen on the outside of the phone. Most of the time, this just shows you the time, date and battery percentage. Swipe right and you'll see up to three notification icons with a "+2" or however many more alerts are queued. Swipe left and you get music controls -- neat. When a message comes in, a preview pops up and scrolls so you can read the whole thing (if you're patient enough to sit through it all). But obviously you can't reply to anything without opening the phone. If you're taking a selfie or photo with the Z Flip closed, you can also use this sliver of a screen as a very limited viewfinder.

It's a small gripe, since this display isn't meant to do much more than serve up bits of information, and it doesn't take much effort to open the phone to really get to work. But if Samsung was going to go to the length of placing a screen here, it might as well have used a bigger, more functional option. The rest of the phone's shiny, easily-smudged case feels like an expanse of wasted space in comparison to the Razr's. Motorola opted for a 2.7-inch touch-sensitive panel that you can swipe on to see more of your alerts, and that alone is its sole advantage over the Galaxy Z Flip. 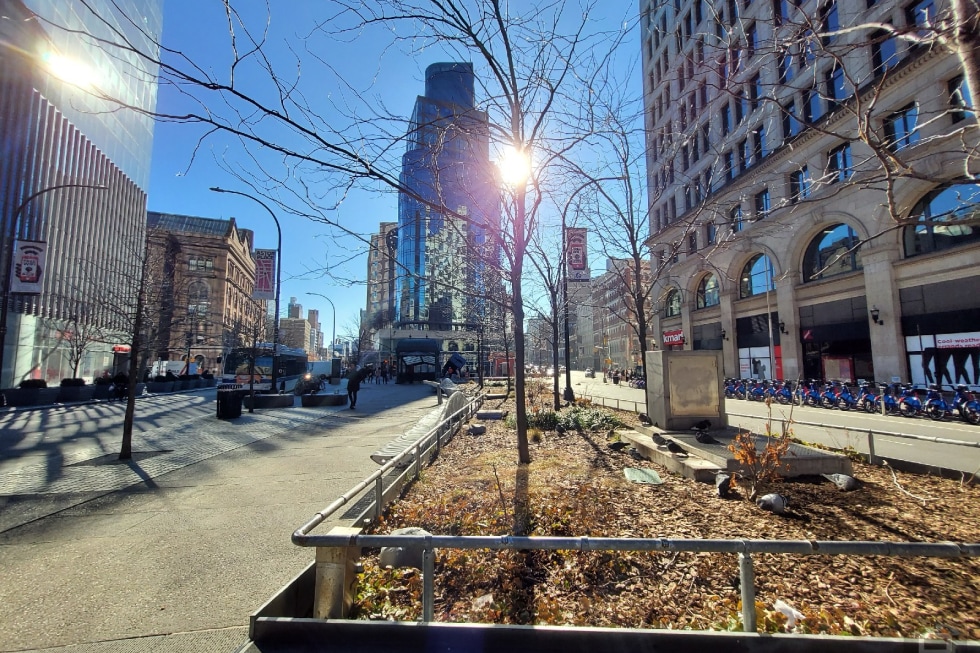 There are plenty of reasons to prefer Samsung's foldable, including the dual-camera setup on the Flip's rear. The pair of 12-megapixel sensors offer a regular 78-degree field of view as well as a 123-degree wide-angle. I liked the versatility this offered, and the cityscapes I shot came out nicely. The images themselves are pretty standard for a Samsung device -- they're colorful and crisp, but lack the oomph that you'll find on Pixels or the latest iPhones. Still, even garden-variety Samsung cameras are better than the solo sensor on the Razr's rear.

Right now, I haven't had the phone long enough to fully test the battery life. At 2:30am, about 13 hours after a full charge, I was left with 31 percent of juice. Most of the time, I was messaging friends on Telegram, adding to my Instagram stories and obsessively scrolling through my feed. I also tweeted, video-chatted with some friends and Slacked or emailed my colleagues. I even played a quick round of NBA Live. In general the Z Flip's Snapdragon 855 processor smoothly performed all these tasks, but a full review is underway to properly test its capability.

We'll also need more time to see just how durable the Z Flip is. So far, I've accidentally dropped my unit on the floor from a table at a restaurant and scuffed up a corner. You'll have to be careful when using the device -- it's not rated for water- or dust-resistance at all.

So far, my biggest takeaway is that I don't want to give the Flip back to Samsung. I have quickly grown used to a regular-sized phone that I can fold in half and tuck away in a pocket. In general, I'd like better cameras and maybe a slightly sleeker design and more useful external screen. But as the first iteration of a device that folds this way, the Z Flip makes an extremely convincing case: This format has a ton of potential.

As Samsung continues to refine and improve on the Z Flip, I'm sure future generations will only get better. Sadly, the phone is out of stock across almost all of the US, as Samsung seems to only have shipped limited quantities to stores. That's probably for the best -- it'll give you time to read our full review before deciding whether you should buy one. That is, if you're lucky enough to get your hands on one and don't mind splashing $1,380 to be an early adopter.

In this article: dropcap, foldable, gadgetry, gadgets, galaxy z flip, gear, google, mobile, nodropcap, samsung, samsung galaxy z flip, smartphone
All products recommended by Engadget are selected by our editorial team, independent of our parent company. Some of our stories include affiliate links. If you buy something through one of these links, we may earn an affiliate commission.