It's neither special nor a cinematic train wreck.
N. Summers|02.18.20
@nisummers

Sonic fans are used to being let down. Unlike Mario, who has rarely starred in a bad video game, the famous 'blue blur' has featured in countless duds. These include Sonic the Hedgehog 4, a disappointing follow-up to Sega's Genesis classics, and Sonic the Hedgehog, a 2006 reboot that was full of bugs and featured a now-infamous kiss scene between the hyperactive hero and a human princess.

Expectations for the Sonic movie were, therefore, low.

The film's distributor, Paramount Pictures, had already been criticized for releasing a trailer with a horrifically unfaithful and human-like version of Sonic. The backlash was so severe that the studio was forced to delay the movie's release, redesign the character and remake every shot he featured in. A second trailer revealed a more recognizable and authentic Sonic, which earned some respect and appreciation from the Sega faithful. Still, many were understandably skeptical.

Shockingly, though, the Sonic movie is okay. Amusing, even. The 99-minute feature rarely feels original, ambitious or narratively interesting, but it's also not the cinematic train wreck that so many were expecting. The bar was exceptionally low, but this simple live-action comedy might be the best video game to movie adaptation ever made.

First, let's talk about that redesign. Paramount recruited Tyson Hesse, the artist behind the gorgeous Sonic Mania opening and Sonic Mania Adventures series, to steer the much-needed overhaul. Clearly, he was a great choice: the final version is undeniably better than the original, with larger and more expressive eyes, a slightly pudgier nose, and warmer fur on both his face and circular stomach. The proportions are better, the gloves are back and the terrifying teeth are gone. The filmmakers even ditched the cringeworthy Puma kicks for a pair of classic Sonic sneakers.

The gloves are back and the terrifying teeth are gone.

The design isn't perfect, though. Sonic's arms are still blue, for instance, rather than the fleshy color found on his abdomen. The eyes, while dramatically larger, don't connect in the middle and his entire body is a little too furry for my tastes. Like Detective Pikachu, the number of visible fibers is technically impressive and adds to the overall realism. Sonic isn't a realistic character, though, and I would have preferred a slightly cleaner and glossier look similar to his classic video game appearances. 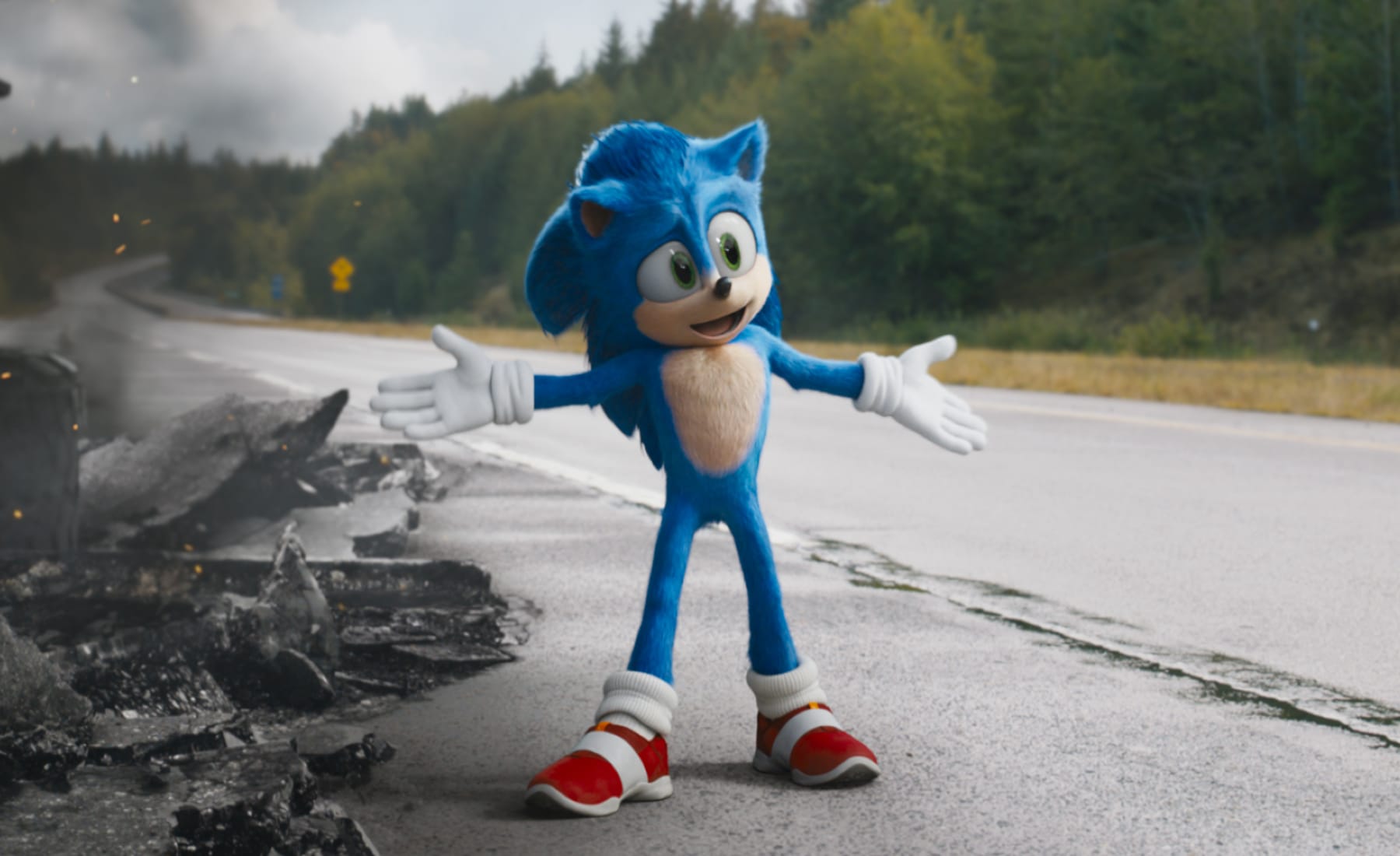 Yes, Sonic uses his iconic Spin Dash in the movie.

The recognizable hedgehog slots nicely into the film's predictable storyline. A brief prologue explains that Sonic grew up on another planet (Mobius is never mentioned, unfortunately) complete with loop-de-loops and everything else a superfast hedgehog could wish for. Some masked foes want his powers, though, and a paternal owl called Longclaw persuades Sonic to travel off-world using a bag of teleportation rings.

As far as I'm aware, Longclaw is a brand-new character created for the movie. And, outside of bonus stages and obscure comics, rings have never been used as portals before.

As soon as the blue blur lands on Earth, however, the movie follows a narrative arc that you've probably seen a dozen, maybe one hundred times before. It goes a little something like this: a misunderstood alien lands on Earth. The audience knows he's adorable and doesn't pose a threat! The government thinks the alien could be dangerous, though, or hide the answer to infinite energy, so they send a deadly task force to capture it. Thankfully, the alien befriends a human who can help it navigate Earth's strange societal customs. Together they save the day, becoming best friends and forcing the government to abandon its chase. 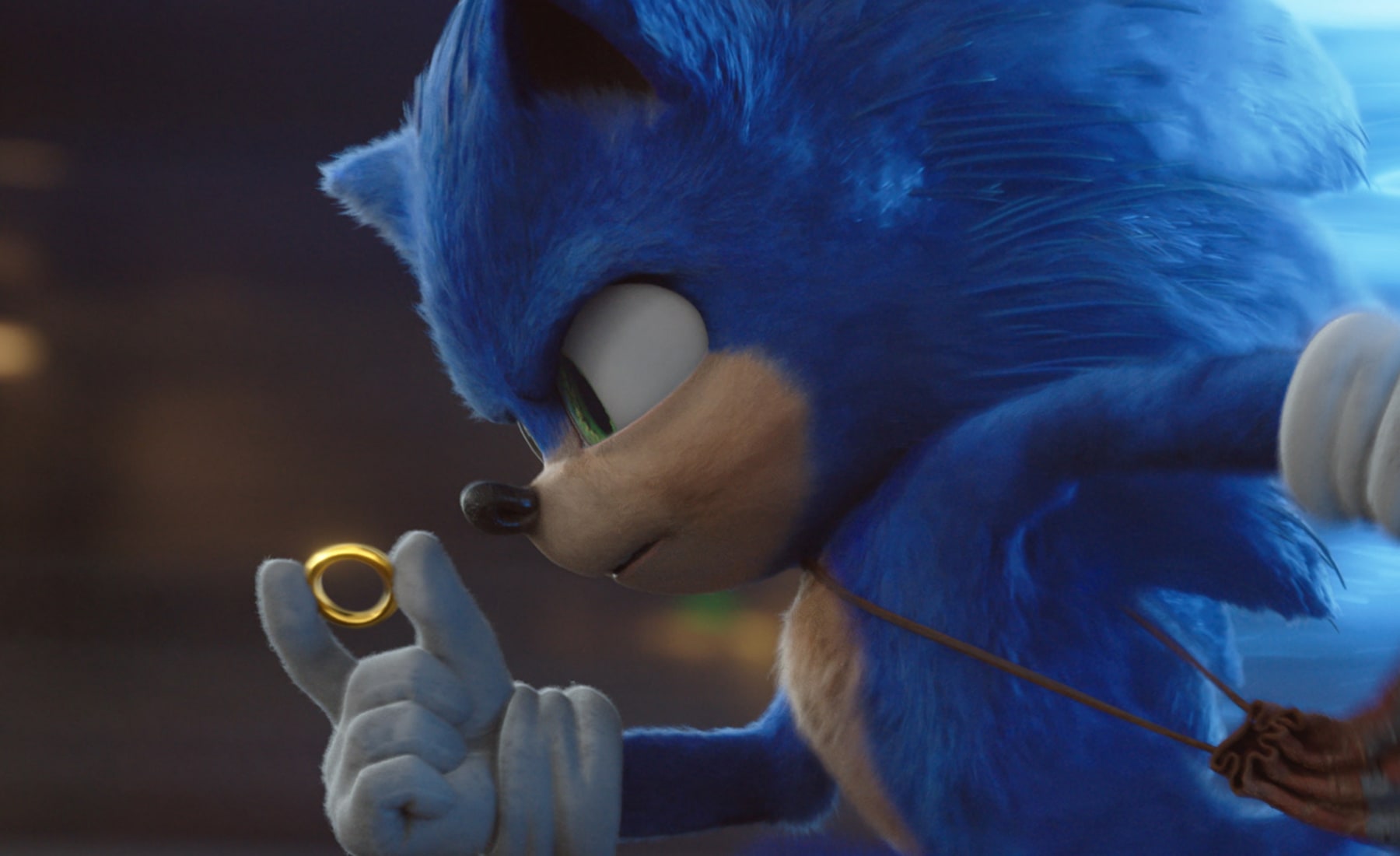 The movie uses Sonic's agility and care-free personality, at least, to put a fresh spin on these events. At the start of the movie, for instance, the hedgehog is a lonely but upbeat soul living secretly on the outskirts of Green Hills, Montana. He passes the time by speed-reading comics, running in a washing machine and playing table tennis against himself. Later, he stops off in a road-side bar with Tom Wachowski -- a warm-hearted police officer played by James Marsden-- to play darts and an arcade basketball game at breakneck speed. They later start a bar brawl which Sonic defuses in a slow-motion sequence clearly inspired by Quicksilver in X-Men: Days of Future Past and Apocalypse.

Hollywood star Jim Carrey, meanwhile, embodies Dr. Robotnik with his trademark blend of physical comedy and over exaggeration. Other than his love for machines, there's little here that differentiates the character from Ace Ventura and some of Carrey's other on-screen performances. But that's fine, because Dr. Robotnik has never had a particularly deep or original personality. (Some comics have experimented with a more tragic backstory, however.) And it just so happens that Carrey's slapstick style is a good match for the mad scientist. Most importantly, you can buy into his fascination and dogged pursuit of Sonic throughout the movie.

Sonic farts in the movie and, on two separate occasions, does the once-viral floss dance.

Both leads are charming but rarely funny. You probably knew this after watching both trailers, which contain the vast majority of the movie's less jokes. Sonic also farts in the movie and, on two separate occasions, does the once-viral floss dance. In my theater, nobody cheered or giggled during these moments. 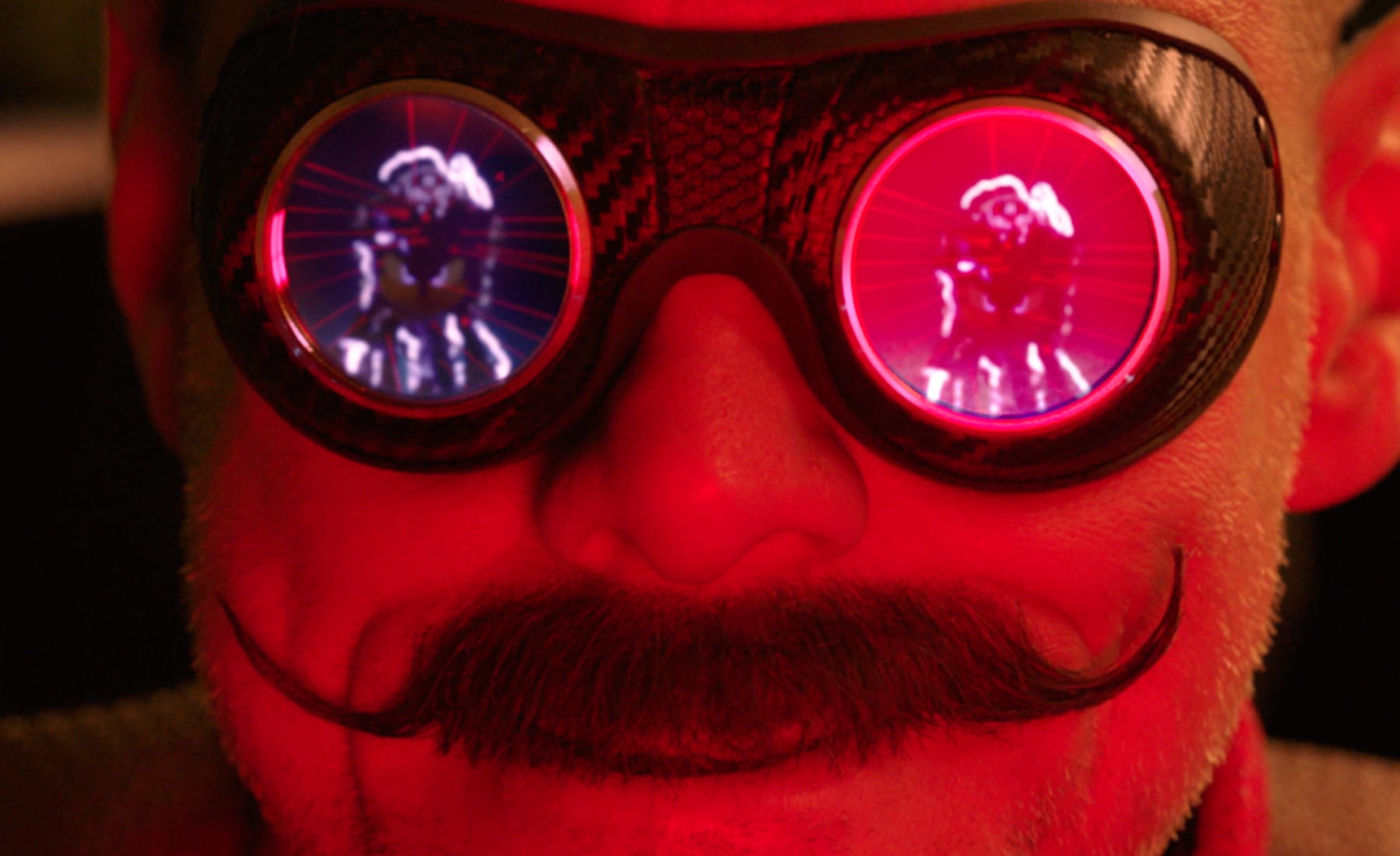 Dr. Robotnik is a shallow but memorable villain.

The two-dimensional storytelling is harder to judge. Yes, the film follows an arguably tired story structure. But the characters are likeable and act logically with clear intentions and motivations. There are no major plot holes and, prologue aside, you're never forced to sit through piles of exposition. The film moves at a brisk pace, too, and doesn't try to set up an overly complicated cinematic universe. Diehard Sonic fans might be disappointed, but this movie isn't meant for them -- it's designed for a younger crowd but that's probably never held a Genesis or Dreamcast pad.

I'm a lapsed Sonic fan, but I actually preferred this tried-and-tested approach to Detective Pikachu, which had a strangely messy and convoluted third act. What was the deal with Mewtwo again? And how was the god-like Pokémon connected to the hero's father? I've already forgotten most of the details and, to be honest, have little interest in recalling them. If and when I watch the movie again, it'll be for Ryan Reynolds' brilliant vocal performance, rather than the kid-friendly noir mystery.

The Sonic movie, meanwhile, feels like a wasted opportunity. Yes, we get to see the blue blur running and fighting at phenomenal speed. And the film is packed with Easter eggs related to classic Sonic stages, the notorious 'Sanic' meme and even the character's love of chilli dogs. On a narrative level, though, the movie would have worked just fine with any alien that had special powers. That's a shame, because there's a number of weird and sometimes wonderful Sonic stories -- told through comic books, animated shows and games -- that the writers could have mined for inspiration. 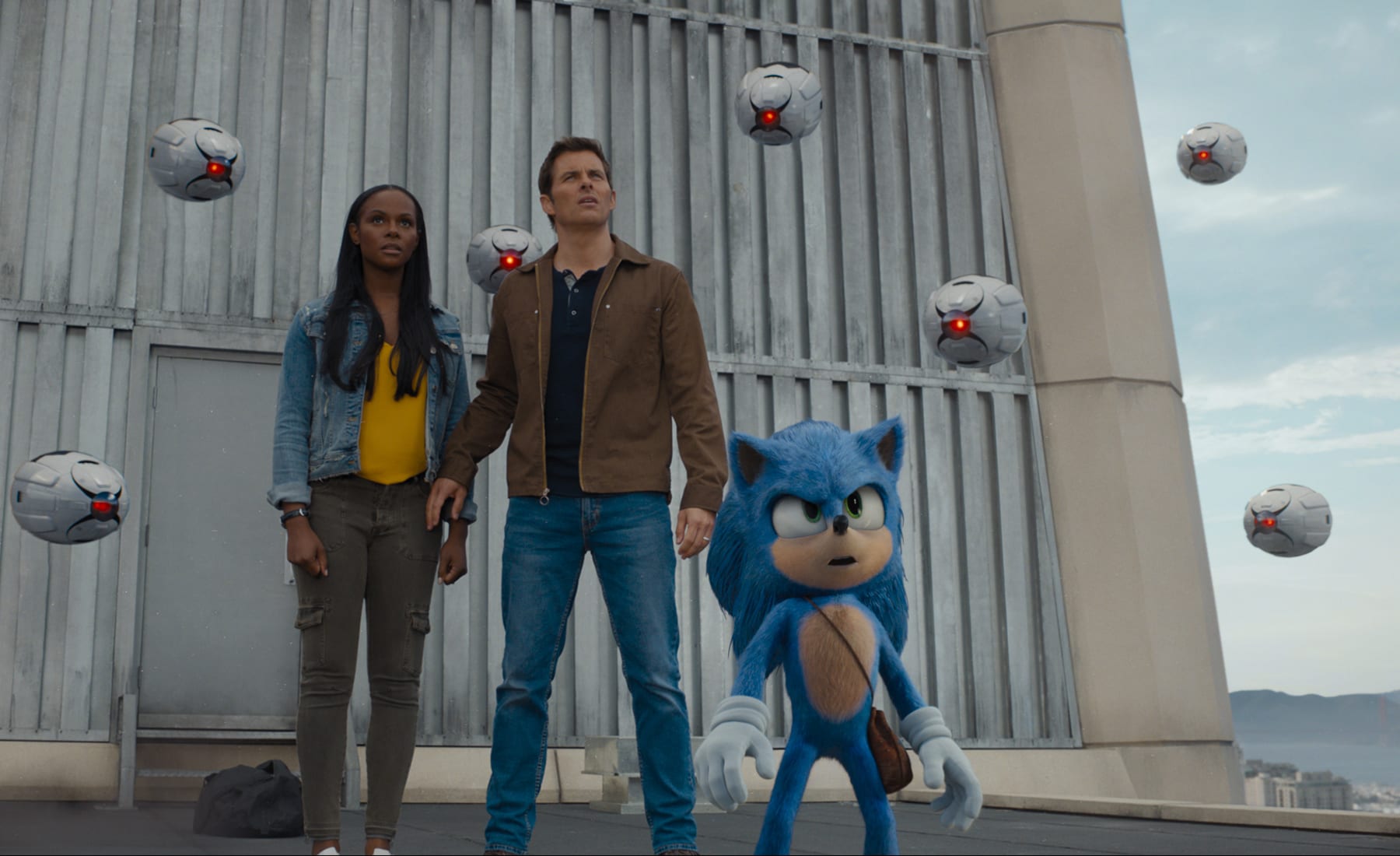 Sonic befriends a kind suburban couple throughout the movie.

Heck, even the two-part Sonic OVA was more interesting. The 1996 feature took place on Planet Freedom, for instance, a post-apocalyptic world split into two layers, the Land of the Sky and the Land of Darkness. (A structure similar to the Empire State Building is shown in the Land of Darkness, suggesting the planet is actually Earth.) In my opinion, Metal Sonic's death sequence was more emotional than any scene in the new Sonic movie.

I'm sure Paramount Pictures doesn't care, though. The new film pulled in $57 million during its three-day opening in the US, trumping Detective Pikachu's already impressive $54.3 million. Globally, the action-comedy has made $111 million so far, which is well above its reported $85 million budget. These numbers are remarkable considering the almost-universal hostility towards the first trailer last year. Paramount Pictures and everyone else involved in the movie, including Tyson Hesse and Original Film, have salvaged an otherwise guaranteed box office flop. (If only Universal Pictures had take a similar route with Cats last year.)

For older Sonic fans that have suffered the character's worst video game outings, the film will be a relief.

Sonic the Hedgehog isn't a complicated or particularly creative movie. It's an unashamedly functional one that gives the hero ample opportunity to crush robots, make silly jokes and do everything else you've seen before in video game form. For children that can't remember blowing on Genesis cartridges, that'll be enough. And for older Sonic fans that have suffered the character's worst video game outings, the film will be a relief.