Microsoft's all-in-one Office app is ready for primetime. The mobile-first application, which the company announced last November, has already been available as a public preview. That version was limited to Android users that signed up through a specific Google Group and 10,000 iOS testers that registered via Apple's TestFlight program, however. The consumer-ready Android app slipped into the Play Store earlier this week -- a littler earlier than planned, a Microsoft spokesperson told Engadget -- and now the iPhone version is officially out of beta. For now, the Android app has "limited" tablet support, and there's no iPad-specific version.

As the name implies, the Office app combines Microsoft Word, Excel and PowerPoint. The software is more than a glorified app folder, though. There's a home screen, for instance, that lists every file you've recently created, edited or accessed across the three apps. It's a simple but, Microsoft hopes, useful feed that will help you keep track of your school, work or personal projects. In theory, you'll spend less time rummaging through apps and more precious minutes finessing documents.

At the bottom of screen, you'll find a plus icon that reveals three additional options: Note, Lens and Documents. The first creates a post-it style note that is immediately added into your chronological feed. It's a useful way to scribble thoughts or reminders during meetings, or add an explanatory note to an Office file that you might need later. Curiously, though, this feature doesn't use or support Microsoft's OneNote service. A spokesperson admitted that multiple testers have requested this feature, and promised that the Office team would take it under consideration. 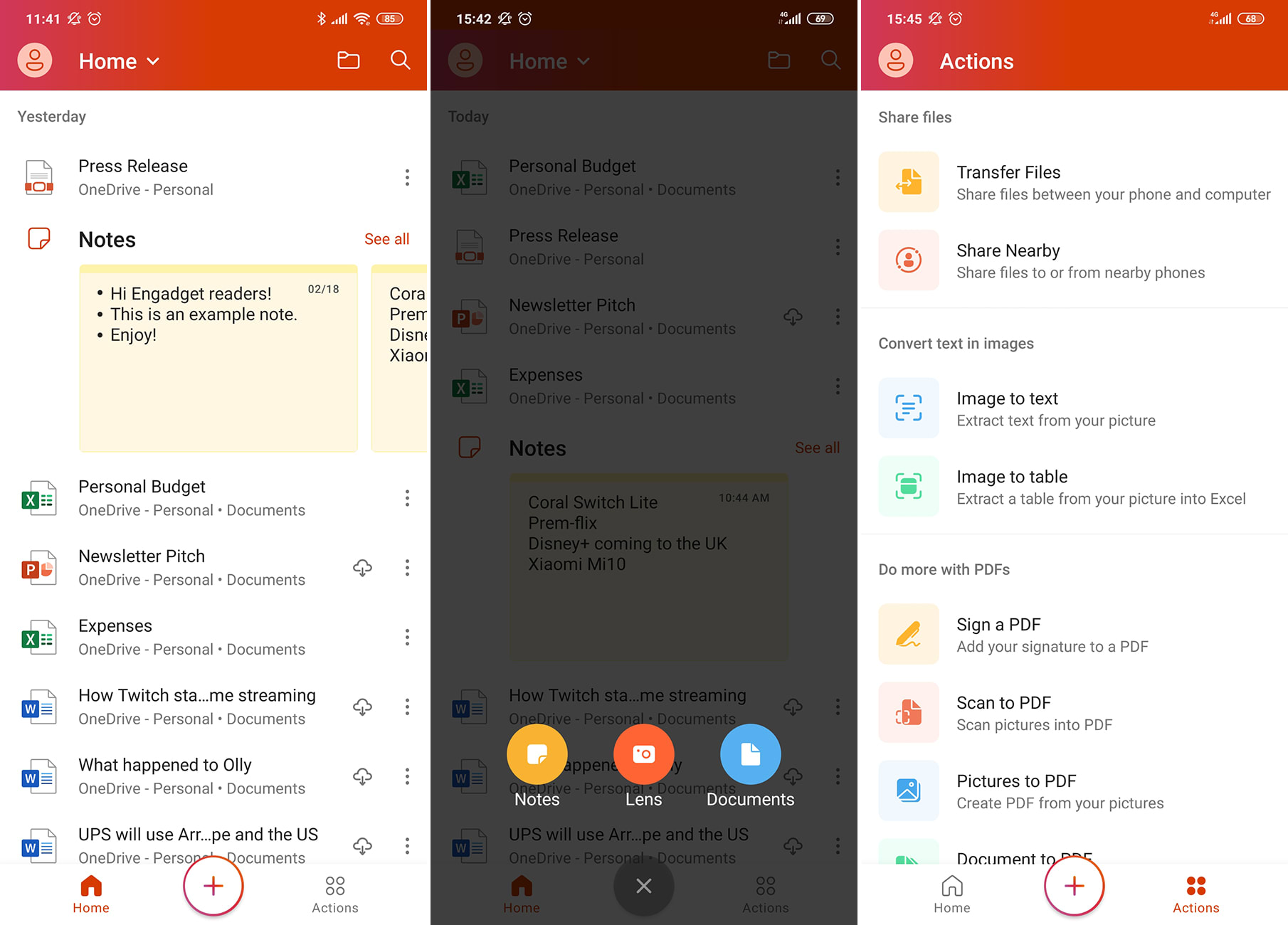 The home feed, 'Plus' button shortcuts, and Actions section.

Lens, meanwhile, is a document and whiteboard-scanning tool that's been available for years as a standalone app. The final option, Documents, brings up nine shortcuts that help you get started in each of the Office apps. These include Blank Document for Word, Scan Table for Excel and Create from Template for Powerpoint. They're all self-explanatory and there's enough white space on the screen that Microsoft could add a few more, if required.

The Office app also has an Actions section that offers further shortcuts. These are useful tools that users might not know exist, or have problem finding inside their favorite Office apps. There's a PDF section, for instance, with one-tap shortcuts for hand-signing a PDF and converting a Word document into a PDF. The Office team has added a couple of brand-new features, too, such as the ability to share files to a nearby phone.

Crucially, the Office app contains a full-fat Word, Excel and PowerPoint editor. A Microsoft spokesperson said the company intends to retain feature parity between the standalone versions and the new Office app. If you prefer the original versions, though, don't fret -- they're not being retired and will be developed alongside the Office app going forward.

Files can be stored locally or through a cloud-based service such as OneDrive, Google Drive, iCloud, Dropbox and Box. If you have an Office 365 or Microsoft 365 subscription, the app should also grant you the same premium features that you would expect to find inside the original Word, Excel and PowerPoint apps.

Today, the company is also revealing some features that will ship "in the next few months." These include dictation for Microsoft Word and a special 'Cards View' that turns long Excel rows into a more smartphone-friendly vertical list. PowerPoint, meanwhile, will be getting an 'Outline' option that lets you quickly create, title and order slides for your next presentation. Powerpoint will then turn that skeleton into a barebones but perfectly presentable slide deck with nice typography, iconography and styling.

If you're interested in the new Office app, it should be available to download now through the Play Store and App Store.