The feature could be implemented as soon as next month.
I. Bonifacic|02.20.20
@igorbonifacic

Twitter is testing a new feature that -- if implemented -- will prominently flag misleading tweets from politicians and other public figures, according to NBC News. As seen below, the feature adds red and orange badges to tweets the company has deemed "harmfully misleading," followed by information from verified fact-checkers and journalists.

For example, in the tweet below about the similarities between coronavirus and HIV, the follow-up message clarifies that a lot of viruses share traits with HIV. It also adds that there's no evidence to suggest coronavirus is human-made. Critically, the feature gives accurate information as much prominence as the original tweet. 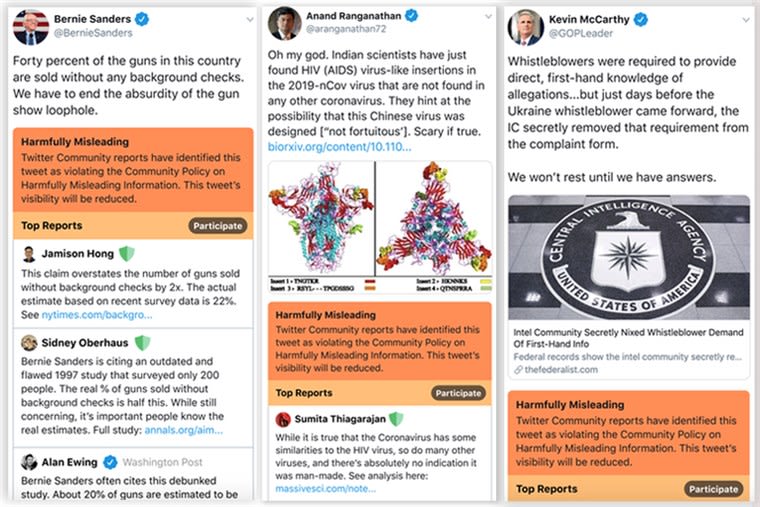 Twitter emphasized to NBC News the feature is "one possible iteration" of a new anti-misinformation policy the company plans to implement on March 5th, the same day its recently announced ban on deepfakes goes into effect. "We're exploring a number of ways to address misinformation and provide more context for tweets on Twitter," a spokesperson for the company told the publication. "Misinformation is a critical issue and we will be testing many different ways to address it."

In turn, the flagging system could be complemented by another upcoming feature that would allow people to earn points and badges for helping the company moderate the platform. According to NBC News, the demo it saw asked users to rate how "likely" or "unlikely" they thought a tweet was "harmfully misleading." Using a sliding scale between 1 and 100, they then had to rate how many other people would answer in the same way. As with the flagging system, Twitter emphasized it may not implement the community feature. "This is a design mock-up for one option that would involve community feedback," the company told NBC News.

Twitter has reportedly been working on tools to stop the spread of misinformation since at least 2017. With the 2020 presidential election coming up, the company recently announced a feature that will allow people to report tweets that share misleading information about how and where to vote. Beyond the tools detailed in this latest report, it's likely the company has other ones in the works as well.