It offers easy Bluetooth pairing with two devices and a 24-hour battery.

You call that puny wireless thing sitting in your backpack a speaker? This is a Bluetooth speaker: Meet Ultimate Ears' Hyperboom, a $400 13-pound beast that'll let you jam out to serious sound just about anywhere. Unlike the Megaboom 3, the previous top-of-the-line option from Logitech's Ultimate Ears brand, the Hyperboom is powerful enough to pump out music for a decently sized party. And based on my testing, it's a decent option for anyone looking for a sonic step up from smaller Bluetooth speakers.

While the Hyperboom might seem expensive compared to the $170 Megaboom 3 and other options below $200, you get significantly more sound for the price. Its large frame houses two 1-inch tweeters, dual 4.5-inch woofers and another two large 3.5-inch passive radiators, all of which can spit out up to 100 decibels of sound. With a frequency range between 45Hz and 20KHz, it can also deliver some truly deep low notes. Logitech claims you'll get up to 24 hours of battery life (but only 3 hours if you play it full blast like a crazy person).

You can think of the Hyperboom as two well-equipped speakers shoved into a very large box. Instead of the circular design UE helped to popularize with its previous Bluetooth speakers, the Hyperboom is basically a plastic rectangle draped in technical fabric. The company tells us that's a more efficient use of space, but that also means it only offers 270-degrees worth of sound, instead of a full 360 degrees like its smaller offerings.

When it comes to controls, you've got two large capacitive touch volume buttons, along with a four-way circular pad for changing inputs and a button for playback. You can rest easy about party accidents too, as its IPX4 rating makes it water resistant (but not waterproof). The Hyperboom connects to Ultimate Ear's Boom app for additional customization, and you can even join it to other Boom and Megaboom speakers with the "Party Up" feature to spread out the sound. 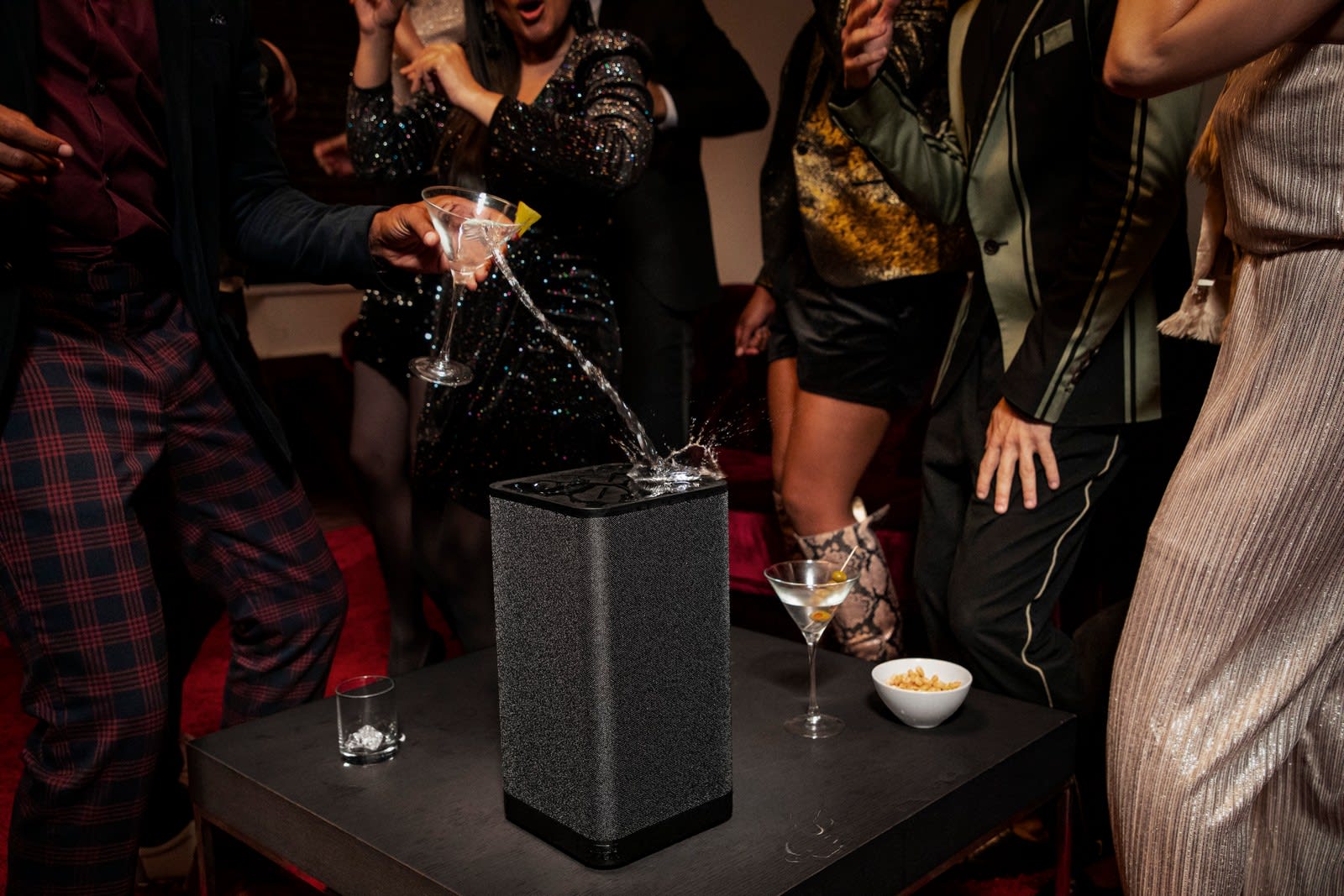 Based on its size alone, I expected the Hyperboom to deliver some massive sound -- and it didn't disappoint. Playing Led Zeppelin's IV via Amazon Music's HD codec was a near religious experience, with the sort of staging and presence I'd expect from my Pioneer Elite home theater towers. The Hyperboom handled the dynamic range in "Stairway to Heaven" like a champ, from the quiet opening guitar riffs to its explosive crescendo. Most importantly, it maintained that sound quality even when I pumped the volume up all the way. That was too loud for my Brooklyn apartment -- my floors were shaking and my cats were freaking out -- but ideal for throwing your own mini dance party in the park.

Ultimate Ears also came up with a smart solution to keep your party going when switching sources. The Hyperboom can connect to two Bluetooth devices at once -- but crucially, it can also pair with a new device while continuing to play music from another. It even gently fades audio in and out as you switch between sources. You can also plug in any device into the speaker's 3.5mm auxiliary jack, and you can get a pure digital connection to a TV or game console with an optical input. I didn't expect to see optical in a party speaker, but it's a useful addition, since it effectively makes the Hyperboom a high-quality portable soundbar for TVs. 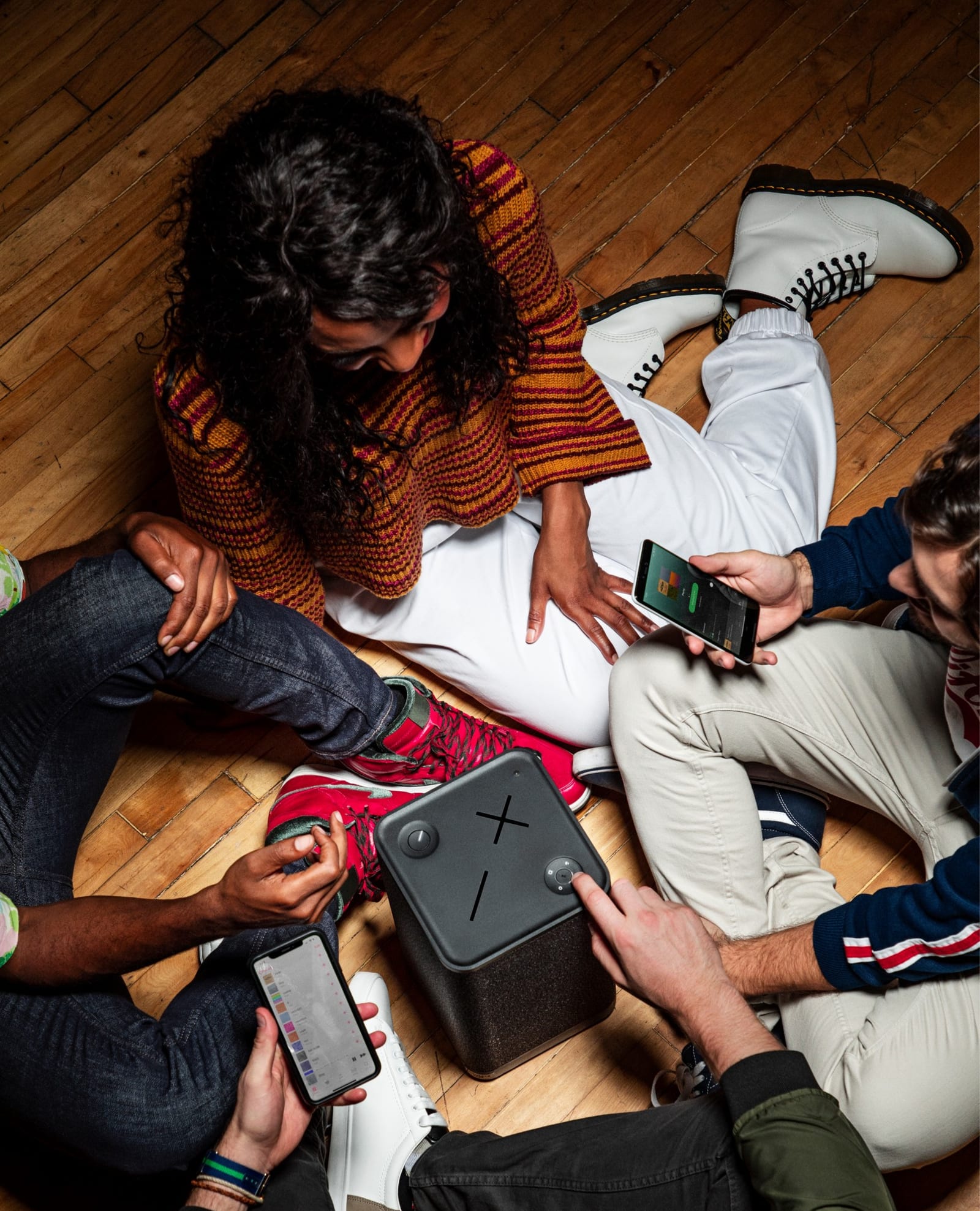 Ultimate Ears is competing with other pricey party speakers like JBL's Party Box 300 ($450), but those also tend to be significantly heavier. That JBL speaker weighs a whopping 35 pounds, while one of our current favorites, the $999 Soundboks 2, clocks in at 32 pounds. So sure, the Hyperboom certainly looks imposing, but it's far friendlier on your back. There's also the Sonos Move, which weighs half as much, but doesn't sound great when compared to larger speakers.

You'll be able to pick up the Hyperboom at retailers in early March, just in time to prepare for spring shindigs.