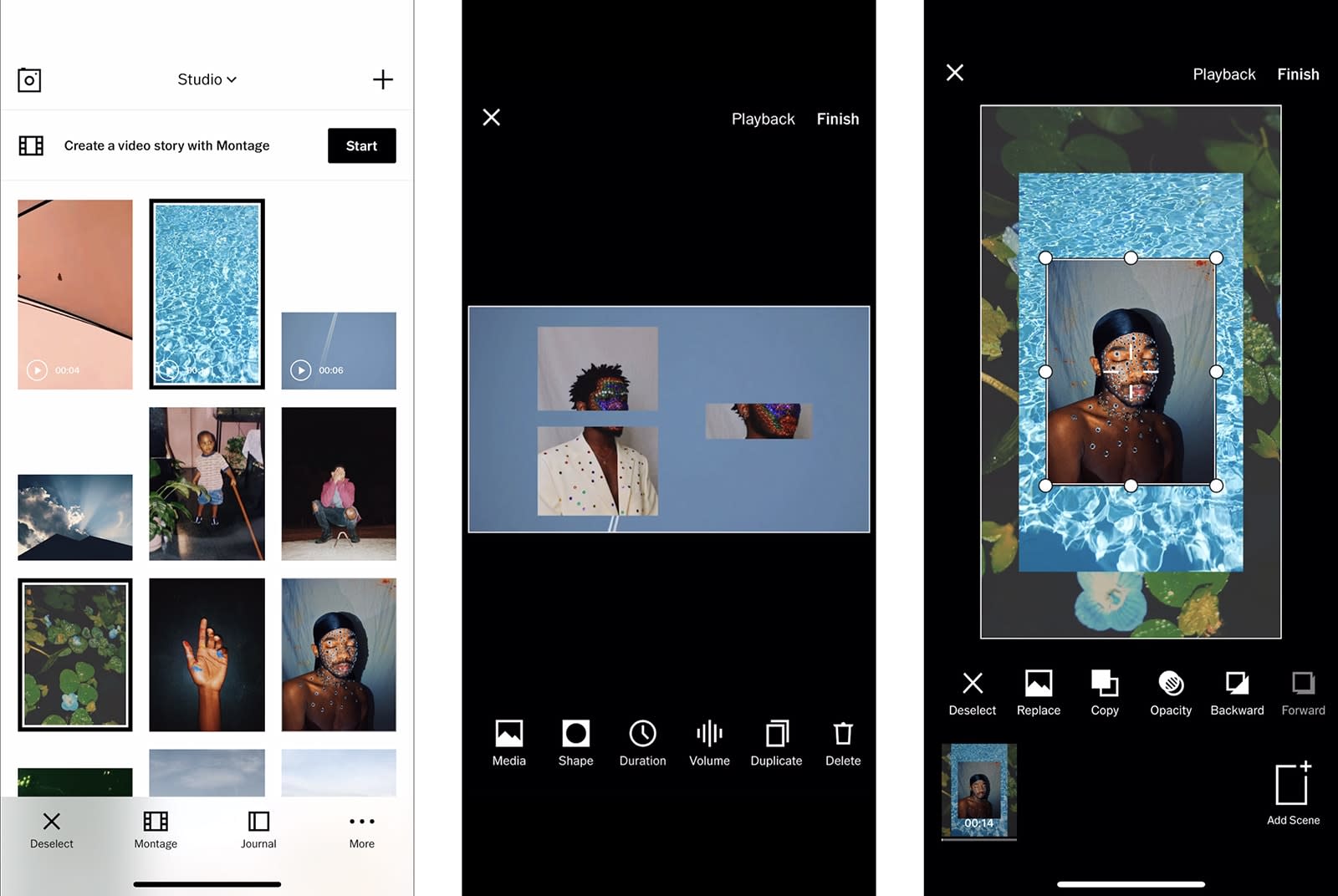 VSCO is an app known for its extensive photo editing capabilities, which has made it a favorite among serious mobile photographers. Over the years however, it added a few more features, such as basic video editing plus a simple stripped-down social network that doesn't have comments or likes (it's more about keeping up with creators rather than family and friends). Recently, however, VSCO has been doubling down on video. It acquired camera company Rylo last year, and it finally allowed users to upload videos to its social feed last month. Now, the company is ready to launch yet another, more ambitious video project, called Montage.

As mentioned, VSCO's current video editing capabilities are fairly basic; they're really just repurposed photo filters, which don't allow for a lot of creativity. Montage, however, is different. VSCO describes it as a multimedia creation tool that lets you combine a variety of photos, videos, colors and shapes into your very own video collage.

VSCO showed me how it works in a brief presentation. You would first access your VSCO Studio library, at which point you would select the "create montage" option. From there, you can choose an aspect ratio -- either portrait, landscape or square -- along with your choice of photo or video, which can be either from your existing VSCO studio workspace, or your phone's camera roll. These photos and videos can exist in a single scene, or multiple scenes.

From there, you can let your creativity run wild. You can add stacks of photos and videos in multiple layers, paste in shapes of different sizes and colors, adjust the opacity of any level to create a cool transparency effects like customized gels or double exposures, or even splice two video clips in the same exact layer (so, for example, you can watch two videos at the same time in one shot). The video and photos can be resized however you want, and you can have multiple visual elements on screen at the same time.

A VSCO spokesperson said you could potentially use this to create a fancy slideshow or perhaps a way to capture vacation memories in a more unique way. I personally thought it could work great as a customized video greeting card. Yet, the whole process looks a little daunting to me. It almost has too many features, and I wish there were beginner templates of some kind. VSCO told me they didn't have any templates because they wanted Montage to be a blank canvas. Yet, it does understand the intimidation factor, and hopes to lower the learning curve with a few tutorials and a FAQ section.

According to VSCO, there is no limit to the number of scenes you can add in a Montage, and it can be as long as you want if you just save it to your camera roll. If you do want to upload the videos to your VSCO social feed, however, you'll have to cap them at the two-minute mark.

That said, you can't save or upload the Montage video at all if you don't have a paid VSCO subscription, which is priced at $19.99 a year. You can still play around with Montage if you're not a subscriber, but you can't do anything with the resulting video afterwards. If you do subscribe, you'll also get exclusive access to high-end photo filters and presets, along with the aforementioned video editing feature.

If you're still wary about it, however, VSCO does offer a seven-day free trial of VSCO X. The Montage feature is rolling out globally starting today to both iOS and Android apps, so you'll have a chance to try it out soon.

In this article: gear, mobile, vsco
All products recommended by Engadget are selected by our editorial team, independent of our parent company. Some of our stories include affiliate links. If you buy something through one of these links, we may earn an affiliate commission.