It's unwieldy, but at least the company is trying something different.
C. Low|03.05.20
@cherlynnlow

It's no surprise that 2020 continues to be the year of foldables. We've already seen the Motorola Razr and Galaxy Z Flip go on sale, and TCL is ready to wow us with more. But don't get too excited. It's only showing us concept devices, not products it actually plans on launching (yet). The company has unveiled two prototypes -- the results of its experiments to see what's possible with flexible screens. One of these is what TCL calls its tri-fold tablet concept, which is a screen that folds twice to create three panels. The more interesting of the pair is what the company says is the "world's first rollable extendable display smartphone concept."

I got to check out the tri-fold tablet and a mock up of the extendable, which did not have a working screen. The former is a 10-inch 3K screen that folds twice in a Z-shaped configuration to become a 6.65-inch phone with a 20.8:9 aspect ratio. There are two hinges beneath the display -- one folds outward and the other folds inward so you're sort of getting a Galaxy Fold and a Huawei Mate X stuck together. When it's folded, the tri-fold prototype is incredibly thick. We called the Galaxy S20 Ultra "thicc" in our review -- the tri-fold as a phone is phat. It's about two-and-a-half S20 Ultras thick!

Trying to open and shut the prototype was nerve-wracking. The hinge required some force to bend, and managing two hinges felt too complex for someone as uncoordinated as myself.

Although its screen was working, the tri-fold prototype wasn't fully set up and had no apps installed. All I could do was play a demo video and navigate around a barebones Android interface, so I can't tell you how easy it might (or might not) be to multitask on this thing. But TCL has dreamed up some intriguing scenarios for how you might use a device like this.

The most obvious application is running three apps side by side, which the demo highlighted, but it was also interesting to see other modes. For example, a photo app that uses the right third for controls and the left two-thirds to display the image being edited. You could also split the screen across two apps and adjust their widths to suit your needs -- a messaging app could take up just a quarter, while you devote the rest of the panel to your spreadsheet, perhaps. You could also lay the tri-fold on a table and set it up almost like a laptop, using one folded panel to prop it up and the bottom screen as a digital keyboard.

Since this is such a new concept and software isn't one of TCL's strengths, I can understand that the company doesn't have working apps that take advantage of this triple-panel format yet. But it's also not making these widely available, and developers might not want to waste their time working on apps for a format that might never go mainstream. TCL needs to work harder to inspire more interest.

TCL also showed us a video and a dummy of its extendable rollable prototype -- the functioning unit was in China. In the video, the phone's frame slid out, pulling an unrolling screen along with it -- sort of like a mini LG rollable TV. When fully extended, the display is 7.8 inches. In its original "closed" state, the phone is 6.75 inches. Think of this as a scroll. When you need to put it away, the screen rolls and wraps around the rear of the device. It slides inside the phone, though, and the display isn't exposed when closed.

The mock-up at my demo had what felt like a piece of plastic with a sticker pasted on top of it in place of the screen, so I really can't tell you how effective it is.

I can say that the dummy, which has the same 9mm profile as the working unit, was quite difficult to open. I needed to pry the inch-wide bar apart from the rest of the phone's frame to get a grip before I could begin extending the device and unrolling the screen. TCL said that the working unit would have an onscreen button to trigger the sliding mechanism and that people wouldn't be expected or allowed to pull it open themselves. That's probably for the best; I could see people unintentionally ripping this apart with too much force.

That said, I am intrigued by what future iterations of this could enable. It's significantly smaller than folding devices with a similar screen size and seems to offer more protection for the unused screen. The challenge would be coming up with apps that understand when the screen is completely unfurled, or if it is only slightly extended, and then adapting to the different widths.

Without a working demo, though, it was difficult to gauge how effective this setup is. Plus, the industry is still struggling to adapt software for more-conventional foldables like the Galaxy Fold, Moto Razr and Z Flip. It will be a while before people turn their attention to a phone with a rolling, extendable display that's the only one of its kind. 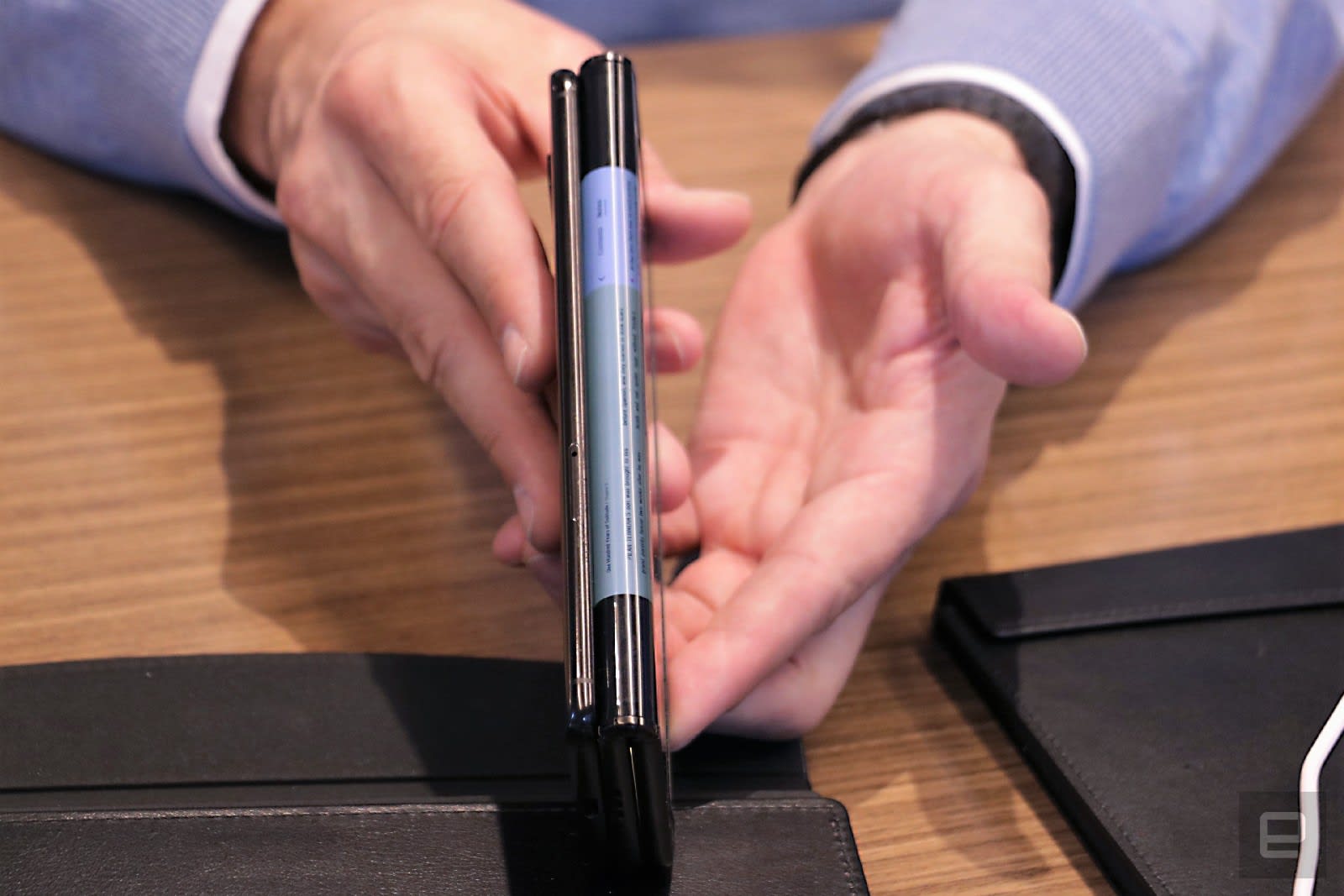 But TCL has been teasing us with foldables for a long time. It showed off its first foldable concepts at least two CESes ago, and those were more conventional designs similar to the Galaxy Fold. The company's general manager of global marketing, Stefan Streit, explained that it's waiting to launch something real because the software simply isn't ready yet. "We don't want to make the user a beta tester for us," he said.

Another reason is cost. TCL's typical MO is to sell affordable options for the more budget-conscious shopper, and folding-screen technology is still too pricey for the mainstream. I admire the restraint and the desire to make something that works, but TCL will continue to lag behind the competition if it keeps waiting.

Of the two TCL concepts, I find the extendable more compelling. But it also gives me more cause for concern. Will it be easier to break than a foldable, because it requires the user to pull it open? How will apps know when a screen is being unrolled, and should they adapt to fit every possible width of the display? These are issues that require more widespread and comprehensive testing to understand.

A wait-and-see approach is safer, but it doesn't guarantee that the resulting products will be better than the competition. For now, it's clear TCL is preparing to do something. What that might be and whether it will be successful remains a mystery.

%Breakout-1118322%
All products recommended by Engadget are selected by our editorial team, independent of our parent company. Some of our stories include affiliate links. If you buy something through one of these links, we may earn an affiliate commission.