Lifting weights in a Panasonic exosuit destined for the Tokyo Olympics

Exosuits, exoskeletons and power-assist suits are mostly a thing of science fiction, used for battling alien menaces or lifting extremely heavy obstacles. Mostly. Now companies like Panasonic are making the case for actually using one. The reality is less about batting away threats and more about supporting workers with physically demanding or repetitive jobs and tasks. That was why Panasonic's Atoun Model Y was meant to go to the Tokyo Olympics, right?

At the World Para Powerlifting World Cup in Manchester, UK, last month, Paralympic athletes lifted for the title of world champion and the ranking points needed to get to Japan later this year -- if the Olympics and Paralympics were still happening. The bench-press competition was open to male and female athletes with eight physical impairments, with teams attending from Japan, Azerbaijan and more. 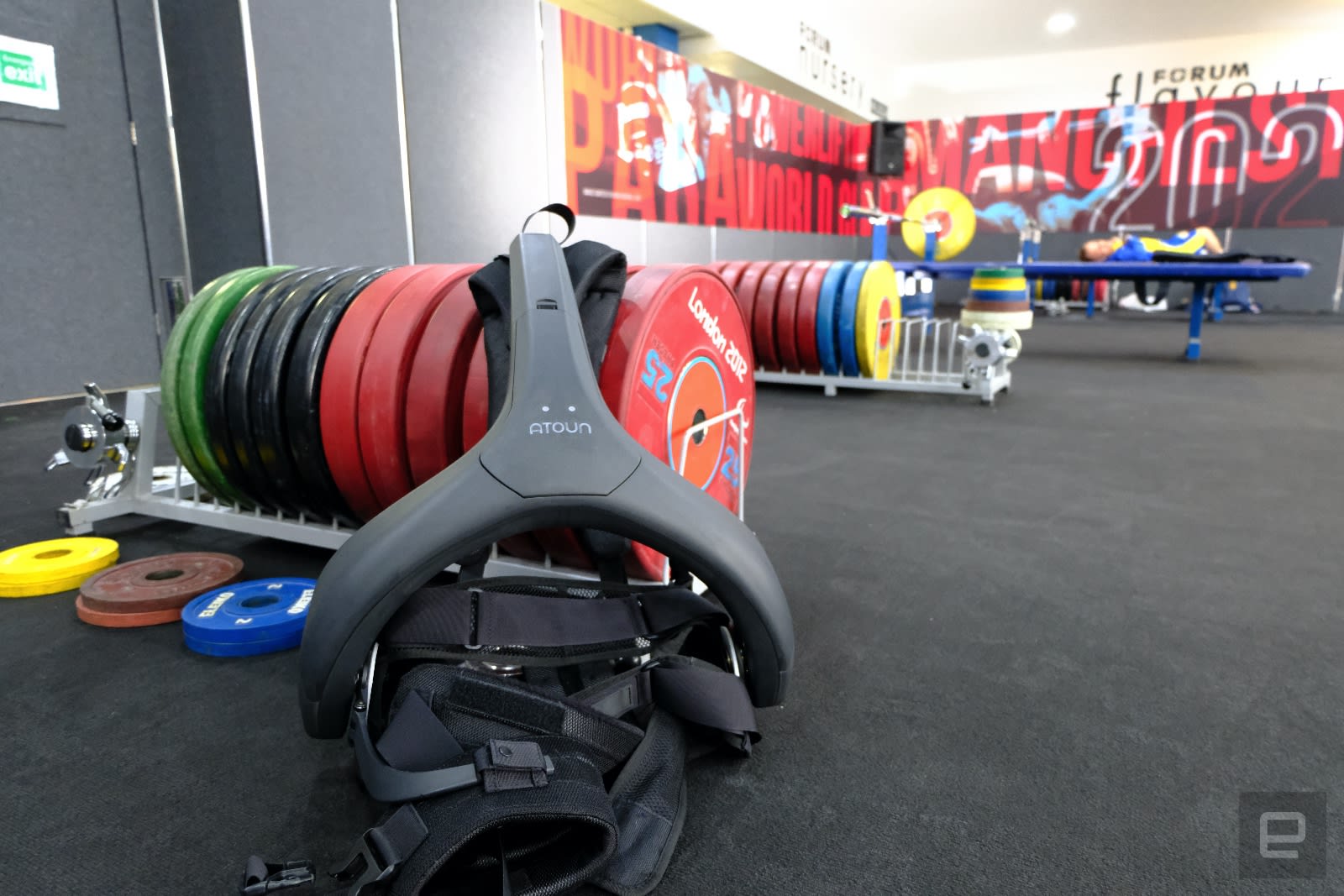 As the athletes settled under the barbell, assistants racked up the weight plates either side, helped by the ATOUN Model Y, which looks like a backpack without the pack part. The Model Y helps reduce the stress placed on the waist and lower back, with built-in motors pulling straps tighter (or loosening them), in sync with the person's movement. In physics terms, it's compensating for what Panasonic calls the "average motor action potential" of the person wearing the power assist suit. Following its appearance in the UK, Panasonic's Power Assist Suit was officially selected by the World Para Powerlifting for use during the Tokyo 2020 Paralympic Games -- which will now be held in 2021.

I got to test it for myself. It's easier to equip the power suit with help from someone else, but with some practice, it's entirely possible to put it on yourself, like a hiking backpack. As well as the requisite backstraps, there's a waist strap for support and a strap that goes around each thigh. These aren't just to support the suit (it weighs less than five kilos, total), they also help align the sensors that'll help the power suit do its job. There's a control array on the side, with a simple power switch and buttons to adjust the assist level.

I went full power. Lifting the weight plates while equipped with the Model Y feels like a very mild deadlift -- the collection of motors and pullies hugely reduce the tug on lower back muscles. The system is more like a gentle helping hand. I'll admit I was disappointed that this power assist suit didn't augment my own strength. I wanted to strap in, flip a car and scream "I am a god!" at Panasonic's engineers. Perhaps, fortunately, that's not the point of the Model Y. 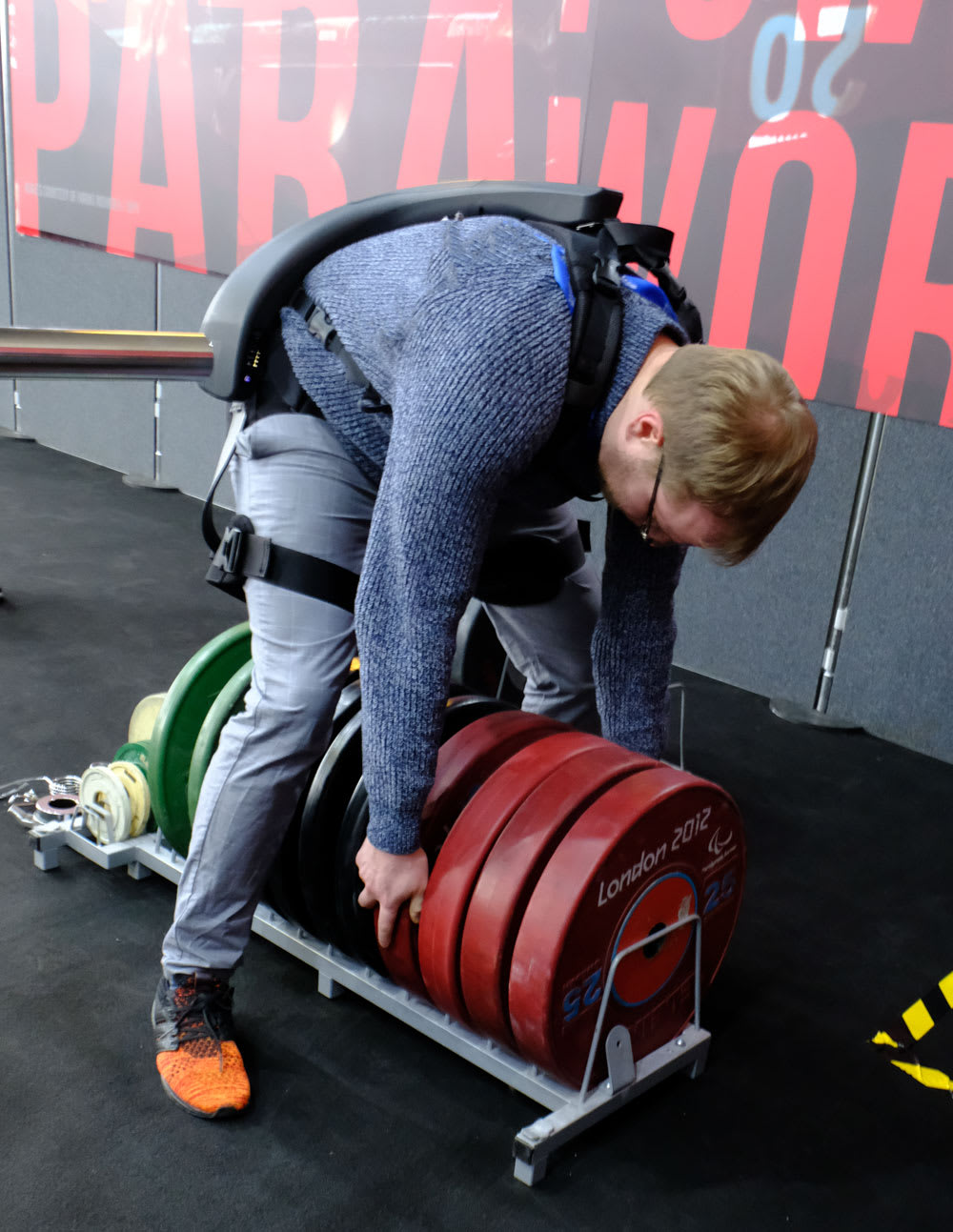 Unstrapped, I lifted the 20-kg plates again, under my own steam. I felt a harder 'pull' returning -- it's not that I can't lift the plates without the Model Y, it's simply easier with it.

While most of us can handle lifting and moving a 10kg-weight plate or two, loaders during competitions like this will have to deal with bigger weight plates and shift more than 100 of them over the span of a competition. The reduction in muscle fatigue is apparently one of several benefits, according to Panasonic. The suits improve safety, helping spotters catch loose weights or when an athlete loses control of the barbell. With less stress on the loader's back, it speeds up the entire process, as they calibrate the weight on the bar for each athlete.

This was the first appearance of Model Y assistance at a powerlifting competition outside of Japan, but Panasonic's latest exosuit has performed the same duties at several meets in its home country. According to Takashi Tsurumaru, who works in the Business Development division of ATOUN (partially owned by Panasonic, which established the spin-off company), there have been no major changes to the suit between these competitions.

The Model Y does, however, come from a long line of power assist suits. Compared to the now-discontinued Model A, the Y is lighter and more streamlined. It weighs roughly 50 percent less, while it can work for twice as long between charges. The design is also far more streamlined. That said, in over 15 years of development, the models have got more expensive -- and bigger.

But at approximately 4.5kg, the Model Y is the lightest power suit in its class. It also has IP55 rating and can be worn outdoors and in rainy weather.

Those specs are further proof that the Model Y isn't built expressly for weightlifting competitions. In the run-up to this next year's Olympics, Japanese companies like Panasonic will be teasing the sheer breadth of technology it would showcase at the Games. The ATOUN Model Y was part of that, strapped on to assistants in airports so they could effortlessly unload suitcases. The company envisions the suits helping human labor in construction, farming and logistics -- anywhere repetitive physical tasks are commonplace.

Not the exosuit you're waiting for? 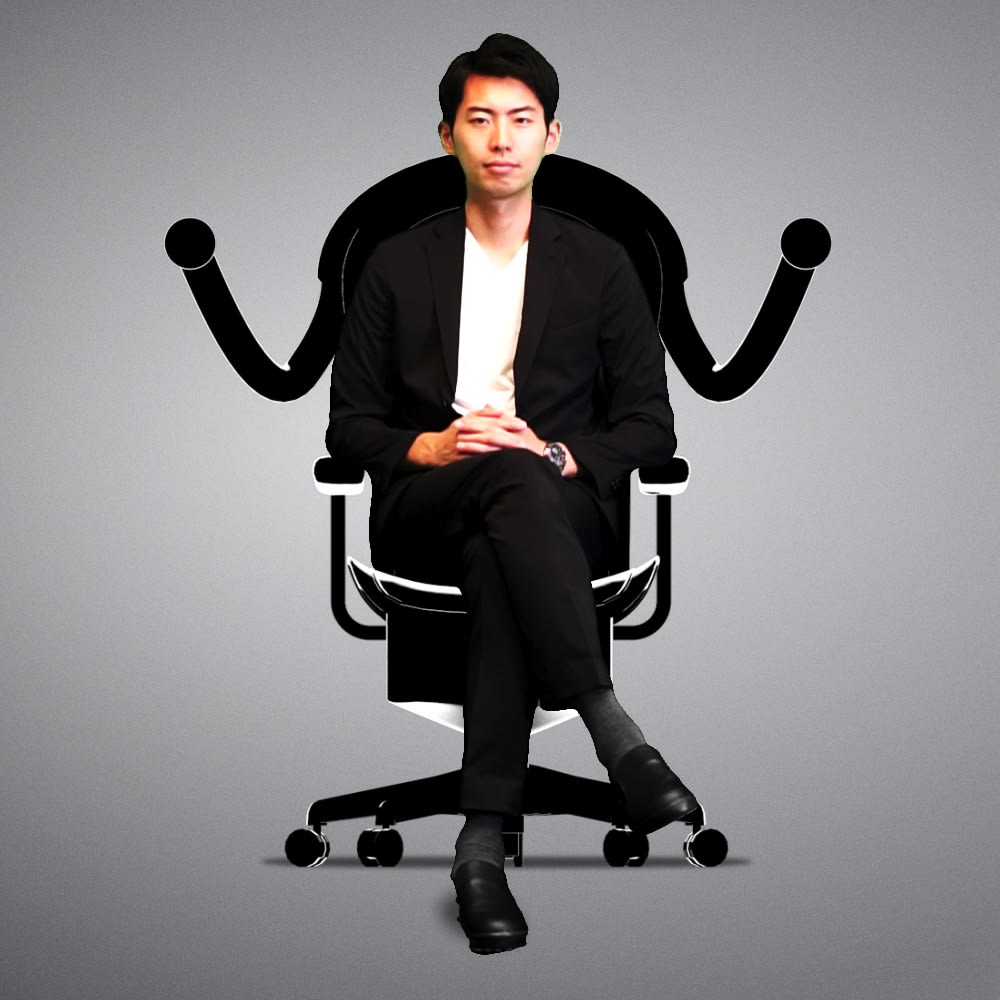 This might be the buttoned-up reality of suits for now, but the company has several prototypes that seem far more sci-fi. Its NIO project is a heavy-lifting exosuit that would look perfect on Ripley, while the NININ 'Intelligent Assist Chair', apparently aimed at office work, looks like the perfect work furniture for an evil genius.

Tsurumaru notes that nursing home staff could use power assist suits to lift or turn older patients. The ATOUN team is also looking into "walking assistance models" and locations where these exosuits could work. Companies in Asia are very much interested -- Panasonic says ATOUN has sold hundreds of power suits already.

Its appearances in Tokyo, whether on the Paralympic stage or merely at the airport, would have helped ATOUN garner international attention, but the rescheduled Tokyo Olympics have put a pin in those plans for now. Panasonic reiterated to Engadget that it was "committed to supporting the Olympics next year."

Perhaps by 2021, ATOUN will have a new model to showcase to visitors.