It also introduced new gaming features that only work on 2020 laptops.

NVIDIA has launched its latest Max-Q GPU refresh with new hardware like the RTX 2080 Super Max-Q GPU and upgraded features as well. As with the desktop hardware, the new products will offer a modest boost to gaming and content creation performance. However, NVIDIA has also introduced new Max-Q features that should boost performance and power efficiency significantly on all the Max-Q GPUs -- but only on new 2020 laptops.

First up, as rumored, NVIDIA revealed portable versions of the RTX 2080 Super and RTX 2070 Super Max-Q GPUs for flagship-caliber gaming and creator laptops. These will be NVIDIA's best laptop GPUs, though they have very similar specs to the older models.The RTX 2080 Max-Q will be discontinued, but NVIDIA will continue to sell the RTX 2070 Max-Q.

Both these GPUs will appear in high-end laptops like Gigabyte's Aero 15 and the Razer Blade 15, but the GPU hardware isn't the end of the story. NVIDIA has also introduced new Max-Q hardware features for the 2020 laptops that will boost performance significantly, it said.

The first is called Dynamic Boost. Before, the static thermal systems in NVIDIA GPUs would always use 80 watts while allocating 35 to the CPU. Dynamic boost can take that same 115 watts and distribute up to 15 percent more to the CPU or GPU on a frame-by-frame basis. That can boost performance by 6 to 8 percent on games like The Witcher 3 and Metro Exodus. 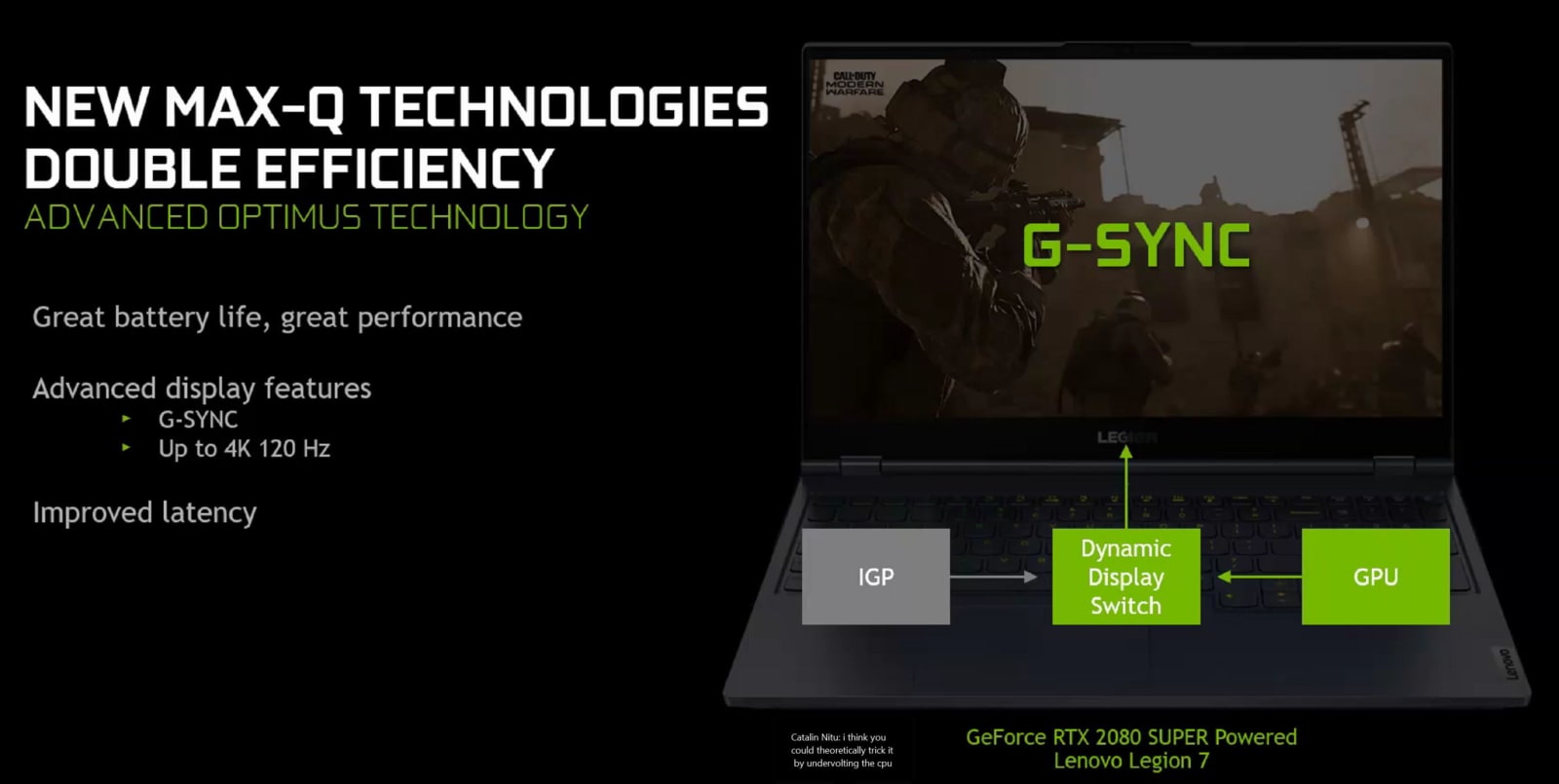 Another significant upgrade is NVIDIA's Advanced Optimus technology, essentially a controller that chooses either the GPU or integrated graphics for a given app. Before, the GPU wasn't directly connected to the display and had to drop frames onto the integrated graphics framebuffer. Now, it can drive the built-in display directly, improving latency and allowing G-Sync to work at up to 4K 120 Hz. The GPU is also now directly connected to the DisplayPort on your laptop so you'll see improved performance when using VR or an external monitor.

Since all of this new tech is hardware dependent, it will only work on the latest RTX and GTX laptops and not your pre-2020 RTX 2080 Max-Q model, for instance. And for now, it will only work on Intel-powered laptops, but NVIDIA did tell Engadget that it would come to AMD models "in the near future."

The good news is that the new tech will work across NVIDIA's entire 2020 Max-Q lineup from $699 GTX 1650 laptops up to RTX 2080 Super laptops that cost well north of $2,000. NVIDIA also noted that the entry price for an RTX laptop has dropped significantly, with RTX 2060 laptops like the Acer Nitro 5, ASUS Rog G512, HP Omen 15 and MSI GF65 Thin now costing as little as $999. All told, there are over 100 new gaming laptop models across all manufacturers.

On the content creation side, NVIDIA noted that manufacturers like Razer, Acer and Gigabyte are launching 10 new RTX Studio laptops, including 17-inch OLED and HDR models. There are now 45 apps that support RTX acceleration (to widely varying degrees) including Blender, DaVinci Resolve, Adobe Lightroom and others, NVIDIA said. We should be getting our hands on some of the new models soon to see if they measure up to NVIDIA's promises.