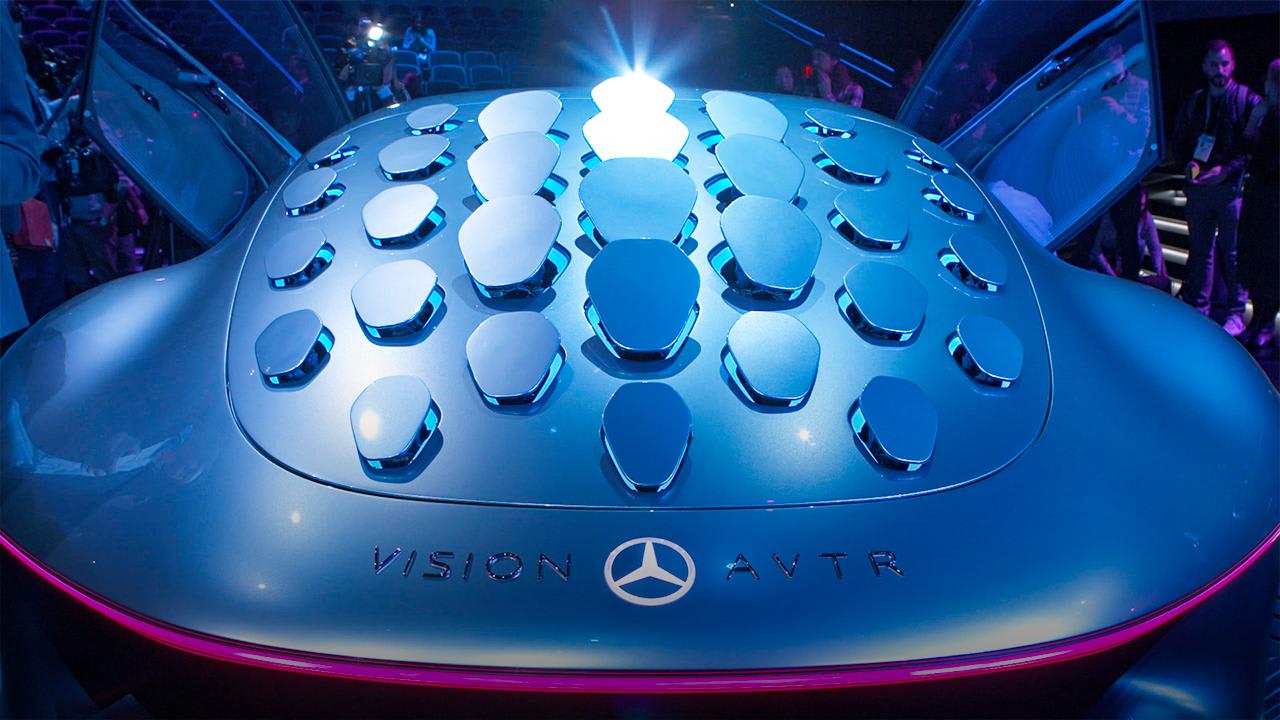 Mercedes has made sure to play up its tech chops during the past few CES events, and this year is no different. But instead of a straight autonomous electric vehicle, it's gone a little wacky with a vehicle that's based on the Avatar movie. Yep, the James Cameron film.

The Mercedes-Benz advance vision transportation (AVTR) is electric and can drive forward and sideways. The vehicle is a rolling light show with displays that spread out beyond the dash. As you can see in the photo above, it has clear doors -- you know, to get the driver closer to nature.

The vehicle uses biometric sensors to better bond with the driver. There's no steering wheel. You become one with the car. Sort of creepy. But it's a concept car, so it's unlikely your next S Class will want to merge with you so you can drive to work.

Interacting with the car's infotainment system is also different from anything else. While driving, you lift your hand and the interface appears on your body. The interface then follows your hand as you're making selections. The vehicle also has a bunch of gesture controls that are supposed to be more natural and don't require the driver to learn new hand signals.

One of the weirdest-looking features is on the rear hatch: Thirty-three circular hatches that open and close. They communicate with the driver and outside world. More likely it's just a fun thing to add to a concept car. During the event, Mercedes spoke at length about the car as almost a living thing and an extension of a person and nature. It's a lot of hyperbole, but it doesn't take away from the design, which is not only bonkers but also stunning.

The head of Mercedes-Benz, Ola Källenius, also detailed the automaker's plan to create a zero-impact car. "This may be in the distance, but it's our goal nonetheless," he said. It's that goal that got Cameron on board.

Director Cameron appeared onstage and said that a car wasn't obvious when first pitched to him. But after talking to Källenius about the company's vision for sustainability, he was all for it. "It was a total life cycle assessment," Cameron said. He added that he's now all about sustainability.

"When I look at this car here, I see a beautiful car," Cameron said. "I see the physical manifestation of an idea."

In this article: avatar, avtr, bestofces2020, business, ces2020, design, electric vehicle, ev, gadgetry, gadgets, gear, green, mercedes, mercedes-benz, tomorrow, transportation
All products recommended by Engadget are selected by our editorial team, independent of our parent company. Some of our stories include affiliate links. If you buy something through one of these links, we may earn an affiliate commission.