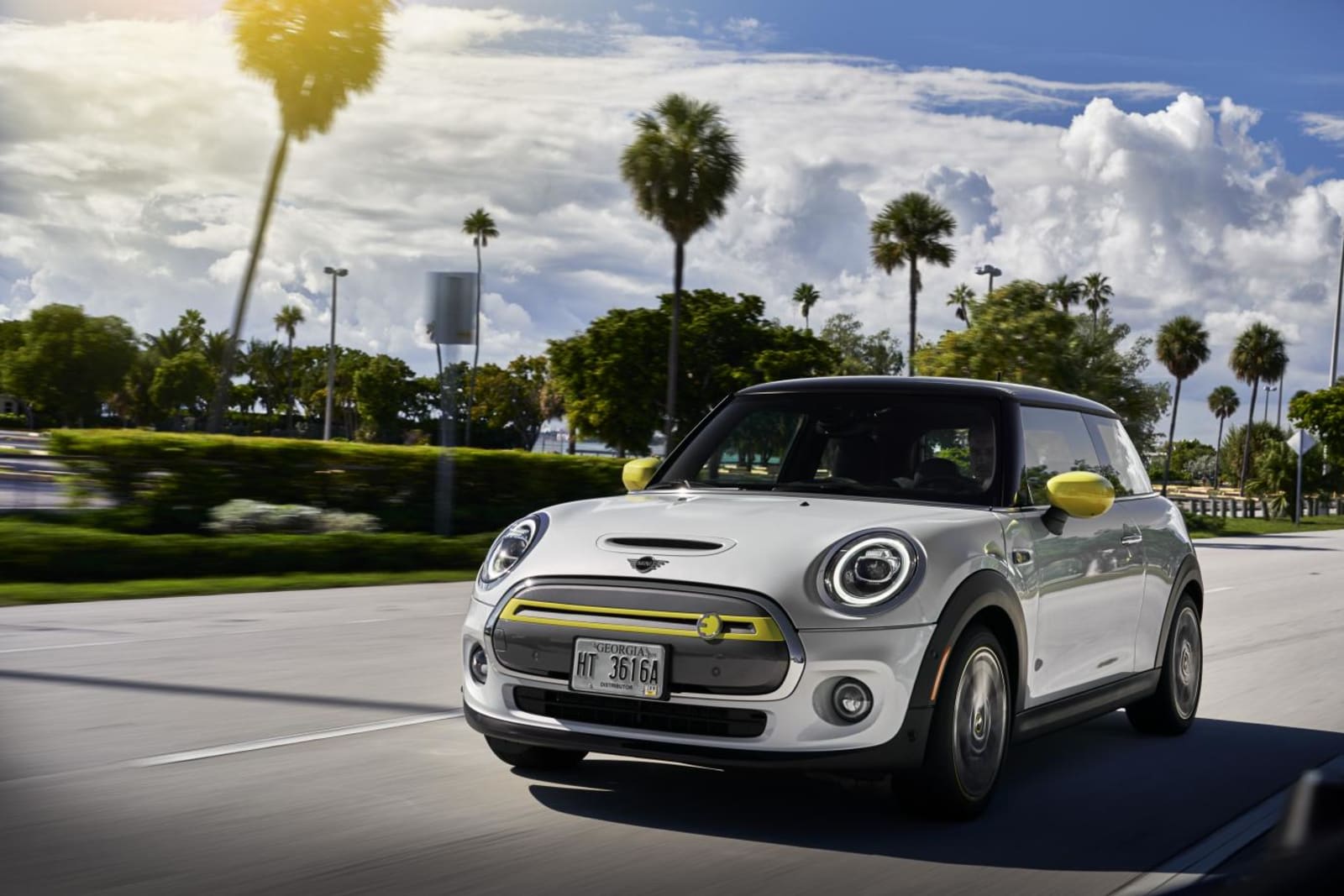 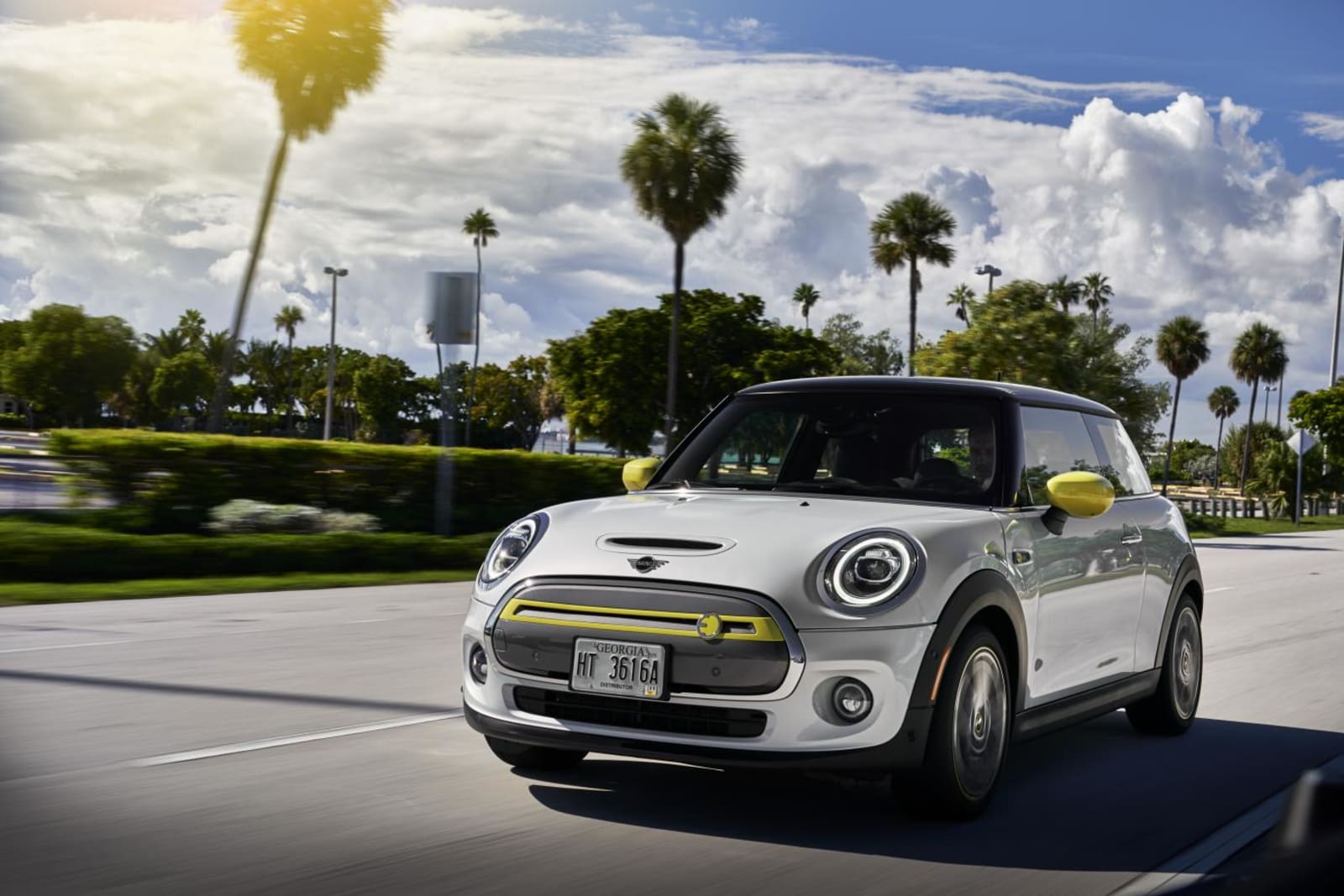 When the first Minis rolled off the assembly line in 1959, the diminutive front wheel drive cars practically sipped fuel through equally miniscule 850 - 1275 cc engines. 70 years later, the latest Mini has done away with the need for gasoline completely. This is the Mini Cooper SE, 2020's all-electric iteration of the iconic British automobile.

The SE is a Mini Cooper through and through; its design is based on the existing Mini 3-Door layout. Aside from its body sitting 18mm higher to accommodate the battery pack, the SE is nearly identical to its internal combustion bretheren. That battery offers 34.2 kWh capacity which, when compared to the Tesla S 100D's 100 kWh battery, is tiny. It's comprised of 12 cells arrayed in a T-shape which runs under the rear seats and up between the fronts.

Interestingly, while the battery adds a significant amount of weight to the vehicle, replacing the even heavier internal combustion engine (ICE) nearly offsets that increase. In all, the SE tips the scales at 1365 kg (~3009 lbs), just 145 kg heavier than the standard Cooper S. But what's really cool is that since the battery adds so much mass, the SE's center of gravity is actually 30 mm lower than the S. You can certainly feel the difference when aggressively cornering -- there's noticeably less body roll and less squirreliness from the vehicle's short wheel base.

Unfortunately the limited battery capacity also translates into an equally limited range. BMW, who has owned the Mini brand since 2000, estimates that drivers will only be able to squeeze 235 - 270 kilometers (~146 - 167 miles) out of a full charge. That's not unexpected, given the size of the pack, but still a bit disappointing. You're clearly not going to be able to take this on long excursions through remote regions, but the Cooper's were never designed to be touring cars. As an urban getaround or midrange commuter, the SE really hits its stride. On a single full charge, you could theoretically drive from San Francisco to Palo Alto and back for a full work week.

Plus, since there isn't much battery to charge, it tops off quickly. The SE can be recharged using a household 110V socket, a 240V wallbox, public charging stations, or fast direct-current charging up to 50 kW. It takes around 3.5 hours using a 11kW Type 2 connection but as little as 35 minutes if you can find a 50kW DC fast charge station.

Your available range between recharges may be limited but the SE's performance all but guarantees you'll have a blast while behind the wheel. I was granted an opportunity to drive the new Cooper SE through Miami and Ft Lauderdale last week -- two cities where the traffic patterns on both surface streets and freeways regularly oscillate between bumper-to-bumper gridlock and Mad Max Fury Road levels of driving insanity.

I drove past multiple vehicle fires and multi-car collisions on the I-95 during the five hour demo drive. Did I stick around to rubberneck? Heck no, I stomped on the accelerator and got past the flaming wrecks as fast as possible before some inattentive yahoo watching the cars go up in smoke came barreling up my tailpipe. Figuratively of course, EVs don't have tailpipes.

And with the SE, that quick escape was a cinch, especially when running the vehicle in Dynamic (sport) mode. You need only tap on the accelerator and the SE will take off like a shot. I had no issues getting up to freeway speeds, overtaking vehicles, or catching up to traffic after not noticing the light change. Dynamic mode does tend to chew through the vehicle's power reserves so I set the SE to Mid for a majority of the trip. It's much easier on your battery supply but the drop off in performance is noticeable. It's not bad, but I found myself silently urging the SE to accelerate faster after switching down from Dynamic. If you are low on power or want to stretch your range as far as it will go, the SE also offers Green and Green+ driving modes which further reduce draw at the expense of performance.

One thing that really bugged me during the demo was the regenerative braking system. It offers two settings to dictate how aggressively the system engages and on the highest setting, watch out. You don't even need to use the brake pedal because the second you take your foot of the accelerator, the brakes are fully engaged and biting down. Hard. I found myself never really removing my foot fully from the pedal, instead, constantly modulating the competing forces of moving and stopping to drive. It was exhausting and, until I got accustomed to the feel, I kept stopping close to a car length short of the vehicle in front of me at lights (which very much pissed off the drivers behind me). Luckily, that feature can be reduced with the flick of a switch and you can use the standard two pedal system like a normal person.

At one point during the drive, while stuck in traffic as a drawbridge raised to accommodate a passing schooner, I was able to take in the vehicle's well appointed interior. The SE offers a 5.5-inch color central display as well as a digital instrument cluster mounted on the steering column. It's also got a slick little pop up HUD on the driver side dashboard that shows your speed, the posted speed limit and the upcoming turns for whatever route you've programmed into the Nav system. I was a fan of pop up HUDs when I drove the Kona EV in 2018, and I'm especially a fan of them in the Cooper SE.

Despite it being a Mini, leg space is not an issue, so long as you're sitting in the front. I'm 6'1" and getting my seat far enough back to comfortably operate the vehicle left no space for a passenger to sit behind me. I could fit a mid-sized dog or a cat carrier back there but dangling appendages in the rear seat were a hard no. Storage is limited as well, though what did you expect from a Mini? With the rear seats up, you're looking at 211 liters of trunk space -- roughly enough to fit both a checked and a carry on suitcase back there. Fold the rear seats down to expand that capacity out to 731 liters, easily enough for me to fit a month's worth of groceries in.

The SE will offer a quartet of trim packages. Trim S and Trim M offer the standard Connected Navigation while Trims L and XL net you Connected Navigation Plus upgrade. Trim S only offers a pair of exterior colors (Moonwalk Grey metallic and White Silver metallic) though Trims M and L have those plus Chili Red, British Racing Green metallic and Midnight Black metallic. Trim XL also exclusively offers the MINI Yours Enigmatic Black. If the yellow accents on the grille, wheels, and side view mirror caps are a bit much for your taste, they can be optionally recolored to the vehicle's exterior color, white or black.

The Mini SE will hit show floors across the country in March with an MSRP of just $29,900, and that's before federal EV tax credits kick in.

In this article: Cooper SE, electric vehicle, gear, hands-on, Mini, transportation, vehicles
All products recommended by Engadget are selected by our editorial team, independent of our parent company. Some of our stories include affiliate links. If you buy something through one of these links, we may earn an affiliate commission.