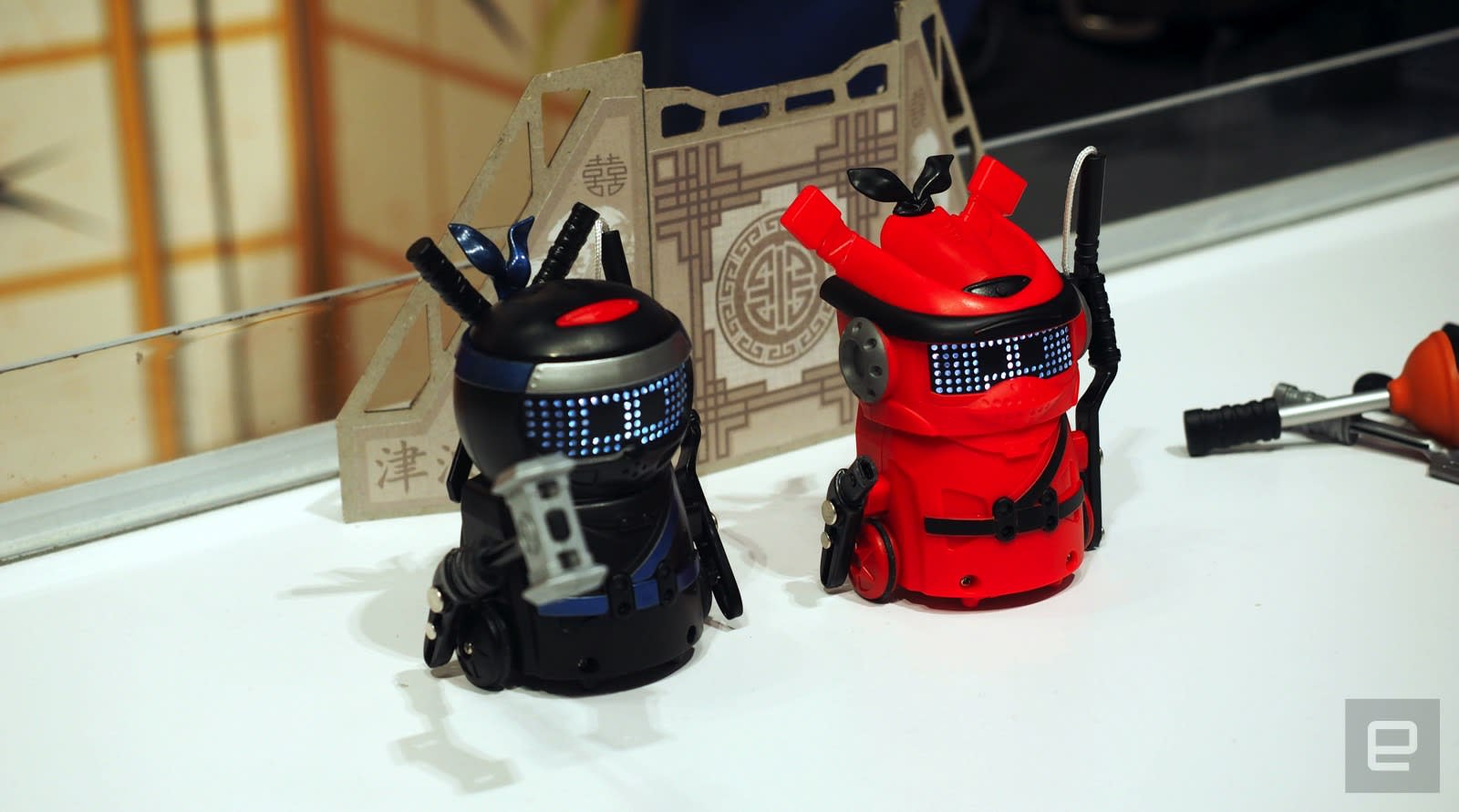 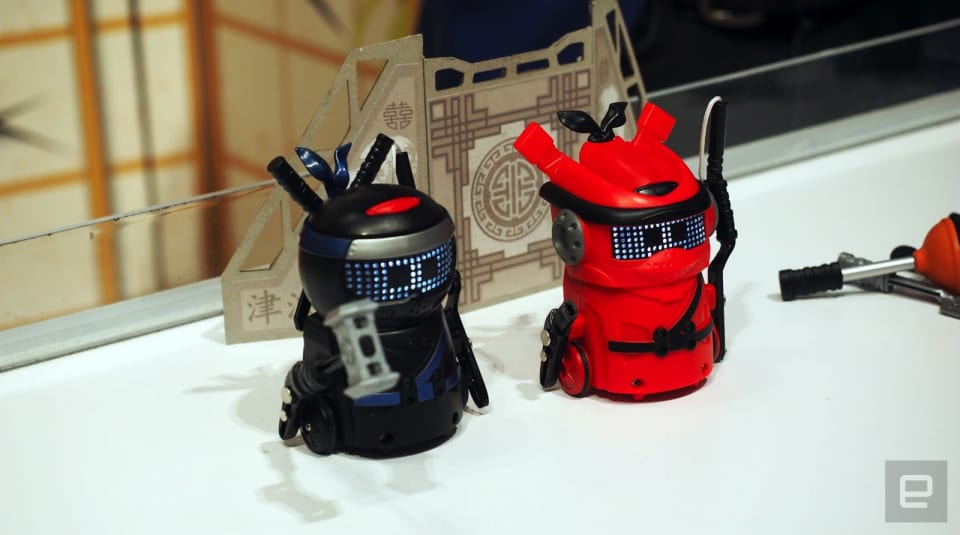 Do you remember the old Teenage Mutant Ninja Turtles cartoon from the '80s? Shredder's minions were all featureless humanoid robots, which our heroes could could slice and dice without guilt. At this year's Toy Fair, Spin Master's new product answers the question: What if the ninjas were the robots?

Unlike the Foot Clan, NinjaBots aren't human shaped; they're more like little red, blue or black stubby bottles on wheels... with nunchucks. But the NinjaBots are packed with plenty of human emotions. They'll make wisecracks, smack talk their opponents and do a little victory dance when they've triumphed. So really not like real ninjas, but still pretty enduring.

NinjaBots are based on Spin Master's previous toy automaton Boxer (itself very similar to Anki's Cozmo), utilizing a lot of the same interior tech and sensors. It's also got the same emotive eyes reminiscent of Wall-E, but its programming is very, very different. Boxer enjoyed playing simple games like soccer and interacting directly with its human, while NinjaBots are programmed to seek other robots out and just start wailing on each other with their little arms. Each arm is equipped with a different weapon; one is always holding nunchaku while the other can be swapped out for things like a hammer, frying pan or a plunger. Thanks to a sensor inside the NinjaBot it knows which weapon you've equipped it with and will make an appropriately corny joke. 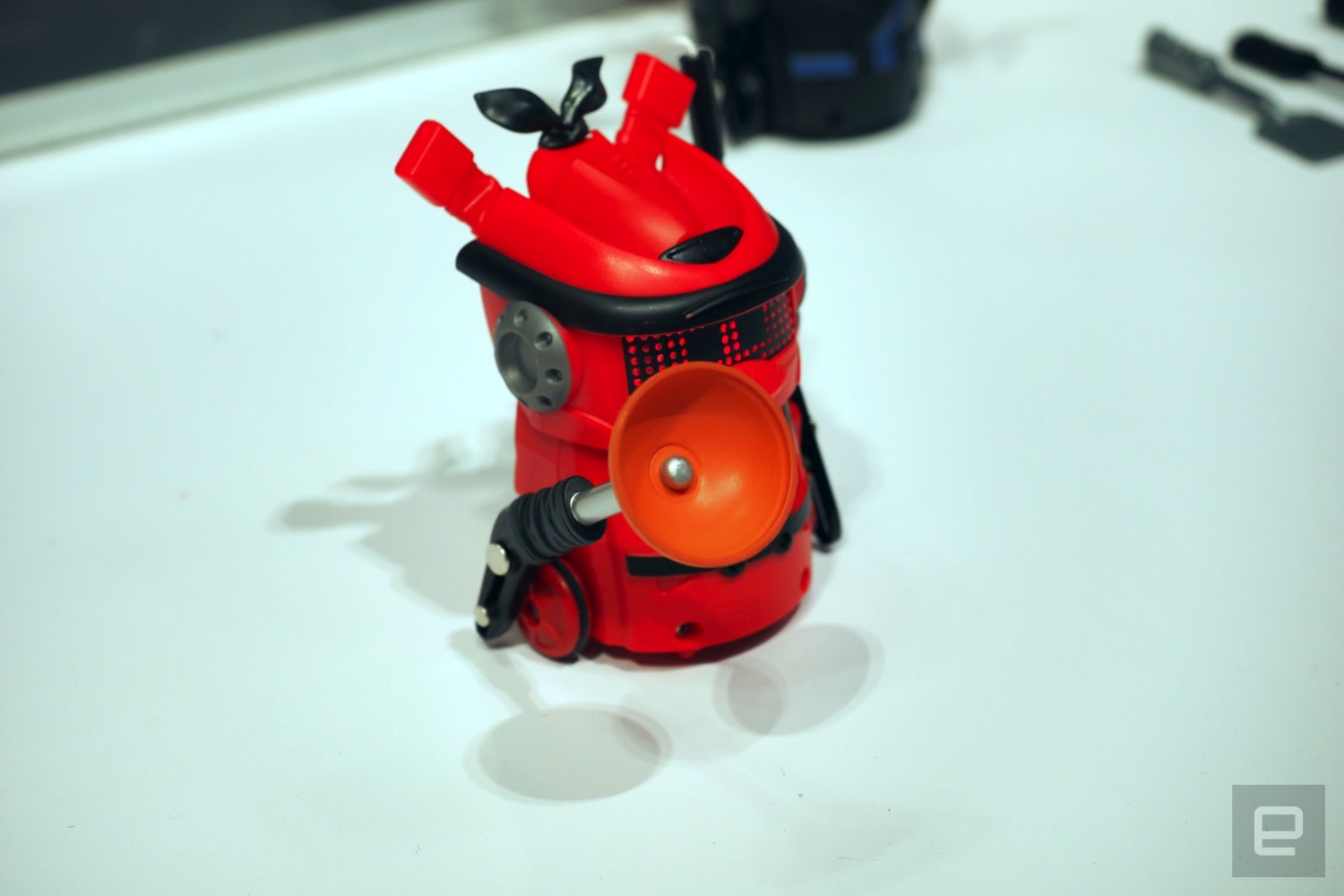 But it isn't completely autonomous. When you first turn the NinjaBot on, it'll ask what level you want it to fight at, as well as what fighting style you'd like it to use. You tell the robot what you want by karate chopping across its field of vision. The NinjaBot starts off as a white belt and levels up the more it fights, eventually working its way up to a black belt. It doesn't always need another robot to battle against, either — there's a training dummy that it's all too happy to beat up, with a head that can pop right off if hit hard enough.

At $30 a pop you might be utilizing that single player mode a lot, though I can see kids getting together to have their robots duke it out on the playground when the NinjaBots arrive on August 1.

In this article: entertainment, gadgetry, gadgets, ninjabots, robots, spin master, toy, toy fair, toy fair 2020, toyfair2020, toys
All products recommended by Engadget are selected by our editorial team, independent of our parent company. Some of our stories include affiliate links. If you buy something through one of these links, we may earn an affiliate commission.