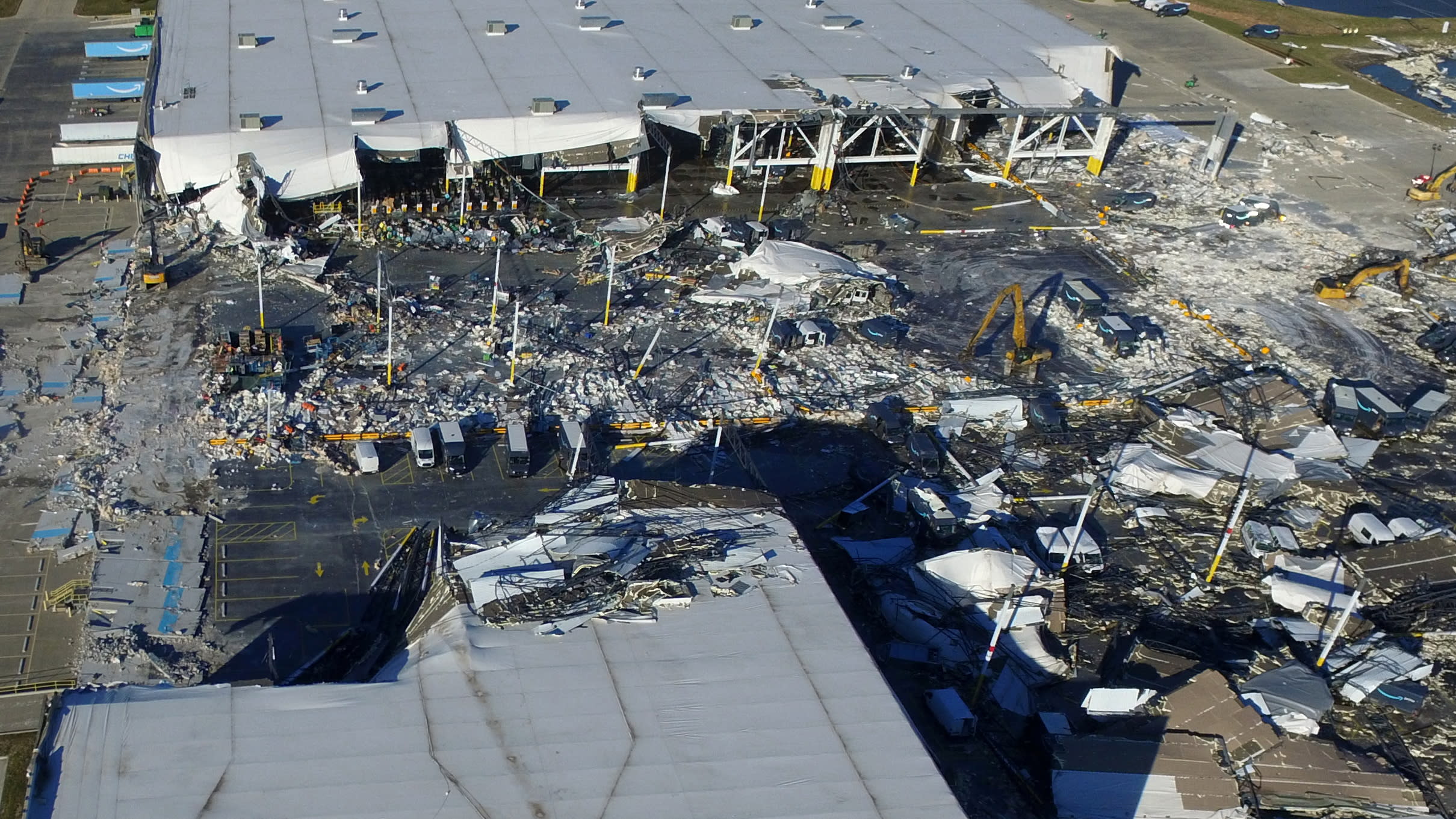 The site of a roof collapse at an Amazon.com distribution centre a day after a series of tornadoes dealt a blow to several U.S. states, in Edwardsville, Illinois, U.S. December 11, 2021. REUTERS/Drone Base Dronebase Dronebase / reuters

The company can't control the weather, but it can adjust its expectations.

Tornadoes ripped through six states on Friday, killing dozens. Among the dead were six workers at an Amazon warehouse in Edwardsville, IL, which collapsed while they sheltered inside. The incident is now the subject of an OSHA investigation.

The mass casualty event is likely Kentucky's "deadliest tornado system in state history," according to ABC. The twisters also touched down in December, well outside the normal tornado season. While this may have been an unusually extreme weather event for many reasons, Amazon's decision to schedule its workers during potentially deadly conditions isn't. Reportedly, at the time the cyclone touched down in warehouse's parking lot — producing winds estimated at 155 miles per hour — the facility was not only operating, but undergoing a shift change.

Amazon operates a staggering number of fulfillment, sortation and delivery centers across the country, and as a result, some of them are bound to be taken by surprise by the forces of nature. Excessive snow on the roof of one warehouse in Pennsylvania resulted in an evacuation when workers noticed it buckling. Two contractors were killed by a collapsing wall when a tornado touched down without warning in Baltimore.

But the National Weather Service had been warning of possible tornadoes 36 hours ahead of the deaths in Edwardsville; the morning before the storms it cautioned of the "likely threat" of "damaging winds in excess of 60 mph." Edwardsville is in what FEMA categorizes as Wind Zone IV, the part of the country at the greatest risk of tornadoes.

Amazon is perhaps better known in media coverage for its punishing productivity goals. But its operating standards have produced a pattern of incidents where workers were expected to clock in during extreme weather events. Warehouses stayed open during tropical depression Ida in September, the torrential rains of which caused widespread flooding and led to 14 deaths in New York. Some of Amazon's drivers told me they were delivering packages through the floodwaters of hurricane Irma back in 2017.

The Camp Fire of 2018 was the deadliest and costliest wildfire in California's history. Smoke from the destruction also briefly made Sacramento the most polluted city on earth. Despite air quality warnings being issued for the city on November 8th, an Amazon warehouse there did not send its workers home until the afternoon of the 10th.

By far, however, the most pervasive issue across Amazon's warehouses has been extreme heat. Workers in the Pacific Northwest were expected to report for duty during a historic heatwave this past summer which was eventually deemed a mass casualty event. Specifically, a worker complained that some areas of a warehouse in Kent lacked fans, and estimated temperature inside hit 90 degrees. New York warehouse workers also reported fainting and excessive heat around the same time. In May of this year, excessive heat led to a death inside the company's Bessemer, Alabama warehouse.

These are only some of the most recent examples. Workers have been lodging similar complaints for at least a decade about dangerous temperatures inside Amazon's facilities in Chicago, Portland and Pennsylvania's Lehigh Valley, among others. Even when immediate symptoms like fainting, vomiting or heat stroke are not present, long term heat exposure can exacerbate existing health problems such as heart conditions and asthma.

None of this speaks to criticisms of Amazon's safety measures related to COVID-19, or its objectively sky-high injury rate compared to other warehousing operations.

What's concerning is that, according to the overwhelming majority of the scientific community, severe winds, rain and heat are likely to get worse due to man-made climate change. Amazon, however, has not offered a satisfactory explanation for why it continues to schedule shifts during potentially deadly weather, nor would it provide Engadget with any details of the extreme weather plan in effect at the Edwardsville facility.

“We’re deeply saddened by the news that members of our Amazon family passed away as a result of the storm in Edwardsville, IL," an Amazon spokesperson told Engadget. "Our thoughts and prayers are with the victims, their loved ones, and everyone impacted by the tornado. We also want to thank all the first responders for their ongoing efforts on scene. We’re continuing to provide support to our employees and partners in the area.”

If you're an employee or contractor for Amazon and would like to discuss workplace issues confidentially, you can reach me on Signal at 646.983.9846