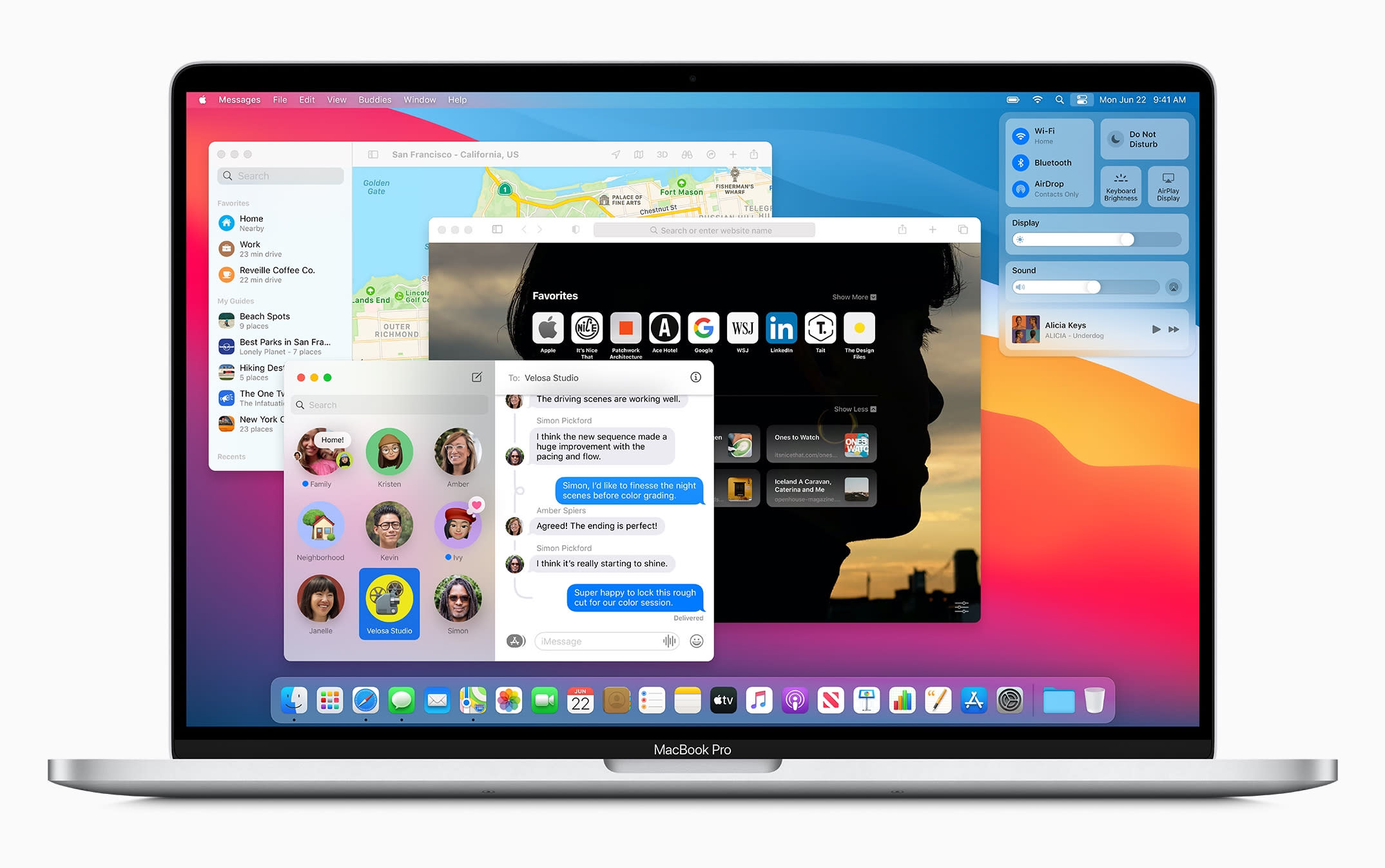 Apple first introduced macOS Big Sur back in June, lauding it with all the usual flowery language. The OS ushers in a new design language, which Apple’s SVP of software Craig Federighi described at the time as “the biggest change since the introduction of MacOS X,” way back in 2001. But the update isn’t just about aesthetics. Some of the most important built-in Mac apps like Messages and Safari are getting major upgrades, while new UI elements like Control Center and a revamped notifications area promise to make some common tasks more efficient.

That all sounded great when Apple announced it, and I’m a sucker for a meaty software update, so I’ve been testing the public beta of macOS Big Sur for about two weeks now. While it’s not final software, there’s enough here for us to understand where Apple is taking the Mac over the next year. This isn’t a comprehensive review, but rather a rundown of the things that stood out to me as the most important right. Once the OS arrives in its final form, we’ll take another look. But for now, these are the five most important things I noticed while using Big Sur.

This is early release software, and as such you’ll probably run into some weird bugs or potential app compatibility. For example, Google’s Backup and Sync app crashed on launch every single time I tried to use it. I’m not worried; a developer as huge as Google should make sure these things are working before launch. But if you rely on that app, don’t install Big Sur. The rest of the experience has been pretty free of major bugs, though a few new features and apps aren’t quite fully baked yet, the redesigned Notification Center being first on my mind.

Fortunately, the installation was smooth. You just need to sign up for Apple’s beta program and download an installer that’ll walk you through the setup process. After that, it’s a 40-ish-minute wait, depending on your Mac. And make sure you back up your computer before going forward; just because the Big Sur beta has been mostly trouble-free for me, doesn’t mean you’ll be so lucky.

Apple may have been slightly exaggerating about the extent of its Big Sur redesign — but it’s certainly the most dramatic revamp since 2014’s OS X Yosemite. The essential UI elements remain largely unchanged, though. The menu bar, dock, Mission Control window viewer and Launchpad app launcher all work as they did before. But the whole look of the Mac just feels different. A big part of that is Apple’s choice of a brightly colored desktop wallpaper and a translucent menu bar. Right off the bat, those seemingly-minor tweaks make Big Sur feel like a new place.

Throughout, the changes run the gamut from significant to subtle. App windows have a gentle but more pronounced curve to their corners; the dock now “floats” at the bottom of the screen; sidebars span the full height of app windows; toolbar symbols have been revamped; and first-party apps have redesigned icons, all uniform squares with rounded corners. Even if you don’t use many of Apple’s built-in apps, the redesign is hard to miss.

I generally find these changes pleasing enough, though obviously that’s a matter of personal taste. What’s been most jarring to me is probably that toolbar buttons are now just floating symbols, like you might find in iOS. There’s no “border” showing where to click, though when you hover your mouse over there’s a gray shadow showing what is selected. Most importantly, these visual changes don’t change the fundamental Mac experience.

That said, Control Center represents a fairly significant change in how you manage your Mac. Like its iOS counterpart, Control Center on macOS groups a bunch of commonly used settings (e.g., WiFi, Bluetooth, Do Not Disturb) in one place. To see everything, just click the small “sliders” icon in the menu bar, up near the clock.

Previously, settings like Bluetooth and WiFi sat directly in the menu bar for easy access, but too many of these buttons made the menu bar feel cluttered very quickly. Now, you can pick items you want one-click access to and place them in the menu bar; the rest you can find in Control Center. This means that I only see what I want to see (like battery life and the clock), while settings I don’t adjust often (like WiFi and Bluetooth) remain hidden but still easily accessible.

Notification Center still sits in a pane that slides out from the right side of the screen, but now it’s one space for widgets and notifications. At first, it seemed like both things would get shortchanged. But if you have a lot of notifications to dig through, you can just hit the “show more” button and go through everything. The rest of the time, widgets are more accessible than they were before. As in iOS 14, Apple’s first-party widgets now come in multiple sizes too. No third-party widgets are enabled in the Big Sur beta (at least as of this writing), but I’m looking forward to seeing how other apps take advantage of the much-improved widget system.

Unfortunately, notifications themselves need some polish. That’s mostly because it’s not always obvious how to clear them. On some notifications, you can hover over them and get an X to remove them, but it’s buggy. Sometimes the X appears and disappears at random as you mouse over it, and sometimes it doesn’t show up at all. These are the kinds of bugs that’ll probably be ironed out before launch, but right now they’re a bit frustrating.

Safari’s details on tracking protection are interesting, but not actionable

As usual, Apple is promising a variety of performance improvements and new features for Safari. I can’t quite judge yet if it’s as fast as they say, or if the battery life improvements are real. But one thing that I do very much appreciate is Privacy Report. Next to the URL bar is a small shield symbol that you can click to find out what web-browsing trackers Safari detected on the page. Safari has had built-in tracking protection for a few years now, but that info is a lot more visible now.

The privacy-tracking drop-down can be expanded into a full view of everything tracker-related that Safari is blocking. It shows how many trackers it blocked in the last 30 days, the percentage of sites you visit using trackers, what the most contacted tracker is, and then the trackers on every site you’ve visited. It’s more information than most people probably need, but the transparency is pretty great, especially when this information is otherwise so hard to find. On the other hand, it isn’t terribly actionable information, it just pulls provides more granular information on what Safari does to protect your privacy online.

Messages should finally be on par with the iOS app, but it’s hard to tell just yet

Messages has become one of Apple’s killer apps and one of the best reasons for having multiple devices in Apple’s ecosystem. As such, Messages is probably one of the most important apps on the Mac for a lot of people, but it’s been lagging a bit behind its iOS counterpart for years. Between Big Sur and iOS 14, Messages is getting a handful of nice upgrades that should put the Mac and iOS versions at feature parity again.

That means that you’ll be able to send messages with effects like confetti and balloons, and you’ll have access to Memoji stickers and one-click GIF searches too. More useful are things like the ability to pin conversations to the top of the app, improved search, inline replies, and mentions. Unfortunately, a few of the most useful things like replies and mentions I haven’t been able to really test, because there aren’t many people I know out there running beta software to exchange messages with.  But there’s little doubt that the messaging situation on the Mac is getting better this year — pinned conversations, message reactions and easy GIF searches have already made using Messages on Big Sur better.