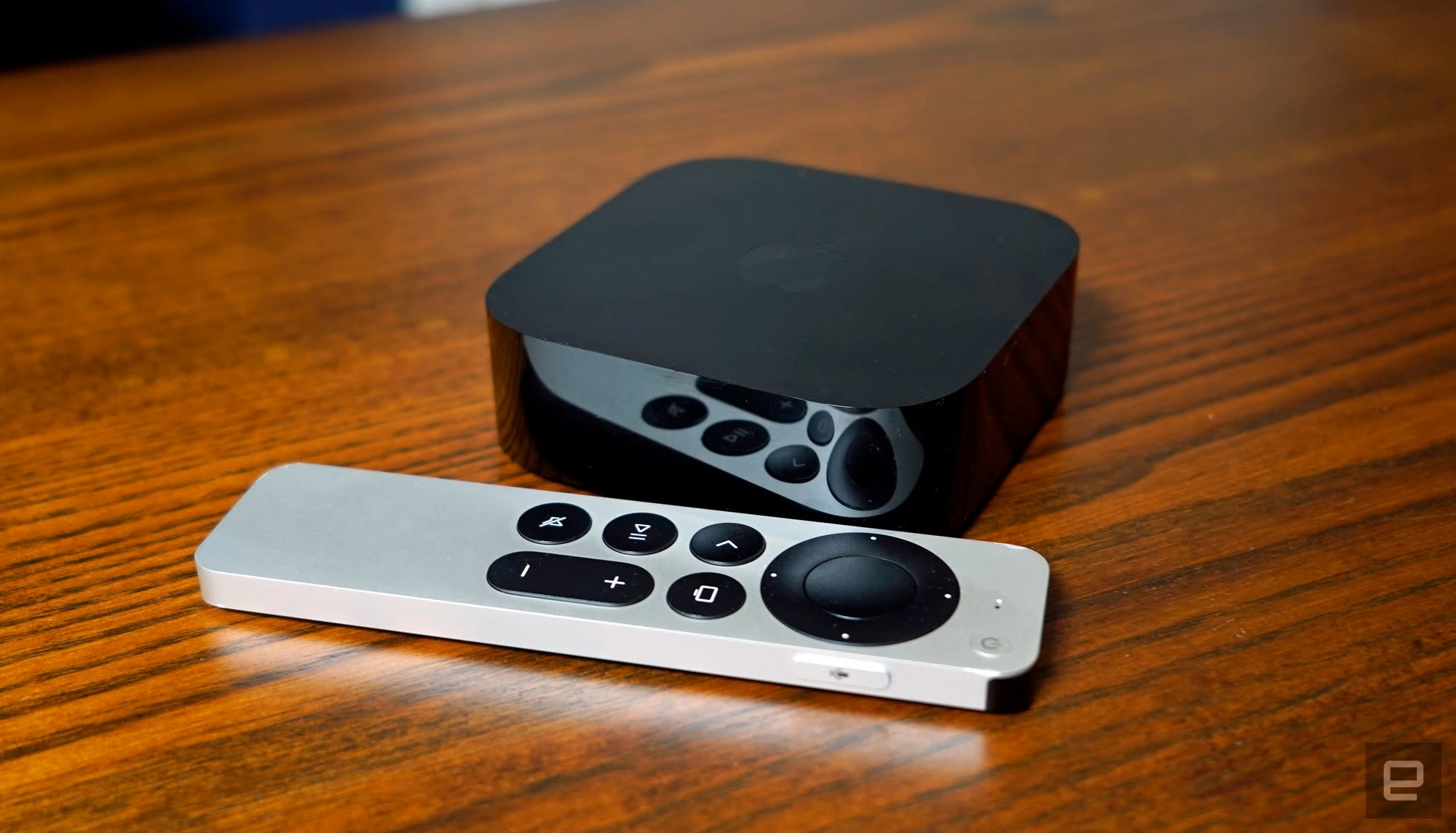 After Apple finally gave us a decent Siri remote last year, I couldn't imagine the Apple TV 4K getting much better. It's not like anyone is clamoring for an 8K upgrade – all we need these days is support for fast 4K streaming, as well as the multitude of HDR (high definition range) formats out there. The new Apple TV 4K can easily meet those demands, but what's truly impressive is that it's far faster than before and it's a lot cheaper at $129 (down from $179)! At last, there's an Apple TV I can recommend to anyone without hesitation.

Let's start with what's new: this year's Apple TV 4K is powered by an A15 Bionic chip, which launched with the iPhone 13 (and is still being used in the iPhone 14). That's a huge leap forward from the 2018-era A12 in the previous model. The new box also ships with 64GB of storage, instead of a meager 32GB. If you're planning to load up a ton of games and apps, there's also a 128GB model for $149, which adds an Ethernet port and support for the Thread internet-of-things protocol. Finally, Apple has integrated HDR10+ support, which works similar to Dolby Vision for delivering more accurate HDR in every scene.

At first glance, the Apple TV 4K looks the same as the previous models: a smooth black box with obscenely rounded corners. Peer a bit closer, though, and you'll notice it's actually smaller, like a prop rendering of its predecessor. Apple says it has 20 percent less volume than before, a result of losing the fan from previous models (this one runs silently) and being powered by more efficient hardware. Apple wouldn't say what, exactly, led to the dramatic price drop. But I'd bet it's down to simpler manufacturing, as well as a dip in component pricing across the board.

If you want to hear me wax poetic about Apple's Siri Remote, just check out my review of the last Apple TV. I'm still enamored with it a year later: It's easy to hold, has all of the basic functions you'd want, and it's far harder to lose than the previous super-thin remote. I'm still baffled why we were forced to use a glass-backed remote with a crummy touchpad on the original Apple TV 4K. Long live the new model and it's touch-sensitive, directional clickpad.

So sure, the hardware is great, but how's the software? Setting up the Apple TV 4K is now surprisingly easy, assuming you're already beholden to Apple's ecosystem. After plugging it in, I just had to tap my iPhone to the box to send over my WiFi and iCloud credentials. I chose to synchronize my home screens, which made all of the apps from my current Apple TV pop over. At that point, all I had to do was log into my usual streaming haunts, and I was ready to go.

After using every Apple TV the company has put out over the last decade, I had one immediate thought as I started using this new model: Holy hell this thing is fast. That's not to say the last version was slow, by any means. But there's a snappiness to this year's box that just feels freeing. I can swipe through all of the apps on my homescreen with ease, launch Netflix a few seconds faster than before, and drill through my library of movies without breaking a sweat. No more slight loading delays or pinwheels.

It could just be that I'm experiencing the rush of a brand new device, one uncluttered by a year's worth of use. But using the new Apple TV 4K feels like the difference between using an iPhone X and an iPhone 14 — everything just happens faster, with a greater sense of urgency. I found that most useful when I was flipping between apps and different videos. While I was catching up on Guillermo del Toro's Cabinet of Curiosities on Netflix, I could quickly hop over to check out my YouTube channels while my wife needed a bathroom break, and then resume the creepiness when she returned. Again, this is something I did frequently with the previous box, but now the Apple TV feels completely unencumbered.

Amid my speed viewing, I was also impressed to see that the Apple TV handles HDR 10+ without any issues. The opening chase in No Time to Die looked glorious, with excellent highlights in the brightly-lit European streets, but also solid shadow detail in darker scenes. That's the main appeal of HDR10+. Like the original HDR 10 standard, it delivers both brighter brights and darker darks. But, it can also adjust those settings based on the scene you're viewing, just like Dolby Vision. That avoids some issues commonly seen with HDR 10, where one HDR profile setting may not work well across a wide variety of scenes.

While testing the Apple TV 4K on Samsung's 55-inch Odyssey Ark monitor, I was also able to view Dolby Vision titles from iTunes via HDR10+. That feature is particularly useful on the Ark, since it doesn't support Dolby Vision on its own. You can expect HDR10+ to work across Apple TV+ offerings, as well as many titles available for rent or purchase. Amazon has also been pushing the standard for years, so you'll find native HDR10+ support across all of its originals. (It looked particularly great during the opening of The Peripheral.)

If you weren't a fan of the Apple TV's interface before, this new model won't change your mind. But as someone who has tested plenty of streaming devices, I still feel most at home with the Apple TV. I appreciate its wide variety of apps, its seamless integration with iOS devices, and the overall polish you don't see on Roku's software. Sure, you can use the Apple TV app on competing devices today (including Roku's!), but that's just a gateway to content. It's not the same as living with an elegantly designed streaming interface day-to-day.

Another plus? The Apple TV actually has games you may want to play .I was able to load up Sonic Racing in a few seconds, pair an Xbox controller, and start zooming around the track without much issue. The A15 Bionic should allow for smoother performance on more demanding games, but I've personally never seen anything stress these boxes much.

Perhaps my favorite aspect of the Apple TV this year: you don't have to pay as much of a premium to own it. At $129, it's a bit pricier than the $100 Roku Ultra, but in exchange you get a far more robust app platform and more features. The $149 model we reviewed is a smarter buy if you demand Ethernet, or would like to start using Thread IoT devices. (I didn't have any Thread-compatible hardware to test, unfortunately.) But even that model is a decent bit cheaper than the previous $179 Apple TV.

If you already bought last year's Apple TV 4K for its new Siri remote, this new box probably isn't worth the upgrade. But if you picked up an HDR10+ TV recently, it may be worth the step up, just so you're seeing the best HDR picture possible.

It’s taken a while, but Apple has finally managed to craft the ideal streaming box: one that’s relatively inexpensive, filled with modern features and fast. So damn fast.

All products recommended by Engadget are selected by our editorial team, independent of our parent company. Some of our stories include affiliate links. If you buy something through one of these links, we may earn an affiliate commission. All prices are correct at the time of publishing.
View All Comments
Apple TV 4K review (2022): Still the best streaming box by a long shot