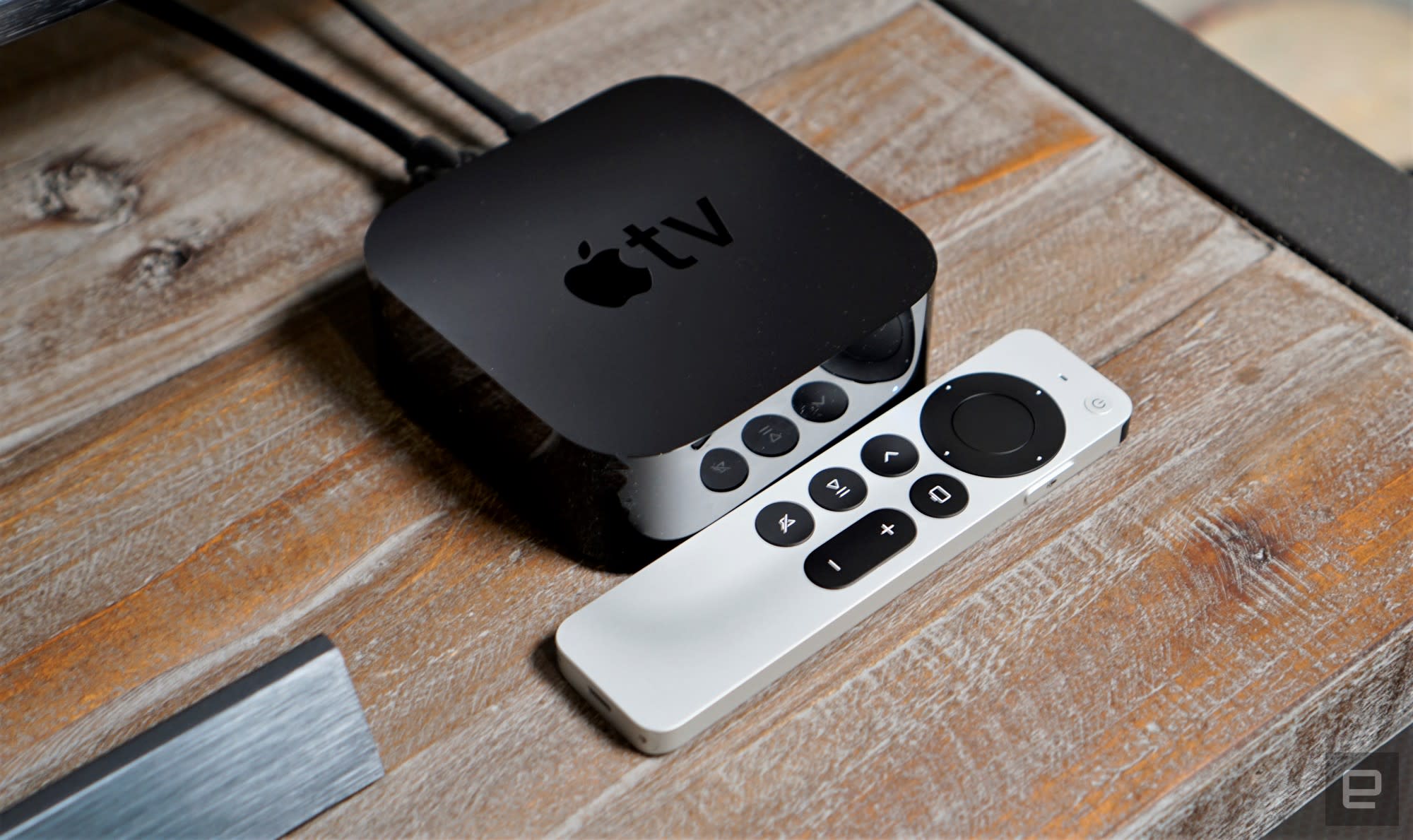 It’s not a huge upgrade, but it’s still the best streaming box around.

Let's get this out of the way up front: the new Apple TV 4K looks exactly like the last model, and it's a bit faster. But what really stands out is the new Siri remote, which is practically an apology for what came before. Instead of being elegantly thin and easy to lose, it's a bit chunky and easier to hold. Instead of an infuriating touchpad, there's a directional pad that also has touchpad capabilities. The new Siri remote is so good, I'd recommend that existing Apple TV 4K owners just buy it separately for $60 and skip the new box entirely.

For everyone else, though, is the revamped Apple TV 4K still worth a hefty premium over far cheaper streaming options? That's where things get complicated. The world of streaming video is a bit different now, compared to 2017 when Apple's last set-top arrived. For one, Apple offers its TV app on televisions, game consoles and even Roku's devices. That gives you full access to your iTunes library and Apple TV+. And if you still need some sort of streaming hardware, you can easily snag Roku's 4K stick with a voice-enabled remote for $40. So why, exactly, would you even think about giving Apple $179 (or $199) for something that hasn't changed much in years?

It all comes down to just how entrenched you are in Apple's ecosystem. I'll confess: even though I've tested out plenty of streaming boxes over the years, I've always come back to the Apple TV as my primary viewing device. I prefer the slick interface to Roku's dated UI. It had Dolby Vision when most others didn't. And, as an iPhone owner, I love having the ability to quickly AirPlay content, or mirror my screen. (Something that's now available on competing platforms, too.) Apple also won me over with its generous offer to upgrade HD iTunes purchases to 4K — that was particularly useful when Disney finally boosted its films to 4K last year.

The big downside before was the old Siri Remote, which was simply a pain to use. That’s why I’m so impressed by this revamp. The new Siri Remote feels practically anti-Apple. It's taller, thicker and its directional pad hearkens all the way back to the 2010 Apple TV's minimalist clicker. This isn't a company that often goes backwards design-wise. The revised Siri Remote is a sign that Apple that's finally responding to user complaints. Because of its bigger size and slightly curved aluminum case, it actually feels better to hold than the last model, which was just an incredibly thin and fragile rectangle. (Who puts glass on a remote? Only Apple!)

Based on my experience so far, that heft has also made it harder to lose the Siri Remote in my couch. Though that's definitely no excuse for not including AirTags, or some sort of remote finding feature, despite what one Apple exec thinks. On a brighter note, the revamped directional pad is a dream to use. It's perfect for making fine-tuned selections, like choosing between two movies or episodes listed near each other. But, it's also touch sensitive, allowing you to swipe around freely like on the last remote. And as a nice bonus, you can use the directional ring like a jog dial to scrub backwards and forwards in a video. That's reminiscent of the classic iPod scrollwheel, and it's far more accurate than just swiping left or right.

The layout is also more functional: a back button replaces the confusing "Menu" button, while the home, play/pause and unified volume controls all make a return. There's also a mute button up front, while the Siri voice controls are shoved over to the right side of the remote. That change kept throwing me for a loop at first, but after a few days I appreciated being able to activate voice commands without worrying about hitting any face buttons.

Apple also added a power button up top, allowing you to turn your TV on and off, as well as put the Apple TV to sleep. Unfortunately, since the TV power button relies on infrared, it couldn't actually control my TCL Roku TV, but that's a problem I have with most universal remotes. One other benefit of the new design: you can actually tell which way is up just by holding the remote.

I'd go as far to say that the new Siri Remote is a genuine selling point for the Apple TV. Given that Roku and Amazon haven't really innovated much with their remotes over the years, if you want something that feels new and fresh there aren’t many options. One downside is that you won’t be able to use the new remote as a game controller, as Apple removed the accelerometer and gyroscope. But I honestly can’t imagine actually playing anything using that old clicker.

So, if you can't tell, I really like the Siri Remote. But, overall, the new Apple TV 4K isn’t a dramatic departure from the 2017 model. Its A12 Bionic processor allows it to display Dolby Vision and HDR video at 60FPS, but that's not an upgrade most people will notice. Aside from some videos in the Red Bull app, there's simply not much high framerate Dolby Vision content out there. And the rare films that utilize that technology, like Ang Lee's Gemini Man, aren't available at their full framerate on iTunes.

Moving around the Apple TV interface and launching apps felt a bit quicker than the last model, but not noticeably so. Some of that zippiness could be due to its faster Wi-Fi 6 networking, but I didn't see any major speed bumps while actually loading videos. There's also the potential for the A12 Bionic to run games faster than the previous A10X Fusion chip, but I've yet to hear from any developers eager to tap into that new hardware. Since it supports HDMI 2.1, the Apple TV could technically hit 120Hz in the future as well. That could lead to smoother gameplay for some titles.

It's worth noting that the A12 Bionic is itself a bit old. It originally appeared in the iPhone XS in 2018. So, let me reiterate: If you already have the last Apple TV 4K, there's little need to get this new box.

For newcomers, though, the Apple TV interface is still pretty compelling. It's functionally the same as Amazon and Roku's — launching apps and choosing videos is pretty basic, after all — but there's an extra layer of polish that I appreciate. Think of it like the difference between Mac OSX and Windows XP in the 2000's. The Apple TV's grid icons look slicker, and I appreciate being able to hop back into a show or movie via the TV app. Multitasking is something Roku still can't do, whereas it's easy to hop between different apps and streams on the Apple TV. You can even throw videos into a picture-in-picture window as you navigate other apps.

Naturally, the Apple TV also makes plenty of sense for iPhone and iPad owners. Beyond AirPlay and screen mirroring, you can also use iOS alongside the Apple TV to type in text fields. That’s particularly useful if you've got long passwords, or if you store them on a password manager.

For the most part, streaming video on the Apple TV looks just as good as any other 4K/HDR streaming box. But Apple also takes a unique route to displaying high-dynamic range content: It forces your TV to always keep HDR on. That helps to reduce the annoying flicker that occurs whenever a TV switches between different dynamic range modes, but it could lead to some issues displaying older standard dynamic range content. On my TCL 8-series set, the Apple TV defaults to 4K Dolby Vision at 60Hz. I haven't noticed any issues while watching older sitcoms like Cheers and Frasier, but it's something many users have complained about over the years.

After plenty of complaints in 2017, Apple eventually offered the ability to automatically match the frame rate and dynamic range, instead of forcing HDR. But that doesn't work for every app, unfortunately. For now, I'd consider that an issue to look out for, but it's not necessarily a dealbreaker.

While you'd get more precise control of your video settings with a Roku Ultra, you'd also miss out on one of the Apple TV's biggest assets: Siri. On iPhones and iPads, Apple's virtual assistant sometimes has trouble keeping up with my commands. But on a more limited set-top box, where I just need to find something to watch, Siri ends up being far more useful than Roku or Amazon's offerings. Searching for shows and movies takes just a few seconds, and in general, the Siri Remote does a great job of hearing what I'm trying to say. Siri can also help you find new things to watch, or you can ask her to play the latest episode of whatever you’re bingeing.

You can also use the Apple TV as a HomeKit hub, allowing you to control things like smart lights when you're away from home. Personally, that's not something I've ended up using much, but I do love the ability to quickly view my Arlo security camera feeds. If I ask Siri to "show me the basement door," it gives me a clear view of that camera within seconds. Those videos pop up in PiP windows at first, but you can also maximize them to fill your TV screen. The new Apple TV also supports the Thread smart home standard, like the HomePod Mini, which lets you create a mesh IoT network with other devices. That's more about future-proofing though, as there aren't many Thread-enabled products yet.

At $179 for the 32GB model, and $199 for the 64GB version, the Apple TV still feels like a tough sell for many. That’s especially true when you consider that the Roku Ultra, that company’s most powerful device, typically costs $100 (and it’s on sale for $70 at the time of this review!). But there’s a reason I keep coming back: It’s easy to use, and there are a ton of benefits for iOS users. At the very least, I no longer have to make any excuses for the remote.