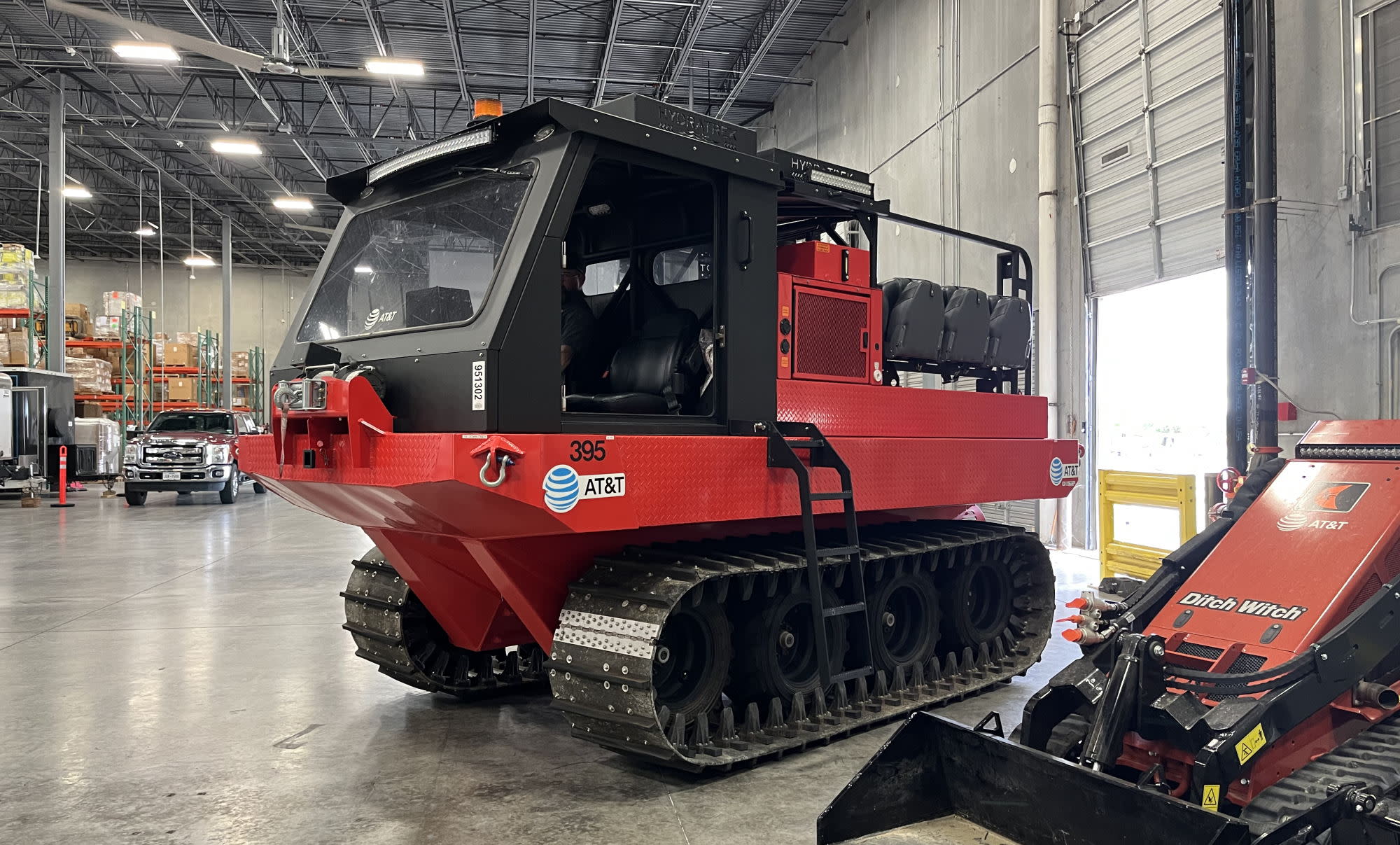 AT&T is using amphibious vehicles, drones and more to restore its network during disasters

Its Network Disaster Recovery team is even considering robot dogs for tough terrain.

In a nondescript warehouse outside of Atlanta, nestled among the office parks and chain restaurants that pepper suburban America, AT&T is preparing for catastrophe. This is one of the company's Network Disaster Recovery (NDR) sites, a place where a volunteer group of AT&T workers can test and train on equipment that can quickly spin up connectivity when a local office is destroyed.

Longtime Engadget readers may remember our 2008 visit to a similar Chicago-area site, only a year after the launch of the iPhone and long before the company started deploying 4G LTE. Given just how much the world has changed since then — with smartphones in practically every pocket, and billion-dollar weather and climate disasters on the rise.

Originally launched in 1991, AT&T has spent over $650 million in the US building up the NDR program (up $100 million since 2008). Since 2017, AT&T has also provided network support for FirstNet (First Responder Network Authority), which delivers a public safety wireless network throughout America. Both T-Mobile and Verizon have their own disaster response initiatives, but AT&T’s cellular division has the advantage of launching more than a decade before either of those competitors arrived in the US. Neither company has publicly stated how much they invest in disaster recovery, and our inquiries for more specifics have gone unanswered.

It’s one thing for AT&T to claim it’s spending a huge chunk of change on disaster recovery (the cynic in me can’t help but wonder how that figure is calculated). But seeing the vast amounts of gear the company has devoted to its NDR program makes one thing clear: This is more than just good PR. It’s a moral mission for AT&T’s volunteer staff, many of which come from military backgrounds. While it’s not as mission critical as supplying food, water and shelter, providing connectivity could still save lives by making it easier for first responders to communicate with each other, not to mention giving people in danger a way to reach out for help.

During our 2008 visit, we learned the NDR team was using a standard Chevy Suburban jam-packed with cellular gear to restore parts of its network. Today, they’re looking to the sky and beyond. (That Suburban has also been replaced by a 4x4 emergency response club cab pickup.) AT&T has been using drones called Flying COWs (Cell-on-wings) for several years, but its upcoming iteration can spit out 5G coverage to around ten square miles from 300 feet in the air, while the drones currently being used deliver Band 14 LTE.

For safety reasons, all of the company's drones are currently tethered to stations on the ground, which provide power for as long as their generators can stay fueled. They also require two people to operate — one to fly the drone, and another to keep an eye out for obstacles. The drone I saw looked larger than any consumer model I've seen, and it can hold a payload up to five pounds.

Looking ahead, AT&T has patented a remote flight system that lets operators control drones from thousands of miles away, and it's exploring solar-powered units that could fly autonomously for days. (Unfortunately, I didn't get to see AT&T's 55-foot long blimp, which flies 1,000 feet in the air to provide connectivity across 100 miles for up to two weeks.) NDR staffers tell me AT&T is also testing robodogs that can deal with a variety of scenarios – from running up a mountain during a forest fire, to helping with bomb disarmament.

The company has also beefed up its ground and water game with the Amphib. With its enormous treads, it looks like a red mini-tank, but it can also float and make its way through water using rear propellers. It's the sort of vehicle that can make dealing with hurricanes much easier, according to AT&T's Kelly Morrison, who is also a longtime NDR volunteer. The Amphib is basically a people and payload mover, but it gives the company more flexibility when dealing with flooded areas. Given the historic rainfalls we've recently seen in St. Louis and Kentucky, in addition to inevitable rising sea levels, the Amphib could end up being one of the NDR team's most useful tools.

Of course, these new toys are great and all, but the core of AT&T'S NDR team continues to be its COLTs (Cell on Light Truck). They can tap into the company's existing fiber backhaul lines and deliver cellular connectivity within a few hours. If local infrastructure is completely down, AT&T can use SatCOLTs to reach satellites instead. And for hard-to-access areas, the company now has "Compact Rapid Deployables" (CRDs), which can fit on the back of a truck or be hiked to the top of a mountain. The company also has thousands of generators on-hand – a necessity for every disaster site. While the main goal is to restore connectivity for first responders and customers, AT&T’s FirstNet commitment also ensures interoperability with competing carriers too.

During the devastating Marshall Fire in Colorado, which destroyed more than 1,000 homes, FirstNet responders rushed to set up two SatCOLT's over New Year's Eve. Additional teams came in from Kansas, Texas, New Mexico and Missouri, leading to a peak of eight SatCOLTs being used to support FirstNet works and local businesses. The fire wasn't the only challenge: Additional calls required a team to cover two mountain passes during heavy snow conditions.

The NDR team hasn't gotten many breaks throughout the year. According to AT&T, three SatCOLTs helped first responders during Yosemite's wildfire in July. And as of August 1st, FirstNET also deployed another two SatCOLTs to assist rescue operations during the recent flood in Kentucky. The team has been deployed more often since 2018, when AT&T was tapped to support FirstNet, and it’s also responding to the increasing number of wildfires we’re seeing in the US.

And, of course, NDR workers are always keeping an eye on new ways to improve their disaster response. The team tells us they're looking forward to using low-Earth satellites eventually, which would offer more bandwidth and lower latency than the existing fixed satellites. Virtualizing their work would also be a huge help. Currently, much of their response involves moving workers and setting up control centers in dangerous areas. But as they move towards smaller and easier to deploy assets, like drones and CRDs, they may not have to set up a trailer at all.

After my tour of the NDR site, I couldn’t help but notice the cellular equipment dotting the sparse Georgia landscape. I could see towers at practically every high point in the area, delivering robust 5G speeds on the same roads where I used to struggle to get 2.5G Edge reception over a decade ago. It’s easy to take this blanket of connectivity for granted. And now that we’re starting to see more frequent extreme weather events, it’s clear that AT&T’s NDR team, and similar initiatives from competitors, will be more necessary than ever.