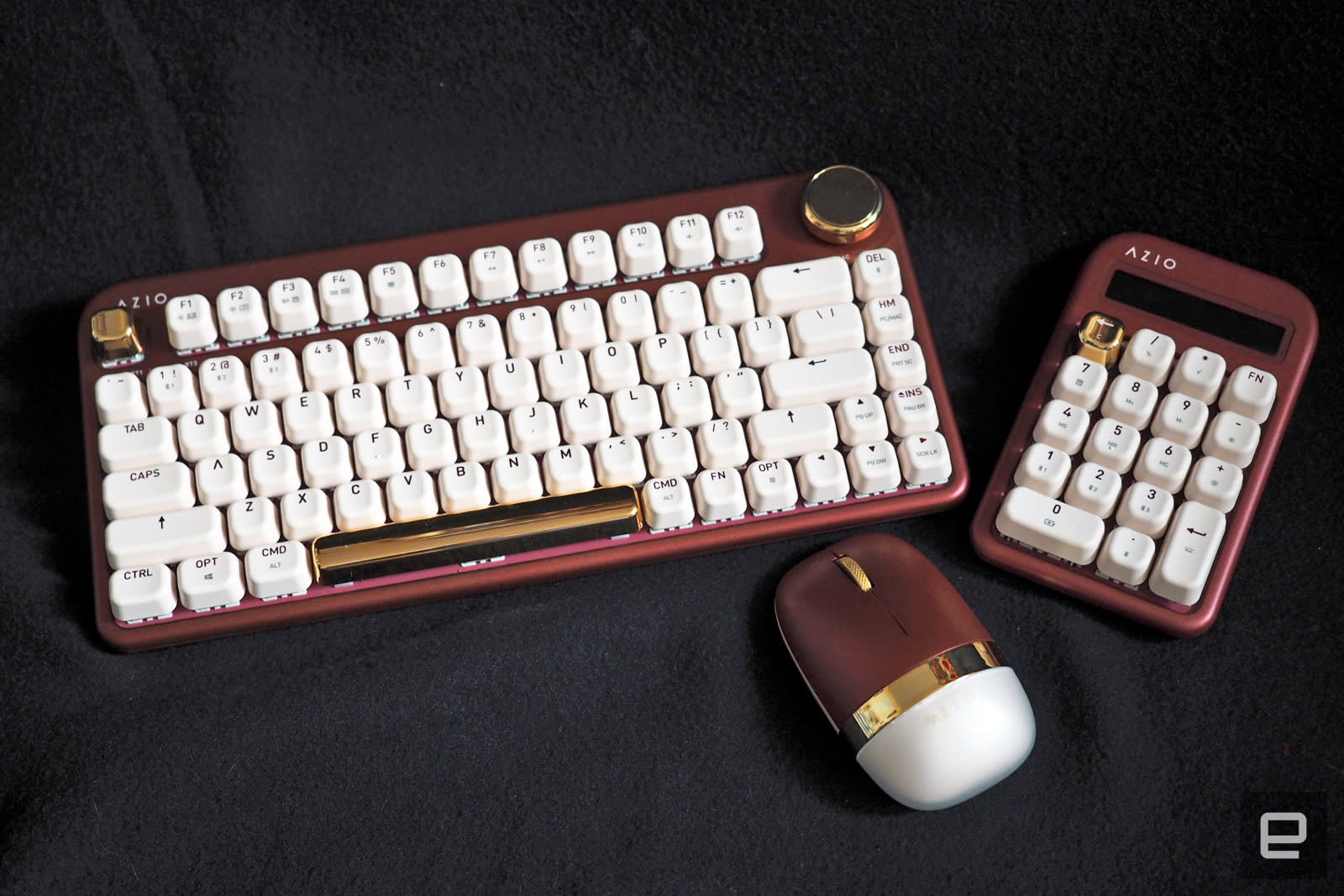 It’s supposed to be ergonomic, but my hands beg to differ.

With tech pretty much everywhere in our lives these days, some people would prefer it matched their personal style and decor. But sometimes practicality gets left behind, resulting in products that look good but don’t work so well. Here at Engadget, for example, we’ve tested a few fancy keyboards that didn’t offer the best typing experience. But despite our misgivings, these “fashion” keyboards continue to be popular with social media influencers. AZIO’s new IZO collection, out this summer, tries to be both fashion forward and functional, and it succeeds — to a point.

The collection has three main components, all of them wireless: a $140 mechanical keyboard; a $70 number pad that also functions as a standalone calculator; and a $50 mouse. There’s also a matching wrist rest and desk pad. The items are sold separately, and you can snag them in either white, blue or pink. I opted to receive my review units in “baroque rose” because it really is a nice shade of pink, in contrast to the bubble gum shades favored by companies like Razer.

Regardless of which color you choose, each accessory is embellished with gold accents The keyboard, media dial, escape key and spacebar are all gilded and glossy. They stand out against the matte plastic used on the rest of the deck, and not in a good way. I also suspect that after several months of use, the coating is going to wear away and it’s not going to be pretty.

The keys are squircle shaped and lightly textured, so they at least feel nice to the touch. The typing… isn’t horrible. It’s actually perfectly fine, with good tactile bounce and a soft click with every press. But despite the blue mechanical switches it still feels a bit spongy compared to the other decks I have here in my office. I’m typing this hands-on with the IZO and it’s fine, but given a choice I’d switch back to my standards in a heartbeat. The IZO feels like a toy, which is disconcerting when I’m here to work. It’s a tenkeyless deck, which makes it great for tight spaces and taking on the go, though I wouldn’t slip it in my bag for fear of scratching it up.

If you need a number pad, that’ll cost extra. Seventy dollars is kind of steep for those 18 extra keys, and the fact that it can also be used as a calculator doesn’t make the cost sting any less.I will say this for it, though: I love this thing. Not because I use the number pad to do calculations (though I do), but because it’s just so fun to play with. I don’t have it connected or even turned on right now, I just like to randomly pick it up in both hands and play with the buttons. I may find the typing experience a little subpar, but as a fidget toy the numpad is great because it’s just so chunky and clicky, perfect for keeping my hands busy during boring Zoom calls.

The final piece of the set is the wireless mouse, the most beautiful of the three desk accessories. It’s a rounded rectangular shape, with a gold scroll wheel and stripe across the middle of the mouse, below which is a frosted white plastic bearing the AZIO logo. This is the kind of mouse that could strut around Milan Fashion Week or the beach at Ibiza. Unfortunately, it’s pretty bad as a computing accessory.

It’s the hand feel that’s an immediate turnoff. Where most mice curve inward and down on the end facing the user, the better to fit in your palm, the AZIO mouse is straight all the way down, with the rear of the mouse at the same height as the middle. It’s actually one of the smallest mice I’ve tested, but it feels huge in my hand. That’s a big no-no considering it’s a fashion peripheral, presumably meant to appeal to women, who usually have smaller mitts than men.

The design faux pas don’t end there, either. The DPI button is placed on the bottom of the mouse and it’s a tiny little nub that’s hard to hit, so once you’ve picked a setting you’ll probably want to stick with it. And the pads on bottom have a little too much friction on them to slide across my desk easily. I probably should use a mouse pad with this thing but I haven’t needed one in almost a decade and I don’t see why I should go back now.

I wouldn’t recommend the mouse and the cost of the number pad is a bit too steep for me to tell you to buy it — even at the currently discounted price of $40. The keyboard is also on sale for $80, which is a little more tempting. But if the color was your main reason for buying it, note that Logitech’s K380 comes in a fetching pale pink, can connect to up to three devices wirelessly and is only $40. You also have your choice of mice to match, including the stellar MX Anywhere 3. The IZO collection is for people who absolutely need to have a stylish mechanical keyboard — and even then, you might be better off just buying a white deck from a company like Corsair and customizing the LEDs to your favorite shade.