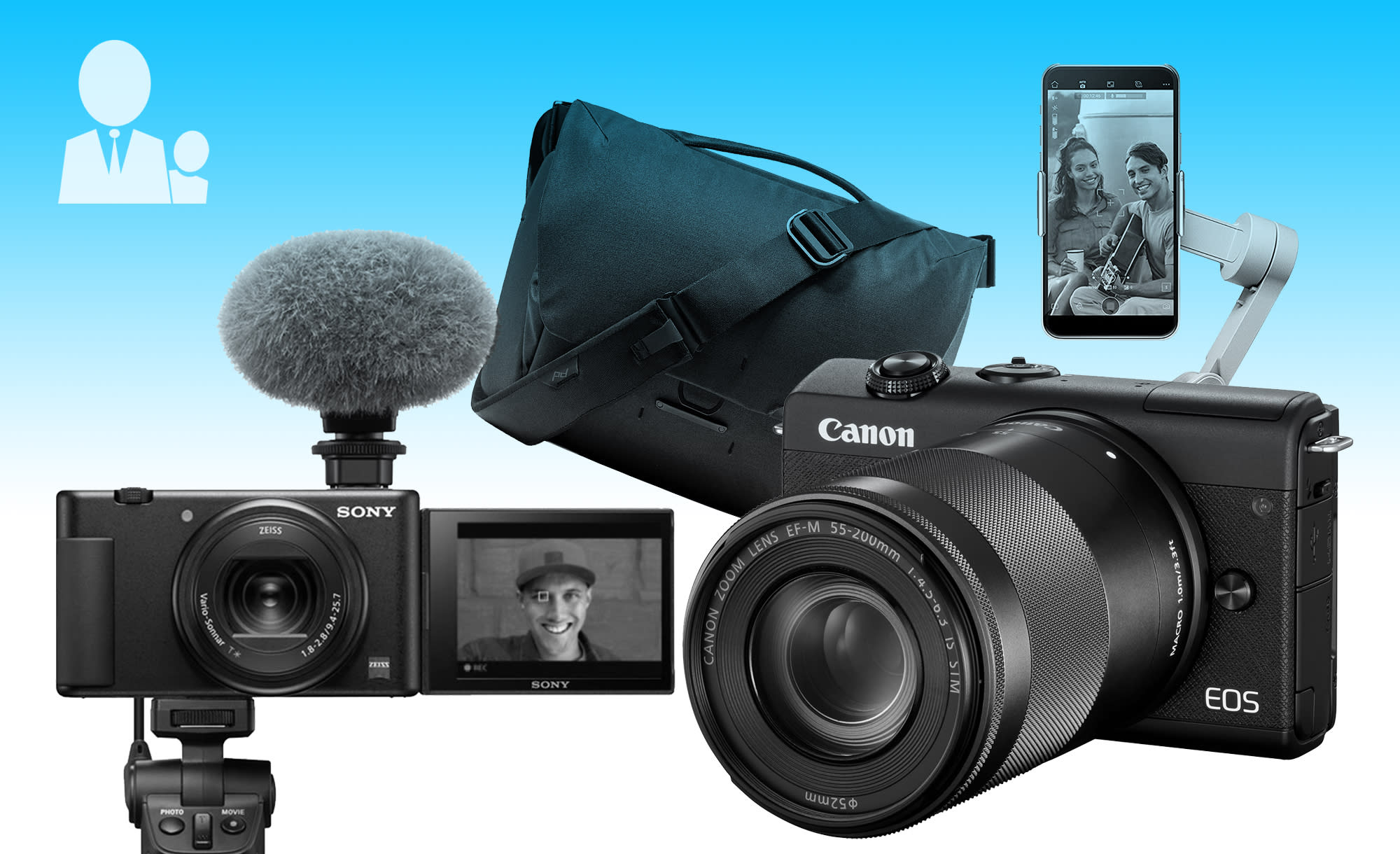 The best camera and photography gift ideas for dad

S. Dent
@stevetdent
June 4th, 2021
In this article: magnus, thebuyersguide, joby, fujifilm, sandisk, gear, peak design, canon, feature, dji, commerce, fathersdaygg2021, gopro, sony, streamshopping
All products recommended by Engadget are selected by our editorial team, independent of our parent company. Some of our stories include affiliate links. If you buy something through one of these links, we may earn an affiliate commission.

When your dad decides to take his photography game to a new level, a smartphone may no longer be enough. Some may want a sports camera to capture their adventures while others may need a mirrorless camera for better family photos, films or artistic shots. Thanks to the rapidly advancing technology, they keep getting better with faster shooting speeds, sharper video and incredible autofocus. We found five of the best models for budgets ranging from $350 to $2,500, along with some accessories to complement the gear your old man already owns.

If your dad would rather star in his own sports adventures than watch them on TV, the Hero 9 Black is the camera he needs. It bests the previous Hero 8 black in a number of ways, particularly the addition of a front camera. That makes it a lot easier to frame yourself in the action for mountain biking, skating and other activities. GoPro also introduced 20-megapixel photos and 5K 30fps (or 4K 60 fps) video, giving your dad more options for cropping, framing and slow-mo. Meanwhile, it has improved some popular tools like Hypersmooth 3.0, while boosting battery life. Best off, it can be yours for $350 with one-year GoPro subscription — a discount of $50 off the regular price without a subscription.

So your dad is taking up photography? An entry-level camera is a good way to start out, and the best one out there is Canon’s EOS M200. With a 24-megapixel sensor and Canon’s skin-friendly colors, it delivers great photos. They’re also easy to capture thanks to an intuitive smartphone-like interface, fast autofocus speeds and great eye-detection performance. He’ll also be able to shoot 4K 24p video (albeit with a 1.6 times crop), along with full-sensor 1080p at 60 fps. And it’s available for significantly less than most other mirrorless cameras at $549, complete with an EF-M 15-45mm kit lens.

Sony cameras generally make great gifts and the best value right now is the A6100. It features class-leading autofocus and eye-tracking performance for humans and animals, ensuring your sharp shots, even with fast moving subjects. Sony has also improved the color science and low-light capabilities, so family photos will be sharp and color accurate, even in dimly lit environments. The drawbacks are bad rolling shutter that can cause video wobble and a low-resolution electronic viewfinder. Still, for $748 (body only) the A6100 is the best mirrorless camera in its price range.

Fujifilm’s X-T4 is the best crop-sensor camera on the market, making it a desirable gift for any lucky father. It’s notably improved over the X-T3 with the addition of in-body stabilization and a fully articulating screen. At the same time, it has the best video features for an APS-C camera, with sharp 4K video at up to 60 fps, along with 1080p at 240 fps. Both photo and video quality are outstanding, with great skin tones second only to Canon’s models. But the autofocus, with tracking and eye-detection, is good but not quite up to Sony’s standards. And while the generous manual controls deliver great handling, it’s less compact than before. It’s not cheap at $1,700, but it can hold its own against far more expensive full-frame cameras.

For dads who can’t decide between photos and video, Canon’s EOS R6 does both things well. The 20-megapixel sensor lacks resolution compared to rivals, but it offers killer specs like in-body stabilization and Canon’s fast and accurate Dual Pixel autofocus for video and photos, along with sharp 4K video at up to 60 fps. Other features include a flip-out display, relatively compact size and skin tones that will flatter your dad’s subjects (you, possibly). It does suffer from overheating issues with video, but that’s only likely to affect pros who shoot for long stretches at a time. Overall, it’s currently our best pick for under $2,500.

Smartphone stabilizers are fine, but nothing tops a gimbal for tracking shots. The best deal out there for mobile devices is DJI’s OM4, ideal for your dad if he’s tired of jerky tracking shots. While previous models used a clamp, this model rocks a magnetic mount system that makes attaching your phone faster and easier. It also adds new features like “dynamic zoom” and “spin shot” that will give your dad a new repertoire of moves. As with other DJI gimbals, it delivers smooth, reliable performance and has a solid app that’s easy to use. It’s also relatively affordable: You can grab one now with a grip and tripod for $149.

With its rugged, practical design, Peak Design’s Everyday Messenger Bag is an ideal gift for adventurous or photo-shooting dads. It’s built with a lightweight yet durable 100-percent waterproof recycled 400D shell with the ingenious Flexfold dividers in the main storage area. It also offers a pair of zipped pockets, two elastic side pockets and a compartment big enough for a 13- to 15-inch laptop. I own one myself and find it practical both for work and daily activities, letting me fit a camera, lens and laptop along with my wallet and keys. At $220 it’s not the cheapest bag out there, but your dad won’t have to buy another for a good while.

For dads serious about video, the Magnus VT 4000 is the best budget tripod option. It’s stout enough to handle a mirrorless camera and accessories weighing up to 8.8 pounds, more than the eight-pound weight of the tripod itself. That lack of heft makes it practical for travel, while the fluid head helps you tilt and pan smoothly. Other features include a middle spreader to keep things steady and legs that extend up to 64 inches so you can match the eyeline of your subjects. All of these features come for $160, a relative steal considering the quality.

The most useful accessories out there for vlogging dads are Joby’s famous mini-tripods, and the best one for the money is the GorillaPod 3K. Attaching your camera couldn’t be easier thanks to the secure clip-in mounting plate with a built-in level. The flexible also lets let you set your camera anywhere to shoot, or even wrap it around a tree or other object. And, of course, you can bend them out for the ideal vlogging angle and steady out your shooting, to boot. It's $45 at Amazon right now, a bargain for such a versatile tool.

Camera-loving dads can never get enough memory cards, but they can be a pretty pricey gift. One of the best budget options is SanDisk’s ExtremePro UHS-I SD cards. While they don’t offer the top 300 MB/s speeds of UHS-II cards, they’re far cheaper, and the 90 MB/s read/write speeds are fast enough for most types of photography and video. What’s more, you can transfer files at speeds up to 170 MB/s with a compatible reader, and SanDisk is known for producing reliable cards. SanDisk has models for all budgets, with the 256GB version in the sweet spot at just $60. If that’s too much, the 128GB version is $33 and the 64GB model a mere $18.

The best camping and backpacking gear for dads

The best camera and photography gift ideas for dad