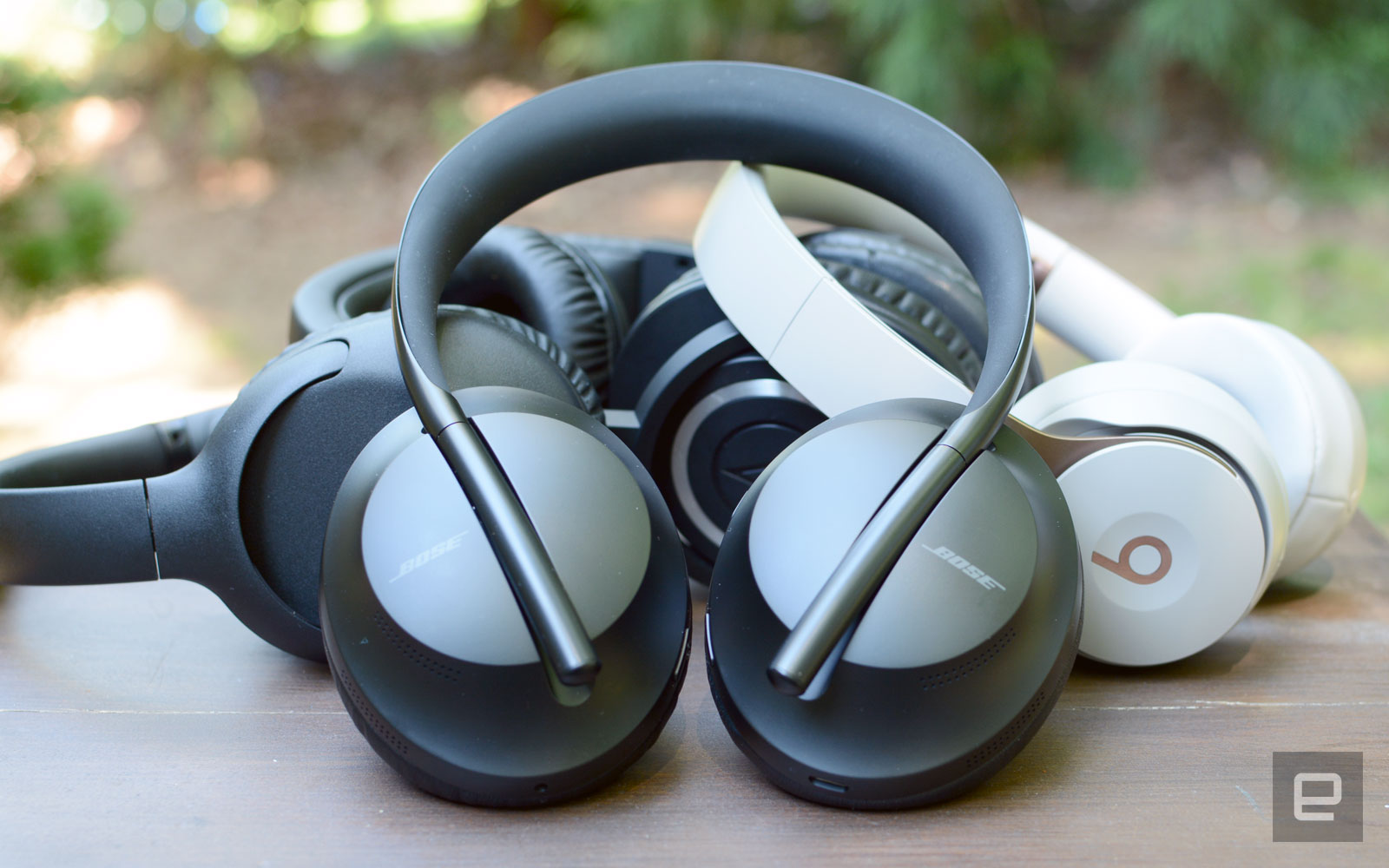 When it comes to wireless headphones, the over-ear noise-cancelling models typically offer the most comprehensive set of features we want. The best options combine stellar audio with powerful active noise cancellation (ANC) and other handy tools to create as complete a package as possible. Of course, some companies do this better than others. For this guide, we’ll focus primarily on the over-ear style (with one exception) and offer a range of prices so you can decide how much you’re comfortable spending.

Nearly two years after the introduction of the WH-1000XM3, Sony gave us a successor. The $350 WH-1000XM4 look a lot like its older sibling, but small design tweaks give the headphones a more premium look and a more comfortable fit. Just like the M3 though, the bulk of the upgrades are inside. Most importantly, the M4 allow you to connect to two devices simultaneously -- a key feature that was missing from previous generations.

Sony also added wear detection, which automatically pauses playback when you take the headphones off, and a Speak-to-Chat feature, which automatically pauses audio and activates ambient sound when you start talking. Like other recent Sony headphones, the Adaptive Sound Control profiles will now turn on your customized ANC presets based on location -- if you allow the app permission to track your movements. Sony tweaked the algorithm for its QN1 noise-canceling chip to make it more effective and the company’s new DSEE Extreme digital sound processing (DSP) technology upscales audio more efficiently. With all the new features (some of which are a bit overdue), Sony has made its flagship headphones even better.

Bose hasn’t been our top pick for a while, but that doesn’t mean the company isn’t still making good audio gear. Last year, it launched the Bose 700: a new take on noise-cancelling headphones that has less of that “dad on a business trip” vibe. The company was clear that these aren’t replacing the popular QuietComfort line but rather serve as an alternative to those comfy, quiet headphones.

Bose nailed the ANC and touch controls on the 700. However, the company didn’t include custom EQ options or sound presets inside its app. Because the treble can be harsh at times, this is a little disappointing. The 700 is more expensive than the WF-1000XM3, which is another reason that kept Bose from retaking the top spot in our picks.

Audio-Technica’s M50 headphones are a popular choice among DJs and producers for their accurate response and comfy fit. The company debuted a wireless version in 2018 that offers the same design without the need for a cord. There’s no ANC here, but there’s sublime sound quality. A-T headphones have great clarity and warmth to the tone, which makes them a solid choice for a range of genres. In fact, these are actually my favorite headphones on this list in terms of audio quality.

Despite the lack of active noise cancellation, you still get a host of handy features. Things like onboard controls and up to 40 hours of battery life top the spec sheet. The M50xBT also has the 90-degree swiveling earcups from its predecessors, which allow the headphones to both lay flat and fold in on themselves for storage. Plus, these are very affordable (at least, for quality wireless headphones) at $180. If you don’t find yourself in noisy spots often, these are certainly worth a look.

I’ll be honest: I’m not a fan of on-ear headphones. I have a huge head, and almost every pair I’ve tried feels like a vise. Of course, if your headphones have ANC, you need that pressure to create a good seal. While I’ll admit the Solo Pro aren’t the ideal headphones for me, they’re still feature packed and sound good.

The Solo Pro houses the same chip that powers Apple’s AirPods, which means you get quick pairing and hands-free access to Siri. The audio tuning is much more balanced without the overbearing bass Beats has been known for. I’m convinced these are the best-sounding Beats headphones to date. ANC works well, transparency mode is handy and onboard controls are simple and reliable. Refined design touches also make these a solid upgrade over the previous Solo model and a worthy option for fans of the on-ear style.

Sennheiser’s Momentum line has been a popular headphone choice for nearly a decade. The mix of leather and metal has always given these units a more refined look than much of the competition. Last year, the company debuted the third-generation version of its Momentum Wireless, complete with active noise cancellation, EQ customization and excellent sound quality.

I had two main gripes with these headphones though. First, the battery life is only 17 hours, a little over half of what Sony offers on the 1000XM3. Second, the built-in motion sensors for automatic pausing are pretty sensitive and occasionally picked up subtle movements at strange times. The noise cancellation isn’t as powerful as what Sony and Bose offer, but it’ll do the job in most environments. The MW3 was a tough sell with its original $399.95 price, but now that it’s going for around $50 less, it’s at least slightly more compelling.

If you want capable noise cancellation that won’t break the bank, Sony’s WH-CH710N is a solid bet. The recently announced headphones are much less than a flagship model, although you will sacrifice a few things. The biggest place these fall short is overall sound quality. There’s decent range and good clarity, but they lack deep, punchy bass that would help create a fuller sound. For casual listeners who want a decent set of headphones that still have ANC, these will likely offer enough in the sonic department.

In terms of noise cancellation, the WH-CH710N exhibits enough sound-blocking power to minimize distractions. Thanks to Sony’s dual noise sensor technology, these headphones pick up a lot of that unwanted noise and automatically select the best noise cancellation for your environment. There’s also an ambient-sound option should you need to keep tabs on what’s going on around you. With 35 hours of battery life, a quick-charge feature and handy onboard controls, the WH-CH710N offer a glimpse of flagship headphone luxury for $130. Sony has already cut $70 off the price here, which makes these a great value pick.

In this article: sennheiser, audio-technica, solo pro, wh-ch710n, thebuyersguide, beats, ath-m50xbt, bose, 700, sony, momentum wireless, wh-1000xm3, feature, gear, entertainment
All products recommended by Engadget are selected by our editorial team, independent of our parent company. Some of our stories include affiliate links. If you buy something through one of these links, we may earn an affiliate commission.