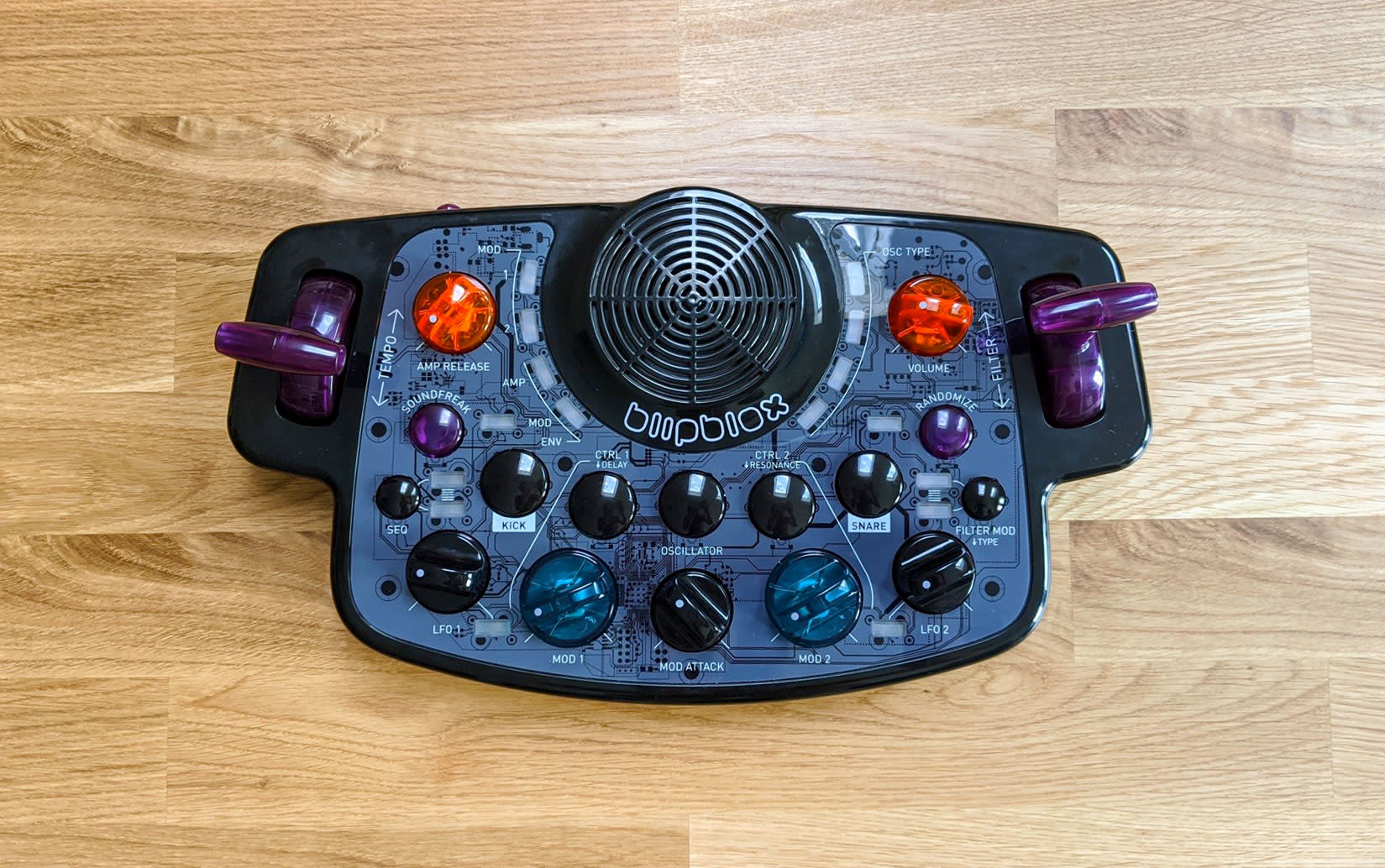 It's still basically a toy, but that's not necessarily a bad thing.

The Blipbox is a little bit pricey for a children’s toy, but it oozes personality. Plus, it promises to teach kids the fundamentals of synthesis as they grow older. Unsurprisingly, the Blipblox also turned out to be a hit with adults. I mean, it’s hard not to have fun with something that makes crazy sounds, has tons of blinking lights and feels a little bit like controlling a spaceship.

Earlier this year Playtime Engineering, the company behind Blipblox, announced a new adult themed version -- Blipblox After Dark. On the surface, it’s basically identical, except that it has a more somber color scheme. It’s got the same number of buttons and knobs, two giant levers and a decently large speaker located dead center. Some of the labels are different -- in general it’s a much more text-dense face. But this is because it’s no longer aimed at four- and five-year-olds.

The new more serious look also comes with some more serious sounds and synth features. The core functionality is the same -- you turn it on, it immediately starts spitting out melodies and riffs while you twist knobs and push buttons to mangle the sound. There are a slew of new oscillator and modulation schemes here, though, that are a little more polished sounding. Some are weirder and more experimental, some are just more musical. But it seems more time and effort was put into crafting the tones. And just like on the original, some of the sounds here are surprisingly rich.

There are also some new tools at your disposal when it comes to tweaking things. For one, there’s now a multi-mode resonant filter that’s far more versatile than the simple low-pass filter on the OG Blipblox. There’s also a new delay effect that can really flesh out the decidedly digital sounds here.

Perhaps the biggest upgrade is to the drums. The original Blipblox had one kick and one snare sample and they sounded… rough. They were about on par with what you’d get out of an ‘80s budget Casio keyboard. The new model has 50 of each and they can be pitch shifted for further customization. They’re not the most varied and interesting sounds, but they’re usable.

Largely though, the core feature set is unchanged. There are some additional controls that are supposed to make the After Dark model a little more “serious,” but in practice it still feels like a toy. That’s not a bad thing, though, if you keep your expectations in check.

The original Blipblox was tons of fun whether you’re three or 33. And After Dark is no different. Just don’t come here expecting something that can keep pace with your Roland Boutique synths or even a Volca. There’s no way to program a drum loop, play a melody or modify a sequence on board. You’ll have to hook up an external MIDI controller.

Hooking up a MIDI controller opens up a world of possibilities, though. And you can even just clock the Blipblox over MIDI to keep it in sync with your other music gear. So, if you wanted to use a particular synth sequence, but lay it over drums from your Model:Cycles, you can.

The biggest obstacle to integrating the Blipblox with a more serious music-making setup is that it’s difficult to recall a sound you liked. It’s not impossible, but keeping track of what color lights mean what, and committing all the combinations of button presses to memory takes time. It’s been a couple of weeks and I still have to reference the manual pretty regularly.

A small display or maybe even a companion app would go a long way towards simplifying things, but it probably would also add to the cost. And at $199 (or $179 if you get in on the Indiegogo pre-sale) affordability is a big part of the pitch. It’s only slightly more expensive than the original Blipblox which retails for $189. The added features are definitely worth the $10, but it’s still not an impulse purchase.

If you’re thinking of buying a Blipblox for a slightly older kid -- think eight or nine -- the After Dark model is the way to go. And if you’re an adult who just loves cheap toy instruments and things that make noise, you’ll find plenty to like. Just don’t mistake this for a Volca competitor.