Korg Volca Modular synth review: As weird as it is affordable

Finally there's a cheap way to dabble in the experimental world of West Coast synthesis.

This review is a little different. Normally when Engadget reviews something, we're bringing years of experience and expertise to the table. But not here. The Volca Modular is a semimodular, West Coast-style synthesizer. And until I received this review unit, I had zero experience with either modular or West Coast-style synths. I am coming at this device from the perspective of a novice. And that's exactly the target audience. The Volca Modular is an affordable entry point to two worlds typically priced out of the range of the casual hobbyist. So the real question isn't "what do modular experts and West Coast veterans think about it?" It's "what can a beginner like myself learn from it?"

Now, to be clear, I'm not new to the world of synths. I own a few (including a couple of Volcas) and understand the principles at work. But I'm far more familiar with East Coast, or subtractive synthesis. This is the style of synthesis popularized by instrument makers like Moog, where a harmonically rich sound source is shaped primarily through the filtering, or removal, of frequencies. (This is a bit of an oversimplification, but it will do for our purposes.) This is usually what people think of when they imagine the sound of a synthesizer.

West Coast synthesis, as embodied by the likes of Buchla, goes in a much different direction. Generally, it starts with a simple sound source (in this case a single triangle wave) and then applies various waveshaping functions, like frequency modulation or wave folding, to generate something more complex. And, perhaps just as important, these synths often dispense with the familiar piano-style keyboard.

A modular synthesizer is just that -- it's modular. This means that rather than a predetermined signal path, you actually have to combine multiple synth parts and wire them together to get the sound you want. Now, to be clear, the Volca Modular is what is called "semimodular." That means it is prewired and will make sound right out of the box. But you can reroute the signal using patch cables to achieve different effects.

In short, I was entering uncertain territory when I opened the box. The device I was looking at was clearly a Volca. It's the same size and shape as every other instrument in the series. And it has a lot of the same design DNA, from the recessed touch strip and tiny plastic knobs to the small rivets in the corner of the faceplate. But keyboard had no sharps or flats, there were a bunch of tiny cables in the box, and it had odd labels like LPG (low pass gate) and "woggle." It was honestly a little intimidating. 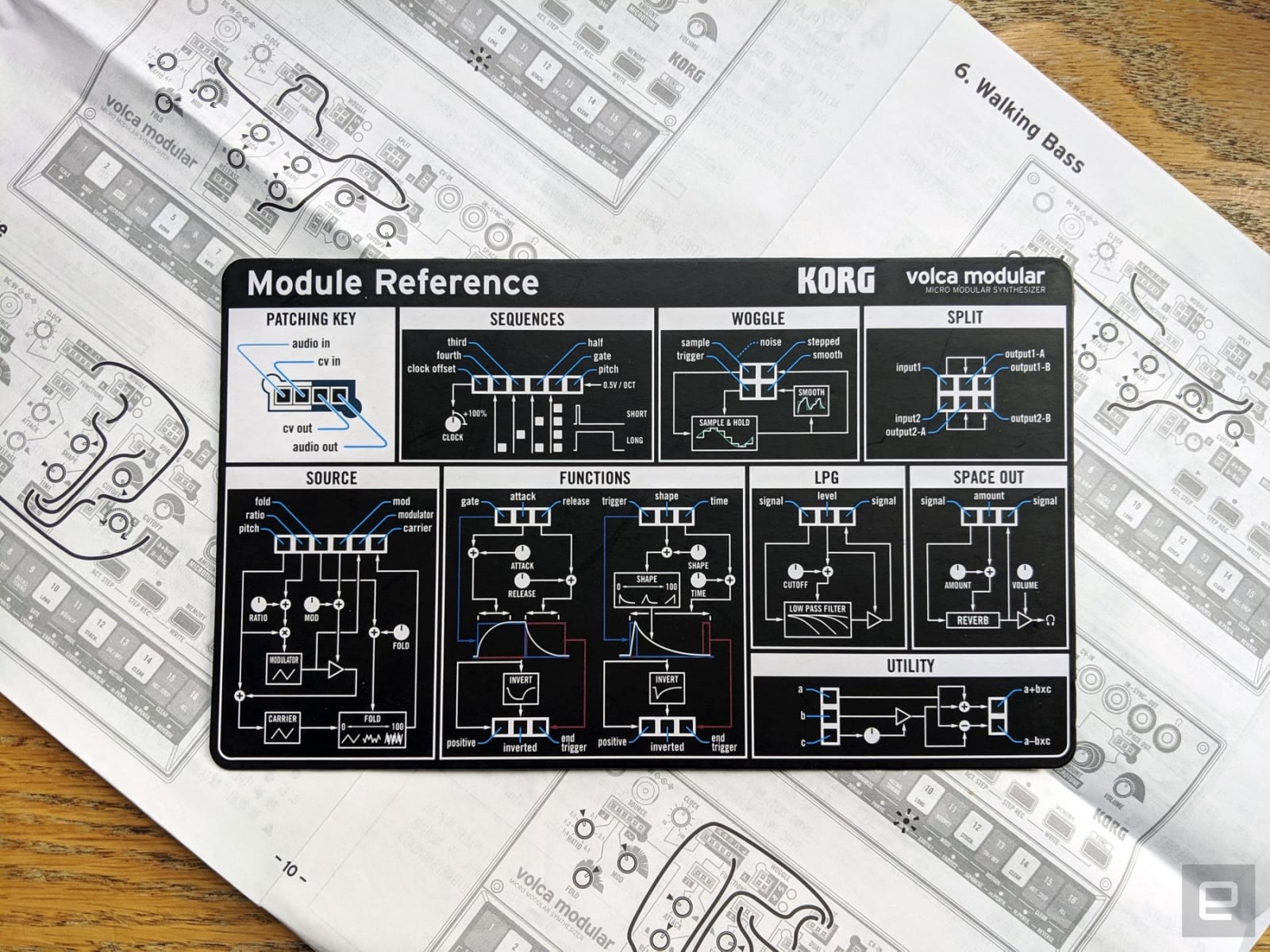 Thankfully Korg did something a little out of character: It provided useful documentation.

Most Volca's come with one large sheet of folded paper that explains only the most basic functions of the device. The Modular and FM also come with a reference card that allows you to make sense of their somewhat complicated interfaces quickly. But on the back of the card for the Modular are also some simple patching instructions that tell you what wires to connect where to get basic functions like an LFO (low-frequency oscillator) or ring modulation.

The Modular also comes with a second piece of large folded paper that contains a number of example patches. This is about as close as you're gonna get to a preset here. But that's OK. Having to hook up the wires every time I wanted to make a new sound really forced me to learn how the various parts of the synth interacted. I couldn't fall back on an awesome gut-rumbling bass built by a highly trained sound designer at Korg; I had to figure it out for myself.

That said, there is one issue I kept running into time and time again. It turns out, it's hard to get something that you would call traditionally musical out of the Volca Modular's two analog oscillators. It is, by design, kind of weird and abrasive sounding. It excels at noisy squelches, percussive clicks and metallic stabs. If you're hoping to get delicate pads or a classic synth lead sound of this, you'll be sorely disappointed. But if you've ever wondered what a bunch of water droplets would sound like if they did a pile of cocaine, well, the Volca Modular might just have the answer.

As atonal as most of the sounds it produces are, they're still quite fun to mess with. The eight modules and 50 patch points give you so many different combinations to explore. And the range of noises the Modular spits out are unlike anything else in the Volca range. The Volca Keys, Beats, Bass, Kick, Drum and even FM are all pretty straight forward. While the FM can be difficult to program, all of them are relatively immediate and fill familiar musical niches. The Modular, on the other hand, is far more experimental, far more alien and requires far more patience to get the most out of it. I do not mean that as a negative, though. It just makes the Volca Modular unique among Korg's lineup of entry-level synths.

Like the rest of the Volca range, there are sacrifices made to keep the instrument portable and battery-powered. The knobs are small, and in poor lighting, it can be difficult to tell where they're set. (I've used a white-out pen to mark the notches on my FM and Keys for better visibility.) Tiny adjustments can have a huge impact on the sound, too, which can make recapturing something you like problematic. The speaker is also passable at best. It's nice that you don't have to plug in headphones or an external speaker to get sound from a Volca. But the internal one is kinda small and tinny. 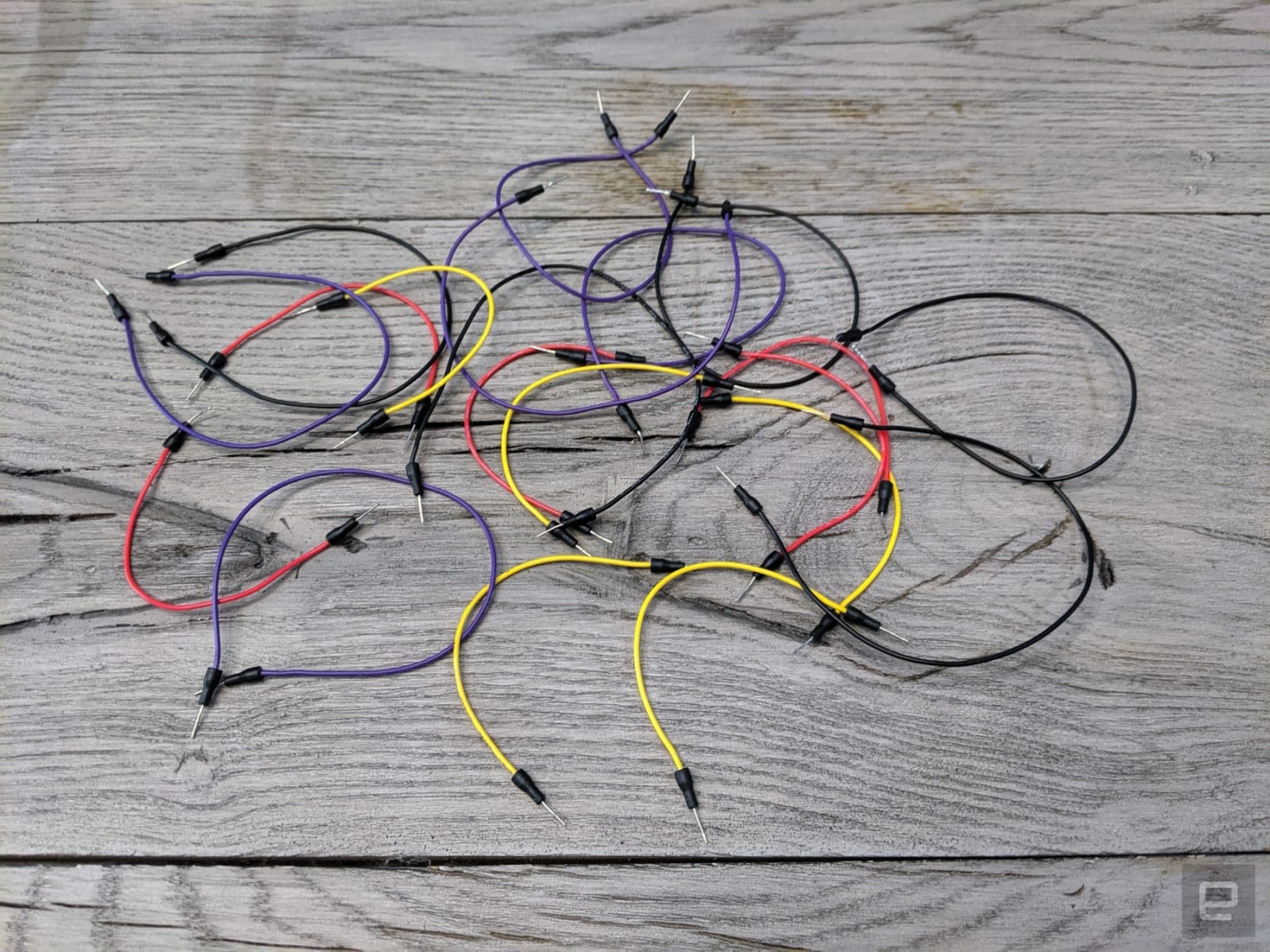 The biggest tradeoff here, though, is the patch cables. While you can connect external gear to the Volca with the standard 3.5mm cables used on most modular synths, patching within the Volca itself relies on the sort of tiny pin-tipped cables you'd stick in a breadboard. They're a little annoying to work with at times, and it's not clear how much abuse they'll be able to take.

The good news: Korg dramatically improved the sequencer and added some useful features to the keypad. Rather trying to navigate your way around an incredibly small piano-style chromatic touchstrip, the Volca Modular can be set to only play notes in a certain scale. You can also create unique scales using the microtuning feature, which is perfect for shedding the shackles of Western 12-tone equal temperament.

The 16-step sequencer can be programmed live or in step mode. And there's the usual Korg motion sequencing, which allows you to record changes to certain parameters. But there's also two new modes of playback: bounce and stochastic. The bounce mode plays a sequence forwards then backward in a loop, while stochastic progresses semi-randomly through the sequence. 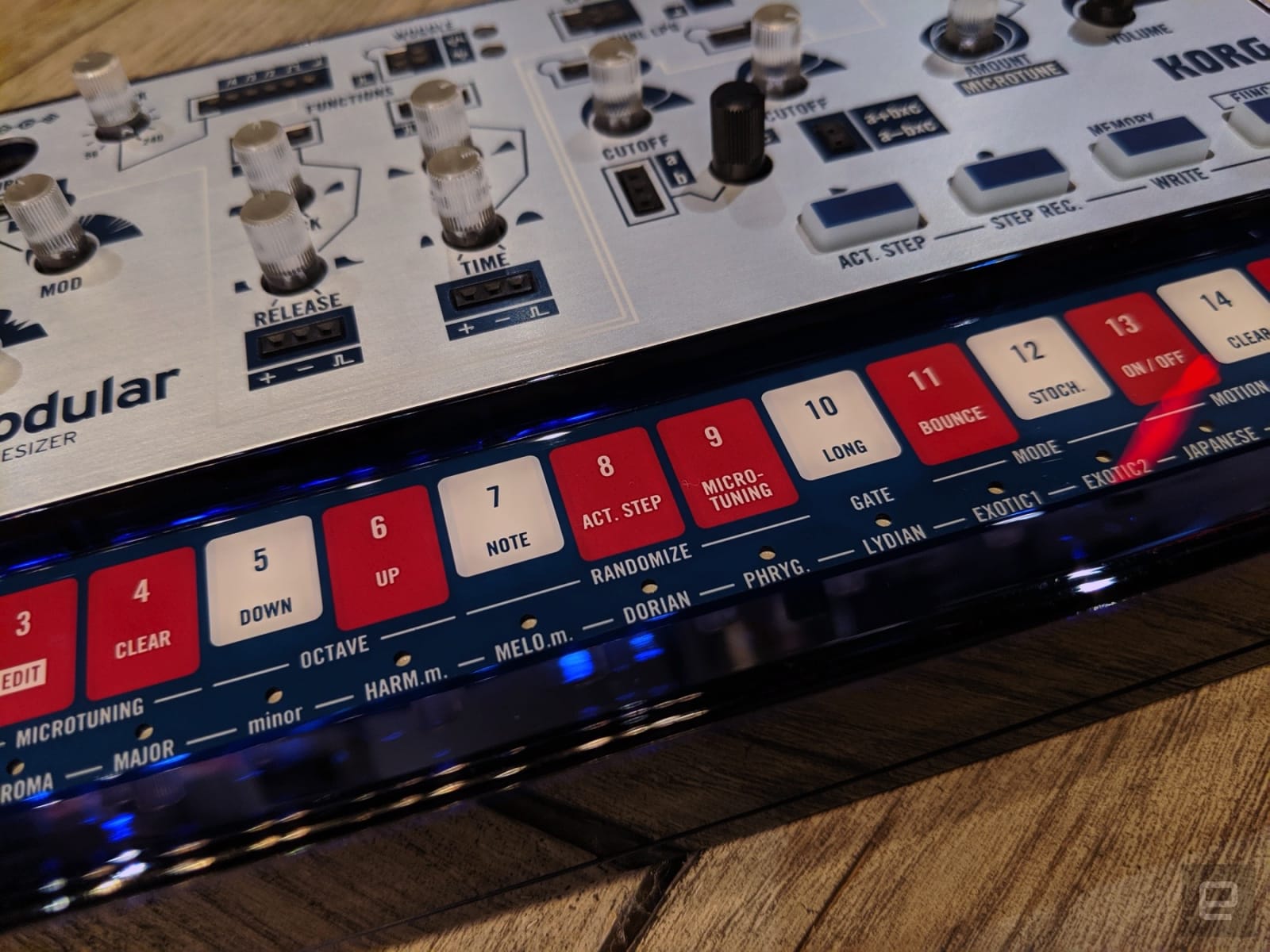 That dash of unpredictability is sort of the defining trait of the Volca Modular. You can randomize the microtunings of notes, the notes in a sequence, which steps in a sequence are played, and what order they're played back in. The "woggle" function I mentioned earlier is just a sample-and-hold connected to a noise generator for introducing randomness to your patches. This is an instrument that doesn't want to be tamed. It wants to surprise you. Its ultimate goal is to provide as much opportunity for happy accidents as possible.

If making something odd and unpredictable sounds appealing to you, the Volca Modular ($200) isn't a bad deal, especially when you consider that West-Coast synths tend to be expensive niche devices. (If you know of other affordable ones, please them in the comments.) Make Noise's 0-Coast (that's pronounced "No Coast") blends West and East into what qualifies as affordable in this realm -- it costs $499. It also requires a separate keyboard or sequencer to play. If you wanted to get a true West Coast classic like the Buchla Music Easel (which the Volca Modular cribs its design from) you'll have to cough up $4,999.

Even if you're looking to stay with the more traditional East Coast sound, a cheap semimodular like Behringer's Neutron will still set you back $300. The company's Crave synth is supposed to cost just $199 when it comes out, but I haven't heard a firm release date just yet.

Korg's Volca Modular serves a very different purpose from those other devices. It's there to introduce musicians and sound designers to something new. It's a way to explore two worlds that are often just out of reach of the novice or budding synth addict. It's unlikely to find its way into as many musicians' arsenals as earlier entries in the Volca series. But it might whet their appetite for something more experimental.

All products recommended by Engadget are selected by our editorial team, independent of our parent company. Some of our stories include affiliate links. If you buy something through one of these links, we may earn an affiliate commission. All prices are correct at the time of publishing.
View All Comments
Korg Volca Modular synth review: As weird as it is affordable