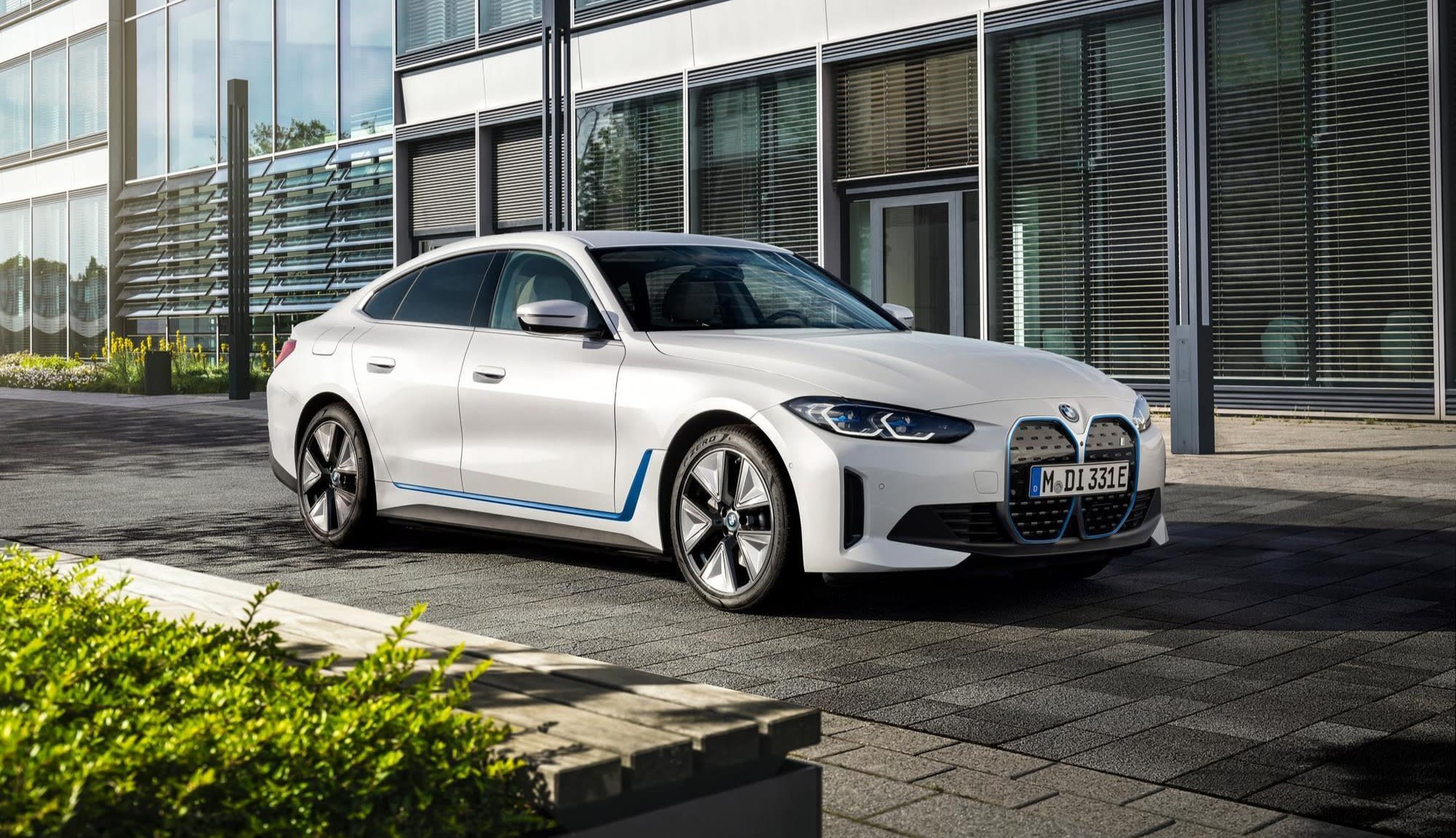 BMW has revealed more specifications about the i4 electric sedan it unveiled in March along with US pricing and availability. It also announced the price and extra details for its luxury iX SUV announced late last year, including news about a 600 horsepower version. Both models will arrive in the US in the first quarter of 2022.

As BMW's electrified 4 Series model, the i4 will be a linchpin for the company's electric future, running on the same eDrive EV platform as the iX. The base rear wheel drive i4 eDrive40 version will start at $55,400 with an 81.5kWh battery that will deliver up to 300 miles of range. It comes with a 335 horsepower electric motor that will accelerate it from zero to 60 MPH in 5.7 seconds.

The more upmarket M50 version (above) with BMW's high-performance M badge will start at $65,900 (add a $995 destination charge for both models) — a bit less than the company's gas-powered M3. That model offers both front and rear motors for all-wheel drive, upping the power and torque to 535 horsepower and 586 pound-feet, respectively. In terms of acceleration, it will go from 0 to 60 MPH in 3.9 seconds. With that extra performance and the same 81.5kWh battery, however, range drops to 240 miles.

The 72 cell battery pack runs on 400 volts with up to 200kW charging capacity, meaning it'll take you 31 minutes to get from a 10 to an 80 percent charge. Ten minutes of charging at 200kW will increase range by up to 90 miles (all based on preliminary EPA range estimates). Those figures are no doubt helped by the i4's 0.24 drag coefficient, just above Lucid's claimed 0.21 figure.

The i4's iDrive 8-powered infotainment system comes with a 12.3-inch information display and 14.9-inch control display, all behind a single piece of curved glass. With up to 20 times more processing power than before, the 8th-generation iDrive system found in both the i4 and iX that will allow support for both Level 2 and Level 3 self driving systems, BMW said earlier this year. The latter has yet to appear in any US production car, though Honda claims its Legend — that went on sale in limited numbers in Japan — is capable of the feat.

BMW's iX, meanwhile, will be offered in the US as the iX xDrive 50 starting at $83,200 plus a $995 destination charge. It comes standard with all-wheel drive and 516 horsepower from two electric motors, helping it go from a standing start to 60 MPH in 4.6 seconds. The 105.2kWh battery, while considerably larger than the one on the i4, will deliver the same 300 mile range. While that's the only model coming to the US for now, BMW said that a sportier 600 horsepower iX M60 version will arrive later on.

As with the i4, the iX will have 12.3- and 14.9-inch infotainment displays, while offering the same iDrive 8 system. That will power its various navigation, entertainment, and driver assistant systems. The latter includes BMW's Lane Keeping Assistant that can operate at speeds up to 125 MPH.