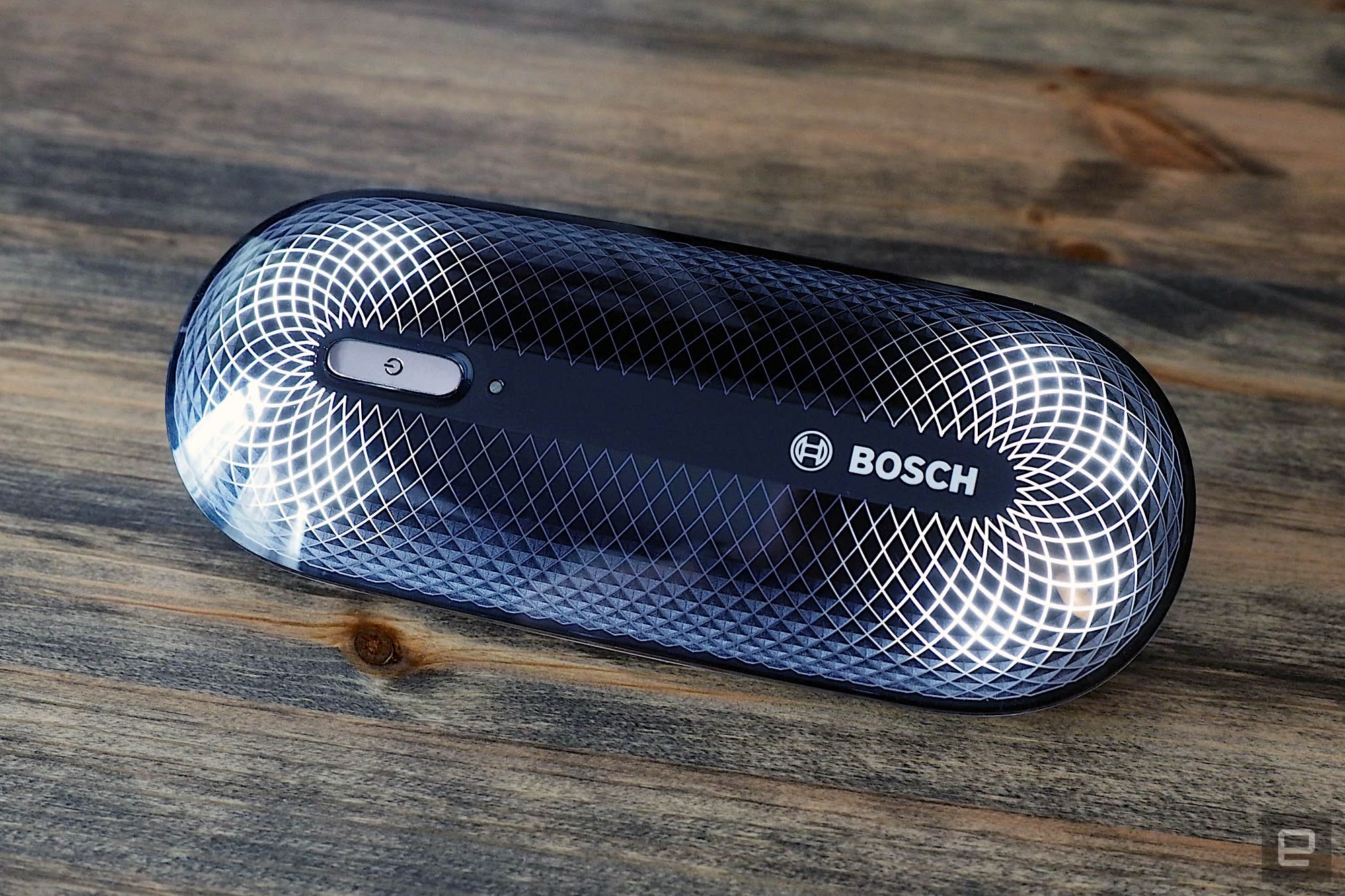 Bosch's stink-removal gadget just swaps one smell for another

According to the National Park Service, washing machines are bad for our planet, so bad in fact that they can use up to 41 gallons of water per load. That’s not ideal given the prevalence of droughts as climate change intensifies its work to wipe humanity from the face of the planet. That’s why Bosch, the German multinational which makes, uh, pretty much everything, has created FreshUp. It’s a tool designed to “refresh” your clothes without the need to dump them into your washing machine.

The idea is to remove odors from clothes that are otherwise clean, in the sense that they’re not visibly stained. You know, an evening gown or tuxedo that looks a million dollars but smells like the bottom of a well-visited ashtray, or that t-shirt that goes perfectly with your outfit, but smells a little bit sweaty. In those situations, you’d grab this doodad, rub it over the required garment and step out smelling fresh as a daisy.

FreshUp is a lozenge-shaped device measuring 6.5-inches long, with a 2-inch treatment area on its underside. Once charged and turned on, you press this against your dry clothes so that the process of breaking down the smell can begin. It works as an ionizer, creating a plasma which Bosch says dissolves the connections between odor molecules.

There’s a beautiful design on the top that’s designed to resemble an interlacing series of magnetic field lines. This is backlit in white, and turns purple when it’s actually treating your clothes with its ionization. Despite the overall vibe that this is a product that fell out of a Sharper Image catalog twenty years ago, it’s impeccably designed. Thankfully, there are no “but wait, there’s more” innovations to add to the list of jobs this thing can do.

The battery takes around four hours to charge and will give you an hour of processing before it needs to go back on the wire. Bosch also chose a micro USB port for charging rather than USB-C, which is, you know, a choice you can make in 2021. But it’s not ideal if you’re trying to minimize cable clutter and are looking to ditch the older standard as soon as possible.

As soon as you’ve treated a garment with FreshUp, you’ll be acutely aware of the ionization in the air. It offers a similar smell to the taste you get in your mouth when you’ve bitten your tongue. That iron-in-the-blood scent that clings to your hand when you’ve held onto some loose change while waiting for a vending machine. And it doesn’t just sit on your clothes, but hangs in the air, where on very dry summer days you’ll want to make sure you leave your windows open to encourage airflow.

In its sales pitch, Bosch says that FreshUp was designed to eliminate what it describes as a “chair-drobe.” You know, that pile of clothes in your bedroom that maybe you drape over the back of a chair, or stuff on the bottom of your wardrobe, because they’re too clean to wash. I’m not a regular chair-drobe-ist, but the fan housing of my rowing machine is sturdy enough to drape clothes over on the rare occasions they wind up in this state. Bosch adds that, after treatment, “even tough odors such as cigarette smoke and body odor are removed, leaving clothes as if they have been hung outside to dry.”

And here’s where I’ve really earned my wages over the last month or so, because I’ve spent a chunk of this summer sniffing awful things. Not to mention, of course, wearing already-worn clothes and spending way too long with my nose in my own armpit. I’ve been testing a high-intensity exercise bike and trying to be as active as possible, all the while getting my clothes covered in cigarette smoke and frying oil. Consider this a content warning for what is about to follow, as well as a polite request for danger pay.

There were plenty of smells that the FreshUp was able to dispel without breaking much of a sweat, including the cigarette smoke and fried food. It’s in this regard that makes me think that FreshUp is perfect for traveling, when you want to make sure that you’re looking and smelling your best. If your top smells like the inside of an ashtray, just waft this thing over it, hang it up for an hour or two, and boom, you’re away.

But no matter how much I rubbed this thing over the armpits of my well-worn t-shirts (after, I should make clear, the fabric had dried out) I could never banish the smell of my sweat. I tried everything, including leaving a t-shirt hanging up for a day or two and then treating it again, then leaving it to hang for another couple of hours, and nothing. The scent wasn’t eliminated, although I will say that it was moderated somewhat, but not enough to make you not deeply self-conscious about how you smell. But I did wonder if this was a “me” problem rather than Bosch’s, and so grabbed clothes from other family members. One of my relatives who went for a run handed me a pair of their socks which stank so bad that they probably violated chemical weapons laws.

And again, I’d like to reiterate that the time I spent dry-retching was all in the service of good journalism.

Once dried out, I treated those socks and found that, again, FreshUp hadn’t destroyed the smell, but it had reduced the urge to heave. That, broadly speaking, means that this is not going to be your savior if you’re schlepping around in a warm country.

But if you aren’t cursed with the blight of free-flowing underarms (or, in Richard Nixon’s case, upper lip) then I think FreshUp may have a place for you. I can think of some times where, after a long evening on assignment, I’d love to give my clothes an emergency refresh. If you’re doing two or three smart events back-to-back and can’t visit a dry cleaners, then FreshUp is probably a good shout, but the use cases are limited.

But don’t expect the results to be as good as washing, because fundamentally, nothing is going to be able to replace your washing machine just yet. And then there’s the price, which at £250 ($342) is a little high for a device that can’t revolutionize how you do laundry. At least, not yet.

All products recommended by Engadget are selected by our editorial team, independent of our parent company. Some of our stories include affiliate links. If you buy something through one of these links, we may earn an affiliate commission. All prices are correct at the time of publishing.
View All Comments
Bosch's stink-removal gadget just swaps one smell for another