Bose Sleepbuds 2 review: How much is a good night's rest worth?

What might be minor inconveniences become bigger problems at $250.
T. O'Brien|03.15.21
@TerrenceOBrien

The original Bose Sleepbuds were not exactly a rousing success. Long-term testing revealed inconsistent battery life, random shut-offs and unreliable Bluetooth. But the company claims it has fixed those problems and landed on a product that should please its demanding customers.

Brian Oh, our senior video producer here at Engadget and I have both been testing the new $250 Bose Sleepbuds 2 to see if they can help us rest a little easier at night.

Brian, like many of us, has trouble getting to sleep and staying asleep.

The root cause of his sleep issues are very similar to my own: an overactive brain. Neither of us can sleep in silence because our inner voice literally WILL. NOT. SHUT. UP. For me this has led to a lifetime of chronic insomnia that has at times required medication. There are, of course, differences in our situations. Brian tends to be a light sleeper, waking up at every little sound including his snoring dog. I, on the other hand, could probably sleep through armageddon. (I still frequently wake up in the middle of the night, just usually due to back pain or night terrors… I’m a blast to share a bed with.)

After two weeks we can both report at least some success. The bigger question is, can a wearable sound machine ever be worth $250?

Now, I want to be clear: The Bose Sleepbuds are not headphones. You can not use them to listen to music or podcasts. They can’t answer phone calls. You load a selection of soothing sounds on them from Bose’s library and… that’s it. And yes, you load the sounds on them, not stream. The Bluetooth here isn’t any good for streaming audio, and frankly it’s pretty damn slow for transferring even the small files we’re talking about.

The Sleepbuds are very much a single-use gadget. So, everything rides on how well it does that one thing. In order to succeed they need to be small and comfortable enough to wear all night. They need to block enough sound to keep the nonstop traffic outside at bay, or at least muffle the loud snorer next to you. But they also need to let enough in that a smoke alarm will get you up and moving. The soundscapes also need to be pleasing to the ear, without obvious seams, and cover a wide range of styles to suit people’s tastes. Lastly, they need to be easy to use because no one wants to fight with a buggy and complicated app as they’re getting ready for some shuteye.

Let’s go through these requirements one-by-one, starting with comfort.

Are the Sleepbuds 2 comfortable? Yes, with some caveats.

The soft-touch plastic and antifriction coating are honestly better than basically any earbud, wireless or otherwise I’ve ever worn. Brian also had few complaints. These have all the hallmarks of the sort of premium products Bose has built its name on. And the seal keeps out enough of your environment that you might not even need the sounds if all you’re doing is trying to keep a noisy radiator at bay.

My wife is an incredibly light sleeper; she requires absolute silence. If I get out of bed to use the bathroom in the middle of the night, she shoots up like someone just kicked in the front door. So, I’ve tried to wear earbuds to bed before since our sleeping habits are so different, but I just can’t do it. I had no problem passing out with the Sleepbuds in my ears, though.

As the night drags on things get a little different.

Brian, for instance, is a side sleeper, and while he found the buds comfortable enough in a vacuum, he had to position his pillow just right so that it wasn’t shoving them deeper into his ear and disrupting his sleep.

I toss and turn a lot in my sleep and almost every night either I would end up in a position where the buds were pressing uncomfortably into my ear, or they would just fall out. Brian also had one of the buds fall out a few times and we can both confirm that trying to find these tiny earbuds in your bed while half asleep without glasses on is a surefire way to ruin your night.

So, for short periods of time in a controlled environment, the Sleepbuds 2 are extremely comfortable. But, in actual use it’s a bit of a mixed bag.

The same is true of the sound selection. It took both me and Brian a few nights to find the sounds that worked for each of us. He preferred the steady hum of the Warm Static under the Noise Masking category, while I was drawn to the ambient drones of Wanderlust found in the Tranquilities section.

The Noise Masking, Naturescapes and musical choices cover a lot of different ground that should satisfy a wide variety of tastes. There are 50 sounds in total, which is pretty decent and they’re all perfectly seamless, too. Yes, you can tell they’re relatively short audio loops, but you’d be hard-pressed to identify the loop points.

Now, personally, I found the Naturescapes and Noise Masking settings to be almost oppressive, despite the fact that I often use nature sounds as a sleep aid. (I’m partial to crickets and thunderstorms.) Brian, on the other hand, thought the Tranquilities were just too distracting and could only imagine using them for meditation.

And, look, you can’t please all the people all of the time, but I like my nature sounds. The thing is, I just don’t like the nature sounds here. The Boardwalk, for example, sounds less like waves crashing on a beach and more like someone caught a fraction of a second of a wave and looped it until it was basically indistinguishable from whitenoise. With no variation or movement, the Naturescapes just… don’t sound natural.

This would be less of an issue if you could simply pump in your own sounds. I often like to fire up Headspace to do a wind-down exercise and meditate before bed, but I can’t use that with the Sleepbuds. And I have even created my own sleep sounds from field recordings I’ve taken of storms, crickets and katydids. If the Sleepbuds worked just like any other set of Bluetooth earbuds I could simply listen to that. But, you’re stuck with what Bose gives you. 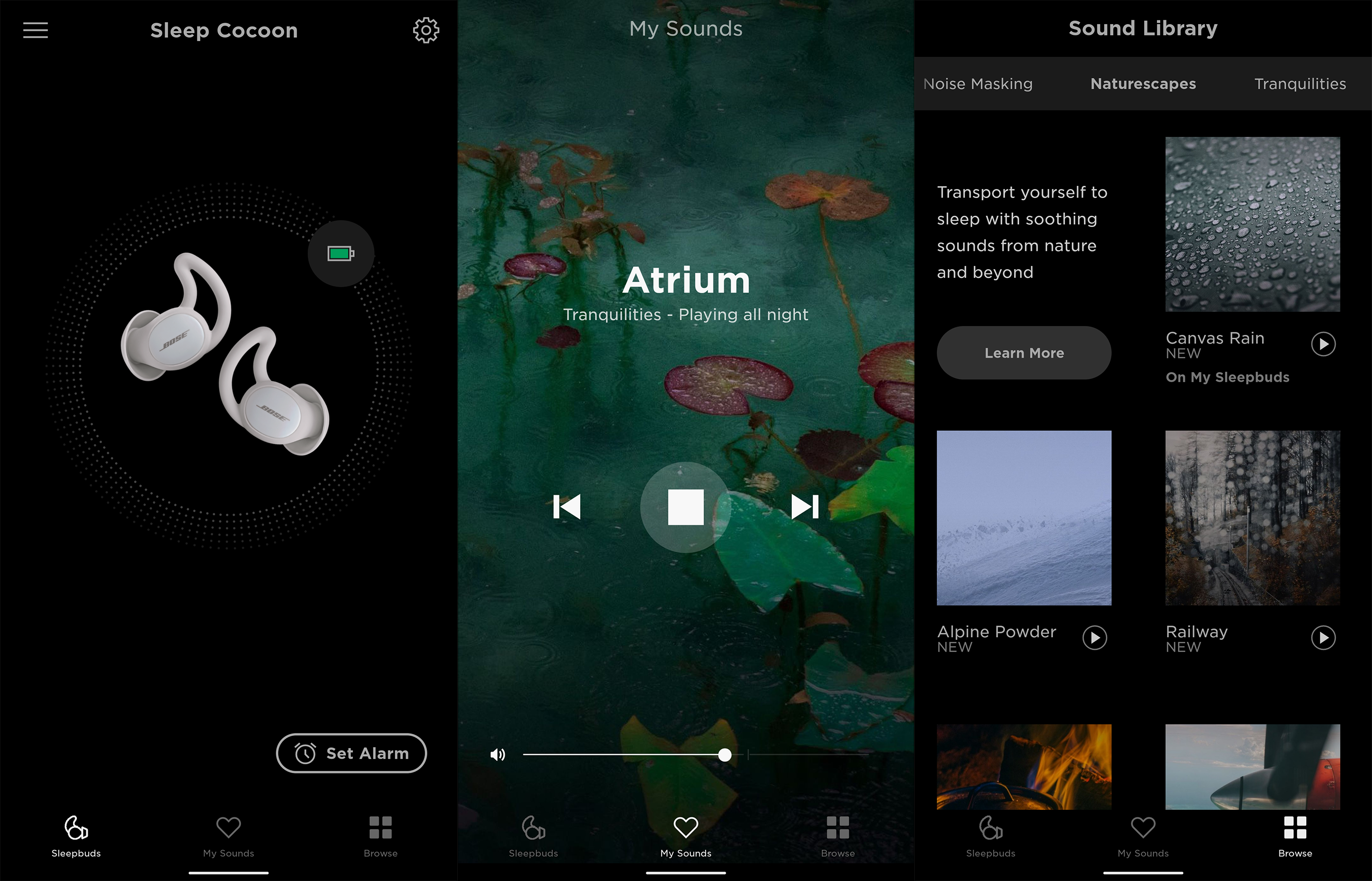 You’ll obviously need to use the app to browse the sounds and load them on to the earbuds. I’m happy to report it’s clean and simple and functional. One of my favorite options is phone-free mode. Basically it just programs the Sleepbuds to play a specific sound the moment they’re taken out of their case. That means you actually don’t need to use the app at all, which is nice if it’s late and you’re exhausted. This does disable a few features, but honestly it’s not a huge loss.

There were a few questionable decisions made during the design of the app, though. For one, there’s no master list to browse where you can see what is on your earbuds and swap sounds. Instead you swipe through them one by one, and you’re only given a prompt to remove sounds if you try to add a new one, but there’s no more storage.

Since there’s no streaming of Bluetooth audio, all the sound previews happen on your phone, not on the buds. Which means unless you want to piss off your bedmate, you better figure out what you want before you lie down. Lastly, you can’t browse sounds and see what’s available unless the Sleepbuds are connected to your phone, which requires taking them out of their case.

And then there are the alerts. You can have the Sleepbuds ring in your ears if you get a call, which I guess is useful? Honestly, something like alerts from my home security system would be far more helpful. Or even just my phone’s alarms. The Bose Sleep app has an alarm feature, but you can’t simply forward your existing alarms to the buds.

These are all minor inconveniences, but they add up.

The problem is, since this is such a niche single-purpose gadget, there should be basically zero inconveniences for $250. Sure, the Sleepbuds 2 helped me sleep, but not much more so than Headspace or my own nature recordings. Brian meanwhile, had to develop a convoluted system of playing a podcast on his phone loud enough that he could hear it over the Warm Static on the Sleepbuds to really find a workable solution.

We both agreed that the Bose Sleepbuds 2 aren’t bad; they’re just not great. And they’re definitely way too expensive. If you were desperate to completely block the outside world and struggled to fall asleep every night, they might be a great investment at $100, or even $150. But a $250 wearable whitenoise machine is borderline absurd.