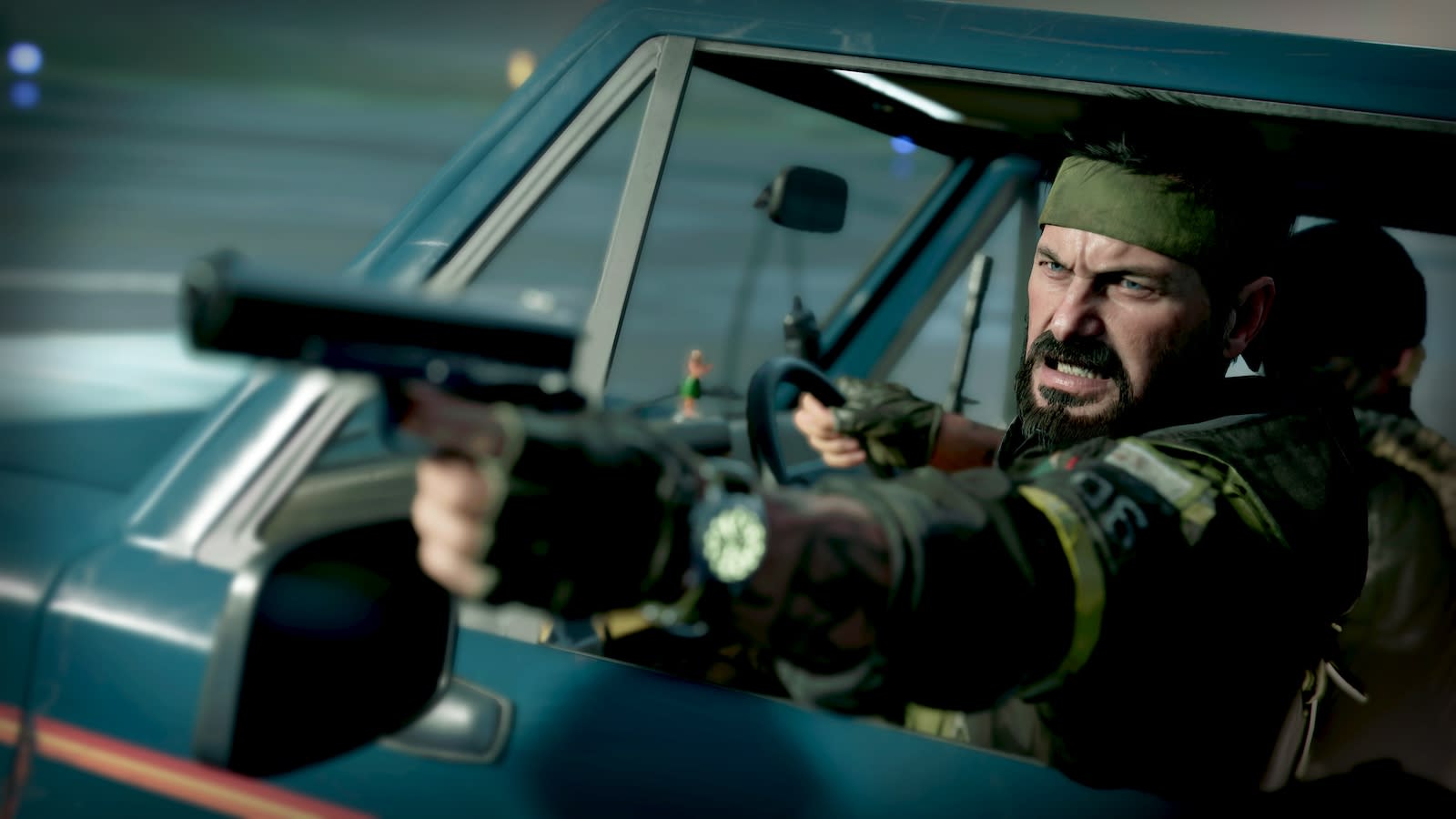 Here's our first look at the campaign, including those Vietnam War scenes.

Developers at Treyarch and Raven Software are worried about the terrible power that propaganda, disinformation and conspiracy theories have to construct systems of inequality and support dangerous dictators. So, naturally, they built a game that perpetuates a famous conspiracy theory.

Call of Duty: Black Ops Cold War lands on Xbox One, PlayStation 4 and PC on November 13th, and it’ll hit next-gen consoles once those arrive this holiday season. Cold War covers a long swathe of dense ground, spanning the Vietnam War in 1968 to the height of atomic tensions in the 1980s. The bulk of the game takes place in 1981, but there are a few trippy, nightmarish flashback levels set in the middle of a Vietnam battlefield. A single, mysterious person connects these eras and the game’s espionage-heavy storyline: Perseus.

Perseus is the name of a well-known, yet likely fictional, Soviet spy who supposedly infiltrated the United States’ atomic-weapons program in Los Alamos around the end of World War II. There are vague references to Perseus in the pages of the Verona Project, a WWII US counterintelligence program that intercepted messages from Soviet sources, and Russian officers themselves have whispered about a spy named Perseus who had access to the Manhattan Project.

While there absolutely were Soviet spies hidden in US and United Kingdom atomic labs at the end of WWII, Perseus is widely considered to be a lie created by the USSR.

“We want you to ask, ‘What is real?’” said Murray Kraft, the lead writer on Cold War, during a virtual preview last week. “The phrase ‘Cold War’ is not something I recall hearing as a kid, at least not until I was older. But I remember that shadow hanging over us, the possibility of conflict between the US and USSR, and it really permeated so much of the pop culture of the 1980s. We took those feelings and that inspiration, and we put them into the game. In a fun way.”

All of this paranoia-mongering and malleable reality is standard fare for Black Ops. Cold War is a direct sequel to the original Black Ops, which came out in 2010, and it stars a cast of recurring and new faces. The elite agents Alex Mason, Frank Woods and Jason Hudson return -- wiped of all Soviet reconditioning efforts, surely -- and this time they’re joined by President Ronald Reagan, who sets them the task of unmasking Perseus before he or she enacts atomic justice on the US.

Unlike most other Call of Duty titles, there are multiple endings in Cold War, and branching narrative paths that players can take to get to each one. How players make their way through the game, and when they decide to jump into side missions, will dictate which ending they receive. Treyarch and Raven haven’t laid out exactly how many endings Cold War has, but the game has multiple save slots, meaning players will be able to boot up completed missions, try a different action, and see how it affects the rest of the game from there.

At the top, Cold War features a character-creation system that allows players to select their name, skin tone, place of birth, military background and gender. Developers have added a “Classified” option to the gender drop-down list, which translates to “non-binary” in the game, populating they/them pronouns in dialogue scenes. There’s no voice actor for the main character, regardless of the selected gender.

“We didn’t want the character to have a voice,” Dan Vondrak, creative director at Raven, said. “We wanted the player to be the one with the voice. It wasn’t a production thing, it was this philosophical thing and there were debates either way.”

Throughout the preview, Treyarch and Raven developers showed off a series of cutscenes, trailers and gameplay moments, each filled with crisp animations and neon-splattered environments ripped straight out of the ’80s. Reagan looks lifelike as he sets the operatives on their mission in a dark White House meeting room, and the various shooting fields, KGB palaces and military vehicles are beautifully detailed, as expected out of an Activision-backed CoD title.

One location stands out, though: Vietnam. The Vietnam war scenes are flashbacks or dream sequences, and on top of the gunfire and explosions of battle, they’re infused with delusion and impossible physics. In one scene, the player is running up a dirt hill amid volleys of bullets when a large red door falls from the sky, blocking the way forward. An attempt is made to circumvent the door, and another one drops to the ground. “Tell me about Perseus,” a disembodied voice says, ominously.

The Vietnam war scenes are also memorable because, well, it’s the Vietnam war. During a Q&A at the end of the Cold War media preview, developers were asked if there would be an option to engage with these segments non-lethally.

“No, we did not make a full non-lethal playthrough for this Call of Duty,” Vondrak responded, laughing at the end of his sentence.

The question was asked for the same likely reason Activision has never greenlit a Call of Duty game dedicated to The Vietnam war: The US military’s actions in Vietnam were atrocious and widely regarded as a massive mistake.

Fueled by anti-communist sentiment, the US government aligned itself with South Vietnam in the mid-1950s, and the conflict functioned as a proxy war against the Soviet Union and China, both of whom backed North Vietnam. With the world’s most advanced military technology at its disposal, the US obliterated Vietnamese soldiers and civilians for 19 years, while making negligible progress against the North and seeding deep divisions at home.

In Vietnam, US orders were best summarized as, “kill anything that moves.” During the infamous My Lai Massacre in 1968, US troops slaughtered more than 500 civilians over the course of four hours, stopping for a lunch break in the middle. US planes dropped the explosive power of 640 Hiroshima-sized atomic bombs on Vietnamese military structures and villages. Throughout the conflict, US attack helicopters, carpet bombings and heavy artillery killed as many as 3 million Vietnamese people, 2 million of whom were civilians. By the end of US involvement, 58,000 American soldiers had died, many of them marginalized in everyday society and drafted against their will.

The US retreated from Vietnam in 1973, bloody, victoryless, and with a generation of traumatized soldiers to support -- or, as was often the case, to completely ignore.

By nature, every war is gruesome, ruinous and inhumane, but Vietnam represents a particularly dark mark on US legacy. In Vietnam, this conflict is called the American War, or the Resistance War Against America.

Kraft, Cold War’s lead writer, acknowledged this history at the very beginning of the preview, saying, “We’re also going back to 1968, to a dark period of American history, the Vietnam war.”

If there ever was a moment for a non-lethal option in a Call of Duty game, the Vietnam war might just be it. It’s not like this is a new idea for the CoD squad -- Infinity Ward implemented a non-violent option in the 2009 Modern Warfare 2 level “No Russian,” which allowed players to participate in a mass shooting at a busy airport. There’s also a Vietnam war level in the original Black Ops, also developed by Treyarch, and there’s no option to navigate that battlefield non-lethally.

It’s unclear just how much of Cold War takes place in this Vietnam war nightmare land, so perhaps it is laughable to consider letting players sneak their way through these scenes. Or maybe there’s a plot point tied directly to the number of Vietnamese soldiers that players gun down. After all, if Treyarch is aiming for authenticity, that would fit. As the US Army didn’t have a clear indicator of progress throughout the Vietnam war, it used body counts to measure the success or failure of any given mission.

Such a mechanic would be ridiculously tone deaf, even for Call of Duty. Overall, it seems Treyarch and Raven are approaching Cold War’s Vietnam storyline the same way they’d handle any other battle scene in any other installment: authenticity only to the point of entertainment. Discomfort isn’t the goal. Playability is.

To that end, the Vietnam scenes look engaging, lush and mysterious, with a surreal edge that makes them stand out from classic Call of Duty fare. History adds a twinge of unease to the scenes of US soldiers slaughtering Vietnamese people, but for the majority of players, it’ll pass unnoticed.

Besides, most people pick up Call of Duty every year for multiplayer, not the single-player campaign. To that end, Cold War will support cross-platform play, a new Zombies mode, and shared content with Call of Duty: Warzone, Activision’s battle royale franchise. Cold War and Warzone will have shared progression features as well -- but that’s basically all Activision, Treyarch or Raven have confirmed for now. The Call of Duty Twitch channel will share more information about non-campaign things on September 9th.

Treyarch and Raven were an unlikely pairing for Cold War. Sledgehammer Games was originally scheduled to create this installment with Raven Software, but that partnership fell apart in 2019 and Treyarch stepped in. This speed bump, alongside a global pandemic that’s shifted the business models of most industries, could’ve spelled disaster for Cold War. Instead, it seems Treyarch and Raven have firm control over their own version of the Cold War, and all of the atrocities they want to inflict on it.