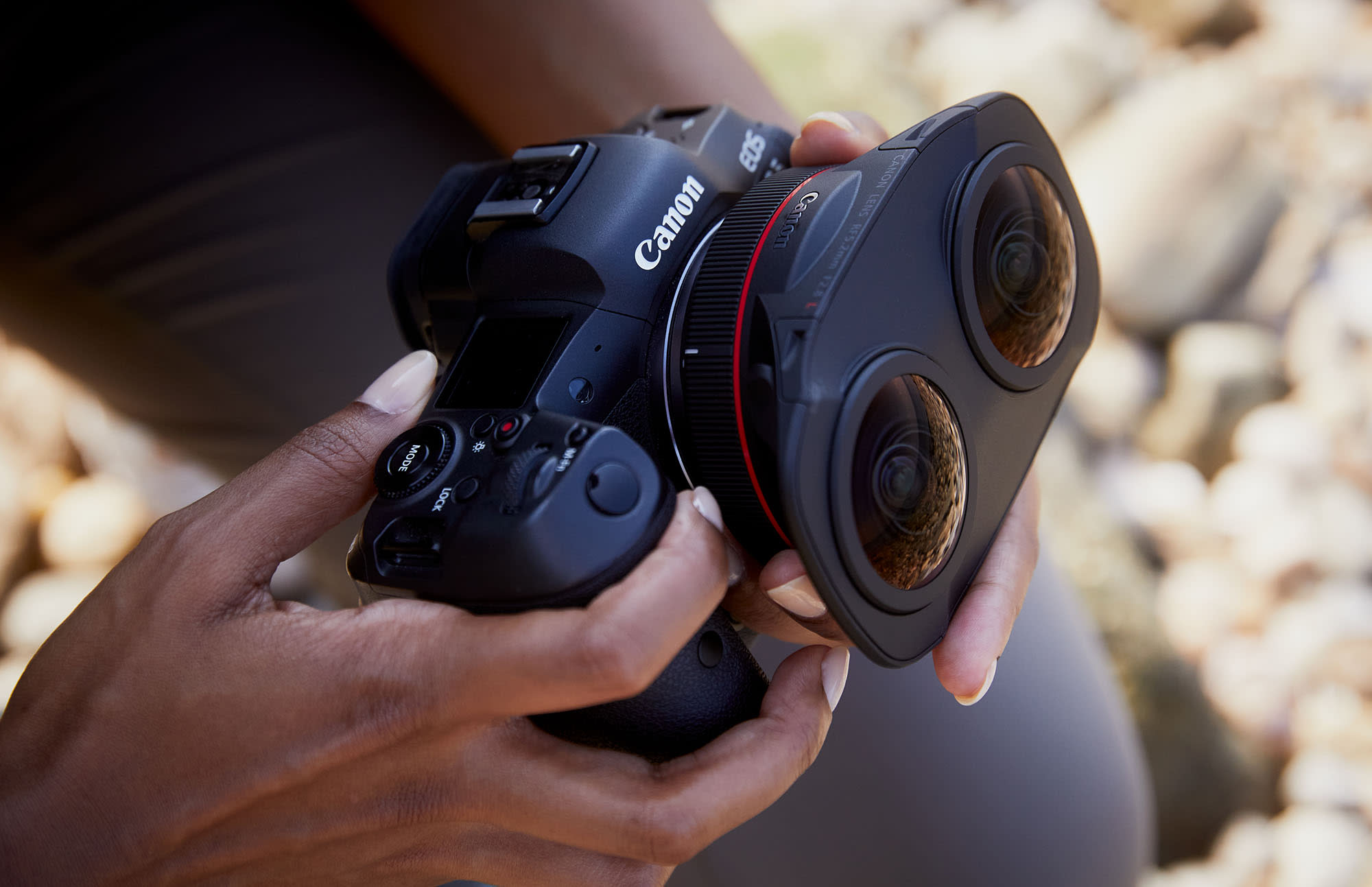 Canon has made a surprising product announcement, revealing a dual, RF mount fisheye lens that's part of an all-new system called EOS VR. Its aim is nothing less than to transform virtual reality (VR) and augmented reality (AR) production by making workflow simpler than current VR capture systems, while delivering the quality of a full-frame mirrorless camera.

The key product is the $1,999 RF5.2mm F2.8 L Dual Fisheye manual lens designed specifically to mount on Canon's 8K-capable EOS R5 camera. It's a highly unusual looking product, to say the least, with two bulging fisheye lenses mounted side by side. They're placed approximately 60mm (2.4 inches) apart to match human interpupillary distance and provide comfortable parallax for VR and AR.

The lens works only with Canon's EOS R5, chosen for its 8K video capability. When shooting, it projects two circular images onto the camera's 45-megapixel sensor. It supports 190-degree capture, allowing for delivery of stereoscopic 180-degree 3D footage or photos at up to 8,192 x 4,096 (8K) resolution for AR or VR applications.

The lens has some unusual features, like a ring that focuses both lenses at once and an Allen screw adjustment that lets you tweak the focus of one lens to precisely match the other. Otherwise, you get features typically found in high-end Canon L RF mount glass, like coatings to control flare and ghosting, dust and water-resistant sealing and a solid F2.8 to F16 aperture range. Despite the odd looks, the lens is fairly compact and not much larger than Canon's 35mm F1.8 lens.

The lens is just one part of the equation, though. Canon is working on a firmware update for the R5 with new features to support the lens and EOS VR system. That includes MF peaking and manual focus confirm via Canon's Dual Pixel autofocus system, along with a "Magic Window" UI that helps users plan for delivery to different types of headsets.

In addition, Canon made its own EOS VR Utility and EOS VR Plugin apps, each available by subscription for $5 per month (with a free trial period). The VR Utility app flips the stereo images left to right and converts them from circular to an "equirectangular" square image that can be viewed on a VR headset. It also offers quick editing tools like trimming of clips and application of a LUT, while letting you change to preset resolutions and file types (DPX, Pro Res, H264, etc.) prior to export.

There's also the EOS VR plug-in for Adobe Premiere that "will convert the dual fisheye imagery to equirectangular, while allowing the ability to cut, color, and edit with the full control of Premiere Pro," Canon told Engadget. It also lets you export footage to the desired spec for different types of delivery.

On top of those apps, you'll be able to use the current Camera Connect app and Canon's EOS Utility to control capture. Both will be updated down the road to offer "remote control live view functionality for monitoring purposes while on-the-go," Canon said in a press release.

The system can be used for weddings, journalism, sports, training, events and more, while offering a number of advantages over current VR cameras. To start with, it's designed to deliver better quality than standalone VR cameras with smaller lenses and sensors like the $5,000 Insta360 Pro 2. At the same time, you get all the R5's tools like log shooting, RAW capture, 10-bit video and more. And when you're not using the VR lens, the R5 can be used for regular video production or photo shoots, unlike dedicated VR cameras.

At the same, the production process is simpler and cheaper than with dual cameras used in higher-end productions. Those cameras must be rigged, synced, focused and positioned correctly, with the end result being two files in many cases. Canon's EOS VR system, by contrast, delivers similar quality but offers focus and setup like a regular camera, while leaving you with a single file to edit at the end.

The entire system isn't exactly cheap, considering you need to pay $1,999 for the lens and $3,899 if you don't already have an R5 camera, for a total of $5,898. However, considering how niche and unusual the lens is, it costs less than I expected. There's also the issue of R5 overheating that limits 8K recording times to 20 minutes, with a 10-minute recovery period. You can improve that by capturing 8K to an external Ninja V+ RAW recorder, but that'll add $1,500 to your cost.

Still, it looks very promising for VR production, which has boomed in popularity during the COVID-19 pandemic (though still isn't exactly mainstream). It's been especially in-demand for business training and collaboration, a potentially rich vein for video producers. A lot of those folks, especially if they already have a Canon EOS R5, might be willing to jump into VR work if Canon's new system is as easy to use as it promises. The lens and EOS VR system are set to arrive in late December 2021.