That's all you really wanted to know, right?
Engadget

It doesn’t take long for Night City to feel like home.

The city is sprawling and spotted with neon, even when drenched in Northern California sunlight. Concrete roadways serpentine over the asphalt, sliding by staggeringly tall skyscrapers and discrete, busy alleyways. Sex shops, restaurants, bars and black market surgeons pack the streets, while a constant barrage of advertisements, gunfire and news reports echo between the buildings. At all hours, Night City pulses with life and threatens death.

V’s apartment is on the seventh floor of Megabuilding H10, a gray monolith in the center of downtown. Her unit is small but comfortable, with a sunken sitting area, bed, bathroom, desk, and weapons stash. But this isn’t what makes Night City feel like home.

What brings V’s world to life is the wide concrete walkway directly outside of her apartment, littered with familiar neighbors, vending machines and trash. It’s Wilson the weapons dealer yelling at V just before she reaches the elevator, every time, and it’s the building’s entryway packed with pop-up food stalls, including the booth where she and Jackie had ramen that one time. It’s the barrage of memories that accompany V as she walks under the bright pink lights of Jig-Jig street again, hunting another lead. It’s the language, steeped in the West Coast jargon of the year 2077: eddies, netrunner, ripperdoc, braindance, corpo rat, scsm, doll, biochip, shard.

The world of Cyberpunk 2077 is dense, seductive and dangerous. It’s also large — I received a PC review code on Wednesday, December 2nd, and I’ve clocked nearly 20 hours of gameplay. Considering some QA testers have logged 175 hours in the game without completing it, this isn't going to be a comprehensive review. It will, however, answer a critical question: Does Cyberpunk 2077 live up to eight years of hype?

Once it gets going, Cyberpunk 2077 is a living world filled with rich, relatable relationships and dramatic action sequences, all wrapped up in an ’80s-inspired vision of the future. At its core, it’s a work of transhumanist speculative fiction, presenting a timeline that could easily become reality based on humanity’s current trajectory. Corporations operate as gods, law enforcement and street gangs clash constantly in the streets, and everyday citizens have robotic limbs and data ports implanted in the backs of their heads.

Cyberpunk 2077 plays out like a lengthy sci-fi action film — specifically Blade Runner meets Old Boy meets John Wick. It’s a neo-noir adventure highlighted in pink and starring Keanu Reeves, and its main storyline tackles the nature of consciousness itself, in between trips to the sex shop. 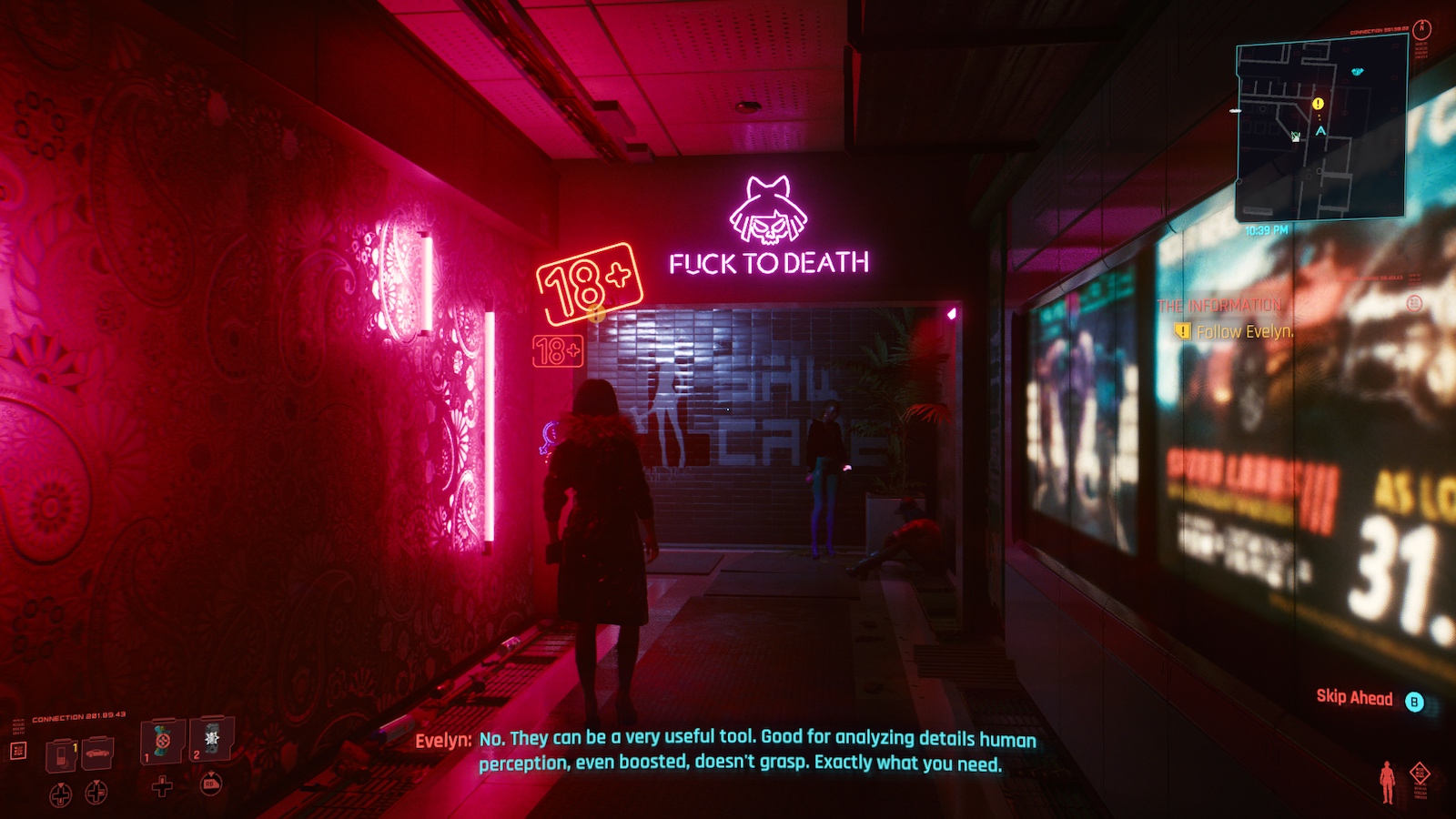 It all starts with character customization. You’ll pick a background for V — nomad, street rat or corporate shill — and then dive into an incredibly robust character editor, save for one feature. While you’re able to alter V’s appearance down to the freckles, nails and genitals, there are only two options when it comes to gender identity and voice acting: male or female. There’s no option for V to be nonbinary, responding to “they” or “them,” and this is an oversight in a work of speculative fiction. Nonbinary pronouns are common in mainstream consciousness even today, and it’s stubborn (at best) to imagine a future with cellular head implants, but without a more comprehensive understanding of gender identity.

This choice is especially egregious because Cyberpunk 2077 fetishizes ideas of gender fluidity elsewhere, namely in NPCs and advertisements. One common in-game ad features a feminine model with an obvious, large penis tucked into her leotard, standing next to the slogan, “Mix it up.” The poster is bright yellow and plastered all around Night City, despite the fact that developers at CD Projekt RED are aware that many fans find it exploitative and transphobic. Every time I see it in-game, I’m reminded of the studio’s easy dismissal of these concerns, and it leaves a sour taste in my mouth.

Exploitation and fetishization are two of the main themes of Cyberpunk 2077. Sex is a dominant industry in Night City, and while men are objectified in this world, there’s a clear emphasis on female nudity throughout the game. For the most part, this gaze feels authentic; it makes sense in a corporate-controlled universe dominated by power-hungry men in dark suits. In some cases, this dynamic is even beautiful.

In one scene, V meets up with Evelyn, a blue-haired mercenary in a short sequin dress, to discuss the details of a heist. They end up talking in a small, private room at the back of a night club, while a life-sized hologram of a naked woman dances on the table between them. Evelyn slinks around the dim room in red thigh-high boots, smoking and talking shop. Playing a female version of V, this scene is seductive and high-stakes, lingering on two women making calm decisions about who to kill, how and why. The hologram dances along with the muffled music from the club, and it all feels empowering and surreal. 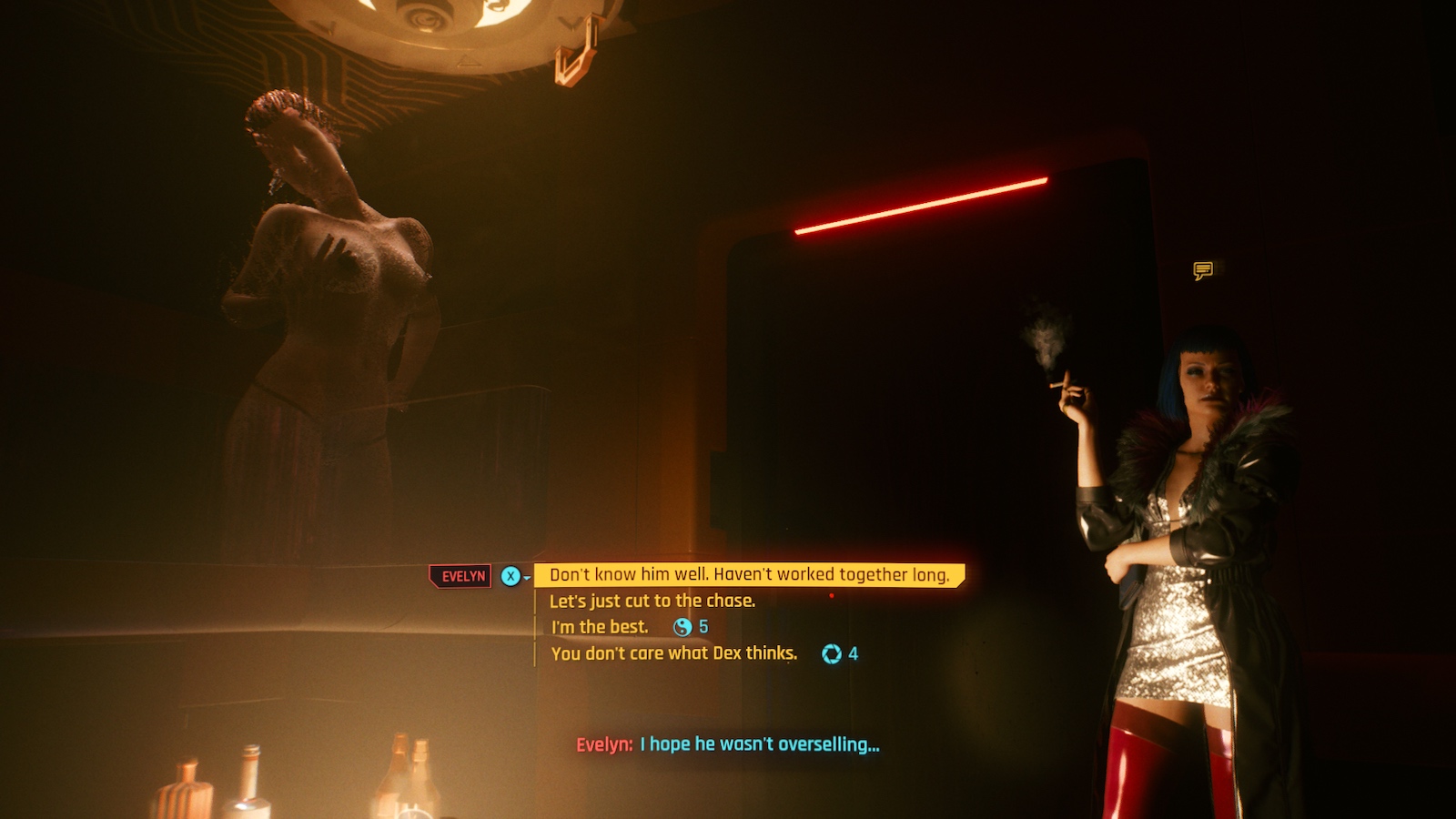 Gameplaywise, Cyberpunk 2077 relies on a combination of stealth, firearms and hacking to see V through dangerous missions in Night City. Stealth is my preferred mode of play, tip-toeing around sight lines, hacking into cameras and blinding enemies’ ocular implants from afar. There’s also a dense upgrade tree for V’s cyberware, plus crafting, driving, one-off challenges, side quests, and a ton of loot to collect.

Like, a ton. In my playthrough, the Cyberpunk 2077 title card didn’t show up until I was about six hours in, signaling the end of the prologue. During this time, I built believable relationships with a handful of characters, became acquainted with Night City, and completed a few main missions. And then Keanu Reeves showed up, and the real game started.

All products recommended by Engadget are selected by our editorial team, independent of our parent company. Some of our stories include affiliate links. If you buy something through one of these links, we may earn an affiliate commission. All prices are correct at the time of publishing.
Cyberpunk 2077
CD Projekt RED
feature
gaming